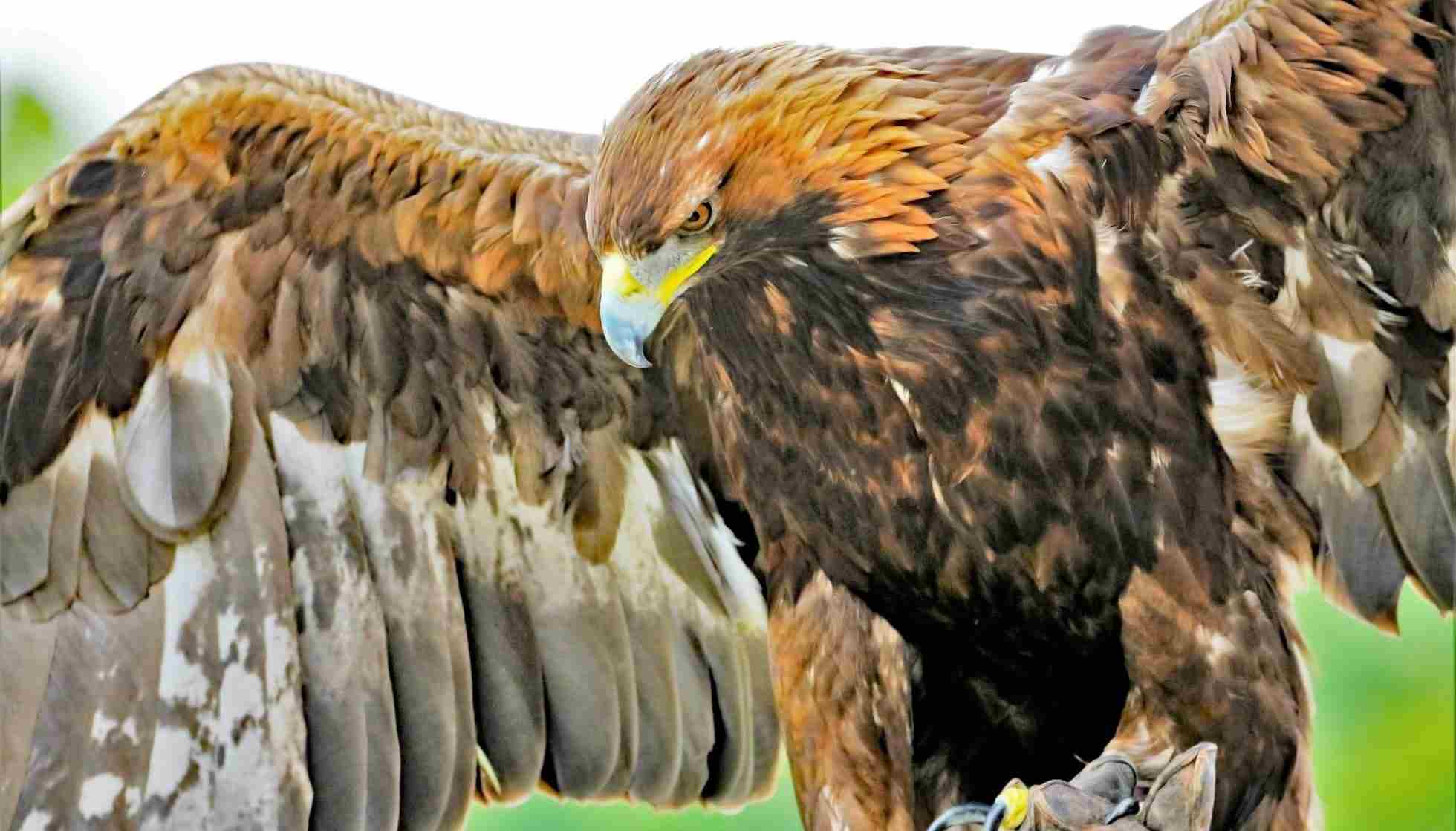 Here is the best bird guide to learn all about the majestic bird of the Northern Hemisphere, the golden eagle. Golden eagles are a bird species that belong to the species of kites, eagles, and harriers. Golden eagles are also known as the North American bird and can be found living in partially or wholly open countries, in and around hills, mountains, steppes, grasslands, and cliffs. Golden eagles are primarily spotted in western and eastern United States. They can also be spotted when they migrate south. Golden eagles are dark brown and have light gold feathers on their head and neck. They also have gray colored inner wings and tail. The average length of these birds is usually 33-38 in (83-96 cm).

It is known that a breeding pair of golden eagle birds form a courtship display, but these eagles, like most eagles, do not mate in the air. Mostly the copulation takes place on a branch or in the nest. Their litter size is generally around one to three eggs, although in rare cases, the female can lay four eggs. Both genders put their effort into nest building, incubation, and taking care of the chicks. They take turns to incubate their eggs, but unfortunately, only one to two young ones survive and fledge out in a time span of three months. The male eagle often helps the female by hunting food and water while still taking care of the eggs. Even the area where they are found building their nest is determined by how close they would be to food and water sources.

According to the IUCN red list, the conservation status of golden eagles is being declared as Least Concern. So they are free from the threats of becoming Extinct or Vulnerable. The current estimated population of golden eagles is between 170,000 and 250,000 individuals, whereas the total figure of breeding pairs falls in the range of 60,000 to 100,000. Continue with this bird guide to know more about these magnificent birds.

Here on our page, we have lots of interesting facts on golden eagles that everyone will enjoy. Let's have a look at these interesting facts, and if you do like these, then do read our birds of paradise and barn owl facts.

What type of animal is a golden eagle?

Golden eagles are a type of bird, and they belong to the species of kites, eagles, and harriers.

What class of animal does a golden eagle belong to?

The class of animals that a golden eagle belongs to is birds.

How many golden eagles are there in the world?

Where does a golden eagle live?

Golden eagles (Aquila chrysaetos) are also known as North American birds who live in partially or wholly open country, usually around mountains, hills, grasslands, cliffs, and steppes. They are also found living in various areas, including shrublands, tundra, farmland, the coniferous forests, and areas alongside streams and rivers. This species is usually spotted in North America and major parts of Mexico. Golden eagles are mostly spotted in the west of the United States, which is considered prime golden eagle territory. They are also seen when they migrate south.

What is a golden eagle's habitat?

Like most eagles, golden eagles, being a bird of prey, are seen from Mexico, North America and Alaska. Along with this, they are found in Africa, Asia, and Europe. The basic habitat of these majestic eagles are areas like the tundra, shrublands, grasslands, coniferous forests, farmland, and also areas along rivers and streams.

Who do golden eagles live with?

Golden eagles are often seen living with gatherings of other eagles or on their own but they are not seen mingling with other species of birds and animals. They are considered birds of prey, meaning they prey on most animals and reptiles. Golden eagles are often seen feeding on rabbits, marmots, ground squirrels, carrion, reptiles, birds, fish, and large insects. These golden eagles (birds of prey) can be seen all year round and are most active during the day.

How long does a golden eagle live?

The average golden eagle has a life span of around 30 years.

Adult golden eagles mating and egg-laying times are not fixed and may vary depending on the region. Usually, this eagle is known to be a solitary bird and would only tolerate their partner. They are also monogamous when it comes to pairing and mating. Unlike other eagles, their mating is not performed in the air, instead, they mate in their nests. Once the male and female birds have mated, the female lays eggs. The egg-laying takes place 40 to 46 days after the mating, and the litter size varies between one to three eggs. On rare occasions, the female lays four eggs. Both genders work together in the nest building, incubation, and taking care of the chicks. Both parents put in the effort to take care of their eggs over a period of three months, after which only two baby birds survive. The male eagle supports them by hunting and providing food for both the mother and the young chicks. Even the areas where they build their nest is very cleverly thought out by the parent birds.

According to the IUCN, the conservation status of golden eagles is being declared as Least Concern and are therefore considered to be free from the threat of becoming Extinct or Vulnerable. Their numbers are steady, and the current estimated population of golden eagles is between 170,000 and 250,000 individuals. The total figure of breeding pairs falls in the range of 60,000 to 100,000.

According to studies conducted at the Cornell Lab of Ornithology and various other institutions, it has been noted that there has been a sharp decline in the population of North American birds, and they even became Extinct from some parts of the world. There are some other species of eagles as well which exist in good numbers, such as tawny eagles, wedge-tailed eagles, and bald eagles. Their estimated population is similar to that of golden eagles (North American birds).

Golden eagles are dark brown in color, and they also have light golden-brown plumage on their head and neck, with a gray color on their inner wings and tail. The length of these birds has a range of 33-38 in (83-96 cm). These birds are seen flying high, soaring with their wings spread wide, lifted into a slight V shape. They weigh around 6-15 lb (2.7-6.8 kg). Golden eagles can fly high and reach speeds of up to 80 mph (128 kmph), and dive at speeds of 150 mph (241 kmph).

Golden eagles are not the typical cute birds that you'd like to pet. Instead, these birds are ones you'd see up in the sky and admire.

Golden eagles are seen communicating through a series of high-pitched sounds, including whistles and chatters. They communicate with their mating partner with the help of these vocal sounds and protect their nest and eggs from predators. They are often seen making these high-pitched sounds while hunting for food, especially when they are near their prey and want to signal to their partner that they have found food.

How big is a golden eagle?

How fast can a golden eagle fly?

How much does a golden eagle weigh?

They do not have a distinct name based on their genders.

What would you call a baby golden eagle?

A baby golden eagle is called an eaglet.

Golden eagle birds prey upon rabbits, marmots, ground squirrels, carrion, reptiles, birds, fish, and large insects. They are seen building their nests near places where they can easily hunt for food for themselves and their young ones.

Golden eagles have been declared the national bird of Mexico and yet are said to be strong enough to kill a man, although no such incident has ever been reported. While hunting, though, they do viciously attack their food. Golden eagles size and weight make it dangerous for their prey especially because their diet includes many weaker species of animals, and for that very reason they are termed as a bird of prey.

They are not made for being a good pet because they are adapted to living in an open environment in partially or wholly open country, usually around mountains, hills, grasslands, steppes, and cliffs. Keeping in mind the climatic conditions and the general surroundings that serve as an essential part of the golden eagles adaptations and habitat, they are unlikely to be kept as pets.

Mexico has deemed the majestic golden eagle as their national bird.

Which is bigger, bald or golden eagle?

Golden eagle vs. bald eagle: They both are around same size. Both males show similar characteristics, and they also belong to the same family of eagles. Their habitat is also mostly the same, and they prey upon the same food. In both categories, the partners take care of the young ones and have a similar clutch size of one to three.

What makes a golden eagle unique?

Golden eagles are dark brown and have a yellow beak with a talon that grows up to 3 in (7 cm) in size. They are without doubt the largest bird of prey in North America.

You can even occupy yourself at home by drawing one of our Golden eagle coloring pages.