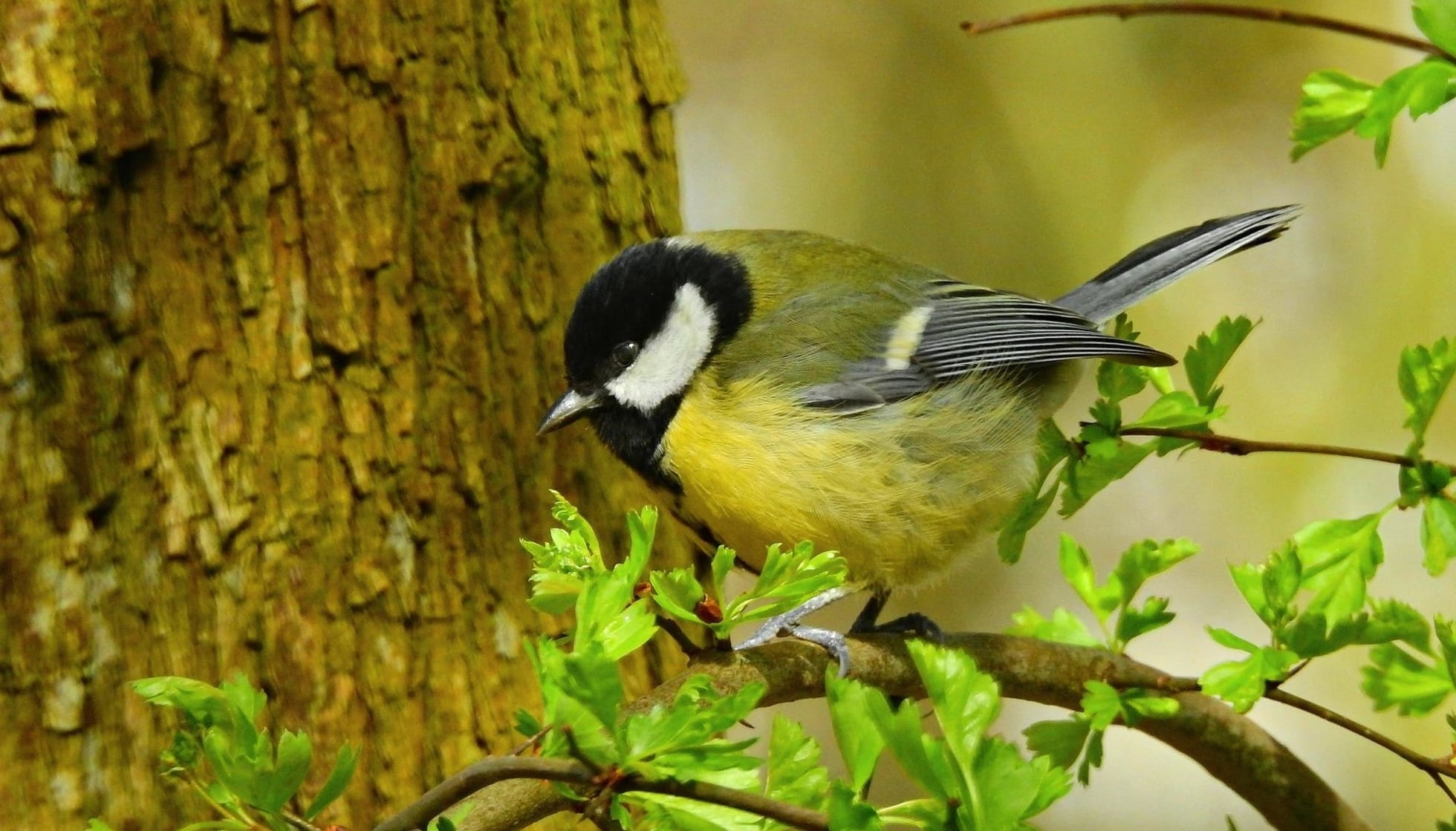 A small bird found in Central Asia and the Middle East, the great tit (Parus major) is widespread among Europe. Great tits are found in woodland parks and gardens. They have a bright-yellow colored breast, a bluish-grey back and tail, a black head, white cheekbones, and a black stripe that runs from bib to vent.

Great tits are the largest among the species of tit birds. They are about 12.5-14 cm in length. Although male and female great tits are similar to look at, the slight difference is that males are a bit brighter than females.

Great tits use a variety of songs; you can identify one by listening to the song and tune carefully. They produce a high-pitched bird song that sounds like a bicycle pump or 'teacher' call. Great tits also produce a melodic and happy 'teaa-cher teaa-cher' tune.

During the winter, they search for berries and seeds along with insects. As insects are scarce in the winter and when young ones hatch, parents look for caterpillars to feed them food that's rich in proteins and nutrients.

Here, we have many fun and interesting facts about great tits that you will enjoy. Let's look at these great tit facts and information, and if you enjoy these, do also read tawny eagle and tawny owl for more.

Olive and yellow body and a black-head

What type of animal is a great tit?

Great tits belong to the Paridae family and are a species of tit birds commonly found in the United Kingdom. It is a common bird in Europe and can be seen flying around in gardens, towns, near human-made birdhouses.

What class of animal does a great tit belong to?

Great tits belong to the class of Aves and are commonly found in towns and wildlife. They are one of the six species of tits located in the United Kingdom.

How many great tits are there in the world?

Around 300-1100 million great tits are alive in the world. They come under the category of least concerned species so they are not in any grave danger. Great tits are often hunted down by common house cats and may face habitat loss, but otherwise, they do not have any significant threats.

Where does a great tit live?

Great tits live in farmlands, parks, gardens, and woodland. They often use nest boxes made by feeders to rest. They are widely spread across Europe, Central Asia, and east, across the Palearctic to the Amur River, south to parts of North Africa, and in the Middle East.

What is a great tit's habitat?

The great tit habitat consists of wildlife, parks, gardens, and woodland. They're widespread across all of Europe and are often found in towns. They feed on insects such as cockroaches, crickets. And these can be found anywhere, so they do not require any special type of place to live.

Who does great tit live with?

Great tits are known to live in pairs and take care of each other. They often provide access to food for each other when one is hungry.

How long does a great tit live?

Great tits only have a lifespan of three years. Apart from natural causes, they face other threats such as cats, habitat loss, and other birds like the Eurasian Sparrowhawk and Great Spotted Woodpeckers.

Great tits reproduce after March in Europe. They are known to be seasonal breeders and are cavity breeders. The breeding process takes place in spaces inside trees or among rocks. Great tit nesting is preferred in nest boxes, and a female great tit lays around 6-12 eggs.

Great tits come under the status of Least Concern. Their total population is estimated to be 300-1100 million, and they do not face any immediate danger.

It has a light-lemon-colored breast and has green-colored wing coverts and a black head. Other parts of the wings are bluish- grey, even the tail is bluish-grey and has white cheeks. A stripe runs through the middle from bib to vent. Males have brighter and more vibrant colors as compared to females and small chicks.

Great tits are small and cute birds. They are domestic birds and are known to live in parks, gardens, nest boxes. They do not face any threat by humans, but cats are more violent towards them and have been the reason behind the deaths of many great tits.

Great tits usually communicate using a great tit sound, like 'spick' or 'chit'. They make a loud 'tink' to alert others or during territorial disputes. The great tit range is extensive, and these are vocal birds with a great tit call that can use up to 40 different types of songs and calls. Most of their bird calls are a variation of little peeping whistles and 'pinks'.

How big is a great tit?

The bird is 4.9-5.5 in (12.5-14 cm) long. As compared to a cockroach, it is approximately double in size. That is why it can easily prey on insects such as crickets, grasshoppers, earwigs, and cockroaches. Even though small in size, they are still the largest among their species.

How fast can a great tit fly?

Great tit birds are small and quick birds. They catch their prey swiftly and quickly, but their flight has not been measured yet, so we still don't know how fast they can actually fly.

How much does a great tit weigh?

Great tits are small and light birds. They only weigh around 0.03-0.04 lb (14-22 gm). They are lightweight and agile, which makes it easier for these birds to catch their prey. Their light weight and flexibility play a major role in their survival.

Males and females of the species do not have any different names. Males and females are differed by  slightly in their appearance. Both of them have the common scientific name that is Parus major.

What would you call a baby great tit?

Baby great tits are known as chicks. Great tits usually lay eggs inside trees or rocks, and chicks hatch anytime after 12-15 days. Great tit chicks are born without feathers and blind like all other species of tits. Both parents usually provide for their young ones for up to eight days after fledging, but they are also known to feed their chicks until they mature and can fly.

Great tits belong to the family of tits, and like other birds, they are insectivorous. Great tit food and the great tit diet consists of insects such as earwigs, grasshoppers, cockroaches, crickets, and ants. During winter, insects are scarce, so they feed on berries and seeds.

Great tits are aggressive birds during nesting and are generally protective. They often attack other birds over territorial disputes. Being the largest in the tits family, they are also seen killing other birds, breaking their skulls, and eating certain parts.

Great tits make great pets as they are used to living among humans. Great tits that live in the country's urban parts are more carefree, while birds living in the rural areas are notedly more aggressive and destructive. If you'd like to make a friend out of a great tit, then a good idea would be to place a bird feeder on your porch or anywhere outside for great tits to come and socialize. This is a great way to make birdie friends and observe and learn from them.

Carl Linnaeus named this bird the 'great tit' in 1758. After chicks hatch from their eggs during the breeding season, males help females in feeding the young ones.

These birds are known to visit bird feeders often. Great tit eggs are white with red spots in appearance and are laid inside trees or rocks in the wildlife and inside nestboxes in rural areas.

There are about 30 different variations of this bird, most of them black and greyish in color and lacking the bright-yellow breast of their European cousins. The great tit bird call is quite distinctive from a common bird. There's a good chance that if you hear an unknown bird call or sound, it is a great tit.

There are six other tit species at present in the United Kingdom.

Why is the great tit called great tit?

The great tit is called as such as the word 'tit' means small, and this bird is the largest among the various species of tits.

Adult great tits have a black-colored head with white cheeks, while blue tits have blue-colored caps. Like the great tit, blue tits also have yellowish-colored breasts, but their wings are blue instead. Blue tits are smaller in size and more common as compared to great tits.

Blue tits can fly up to speeds of 16 mph or 26 kph, while great tits and their flight have never been recorded. The blue tit is also more social than the great tit, as they are often seen in happy groups at feeders and mixers.

Here at Kidadl, we have carefully created lots of interesting family-friendly animal facts for everyone to discover! Learn more about some other birds including hornbill, or frigate facts.

You can even occupy yourself at home by drawing one on our great tit coloring pages.