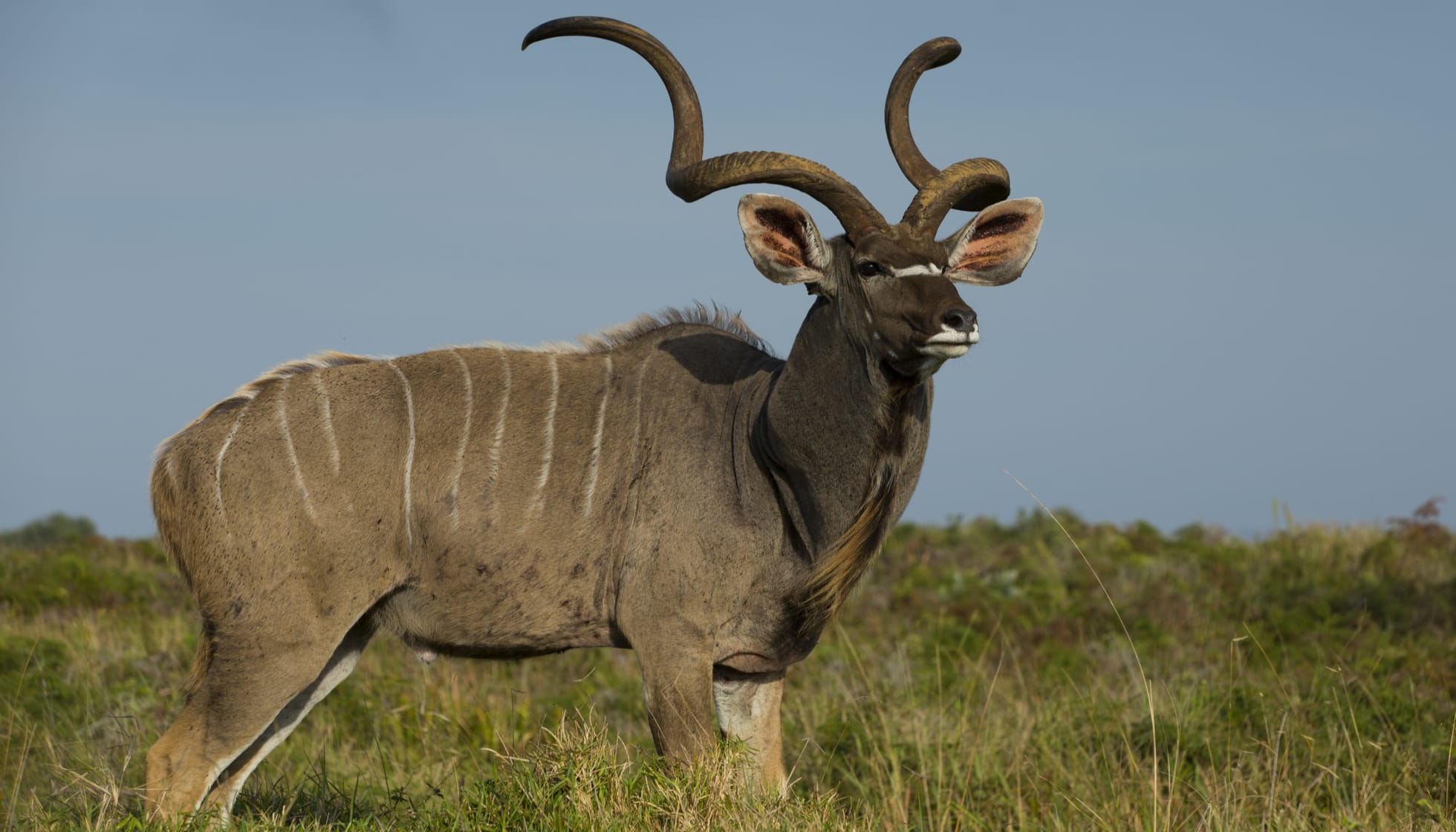 The Greater Kudu is one of the corkscrew horned antelopes found chiefly in eastern and South Africa. The Greater Kudu and Lesser Kudu are two species divided into three subspecies based on horn length, color, and stripes. They have large, broad ears with white hair and commonly have two and a half twists on their incredible horns. At two years of age, the first spiral rotation completes, and the whole two and a half twists are completed by the age of six. They take refuge in nearby water resources as they are good swimmers. They are active 24 hours a day. Herds tend to disperse during the rainy season as food availability is plenty. There is a massive demand for the fat-free meat of this animal.

To know more interesting features about this species, go through the content below. Refer to our articles on the kudu and nyala to know more about other antelope species.

What type of animal is a Greater Kudu?

The Greater Kudu is one of the big-sized antelopes with stripes on the body and is a commonly hunted species found in Africa.

What class of animal does a Greater Kudu belong to?

The Greater Kudu belongs to the Mammalia class.

How many Greater Kudus are there in the world?

A total number of 482,000 Greater Kudus are found over the world. Their population is widely found in South Africa (60,000) and Namibia (200,000). Their population is stable in protected areas and decreasing in private areas. They are considered to be under the Least Concern status.

Where does a Greater Kudu live?

This species is predominantly found in the African continent. They are located in Kenya, Tanzania, Ethiopia, Zimbabwe, Namibia, Angola, Zambia, and South Africa. They are also found in some parts of Uganda, the Central African Republic, Somalia, Chad.

What is a Greater Kudu's habitat?

It prefers to live in settled areas. Natural habitats of these species are mopane bush on lowlands, mixed scrub woodland acacia, bushes on abandoned fields, lowlands hills, and mountains. But humans are turning their natural habitat into farmlands, which is affecting their population.

Who do Greater Kudus live with?

Though male kudus are found in small bachelor groups, they are solitary species who prefer to live alone and mingle with female members only during mating season. Females live in small herds or small groups ranging from 6-10.

How long does a Greater Kudu live?

The life span of a Greater Kudu is generally seven to eight years in the wild and 23 years in captivity.

Greater Kudus adopt sexual reproduction. The kudus follow a polygynous mating system, where one male mates with multiple females whereas a female Greater Kudu mates with a single male. Generally, the kudus reach sexual maturity at the age of one to three. During the courtship, the males wait for the female's receptiveness. The mating takes place for one day, usually away from the herd. The gestation period is usually 240 days, and a female gives birth to calves when the grass is very high. Once pregnant, the female leaves the group and gives birth to a single calf, usually in the rainy season (January to March). The mother hides the calf in bushes to protect it from predators (African wild dogs, hyenas). By six months of age, the calf becomes completely independent.

The conservation status of Greater Kudus (Tragelaphus strepsiceros) is Least Concern. The Kudu is a common animal found in southern African wildlife.

The Greater Kudu is an antelope whose color ranges from reddish-brown to blue-gray. It has long legs, thin white stripes on the body, and a white chevron between the eyes. These South African animals have long, sharp, twisted horns with an average length of 120 cm. The head has a darker shade compared to the rest of the body. They are fascinating jumpers and can jump up to two meters.

Instead of considering them cute species, we can say these Greater Kudus are handsome species with fascinating horns and stripes and spots on the body. The safari hunters and wildlife lovers are great fans of these species.

These species are famous for their excellent vision and hearing skills. This quality helps them to be alert from predators nearby. They can smell the movement of predators from very long distances. They emit a loud barking sound to alert the group members. The markings on their body help them to camouflage from the predators.

How big is a Greater Kudu?

How fast can a Greater Kudu run?

The kudus run at a speed of 60 mph while trying to escape from their predators. Sometimes they stand motionless. This technique makes it difficult to spot this African mammal in the bushes.

How much does a Greater Kudu weigh?

Male Greater Kudus are called bulls, and female Greater Kudus are known as cows. Female and male kudus differ in physical characteristics. Compared to males, females are relatively smaller in size. Only males have corkscrew horns and beards. Females sometimes form larger groups, but they are temporary.

What would you call a baby Greater Kudu?

The babies of Greater Kudus are called calves. Once born, these juveniles are kept hidden in vegetation for few weeks to safeguard them from predators. This period is the most crucial time for the young ones to survive. By six months, the calves become independent while the younger female likes to follow the mother's herd.

Greater Kudus are herbivores. They depend on various food sources such as plants, leaves, flowers, fruits, shoots, vines, and grass. They may survive in areas with scarcity of water. In the dry season, they depend on food rich in water resources and moisture like watermelons, wild cucumbers. They change their diet patterns based on the seasons and have a greater capacity to survive without water for long periods.

Generally, Greater Kudus are not dangerous but may become aggressive if they are confined or caged. There are scenarios where the horns of contestants are interlocked, resulting in the death of both males.

These antelopes are generally huge and giant with spiral horns, so it may not be safe to adopt them as pets, and it may not be possible to create an environment that suits their survival.

In Africa, the Greater Kudu horns are used in making musical instruments; it is believed that the meat of this animal is also very good to have.

When in danger, these species freeze and stand still without any movement; it becomes difficult for their predators to spot them.

Their horns distinguish the male and female Greater kudus, and only male species have horns. The horns do not shed and continue to grow throughout their lifetime. It grows up to a maximum length of 72 in. These horns are hard and made up of Keratin attached to the skull.

Lesser Kudu vs Greater Kudu: Though both species have markings on their body, the Greater Kudu has a narrow body, patches on the cheeks, two full twisted horns,black-tipped tail with 4-12 white stripes, throat mane, whereas its cousin the Lesser Kudu has a broad chest, bushy white underside tail, and two and half-twisted horns that have 11-15 vertical white stripes. The throat mane helps to identify the species.

What does a Kudu symbolize?

The name kudu has been derived from the southern African language. It symbolizes strength, wisdom, and fame. Some believe they denote male potency, and their horns are believed to be dwelling places of spirits. The scientific name is Tragelaphus strepsiceros, derived from the Greek language. Tragos means a he-goat and elaphos denotes a deer, Strephis denotes twisting, and Keras means the animal's horn. These horns are widely used as musical instruments, such as the ritual horn shofar.

Here at Kidadl, we have carefully created lots of interesting family-friendly animal facts for everyone to discover! Learn more about some other mammals including the saiga antelope, or spiral-horned antelope.

You can even occupy yourself at home by drawing one on our antelope coloring pages.