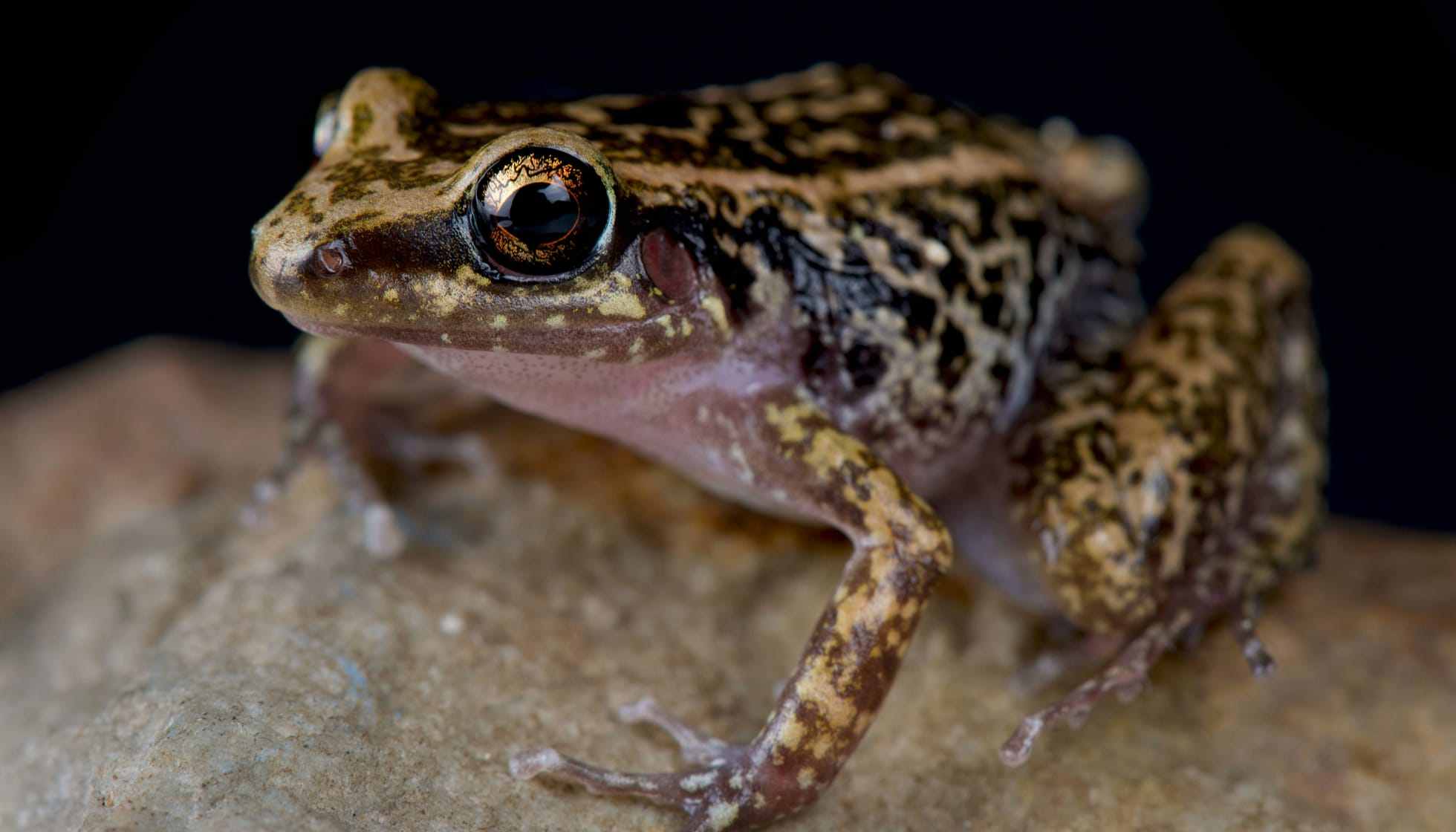 The greenhouse frog (Eleutherodactylus planirostris) is native to Cuba, the Bahamas, and the Cayman Islands and can be found seen in savannas, forests, grasslands, and scrubs. The greenhouse frog (Eleutherodactylus planirostris) was introduced to imported potted plants as a stowaway and hence its name greenhouse frog. They have also been introduced to the United States, Florida, Hawaii, and Mexico. Females tend to be larger in size as compared to males. They are mostly brown in color but may vary slightly and are also seen in reddish brown colors to bronze colors. Their colors help them to camouflage easily into grasslands or forests.

Cuba, The Bahamas, And The Cayman Islands

What type of animal is a greenhouse frog?

The greenhouse frog is a type of frog which belongs to the kingdom Animalia and order Anura.

What class of animal does a greenhouse frog belong to?

How many greenhouse frogs are there in the world?

The greenhouse frog's exact population is not known. They are classified as Least Concern by the IUCN Red List. They are found throughout different parts of the world to protect indigenous potted plants.

Where does a greenhouse frog live?

What is a greenhouse frog's habitat?

Who do greenhouse frogs live with?

Eleutherodactylus planirostris (greenhouse frog) live by themselves, meaning they are solitary. However, it is likely to spot more than one if you have spotted one in the same area. They are specifically active during the rainy season when they mate. They live with other amphibians and reptiles in the wild.

How long does a greenhouse frog live?

The Eleutherodactylus planirostris (greenhouse frog) exact lifespan is not known. A Maud island frog is the oldest frog in the world, aged 37, and resides in New Zealand.

Eleutherodactylus planirostris (greenhouse frogs) breed during the rainy season, spring and summer in the months of May to September. Males and female greenhouse frogs have various courtship calls. Post mating, female greenhouse frogs lay a clutch of 20 eggs. These amphibians lay eggs on the ground, unlike certain other frogs who lay their eggs in water bodies. Post hatching, the juvenile frogs develop independently, and the parents are not involved in raising the young. This is not the same for all species of frogs.

Greenhouse frogs are classified as a Least Concern species by the International Union For Conservation Of Nature (IUCN).

The greenhouse frog (Eleutherodactylus planirostris anura) is a small to medium sized frog. They are mostly brown to reddish-brown to bronze in color. Greenhouse frogs have a v-shaped band on their back. They have dark-colored eyes and four feet, two in the front and two at the back They don't have webbed feet, rather terminal toe pads. Female greenhouse frogs tend to be larger in size compared to male greenhouse frogs. This is primarily due to sexual dimorphism. Juveniles develop through a process of metamorphosis into fully functioning adults. The stages include an egg to a tadpole stage to finally an adult frog.

Greenhouse frogs are not cute, however, they are exotic beings and best observed in their natural habitat although it is hard to find them easily. Frogs and toads can be spotted in regions native to these invasive species.

The greenhouse frog sound is primarily heard during mating season when males call females. A greenhouse frog call is largely acoustic, visual, and through vocalizations. They have a U-shaped response to light. This native species perceives touch, unlike some other species which do not communicate in the same way.

How big is a greenhouse frog?

How fast can a greenhouse frog move?

A greenhouse frog moves at relatively moderate speeds. They mostly move at an average speed and rush only in rare instances. The Goliath frog can jump 10 ft (3 m) forward.

How much does a greenhouse frog weigh?

The exact weight of the greenhouse frog is not evaluated. The Goliath frog is one of the heaviest frogs and can weigh up to 7.2 lb (3.3 kg).

Males and females of this species are not addressed differently. Females tend to be bigger in size compared to males, and they differ in reproductive functions. Parent greenhouse frog care is absent in this species.

What would you call a baby greenhouse frog?

A baby greenhouse frog is a froglet. Males and females of this species give birth to up to 20 eggs per clutch. The froglets develop and learn to live independently. Eggs are laid in the ground on wetlands where they are covered with mud. The froglets develop through a transition of metamorphosis and transition from eggs to tadpole stage into adults.

This frogs species is carnivorous and feeds primarily on insects. They feed on beetles, spiders, ants, and earthworms. They are an effective insect repellent and are seen in gardens during the rainy season. Predators of this species include brown tree snakes, snakes, herons, and birds.

No, this frog species is not poisonous. They are not harmful to humans but can affect insect populations. Tree frogs are considered to be poisonous and it is best to maintain a distance while observing them. Tree frogs are natural and bright in color which is attractive in appearance, however, they should not be touched.

Frog species are adopted as pets by many frog lovers, however, it's best to adopt species native to one's region. Adopting non-native species might require special permission. Greenhouse frogs are not usually adopted as pets, so it's essential to ensure the legalities related to owning such frogs in your region. They thrive best in their natural habitat. Tiny froglets are seen in natural water bodies. In this species, the eggs hatch into frogs.

Adopting them as a pet is essential to ensure that they are kept in a gallon tank with ample humidity and temperature. If they are kept in tanks, they should at least have a large bowl they can soak themselves in.

Spraying a frog with citric acid helps to get rid of them. Citric acid is capable of killing frogs if sprayed directly at them and acts as a natural repellent.

Frogs don't drink water instead, they absorb it through their skin. They live in humid climates at most times. Frog skin is considered to be a determining factor in evaluating ecosystem overall health.

In Egypt, frogs symbolize life and fertility. Goddess Heget is a frog goddess who represents fertility.

Yes, these frogs are an invasive species. The process includes taking native species and introducing them into a different habitat. Initially, these frogs were seen only in Cuba, the Bahamas, the Cayman islands and the Caribbean islands, but later they were introduced to places like Florida and Hawaii. They spread easily and in large numbers without much effort. These frogs could feed on indigenous insects which could make certain species reach the verge of extinction.

What is the greenhouse frog's life cycle?

These frogs lack a larval stage unlike other frog species and emerge as small-sized frogs from their eggs. This is a feature that is species-specific. These frogs live close to tropical plants and lay eggs on land and not in shallow water like other frog species. The small frogs develop into adults by themselves. Have you ever come across a greenhouse frog? If not, visit regions endemic to this species, like Florida, Hawaii, and other similar places, and look under tree logs.

Here at Kidadl, we have carefully created lots of interesting family-friendly animal facts for everyone to discover! For more relatable content, check out these Chinese giant salamander facts and bullfrog facts for kids.

You can even occupy yourself at home by coloring in one of our free printable fat frog coloring pages.

Thank you to Kidadler Louis Robertson Jr. for providing the image of a Greenhouse Frog in this article.