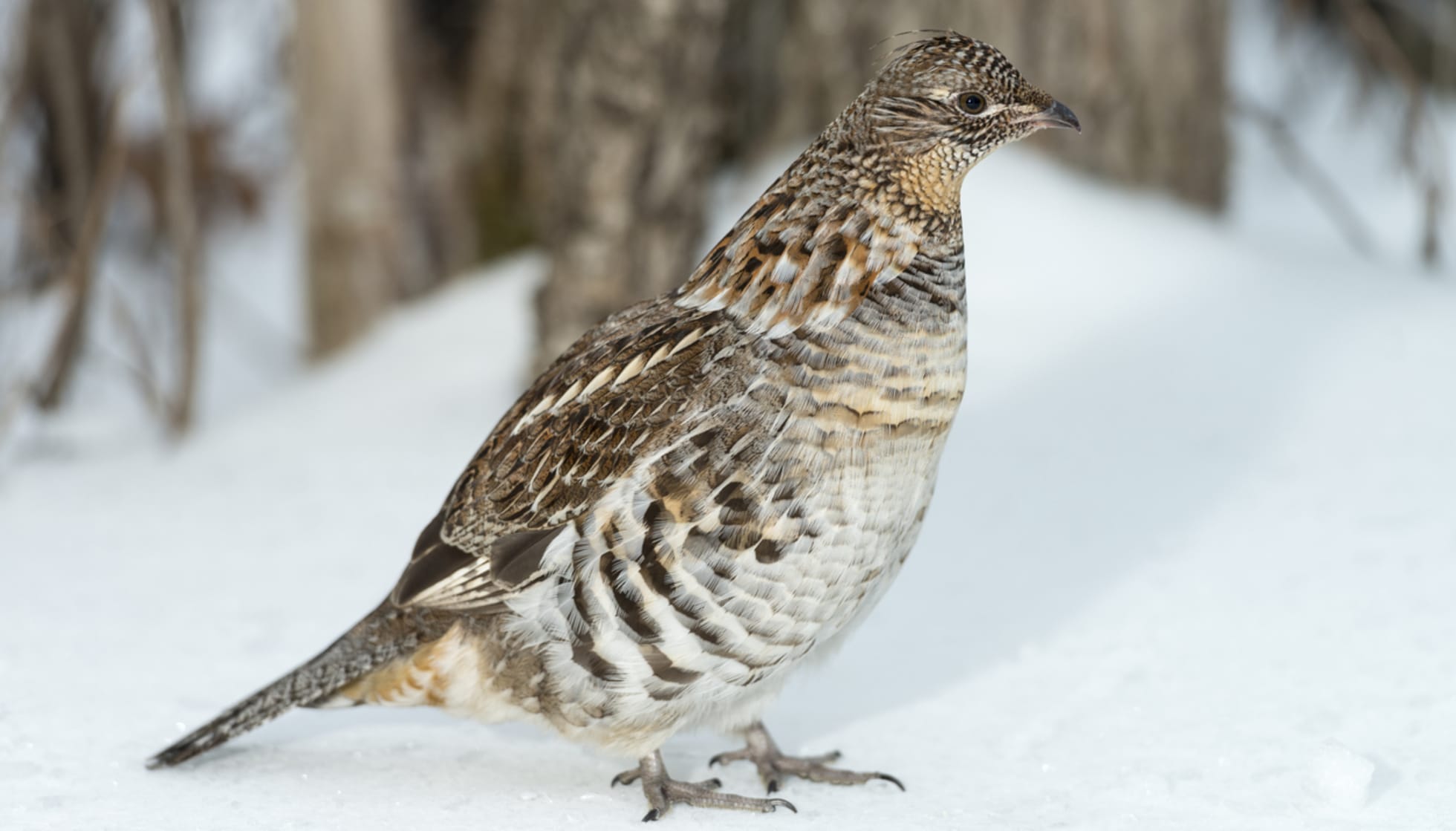 If you are fascinated by birds and animals in the wild then you must already be eager to know more about grouse. In this article, you will find all that there is to know about this game bird.

Grouse is a game bird that belongs to the Phasiandie family. It is not your normal chicken since it belongs to a different family of birds. Ruffed grouse bonasa umbellus, as it is scientifically called, is one of the popular and well known types of this species. These types of birds are mostly found in the snow of cold North American regions like Canada, as well as in the arctic and sub arctic regions of the northern hemisphere. Blue black and white is the normal color of these birds, there are also certain species that are brown in color. Certain variations in the color have been observed. Grouse is extremely protective about it's territory, its eggs and the family nest. This makes it an aggressive bird when in foreign contact. For this reason, it does not make a good pet. It is spelled as grouse and not 'grous' or 'growse'. In this article we will define grouse and it's characteristics. Here you will find answers to questions like 'what is a grouse' and 'grouse definition' or 'grouse meaning'.

Least concern and Near Threatened

What type of animal is a grouse?

Grouse is a type of game bird. They belong to the order galliformes. They are known to belong to the sub family of Tetraonidae within the Phasianidae family.

What class of animal does a grouse belong to?

Grouse belongs to the class of birds.

How many grouse are there in the world?

There are six types of grouse in North American sub continent. The ruffed grouse and spruce grouse happens to be the most common among all the subspecies.

Where does a grouse live?

Grouse lives in the arctic and subarctic regions of the northern hemisphere. They also live in the territory of deciduous forest and the tundra regions in the south.

What is a grouse's habitat?

Grouse tends to inhabit the colder regions of North America. Places where the grouse inhabits include the northern regions like Greenland and Canada in extreme winters. Some of them also reside in Texas in North American forests.

Who do grouse live with?

These birds are normally solitary and prefer to live alone. They do flock with birds of other species in winter in order to find spots in the forest where they can get food.

How long does a grouse live?

The maximum life span of a grouse is up to is nine years. In the forest, they do not necessarily live till that age because of threats from predators and climatic conditions. In captivity, they can get the necessary medical attention and food, allowing them to live longer.

There is no specific season that the grouse prefer to mate in, they do so throughout the year. The males are polygamous in nature and entice females through their actions. The species have their own ways of expressing their desire to their counterparts. Some of the gestures include showing their colored sacs or combs. Certain actions like the fluttering of wings and rattling the tails are used to convey the same. The males also make use of a drumming sound to tell the females that they want to mate. In some cases the females of the species make the males fight in a display of power to choose a suitable mate for her. After mating, the female lays around 5-12 eggs. The incubation period stands at around three to four weeks. Once the eggs hatch, the females have the responsibility to look after the young ones. In around two weeks the young ones leave the nest and are able to fly on their own.

Grouse living in the north have declined in number due to the loss of habitat and forest cover. The tundra species of the south on the other hand have a healthy number. Popular game birds like ruffed grouse and red grouse have benefited from habitat management. IUCN has listed many grouse birds as near threatened. Ornithologists across the world are working with several social organizations towards bird conservation and keeping up the population of grouse.

The grouse is normally blue-black in color. They also have white wings and covers under the tail which curls outwards. In the upper mid west, around 58 variations in the color of their tails have been found. Their feathers are brown or grey and sometimes even show shades of red. They are covered with various spots and bars. Their legs are covered in feathers completely all the way down to the toes. In winter the  feathers and small scales on the sides help them for walking on snow and also for the purposes of burrowing while making their shelter. Unlike other Galliformes, they have no spurs.

The colorful patterns over the body and the tail as well as the feathers make the grouse look very appealing. Especially the newly hatched chicks in the nest look extremely cute with their colorful appearances.

Grouses have a way of communicating through a drumming sound and fluttering their wings, rattling their tails. They even make loud voices in case they sense danger. Struts, hissing with tailed cocked up are some of the ways to convey courtship.

How big is a grouse?

How high can a grouse fly?

Grouse cannot fly long distances and are known to fly a quarter of a mile per day at an elevation of 4000-9000 feet. They mostly fly closer to the ground. Grouse generally flies at speeds from 20-70 miles per hour.

How much does a grouse weigh?

There are no different names given to the males and females of this species individually.

What would you call a baby grouse?

Baby grouse is called a chick. A flock of them is also known as a thunder of chicks or thunder of grouse.

It is the duty of the male grouse to gather food. Grouse mostly prefers eating berries, fruits, seeds, and buds across the majority of the species. Some of them also eat small insects in the forests.

Grouse mostly stay quiet, but they do produce sounds when communicating. Hissing or squealing are the most common sounds in order to communicate with each other. They generally talk while gathering the food or when they see some predators in the area. Their squeals tend to get loud when there is some danger sensed around.

Grouse do not make good pets. They are birds that belong to the wild. They love their solitude and tend to be quite fearful and flighty with unfamiliar surroundings. It is said that in some places like Canada it is illegal to own one as a pet, and it is illegal to own some specific species as well.

Most of the grouse hardly live for over a year due to external threats to the birds and the eggs. These include hunting and attack by other larger predators living in the territory. Improper incubation sometimes does not allow the eggs to hatch. More often than not medical ailments and not getting proper medical cover in the wild forests are common reasons for the bird and its chicks not surviving till its old age. Grouse is also used as slang that means 'awesome' in Australia.

When can you hunt grouse?

Grouse is said to be delicious and is considered good to eat, thus hunting is a common practice. Since the grouse leave a scent behind, the hunters make use of this to trace the bird. They gather their food in the early mornings and hence that is the time when the hunters are active. Hunting grouse without dogs is tough since dogs will be able to figure out the scent better owing to their highly developed olfactory sense. In some regions, you must take HIP certification and also follow the regulations of hunting to be able to hunt them.

How many species of grouse are there?

There are an estimated six types of grouse found in the snow of the northern hemisphere and typically the north American regions like Canada. Ruffed grouse bonasa umbellus is the most common of the species. Some of them also find their habitat in the territory of deciduous forests and tundra regions of the south.

Here at Kidadl, we have carefully created lots of interesting family-friendly animal facts for everyone to discover! You can even occupy yourself at home by drawing one on our grouse coloring pages.