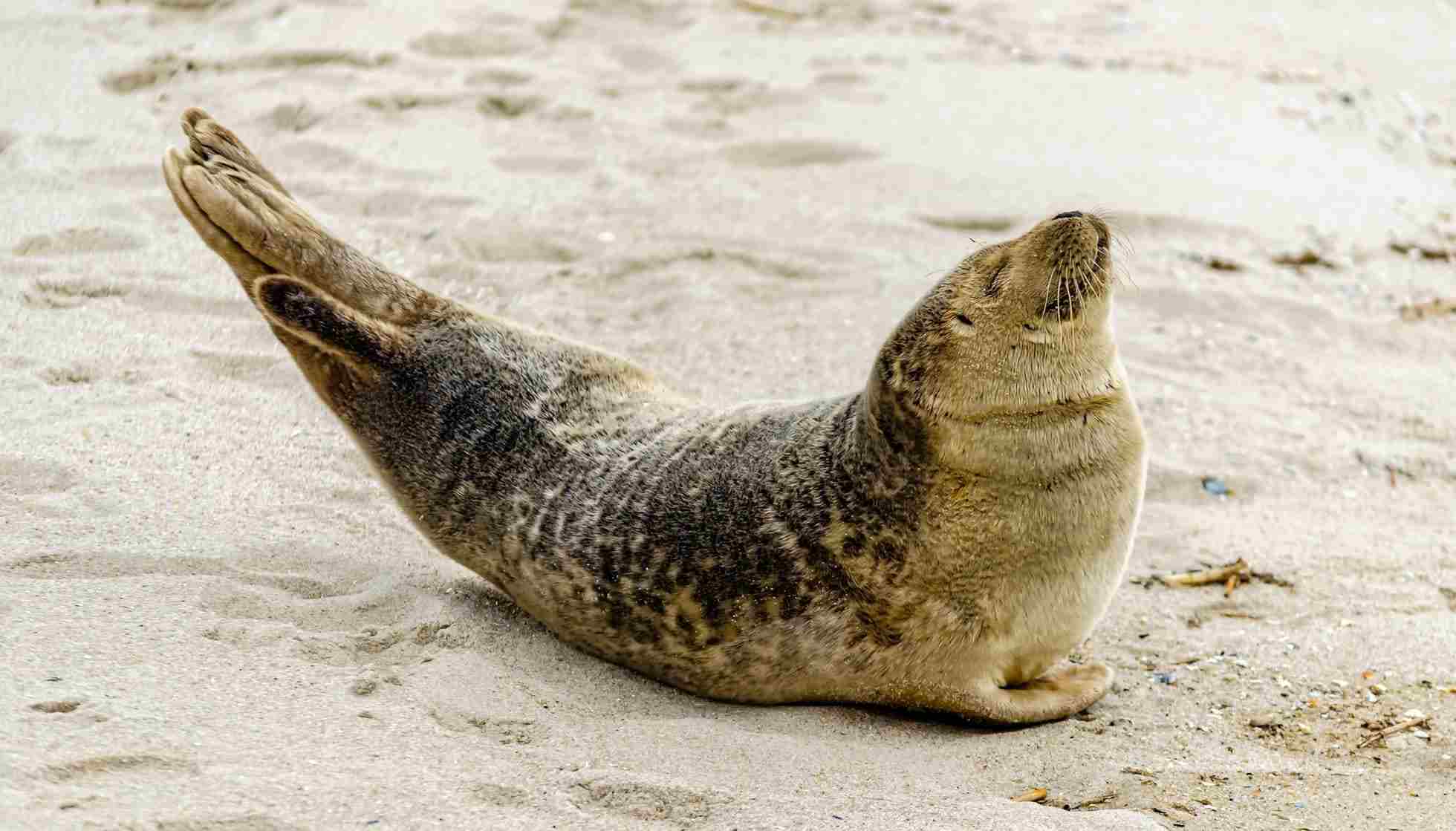 Harbor seals or common seals are some of the most known marine animals. Harbor seals (Phoca vitulina) can be seen resting on the rocks or floating on ice in glacial fjords with their heads and rear flippers elevated in a banana-like position. They are regarded as the most wide-ranging pinnipeds in the world. Pacific harbor seals have a unique pattern of spots on their back which could be dark spots on light skin or vice versa. The harbor seal has brown, silver-white, tan, or gray-colored skin. These pinnipeds have distinctive V-shaped nostrils. The body and flippers are short, and their head is rounded. Pacific harbor seals do not have pinna or ear flaps. There are five subspecies of harbor seals which are Eastern Atlantic common seals, Western Atlantic common seals, Ungava seals, Pacific common seals, and Insular seals. Before 1960, the state of Washington and Oregon financed bounty hunters to hunt the common seals as they were considered competitors to fishermen while fishing.

The harbor seal comes from a family of the true seal family. Pacific harbor seals have a layer of Blubber under their skin to help them regulate their body temperature. The harbor seals can dive up to 300 feet and stay submerged for almost 30 mins. Pacific harbor seals have better sight underwater than on land. They are marine mammals of eastern North Pacific and Arctic oceans. Harbor seal population faces threat from predators like sea lions, sharks, walrus, ravens etc. This marine mammal can see underwater in darkness too. You may also read Amazon River dolphin and Spinner dolphin to know more about these beautiful aquatic creatures.

Temperate And Arctic Marine Coastline Of The Northern Hemisphere

What type of animal is a harbor seal?

The harbor seal (Phoca vitulina) is a kind of seal. The harbor seal is a part of the true seal family as it doesn't have a rear flap. Pacific harbor seals are one of the most popular and widely distributed species of pinniped. The other pinnipeds are walruses, eared seals, and true seals.

What class of animal does a harbor seal belong to?

The harbor seal belongs to the mammal class of the animals as it gives birth to offspring like other mammals. Harbor seal pups are able to swim within hours of being born and can often be seen resting along the coast and sandy beaches. The pups weigh between 8-26 lb when at the time of birth.

How many harbor seals are there in the world?

The population of harbor seals in the whole world is 350,000-500,000. The local population in many places has declined due to a disease called phocine distemper virus. Around the San Francisco Bay area, harbor seals often have a reddish tint on their coat due to deposits of iron oxide.

Where does a harbor seal live?

Harbor seals are found in the coastal waters of the Northern America, Europe, and Asia. They can be found on the east and west coast of the United States. Pacific harbor seals are also found around the North Sea and the Baltic sea. Also around the coastal waters around islands of Greenland, Hokkaido, the United Kingdom, Norway, and Canada. Their populations can also be found along Atlantic and Pacific Oceans.

What is a harbor seal's habitat?

Who do harbor seals live with?

The harbor seals are loners. They are known to haul out in groups. But they cannot touch each other or stay closer to each other while they haul out. This marine mammal finds it irritating to be touched by other harbor seals, as they react negatively to it.

How long does a harbor seal live?

The mating season for harbor seals runs from spring to fall. The harbor seals reach sexual maturity by the age of three and seven years. The male harbor seal may mate with more than one female. Female harbor seals give birth once a year after a gestation period of around nine months. Their courtship and mating happen underwater. In contrast, birthing happens onshore. The mothers are the sole providers for the baby harbor seals. For breeding, the males may gather underwater and turn on their backs, put their heads together, and vocalize to attract females for mating. When the adult females give birth to single pups, the pups are born well-developed and can swim immediately at birth. The harbor seal pups are known to double their weight by the time of weaning. After giving birth to the pup, the harbor seals are known to come onshore for molting.

The conservation status for harbor seals is of the least concern. Abundant population of these pinnipeds can be found in the Atlantic and Pacific Oceans. However, human intervention and killing of seals as this marine mammal was believed to compete with humans for fish-eating have led to declining in harbor seal populations in many areas. They also face threat from predators like killer whales, sea lions, walrus, ravens etc. On the Norwegian coast, harbor seal pup get killed as bycatch. Natural habitat degradation and encroaching on their hauling spots could also lead to their numbers declining. This is the reason that their hunting was made illegal by the U.S. Marine Mammal Protection Act in 1972 and in Canada by the Fisheries Act of 1970.

As per appearance description, harbor seals are easily recognized and one of the most famous semi-aquatic mammals on the earth. These pinnipeds are found lazing on the northern hemisphere coasts of many islands. Or even on a floating iceberg. They have distinct V-shaped nostrils with a short flipper and long body like a banana. Their eyes are rounded and black mostly. They have small holes for ear canals without any ear flap on a round head behind their eyes. Since these pinnipeds do not have legs, they are known to bounce and display caterpillar-like motion.

Harbor seals are considered cute and gregarious animals. But they love to live by themselves and should not be disturbed as they may get scared or turn aggressive. These pinnipeds have a waterproof fur body which may have dark spots on light-colored bodies or light spots on dark-colored bodies.

Harbor seals are not known to communicate a lot. They communicate underwater to defend their territories, especially males do so and as a show-off to females who are traveling through the area. The underwater voice is described as a roar. They may also bark, tonal honks, grunts, roars, or moan and also make harbor seal pup contact calls.

How big is a harbor seal?

Harbor seals are known to have a big round head with a shorter body and short limbs. They are shorter in comparison to other seals. But they can grow to an average length of more than six feet.

How fast can a harbor seal swim?

The harbor seal swimming speed is around 12 mph. But they are known to cruise at a much lower speed. They rarely swim backward. They can swim forward or upside down.

How much does a harbor seal weigh?

The harbor seal range of weight can vary between 120-370 lb. The newborn baby harbor seal may weigh between 8-26 lb.

What would you call a baby harbor seal?

Harbor seals can eat fishes like cod, herring, mackerel, salmon, hake, and flounder. They may also eat squid, clams, octopus, crayfish, crab, and shrimp as part of their diet. The harbor seal diet volume is around 5-6% of their body weight every day. Adult harbor seals may swallow their prey whole or tear them into pieces. Harbor seals feed at high tides and rest at low tides.

Like all intelligent marine mammals, the California harbor seal can be friendly or prefer to stay alone. Some are playful, curious, and friendly, and some prefer staying by themselves and don't appreciate being disturbed. The younger harbor seals may be curious therefore more friendly. As they age, these marine mammals may be less playful and friendly.

California harbor seal would make a good pet, as they do not require much care. If we give  eastern North Pacific harbor seals their natural habitat and approach them with caution, they can be great friends. But it is important for every animal to stay in its natural habitat, and care must be given to protect it. Harbor seals are known to be lonely creatures, and constant human interference at their hauling places has created issues for them.

Harbor seals can sleep in water by taking a position known as bottling, where all its body except the head remains underwater.  They move their whiskers or vibrissae back and forth in a sweeping motion underwater to locate food. Their vibrissae may also guide them if any harbor seal predators are around.

Ungava seals only live in lakes and rivers in Northern Quebec, Canada, that drain into the Hudson and James Bays.  they are also listed separately as Endangered.

Harbor seals can live in fresh and saltwater. They breathe out before diving, using the oxygen in their blood and muscles while diving. Their heartbeats gradually lower down to 10 beats per minute from 100 beats per minute.

Mother harbor seals leave pups to fend for themselves after the first month. It doesn't teach the little one to hunt. They learn on their own.

Seals share a common ancestor with dogs and bears. They have their upper and lower arms and legs concealed within their body. Only their hands and feet extend outside from their body.

When you compare the harbor seal vs sea lion, then it can be safely stated that the sea lion would certainly win the contest as it preys on harbor seal.

Harbor seal skeleton resembles that of a big basset hound with the harbor seal skull being the strongest part of the body.

How wide a territory does a harbor seal normally live in?

Harbor seals are known to spend their entire lives in an area of about five miles. Sometimes they may spend several days traveling up to 33 miles in search of feeding grounds. And may swim upstream in freshwater for almost 100 miles in search of fishes like shad and salmon. But they always come back to their regular resting places.

How are harbor seals adapted to their habitat?

Harbor seals have adapted well to ocean life, with spending 50 percent or more time onshore too. Their whiskers help it to hunt and navigate by sensing pressure waves from fish and underwater objects. Their clear and crisp eyes allow them to see in dark, deep water. Their long necks enable them to shoot out quickly to catch fish while swimming. They have thick neck physiques with interlocked vertebrae which supports them to be strong and flexible. This helps them surf the waves and navigate ice and rocky shores.

Here at Kidadl, we have carefully created lots of interesting family-friendly animal facts for everyone to discover! Learn more about some other mammals including harbour porpoise, or hammerhead shark.

You can even occupy yourself at home by drawing one on our harbor seal coloring pages.