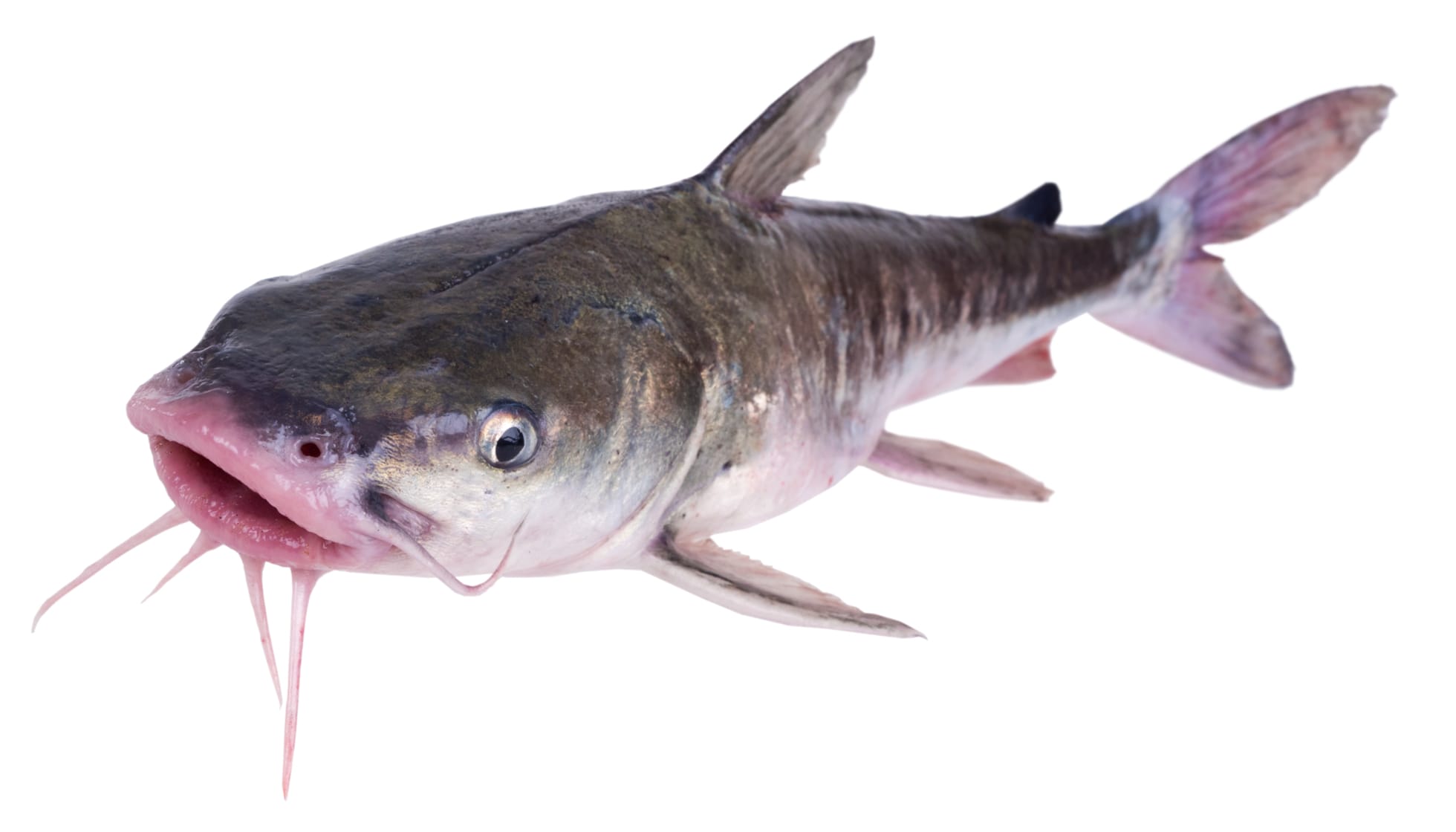 The hardhead catfish (Ariopsis felis syn. Arius Felis) is quite a well-known species of fish due to its unique appearance. Hardhead catfish are a common sight in marine aquariums and people's tanks at home. It belongs to the Ariidae family of fish, which is a group of sea catfish, also called marine catfishes. As the name suggests, unlike freshwater catfish, marine catfishes live in saline seawater or brackish water. Brackish water is a type of water that is less saline than seawater, but more saline than freshwater; an intermediate of sorts. These saltwater catfish known as Arius felis are almost wholly endemic to the United States and Mexico, off the coast of Florida and in the Gulf of Mexico, where it lives alongside the Gafftopsail catfish. They enjoy eating virtually anything around them, including shrimp, sea waste, smaller fish, crabs, invertebrates, and more. This species of saltwater catfish got its common name due to the presence of a rigid, bony plate that extends to just above its tail fin (dorsal spine) starting at its eyes. This plate constitutes a considerable amount of its weight. The hardhead catfish is often mistaken for the gaff-topsail catfish (Bagre marinus) due to its similar appearance. However, on closer inspection, the two species become distinct: while the gaff-topsail catfish has extremely elongated dorsal and pectoral fins that resemble a ship's sail, this feature is not present in the hardhead catfish.

If you enjoyed reading up on this particular sea catfish, don't forget to check out our facts pages on the Wels catfish and the Channel catfish.

Gulf Of Mexico, The Florida Keys

What type of animal is a hardhead catfish?

The hardhead catfish is a type of fish.

What class of animal does a hardhead catfish belong to?

The hardhead catfish is classified as Actinopterygii, a class of fish.

How many hardhead catfish are there in the world?

While the exact number of hardhead catfish in the wilds is unknown, they are considered to be common and abundant in their habitat of the Gulf of Mexico and the Florida Keys.

Where does a hardhead catfish live?

The hardhead catfish is found mostly in seawater and brackish water, and rarely ventures into freshwater.

What is a hardhead catfish's habitat?

The hardhead catfish is seen around shallow waters of the Western Atlantic Ocean. The species may also inhabit estuaries and river mouths.

Who do hardhead catfish live with?

In the wild, hardhead catfish are usually found in schools or shoals. However, they get along with most other species of fish when kept in an aquarium together, but will invariably see smaller fish as food.

How long does a hardhead catfish live?

The hardhead catfish usually lives for around five to eight years.

Like other species of fish, the hardhead catfish too reproduces sexually. Breeding season is May to September every year, which is when females develop fatty tissue around their pelvic muscle, near the dorsal fin. Both copulation with the male and, consequently, fertilization occurs here. Once the eggs are ready to leave the mother's womb, she lays them in their father's hardhead catfish's mouth. He then performs what is called mouth-brooding, a system of parental care for fish eggs. The eggs are safe in their father's mouth from larger fish predators. The unviable eggs attach themselves to the viable ones and may be used as a source of food for the male, who does not feed during the process of mouth-brooding the eggs. Species of fish that do not lay a lot of eggs at one go prefer this method of parental care due to the increased chances of their offspring reaching adulthood.

According to International Union for Conservation of Nature (IUCN) Red List of Threatened Species, the hardhead catfish is a species of Least Concern, meaning it is abundant in the sea.

Unlike most species of fish, the hardhead catfish does not have scales on its body, but its dorsal and pectoral fins feature serrations and mucus-covered spines, offering protection against predators and anglers alike. Just like a dog's tail, the dorsal spine of a hardhead catfish is erect when it is excited. At other times, the dorsal spine sits relaxed. Their body is usually gray on the entire top side of the dorsal fin and white on their underbelly. As with all catfish, they have six whiskers (barbels) around their mouth. These barbels are the root of their common name "catfishes" since they are reminiscent of a cat's whiskers.

Hardhead catfish, despite not having a lot of vibrant coloration, is definitely seen to be cute fish. This may be attributed to their barbels, making them akin to a cat, borrowing some of its cuteness.

Hardheads have a very complex system of communication. Firstly, they can use chemical distress signals to let other hardheads in the vicinity know they are injured: this is a feature not usually seen in sea catfish like the spotted sea catfish, but instead in freshwater catfish like the Mekong giant catfish. They also emit low-frequency low-amplitude sound waves to probe their surroundings and avoid obstacles. In this regard, the hardhead catfish is once again unique, since this feature is extremely rare among other inhabitants of the sea. Finally, they can also use their body to produce sounds for all in the sea to hear. They can grind together their pharynx teeth, or their pectoral spines and pectoral girdle to produce sound. Additionally, they also have specialized sonic muscles between the air bladder and their pectoral spines. Clearly, there are several adaptations in its body dedicated to communication!

How big is a hardhead catfish?

Hardheads usually grow to a length in the range of 10-12 in (25-30 cm). At this length, they are more than double the size of a cory catfish, and less than half the size of a blue catfish.

How fast can a hardhead catfish swim?

While the exact speed that hardheads can hit in the wild is not known, the average swimming speed for a catfish is around 2.6 mph (4.2 kph).

Both male and female hardhead catfish are referred to by the same name.

What would you call a baby hardhead catfish?

The young of this species could be called hardhead catfry or hardhead catfingerlings, these are broad terms used for all baby fishes.

Hardheads are opportunistic predators and will hunt and gulp down practically anything in their environment. Most often, they feed on smaller fish, invertebrates, crabs, detritus, and shrimp. When in an aquarium setting, they must be fed good meaty fares like Mysis shrimp, frozen worms, and other similar treats.

Yes, their body can produce a mild toxin venom that will infect any cuts and bruises easily. As a result, great care must be used when handling a hardhead catfish due to its serrated fins, which can easily cause puncture wounds.

Yes, and hardhead catfish are often kept as pets too. This may partly be due to the fact that they are extremely easy to catch for even recreational anglers, being extremely aggressive hunters.

According to the local folklore of Alabama, the famous "Remove dead fish from roadway" signs around the first Dauphin Island Bridge were commissioned due to a dead hardhead catfish left on the road by a fisherman rupturing the tires of the Governor's vehicle. Now you know those serrations can pack a deep cut!

Can you eat hardhead catfish?

Yes, though hardhead catfish are considered too fishy to taste and of a slime-like texture to be good palatable fish. Despite the ease of catch for anglers, it is usually not targeted by them due to the risk associated with handling them. Due to these factors, hardhead catfish are not commonly seen on tables.

Why are catfish dangerous?

The serrations on the dorsal and pectoral fins on the hardhead catfish can cause a puncture wound, and the venomous toxin that they secret throughout their body can make any wound worse. As a result, recreational anglers should take great care when encountering this common yet poisonous fish.

You can even occupy yourself at home by drawing one on our free printable Hardhead catfish coloring pages.