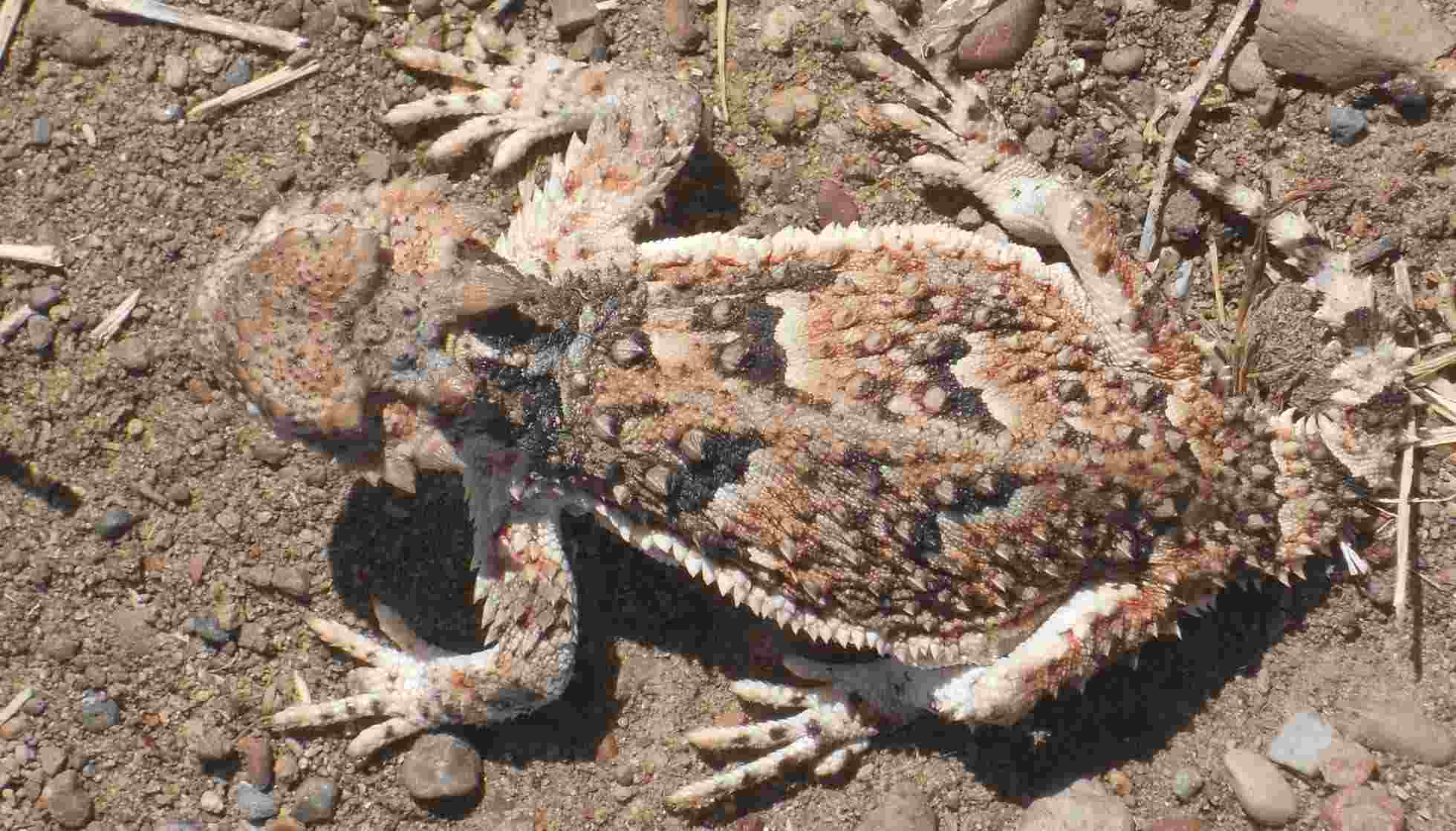 According to different sources, there may be anywhere between 22 to 89 total species of the horned toad. Of these, about 15 species exist in the North American continent, mainly in the Sonoran desert, and also in Mexico. Brown is one of the most common colors on the body of this reptile, helping it to blend in with the brown of the sand. Their behavior is described as sluggish and stationary. Different species of these reptiles favor different geographic habitats. The flat-tailed species of the horned lizard favors the fine sand of the desert, whereas short-horned lizards favor shortgrass prairies and fir forests. Regal-horned lizards are most common in rocky and arid regions of the Arizona hills and slopes. Horned lizards can exist from sea level to altitudes as high as 11,000 ft (3,353 m).

This toad's appearance is characterized by a thorny projection (or horns) from their head and parallel, fringe-like scales on their side, swollen tails, and anal scales on males. Regal-horned lizards almost exclusively eat harvester ants, but not dead ones. Horned lizards capture ants via their very sticky tongues, not their jaws since they have very short teeth. Although harvester ants are venomous, their venom seems to have little effect on the insides of a horned lizard. A whole swarm of ants, however, is a threat to a horned lizard and they retreat in the presence of one.  An adult horned lizard can be killed by a swarm of ants that attacks together.

The tough exterior of the bodies of the horned lizard proves to be a challenge for predatorial snakes. Also, horned lizards are sometimes indistinguishable from rocks, their camouflage being that excellent. The tough body may sometimes hinder mobility, however. A horned lizard may also pretend to be dead or present the thorny large part of its body to a predator like a snake. Another defense tactic is to run away, suddenly stop, and hiss at their predators, squirting blood out of their eyes and wagging their tails violently. Another great feature of their bodies is that it makes it easy for them to collect heat from the sun, especially in lower temperature habitats. The horned lizard is able to orient and move its body to obtain maximum sunlight. And for horned lizards that live in the arid desert, digging into the soil comes easy. The lizard makes use of the scales on its lower jaw to disturb and cut the soil or earth, and then vibrates its jaw and literally shakes its body into the ground, with almost no part left above the ground's surface.

Find out more about horned toads here, or learn about the water dragon and Komodo dragon here on Kidadl!

What type of animal are horned toads?

The horned toad is a lizard, which is why they are also known as horned lizards.

What class of animal does a horned toad belong to?

Horned toads belong to the reptile class of animals.

How many horned toads are there in the world?

The exact number of horned toads left in the world is unclear, but their population is declining, especially for Texas horned lizards (Phrynosoma cornutum) and short-horned lizards

Where does a horned toad live?

What is a horned toad's habitat?

Who do horned toads live with?

How long does a horned toad live?

Their tiny frame, spined, and camouflaged body makes this horned lizard (Phrynosoma) very cute. When young, they have very soft skin, which is also an endearing quality.

Horned lizards communicate with each other in a distinct manner, by moving their heads up and down, usually when looking to mate with someone.

How big are horned toads?

How fast can a horned toad run?

How much do horned toads weigh?

Males and females are both referred to as horned lizards.

What would you call a baby horned toad?

A baby horned toad does not have a specific name but is referred to as a young horned lizard.

Most horned lizards should not be kept as a pet because their numbers are rapidly declining. They do not survive well in captivity, and being adopted as pets is detrimental to their population, especially for the Texas horned lizard (Phrynosoma cornutum).

There are about 22 recognized species of horned toads known.

Short-horned lizards can fit in the palm of a child's hand, they are so small!

Horned toad care should include providing a sufficient natural habitat for them In fact, having a pet horned toad has been banned in the state of Oklahoma.

One of the most interesting horned toad facts is that they can wriggle sideways to conceal their bodies in the sand.

The desert horned toad is endemic to western parts of America.

Despite their name, Texas horned lizards are found in great numbers in western regions of Oklahoma.

The short-horned lizard does not lay eggs like other species, but live young are born from the parent's body.

Why do horned toads squirt blood from their eyes?

How do horned toads survive in the winter?

A horned lizard (Phrynosoma) survives the winter by hibernating underground. They go underground for the whole winter season, even laying eggs there. Their bodies cannot come back up easily if their orientation isn't suitable, meaning if they are belly up or upside down.

Here at Kidadl, we have carefully created lots of interesting family-friendly animal facts for everyone to discover! Learn more about some other reptiles including the sea dragon, or the bearded dragon.

You can even occupy yourself at home by drawing one on our horned toad coloring pages.