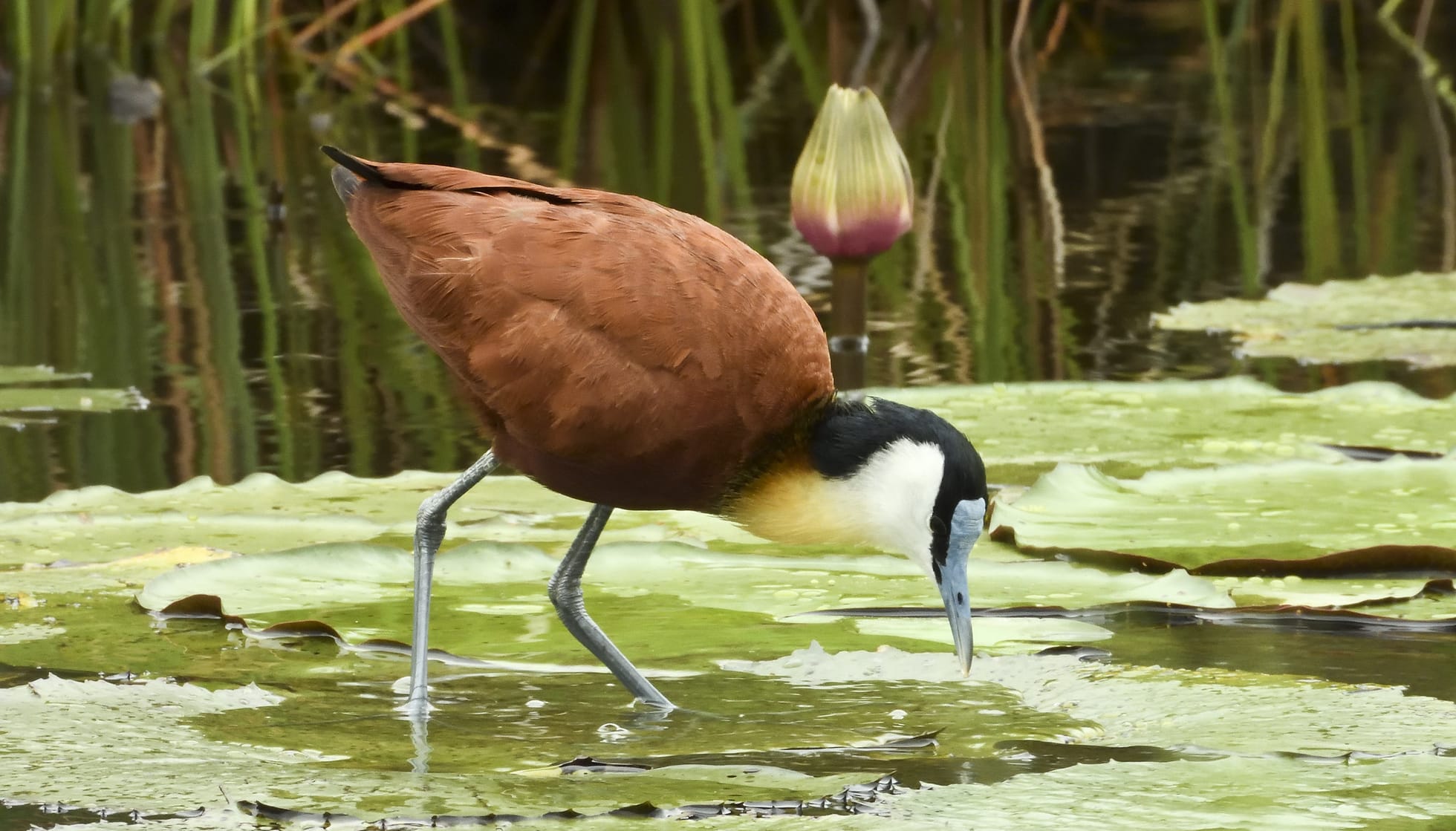 Jacanas, also known as 'lily trotter' and 'lotus bird' are aquatic animals belonging to the family Jacanidae. They can walk easily or balance on lily pads owing to their straight claws and hence the nickname. The eight species of the family Jacanidae include the Northern jacana (Jacana spinosa), the African jacana (Actophilornis africanus), the Australian lotus bird (Irediparra gallinacea), the Wattled jacana(Jacana jacana), and the pheasant tailed jacana (Hydrophasianus chirurgus). The jacana is mainly distributed in tropical and subtropical regions of Asia, Africa, Australia, Central, and South America. Their habitats mainly constitute inland lakes, ponds, marshes, and floating vegetation. They use their long legs and elongated toes to walk on floating vegetation in search of food, to defend territories, or go into hiding when confronted by predators. The jacana's most common threats include purple gallinule, snakes, turtles, and floodwater. They are also great swimmers and divers. According to the International Union for Conservation of Nature Red List, the jacana is declared as the species of Least Concern because of its stable population.

One unique characteristic of these birds is that they are polyandrous in nature which means the females mate with more than one male. This breeding system is not very common among birds. The females exhibit dominant traits over the males and guard their territories against rivals. Females are also more aggressive and larger in size than males. Male birds build the nest, look after the chicks and incubate the eggs. Read on to know more fascinating facts about this incredible bird. If you like this article, then check out golden pheasant and common buzzard facts too.

What type of animal is a jacana?

Jacana is a kind of aquatic bird belonging to the family Jacanidae.

What class of animal does a jacana belong to?

How many jacanas are there in the world?

The exact population of this species of bird is unknown but they have quite a stable population range and no widespread threats.

Where does a jacana live?

Different species of jacana are distributed in various parts of the world in the tropical and subtropical areas.  The African jacana (Actophilornis africanus) is mainly concentrated in sub-Saharan Africa,   Jacana spinosa are found in the range extending from Mexico to western Panama, Australian lotus birds are found in the eastern Australia coast and New Guinea. Pheasant-tailed jacanas are found in India, the Philippines and Indonesia.

What is a jacana's habitat?

The jacana is found mainly in water bodies containing floating vegetation like inland lakes, ponds, marshes, wet grassy areas, and farmlands. They depend on wetlands to survive. The floating aquatic plants have roots attached to the substrate or float on the water column. These birds build nests on these submerged plants. They are usually found from sea level to 8,000 ft.

Who do jacanas live with?

One female jacana breeds with multiple males. The dominant female defends territories of one to four males at the same time. They are usually found in pairs or in groups residing in their territories along with the chicks.

How long does a jacana live?

Not much is known about the lifespan of jacanas but they live approximately 6.5 years.

Jacanas have a unique way of breeding which is polyandrous in nature. Females are dominant over males and breed with more than one male. The breeding season falls somewhere around the rainy season. The female jacana usually initiates the process and grows larger with more prominent tail feathers. Once the breeding starts to take place, the male jacanas start building the nest on the water bodies. Their nests are made up of water lily leaves and other plant materials on top of the floating vegetation. Females usually lay at least about four eggs. It is then the responsibility of the male bird to incubate the eggs and look after the fledgling. After almost 22-28 days of incubation, chicks emerge from the eggs. The chicks have a camouflage design on their plumage.

According to the Internation Union for Conservation of Nature (IUCN), jacanas are declared as species of Least Concern because of their stable population and no widespread threats. However, destruction of their habitats and shortage of food supply is a primary concern.

Long toes and claws are a characteristic feature of these aquatic birds that helps them to fetch insects or worms from the water or lily pads. Their long toes can reach up to 4 in (10.2 cm) in some species. They also have long legs which help them to walk across the aquatic vegetation. Jacanas have black or reddish-brown color plumage. They have contrasting feather colors which are used to confuse the predator. The colors usually vary from one species to another. The northern jacana has greenish-yellow flight feathers, dark brown to black neck and head along with a yellow bill. The wattled jacana has a chestnut-colored back and wings while the rest of the body is black. The African jacanas have a chestnut-colored upper part with black wingtips.

The cuteness of a jacana bird usually stems from its appearance. They have distinct long toes and slender legs. Jacanas have a variety of colors on their wings and body which varies from species to species. For example, the Northern jacana has a dark brown body with a black head and yellow bill. Their feathers are yellowish-green in color. Young jacanas have brownish plumage along with white underparts. They are rather beautiful in terms of appearance.

Jacanas are known to be extremely vocal. They usually communicate during mating calls or to warn during the advancement of any preditor. The northern and pheasant-tailed jacanas sound like the mewing sound of a cat which transforms into a strident cry during a crisis. Male and female birds both communicate through the calls but the males have higher-pitched voices.

How big is a jacana?

How high can a jacana fly?

Not much is known about the height jacanas can attain while flying but they are weak fliers. They usually fly for a short distance.

How much does a jacana weigh?

Scientists do not have any specific names for the male and female species of this bird. They are usually referred to as male jacana and female jacana.

What would you call a baby jacana?

A baby jacana bird is usually referred to as a chick.

These birds are omnivores and use their bills to grab their food. They primarily feed on insects and other invertebrates. Their diet mainly consists of insects, snails, worms, seeds, and small fishes.

Both male and female partner up to protect their territory and are a bit aggressive in nature. If predators enter their boundaries, males from their nests call the female bird who might attack the predators with the help of their wings or bills. So, they only get aggressive when they sense danger from predators.

The key component of their habitat is water and they will not survive without it. So it is not recommended to keep the jacana in the confinement of a home.

Jacana baby birds can swim really well just like their parents. Jacanas are known to be great swimmers and divers. A jacana chick can stay underwater for long periods of time as they have special breathing holes on their bills. So, they are capable of diving down inside the water for safety with only their bills emerging outside. This 'snorkeling' behavior of the chicks has been noted in young wattled jacanas, pheasant-tailed jacanas, and northern jacanas.

The term jacana comes from the term jasaná, which is of an undetermined language from the Tupian languages.

What are jacanas also known as?

Jacana is also known as 'lotus bird' and 'lily trotter'. Their oversized feet help them to balance on lily pads and other floating vegetation, hence the name lily trotter. Owing to their long legs and toes they appear to be walking on water so they are also called the 'Jesus bird'.

Who protects a jacanas territory?

We observe a role reversal when it comes to the jacana birds as the females, who are more dominant than the males, defend their territories. The female is the protector of the territory and hence is double the size of the male. The males on the other hand build the nest and also look after the chicks. Each female defends the territories of more than one male. If a predator enters the boundary, the male seated on the nest calls the female who performs a territorial display by stretching their wings. If required, the female might attack the opponent with the help of their sharp spurs on the wings.

Here at Kidadl, we have carefully created lots of interesting family-friendly animal facts for everyone to discover! Learn more about some other birds including scarlet macaw, or pheasant.

You can even occupy yourself at home by drawing one on our Jacana coloring pages.