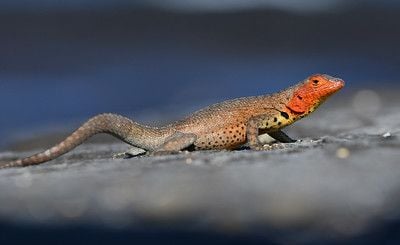 Lava Lizards, scientifically known as Microlophus albemarlensis, are found on the Galapagos Islands. They are cold-blooded omnivores found in large groups moving around in the sun on top of the black lava that covers most of the islands. This movement in the sun keeps them warm, and gives them their name: Lava Lizards.

Galapagos Lava Lizards are small reptiles of 6-12 in (15-30 cm) long with tapering tails, slim bodies, pointed heads, long toes, and scaly skin. Their physical appearance, including their markings and color, varies based on where they live. Lava Lizards are of seven distinctive subspecies, out of which six species are found among six different islands with just one species inhabiting one island alone. They are commonly sighted all year-round and are usually active during the day. When mature, males have an intense coloring of a yellow, brown, grey-black speckling throat and a short crest of spiny scales along the back, whereas females have red or orange cheeks. Lava Lizards are unafraid of humans, so if you are ever lucky enough to see one in real life, you might be able to get your very own photo of these amazing reptiles!

If you are excited to learn more fun and interesting facts about different species of animals, check out our guide to the desert tortoise and the Caiman lizard too.

They prey on spiders, beetles, ants, flies, and some plants like cacti What do they eat?

We're not sure how tall this animal is. If you know, please let us know at [email protected]

What type of animal is a Lava Lizard?

Lava Lizards are reptiles that look like miniature iguanas and are endemic to the Galapagos Islands. They are small reptiles between 6-12 in (15-30 cm) in length with long-pointed toes, fire-colored scales, and long tails. They feed both on insects and some plants.

What class of animal does a Lava Lizard belong to?

The Galapagos Lava Lizards belong to the Reptilia class and the Tropiduridae family, native to South America. Their scientific name is Microlophus albemarlensis. They are a species of reptiles that are scaly-skinned, four-limbed, egg-laying creatures.

How many Lava Lizards are there in the world?

The exact number is unknown, but they are the most widespread reptiles on the Galapagos Islands and can be found there in significant numbers. The Lava Lizards are categorized into seven distinct species that are most likely evolved from one genus, Microlophus. Out of the seven species, six species are distributed among six different islands, with just one species inhabiting one island alone.

Where does a Lava Lizard live?

Lava Lizards live throughout the Galapagos Archipelago along the Pacific coast of South America. One species of these lizards is found in all of the central and western islands and the other six species are found on the single islands they are named after. They are mainly inhabited in the lowlands, especially along the shoreline.

What is a Lava Lizard's habitat?

Lava Lizards are found mainly in the lowland dry zones of the Galapagos Islands. Here the soil is loose with lots of leaf litter and lava rocks. Lava Lizards use the soil to cover themselves with at night, and they also sunbathe and hide beneath the rocks. The habitat is also covered with plants like cacti and vine plants, which attract insects and provide food and shelter for the Lava Lizard.

Who do Lava Lizards live with?

Lava Lizards live with other animals including marine iguanas, the Galapagos penguin and tortoise, the Blue-Footed Booby, and the Magnificent Frigatebird. They live among predators including Galapagos hawks and snakes too. They sometimes also live among the tourists who visit the islands as they show little fear of humans and can be easily approached.

How long does a Lava Lizard live?

The Galapagos Lava Lizard typically lives up to 10 years. Camouflage and other interesting defense techniques like a dropping tail help these lizards protect themselves against predators.

Reproduction happens during warm months. Males are able to reproduce after three years of life, while females can reproduce after just nine months. Male Lava Lizards will engage in push-ups to attract females, and a female's cheek patches will turn red to signal to males that they are ready to mate. Male Lava Lizards mate with several females that pass through their territory. Females lay between three and six pea-sized eggs every month during the breeding season. The eggs are hatched within an incubation period of 12 months.

The Galapagos Lava Lizard conservation status is Least Concerned as they are not found on the IUCN Red List of endangered species database. They do not face any immediate threats, except the presence of introduced predators like rats, cats, and dogs.

The Lava Lizard, Galapagos' smallest reptile, is around 6-12 in (15-30 cm) long, with a pointed head and long tail. They have various designs and colors of scales based on the habitat where the species lives. For example, those who live on dark lava are usually darker than those living on light sandy land.

The male lizard is larger and heavier than the female. Males have a spotted black to ash gray large blotch throat with more patterns and a short crest of spiny scales that extends along the back to the forelimbs. In contrast, female Lava Lizards have a reddish-brown to red throat without markings and spiny scales.

Lava Lizards are not afraid of humans, and they've got intense coloring of yellow or orange scales, making them look very cute.

Lava Lizards do not communicate through any form of vocal communication. Still, they have some distinctive behavioral patterns including waving their tails, changing their colors, opening their jaws wide, rapid head bobbing, and push-up stances. The Lava Lizard's mood can be determined by a skin color change signaling fear or aggression. A male Galapagos Lava Lizard completes push-ups to defend their territories from intruders and to assert dominance. They will also stand high on all fours and change color if they are threatened or when the temperature changes. Females raise their tails and shake them from side to side to reject approaching males.

How big is a Lava Lizard?

Lava Lizards are tiny creatures usually between 6-12 in (15-30 cm) in length. The average  size differs for different species of Lava Lizards.

How fast can a Lava Lizard move?

The Galapagos Lava Lizard moves very quickly, but sometimes these little guys stand still and enjoy posing for a photograph.

How much does a Lava Lizard weigh?

The heaviest weight of Lava Lizard reptiles can be 550 lb (250 kg), but this depends on the size of each lizard.

What would you call a baby Lava Lizard?

The baby of a Lava Lizard is referred to as a hatchling.

Lava Lizards are omnivores; they feed on both plants and insects. Their diet is mainly dependent on their habitat and the climate. They eat moths, flies, beetles, ants, grasshoppers, and some plants like cacti.

Lava Lizards do push-ups to ward off competitors and intruders and make them appear bigger and stronger. If this does not work, they get into a physical fight involving tail slapping and biting.

Whilst Lava Lizards seem to be fearless and enjoy the attention of humans, they are endemic to the Galapagos Islands so you are unlikely to find one being kept as a pet.

Here are some interesting facts about Lava Lizards that will amaze you.

How do Lava Lizards adapt and survive?

Lava Lizards are a great example of animals adapting to harsh conditions. They have scaly skin that protects them against the sun and extreme heat. When temperatures are very high, they hide under rocks, leaf litter, or plants. They are also cold-blooded and therefore don't need a lot of food.

Lava lizards have two effective defense mechanisms to protect themselves against their predators. The most simple method used is camouflage. If they feel threatened, they will remain still and change their color to blend more effectively into their environment.

Another significant survival technique is their ability to drop their tail when a predator grabs hold of it. The dropped tail continues to move to distract the prey, allowing the lizard to flee. A new tail grows back to replace the old one. This defense mechanism allows them to live for up to 10 years.

Lava Lizards are found abundantly on the Galapagos Islands, islands formed from volcanic eruptions of basaltic lava, and so they get the name Lava Lizards. There are seven species of Lava Lizard of a single genus, Tropidurus, that are scattered among most of the Galapagos Archipelago. They are:

Here at Kidadl, we have carefully created lots of interesting family-friendly animal facts for everyone to discover! Learn more about some other reptiles including these sand lizard facts, or bog turtle facts.

You can even occupy yourself at home by drawing one on our Lava Lizard coloring pages.