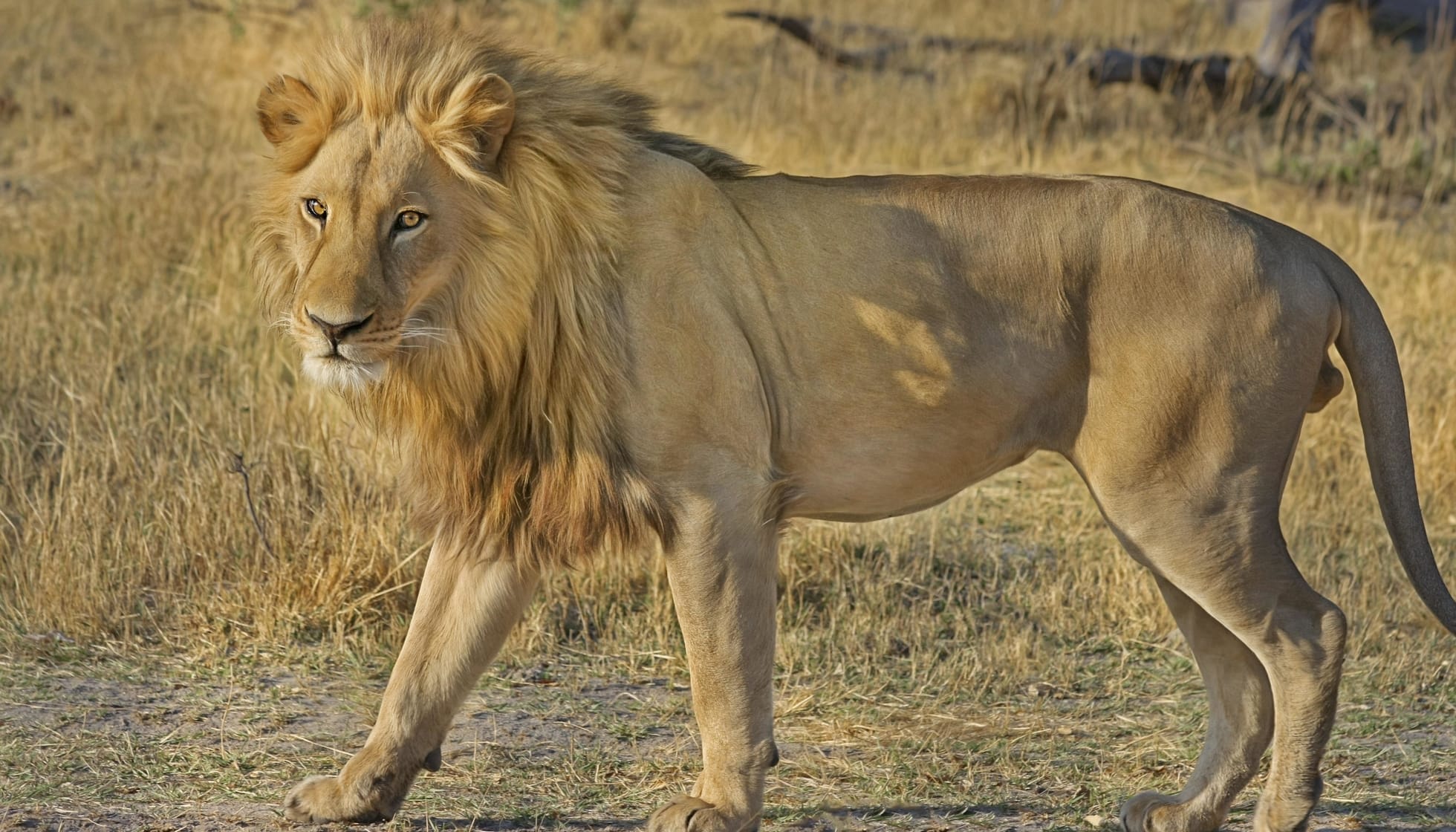 Lions (Panthera leo) are known as the king of the jungle. The lion is known as an apex or a keystone predator that lives in groups of around 15-20 members known as prides. Lions sometimes scavenge when the opportunity arises or can even hunt a human, but this behavior is not observed often. Lions are known as diurnal, but it adapts to be active at night and twilight. During the olden ages, lions were said to roam throughout Africa, Southeastern Europe, and Western and South Asia. However, now we find this majestic creature only in sub-Saharan Africa and some parts of India. The Panthera genus includes big cats likes tiger, jaguars, leopards, and lions. The two subspecies of the lion are African lions and Asiatic lions. The two subspecies split apart about 10,000 years ago. A group of female lions belonging to a common pride hunt together and prey on large animals that can cater to the food requirements of the pride.

What type of animal is a lion?

The lion is a type of big cat which is found in the African or Asiatic savanna and grasslands.  Everyone knows that lions are carnivorous animals and like to eat a huge quantity of meat. They are known to hibernate during the daytime and venture out for food at nighttime.

What class of animal does a lion belong to?

The lion belongs to the mammal class of animals. There are two known sub-species of lions known as African lions and Indian Lions. Most of the lion population is concentrated in Africa but a small population of wild lions can be found in the Gir Forest of India.

How many lions are there in the world?

Where does a lion live?

Lions live in a wide range of regions but prefer grassy plains, savannahs, scrub bordering rivers, and open woodlands with bushes. They are rarely found in dense rainforests or closed forests. These wild cats can be found at high elevations like Mount Elgon, which is 3600m above sea level and close to the snow line of Mount Kenya. They are more often spotted in the open savanna grassland with scattered acacia trees for shade. The Asiatic lion is found only in and around Gir National Park in Gujarat in western India. The habitat over there is a mixture of dry savannah forest with dry deciduous scrub forest. White lions have a rarity that has a genetic condition called leucism. White lions are spotted at the Kruger National Park and Timbavati Private Game Reserve in eastern South Africa. They are mostly held in captivity and bred in these camps in South Africa for use as trophies to be killed during canned hunts.

What is a lion's habitat?

Historically lion prides were found in much of Africa, parts of Europe, and Asia. Today, most lions live in the sub-Saharan region of Africa and only small population of the wild lions can be found in Gir Forest of India. Lions adapt well to very dry climates as they get most of their moisture from their food. A pride prefers open woodlands, scrubs, and long grasslands where there is a wide variety of prey to hunt. They are not found in the dense rainforests or too far into the desert. Many countries are now promoting new national parks to offer observing pride of lions within a safe habitat.

Who do lions live with?

Lions are social animals who live in small groups called prides. A pride can be made up of 5-12 related females and their cubs, along with 2-3 adult male lions. The male lions patrol a territory marked with trees and rocks with urine to ward off intruders.  The hunting in the wild is managed by the females together as the male lion is slower and easily spotted. Females together prey on wild animals and kill any prey even if it faster or bigger than them. Females also are responsible for taking care of the pride.

How long does a lion live?

The lion can live for 8-15 years in the wild. In captivity, lions can live up to the age of 25 years. Although, it depends on the type of lion habitat and if they are given proper care and nutrition.

Most lions reach their sexual maturity by 3-4 years. There is no specific mating season. The lionesses are polyestrous. A female lion may mate with more than one male during her heat cycle. The female gives birth to 1-4 cubs after an average gestation period of 110 days. The female will hunt alone during these times and closer to the den. Baby lions are born blind and are almost helpless at birth. They start walking around three weeks of age. The mother lion will join the pride only after the babies are six to eight weeks old. In a pride, lionesses often synchronize their reproductive cycle and indulge in communal rearing of the cubs. Weaning occurs at six or seven months.

The conservation status of the lion is vulnerable. The encroachment of their natural habitat for agriculture and cities is the most critical threat for these animals. The hunting of lions as a game was also a major reason for the decline in its population. In order to promote their conservation, hunting lions has been banned in Asia and Africa. Moreover, dedicated national parks are being created to offer the prides a safe habitat.

Lions are famous for their courage and strength. The lion is portrayed as a symbol of strength in many places, be it in flags, emblems, or as an identification marker. They have the most powerful body in the cat family second only to the tiger. Their roar can be heard from five miles. Adult lions have yellow gold coats. Male lions are known for their mane, and the fringe of long hair that encircles their heads. The lion has a strong body with a round head. They have a coat colored from light buff, silver-grey yellowish red, and dark brown.

Lions are ferocious-looking animals. We always associate them with strength and fear, but when observed in their natural habitat they can look cute and lazy. Especially little cubs and male lions with their manes. They do look majestic and regal as they are at the top of the food chain in the jungle.

Lions communicate in a lot of different ways. They make sounds like moans, grunts, roars, hums, purrs, snarls, woofs, and poofs. They are big non-verbal communicators, too. Male and female lions are known to purr, lick and gnaw at each other.

How big is a lion?

Lions are big cats.  They are probably the biggest of the Panthera or the big cat species like tigers, lions, jaguars, and leopards. With a length of 4.5-8.2 ft, a lion is a big animal.

How fast can a lion run?

The lion can run at a speed of 50 mph in short bursts. Females may not run till they are very close to their prey.

How much does a lion weigh?

What would you call a baby lion?

Baby lions are called cubs. Every lion cub would spend some days with the mother as they don’t do well on their own and need their mothers’ assistance.

Lions are known as keystone predators, which means they have a huge impact on their environmental surroundings due to their wide prey spectrum. They prey on mammals, mostly ungulates like plains zebra, blue wildebeest, gemsbok, African buffalo, and giraffe. They prefer to hunt a species that weigh between 418-1200 lb. In India, they prey on sambar deer, chital and domestic cattle. A lion is capable of bringing down a wild beast or a zebra. Normally they hunt in their groups which are known as prides. A pride consists of usually 15-20 lions with 3 males, 12 related females, and the young lions.

They are dangerous if we ruffle them the wrong way. Lions are not known to hunt or attack a human until provoked or in dire circumstances.

Instead of keeping them as pets or in captivity, efforts are being made to restore their natural habitats, we have already seen a steady fall in their numbers. They have survived in captivity, but it wouldn't be a good idea to keep them as a pet.

Lions are known to jump or leap as far as 10 m.

When a lion walks, its heels don't touch the ground, which makes it seem like they are tip-toeing.

The lion roar can be heard almost 5 miles away.

Lion diet comprises of 11-15 lb meat every day. But if they eat a large prey like a wildebeest, they can go without eating for five days.

Adult lions are known to sleep for 20 hours a day, especially if they have had a heavy meal. They can sleep with one eye open.

The mane around the male lions’ face is the only thing that differentiates them from female lions. The mane could be blonde, red, brown, or black in color and can cover its head, neck, and chest.

When you compare a tiger vs lion in terms of strength, the tiger emerges as the stronger of the two. On comparing the two beasts based on their skulls, the lion skull is generally flatter and the face is upturned while the tiger skull has more of a rounded look.

Although a mountain lion also belongs to the same species as an African lion, in terms of strength, the African lion wins easily over its distant cousin.

What does a lion symbolize?

The lion is known as the king of the jungle. This species is known for their courage, power, and strength. They are huge beasts who have been used as symbols of courage and power for centuries now. This is the reason that most people love to get an artefact of a lion head.

Can a lion have blue eyes?

Lion cubs are born with blue eyes. However, this is temporary, and gradually the color will change to brown or amber as they become two to three months old.

Here at Kidadl, we have carefully created lots of interesting family-friendly animal facts for everyone to discover! Learn more about some other mammals including leopard cat, or Malayan tiger.

You can even occupy yourself at home by drawing one on our realistic lion coloring pages.