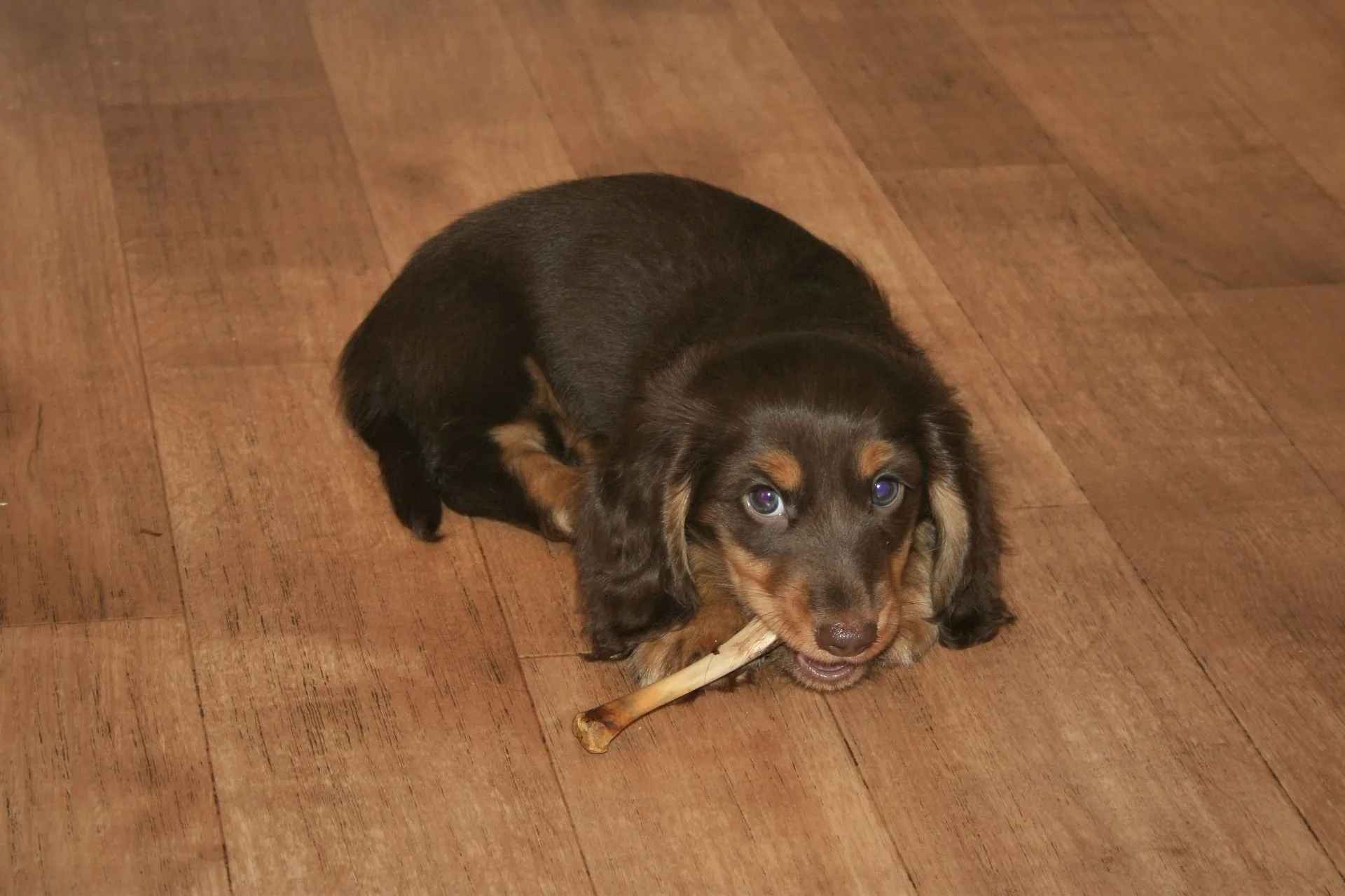 Long-haired dachshunds come in two sizes – a standard-sized and a miniature version. These small dogs have big personalities with a strong prey drive. Long-haired dachshunds are playful, loyal, protective, and love chasing anything that moves. Longhaired dogs have moderately high grooming needs. They also shed a fair amount of hair. A dachshund's firm, patient, non-aggressive, consistent, temperament makes it a good family dog. There is Dachshund Club in many countries.

Also, check out fact files on dachshunds and Old English sheepdogs from Kidadl.

All Places, And Globally

What type of animal is a long-haired dachshund?

Dachshunds are a hound group of dogs first bred by hunters in Germany. They are scent hounds bred by mixing various tall hunting dogs with smaller dog genes. The genes of the lineage of dachshunds may contain genes of various dogs like bloodhounds, terriers, Schweisshund, pinschers, and the German Bibarhund. Dwarf alterations of the dogs were bred to the desired size and the small legs were achieved for these hunting dogs.

Dachshunds come in two size variants, standard dachshunds and miniature dachshunds. These little dogs have various coat colorings but distinctive dachshund's physical traits. Longhaired dachshunds come in solid or bicolor combinations. Their coat may be light and dark shades of tan, red, or black. The long hair that makes them look prettier is obvious on their ears, chest, and tail. And some Mini Longhaired Doxies have blue or brown eyes.

What class of animal does a long-haired dachshund belong to?

How many long-haired dachshunds are there in the world?

Where does a long-haired dachshund live?

What is a long-haired dachshund habitat?

The popularity level of dachshunds is huge globally. The demand for miniature dachshunds has also increased over the years for their cuteness, compact size, long lifespan, friendly behavior. With this breed, you can keep your dog happy with 15 minutes of walk every day and some playtime activities. They are also small eaters with fewer food requirements and are considered low-maintenance dogs. These dogs tend to become overweight and need controlled food. Given a chance, a dachshund will always be willing to eat!

Who does a long-haired dachshund live with?

In the olden days, dachshunds lived mostly with badger hunters. Sometimes, they hunted in packs. Now, they are extremely popular house pets and live inside homes with their owners. Dachshunds don’t require too much exercise, making them apartment-friendly dogs. They adjust well in homes with or without lawns. Dachshunds have non-aggressive behavior, a spunky personality, and are loyal to their owners. Long-haired dachshunds love to snuggle just like the smooth-haired ones. All dachshund breeds are cute and cuddly including the rough-coated, wire-haired dachshunds.

They adore their human family and have pleasing personalities. If standard or miniature long-haired dachshunds are not properly trained, they may develop behavioral issues. Some common behavioral problems are excessive barking, aggression, and destructive behavior.

How long does a long-haired dachshund live?

The standard-sized dachshund breeds live for 12-14 years. Miniature dachshunds generally live longer. They may live up to 18 years of age depending on the breed, health conditions, etc. These little dogs live longer than other hound dog breeds.

The conservation status of long-haired dachshunds is of Least Concern. The appearance of the three varieties of dachshund breeds is similar. Their coats are different. The smooth hair variety has a short and shiny coat. The wire-haired dogs have a coarse upper coat, long beard, and thicker eyebrows. The long-haired dachshunds have a slightly wavy upper coat with silky, long hair. The standard-sized dogs with three coat lengths have similar traits and temperaments.

Out of the dachshund breeds, the long-haired dachshunds are considered the most beautiful. These luxurious furs come with a big personality and gentle nature. No matter how pretty and cute they look, there's always a hunting dog's personality hidden inside every dachshund. The appearance of all dachshunds is like a sausage! Their body is longer than their height and their legs are short. These hunting dogs are short as it gave them the advantage to enter burrows and flush out games for their hunter owners in Germany.

Long-haired dachshunds are extremely cute and cuddly pets. The miniature dachshund’s cuteness quotient is more than the standard size.

Standard as well miniature long-haired dachshunds are vocal breeds. These small-sized dogs have a loud bark. If left alone for a long time, these dogs with stubborn personalities may bark continuously.

Cuddles, snuggles, tummy rubs, tickling the ears, are signs of love for these sweet-natured pooches. They love being fussed over thanks to their attention-seeking traits!

How big is a long-haired dachshund?

Compared to a Great Dane which is about 30 in tall, a standard dachshund is more than three times smaller. They are usually just 9 in (22.8 cm) tall.

How fast can a long-haired dachshund run?

With their short legs, standard long-haired dachshunds can run up to 20 mph (32.1 kg). Miniature dachshunds have a similar running speed.

How much does a long-haired dachshund weigh?

A standard long-haired dachshund can weigh from 16-32 lb (7.2-14.5 kg). A miniature dachshund’s ideal weight is 11 lb (5 kg) or less, according to the American Kennel Club (AKC) standards that are also accepted by the Dachshund Club of America.

What would you call a baby long-haired dachshund?

A baby, a long-haired dachshund is called a puppy.

The small dachshund breed is a dog with a big appetite. They have a tendency to overeat and gain unhealthy weight, which may lead to health problems. Their diet should include enough nutrients and calories. A miniature dachshund should be fed one cup of food in a day. Kibbles, processed wet food, chicken, beef, fish, lamb are good for doxies.

Dachshunds are not excessive droolers but may drool a bit.

Doxies are excellent family dogs. They are intelligent, independent thinkers, and have all the traits of a hound breed. These dogs are also good with children. Their pleasing personality makes the standard and the miniature varieties one of the most loved dogs in the world. According to the American Kennel Club, dachshunds are among the top fifteen popular dog breeds.

A long-haired dachshund puppy of a standard and a miniature breed may cost between $300-2000. The cost depends greatly on the coat color and size.  These small dos are recognized by the American Kennel Club in the hound group. Like most hounds, they are attached to their owners and aloof from strangers. Although dachshunds were originally bred to be hunting dogs, these versatile little dogs make excellent family dogs and show dogs. Like other hound breeds, these dogs of German origin do not require lots of exercise. Some good exercises can be a 15-20 minutes walk twice a day and some playtime which will result in their good health. The dachshund’s ability to adapt and adjust to apartment living has gained this breed extreme popularity. Long-haired dachshunds are said to be calmer than the smooth or wire-haired breed.

The dachshund breed came to the United States in 1885. This dog breed received recognition from the American Kennel Club in the same year.

Climbing stairs is bad for dachshunds as it puts stress on the back and spine of the breed.

In 1972, ‘Waldie’ the Olympics Game mascot was a dachshund.

Along with lesser living space requirements, long-haired standard and miniature dachshunds also have lower grooming needs compared to many other longhaired dog breeds. Long-haired and wire-haired dachshunds require some grooming but their shedding tendencies are low. For first-time dachshund owners, some dachshund grooming and care articles would be helpful.

Dachshunds have hound and spaniel genes and were bred as hunting dogs. Though their daily exercise requirements are not too much, they love to spend some activity-oriented time with their family members. Becoming overweight is not a problem for a smooth-haired or a long-haired dachshund. They need a controlled diet as they cannot resist food.

Along with the traits of cleverness, and a smart personality, dachshunds have a streak of stubbornness. The dog's doggedness can make training a long-haired standard or miniature dachshund puppy difficult. Potty training is a major issue some owners face with their dachshund puppy.

Here at Kidadl, we have carefully created lots of interesting family-friendly animal facts for everyone to discover! Learn more about some other mammals from our Japanese macaque facts and snowshoe hare facts pages.

You can even occupy yourself at home by coloring in one of our free printable Dachshund puppy coloring pages.