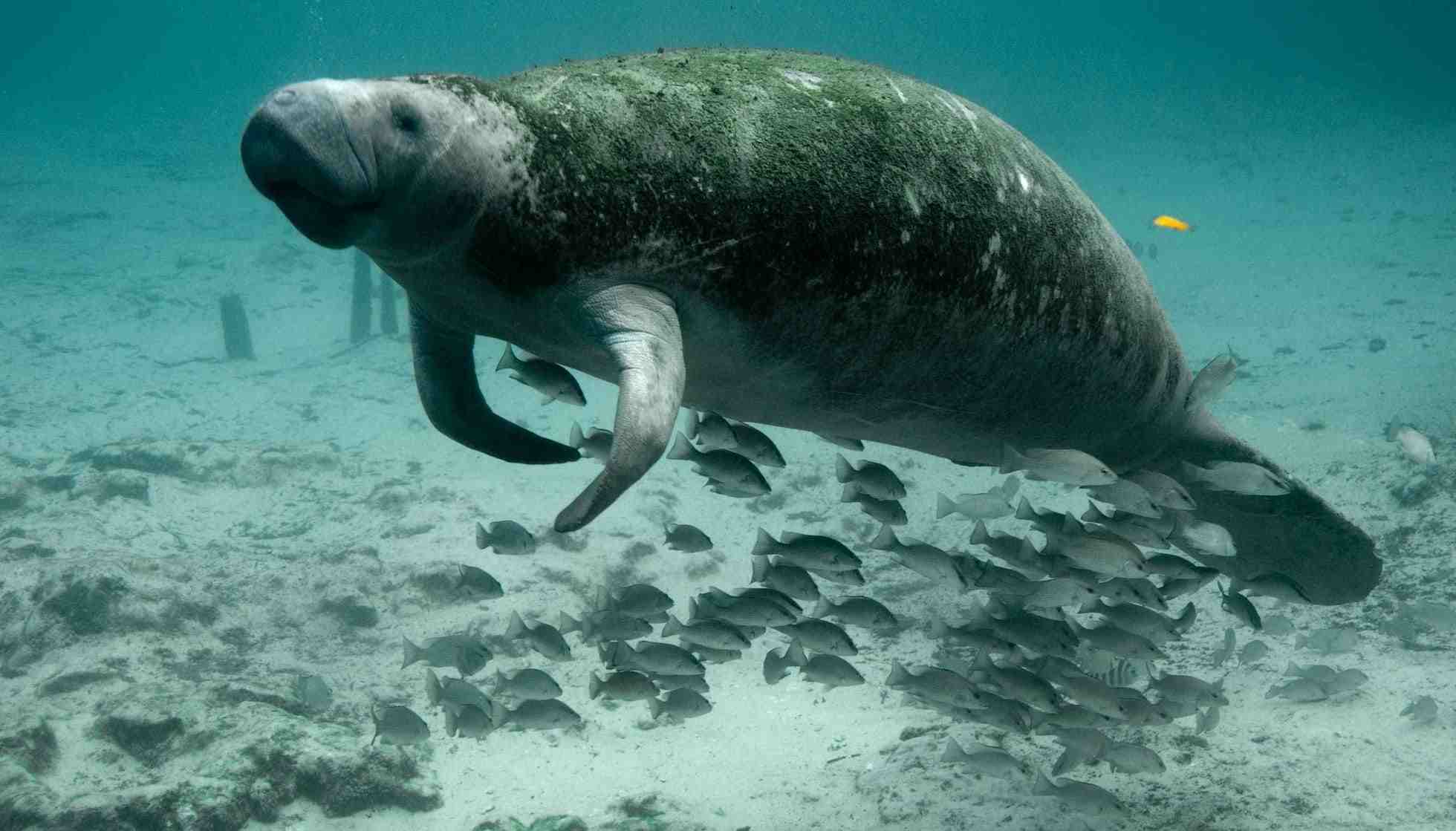 Manatees are large aquatic mammals found in the shallow marshy coastlines and rivers of the Caribbean Sea, Gulf of Mexico, Amazon basin, and West Africa. These four regions have their own species of the sirenia called the West Indian manatee, Amazonian manatee, and West African manatee. The manatee is a large animal that can grow to a size of 108-120 in (9- 10 ft). The fourth living species of the sirenia is the Eastern Hemisphere dugong. They may be called sea cows, but they are known to be evolved from four-legged land mammals known as Proboscidea (elephant) and Hyracoidea (hyraxes). The manatee is distinguished by their large flexible, prehensile upper lip, which is used to gather food and eat and also for other social interaction and communication. Their snouts are smaller than other sirenias and dugongs. They have widely spaced eyes that close in a circular manner.

Adult manatees have no incisors or canine teeth, just a set of cheek teeth that are not clearly defined. The tail is paddle-shaped and is the clearest visible difference between a manatee and a dugong. The female manatee has two teats, each under one flipper. Like the horse, it has a simple stomach with a large cecum. The gentle beasts are often hit by motorboats in crowded water due to their curious nature.

After reading these Florida manatee facts,  do check out our other articles on West Indian manatee facts and dugong facts.

What type of animal is a manatee?

What class of animal does a manatee belong to?

Manatees belong to the amphibian mammal class of animals. They are large creatures who have evolved from elephants. These wild animals are solitary creatures that are found slowly moving along the coasts. There are three species of manatee known as Amazonian manatee, West Indian manatee, and African manatee.

How many manatees are there in the world?

There could be around 5,733 manatees in the Florida region. The accurate numbers for all the species is difficult to come by as the counts carried out so far have come up with variable numbers. With the loss of habitat and crowding near the coastline, the manatee population is declining gravely. Efforts are being carried out to improve their habitat.

Where does a manatee live?

Manatees are found in the ocean, river, or seas around the four regions of West Africa, the Caribbean, the Gulf of Mexico, and the Amazonian river. The West Indian manatee or the American manatee is found along the east coast of the United States. They are found in the region of Cape Cod, Massachusetts, or New York. During the months of November and March, they are found in the Crystal River National Wildlife Refuge and the rivers of Citrus County Florida. During the winter months, they travel down south to warmer water.

Amazonian manatees are found in the Amazon River and its tributaries. These manatees are found only in the freshwater of the Amazon rivers. The West African manatee can be found along the west coast of the African continent. They are found in the Senegal River and Cuanza River. They are also found inland at Koulakori, Mali, on the Niger River. This is located 2000 km inland. Manatees are often found along the coastlines of this region.

What is a manatee's habitat?

Manatees live in the coastal region, marshy lands, freshwater rivers and tributaries, and estuaries, saltwater bays, canals, and canals where seagrass beds and freshwater vegetation flourish. Manatees are known as migratory species. During the winter months, they travel towards warmer waters.

Who do manatees live with?

How long does a manatee live?

Manatees can live for 50 to 70 years. In the wild, they may have a shorter life due to habitat loss, or other factors such as human intervention. In captivity, they may live longer.

Manatees mate every two to five years. They form a mating herd during the breeding season. The mating process will have 12 or more male manatees that will follow a single female manatee. They are known to mate during the spring and summer months. Manatees have a gestation period of 12 months. After which, they give birth to one or twin babies, although twin manatees are rare. They give birth after two years, and only after the previous baby is completely independent. The mother nurses the baby for this period. The babies are known to interact with their mothers vocally.

The conservation status for a manatee is Endangered. The loss of habitat and being a bycatch has been the major reason for the declining population of these Endangered species. They are found so close to the coastline and where pollution is very high, this has also caused the loss of this creature.

Manatees are known as sea cows with gray-colored skin and are known to graze on vegetation in shallow waters. They do not have any predators as such, except humans who have encroached on their habitat. They are known as one of the largest amphibians in the world. They grow to be 96-120 in (8-10 ft).

They certainly are cute, quiet creatures that are found swimming slowly around the coastline. They have a long upper lip which is used not only to find food but also for other reasons.

Manatees do not have loud voices. Most communication happens between mother and baby manatees. While interacting in a herd, some vocalization is heard.

How big is a manatee?

Manatees are one of the largest amphibian mammals found in the oceans and seas of the world. The adult manatee has a length of up to 156 in (13 ft) and weighs almost 1100 lb (498 kh). They are as big as other sirenians like the dugong.

How fast can a manatee move?

How much does a manatee weigh?

The Manatee weighs close to 800- 1212 lb (362-549 kg). They are large animals who are found near the coastlines. They are known for their size and gait as gentle giants.

What would you call a baby manatee?

The baby manatee is called a calf.

The manatee diet comprises freshwater herbs like pickerelweed, floating hyacinth, water lettuce, alligator weed, hydrilla, musk grass, water celery, mangrove leaves, and saltwater plants like shoal grass, seagrasses, turtle grass, manatee grass, sea clover, widgeon grass and marine algae. The manatee uses their divided upper lip to eat 10-15% of their body weight, which is about 110 lb (49 kg) per day. These cow like sea animals are known to graze for seven hours a day. They use their hindgut fermentation to process the high level of cellulose in their plant-based diet. They use their flippers to scoop vegetation.

These slow moving animals are not at all dangerous or aggressive. They are gentle giants who are found ruminating near the marshy land around the coastline of the ocean, sea, and rivers.

They would make an excellent pet. They do well in the captivity of the zoos and aqua parks. Provided we give them the required habitat, which is important for their survival.

They are closely related to elephants; however, they are known as sea cows. Manatees eat 10-15% of their body weight every day which is close to 110 lb (48 kg), and they take seven hours to eat.

The Florida manatee nurses the baby manatee for two years. Since manatees do not have gills, they sleep upside down very close to the surface so that they are able to breathe.

Baby manatees, or a manatee calf, is able to swim soon after being are born. The manatee calf can swim up to the surface on their own. Manatees have different organisms growing on their backs, like algae.

West Indian manatees are often hit by large ships, or they collide with the propeller of the ship.

The red tides are algae bloom made of large quantities of protozoans, unicellular algae, and other aquatic microorganisms that are brought to the surface. These red tides are toxic for manatees.

There are three species of manatee known as Amazonian manatee, West Indian manatee, and African manatee.

The water temperature shouldn’t get too cold, or else the manatee's body will shut down and they will eventually die. These creatures prefer warm and hot waters as this is what they are most adapted to.

The cute manatee face will remind you of a cow, this is a reason that even a huge manatee looks like a cow.

Sharks can eat manatees, but don't eat them often. Sharks do not hunt for large bony animals like manatees. In fact, sharks may not even swim so close to the manatee habitat.

Why are manatees so fat?

They aren't fat, they have a large stomach and intestine. They also have a low metabolic rate.

How to draw a manatee

You can check many videos online for clear instructions on drawing a manatee. You can draw a small circle and then a large oval attached to it. From here, you can draw the elongated face and flippers on the other side of the oval. Fine-tune the facial features and draw the front flippers. Here you have it, the manatee.

Here at Kidadl, we have carefully created lots of interesting family-friendly animal facts for everyone to discover! Learn more about some other mammals including European otter, or harp seal.

You can even occupy yourself at home by drawing one of our baby manatee coloring pages.