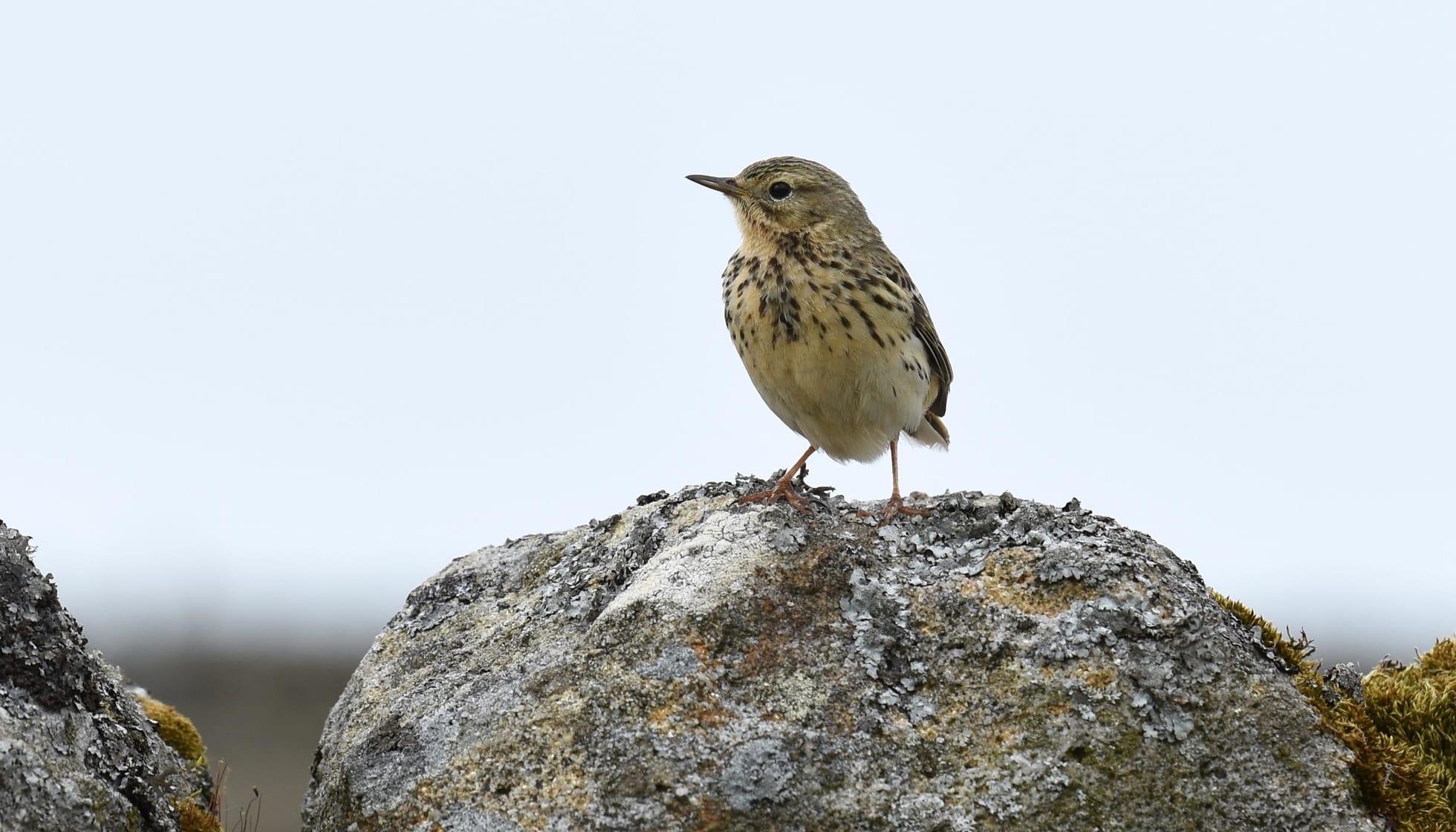 The meadow pipit (Anthus pratensis, which is the scientific name of this bird) belongs to the Motacillidae family. Meadow pipit range includes Palearctic including southeastern parts of Greenland, Iceland. They are also found in the parts of the Ural mountains in Russia, France, Romania. Some population has also been spotted in the Caucasus Mountains. Wintering happens in southern Europe, southwestern parts of Asia, North Africa. The habitats or nesting site of these birds consists of moorland, rough grasslands, and heathlands. These birds move to lowland regions from upland areas in autumn. The mating or breeding season of these birds begins in April to August in the western part of Europe. The nest is known to be made in the grounds and hidden well with or under vegetation. These pipits are known to not have bright-colored plumage and thus, tend to have brownish, buffy-colored plumage with dark or prominent streaking on the body and feathers and outer tail pair. The streaking in the young ones and adults differ but males and females look similar. The streaking can be seen all over the body, including flight feathers and excluding underparts like the belly. The bill of these pipits is thin and pointed and dark brown colored. The tail is also of the same color as the bill. The diet of this species consists of insects, flies, and seeds. The conservation status of this species is categorized under the status Near Threatened as they are rare and habitat loss is considered as one of the reasons. Not much information is available regarding the conservation measures for this species. It is quite interesting to learn about this species, meadow pipit (Anthus pratensis) and if you are interested, read about some other bird species like the hummingbird and the blue jay too.

What type of animal is a meadow pipit?

Meadow pipit (Anthus Pratensis, the scientific name of this species) is a bird.

What class of animal does a meadow pipit belong to?

Meadow pipit belongs to the class of Aves of birds.

How many meadow pipits are there in the world?

It has been estimated that there are around 12 million pairs of these meadow pipits.

Where does a meadow pipit live?

It has been recorded that the meadow pipit bird breeds mostly in the Palearctic including southeastern parts of Greenland, Iceland. They are also found in the parts of the Ural mountains in Russia, France, Romania. Some population has also been spotted in the Caucasus Mountains. Wintering happens in southern Europe, southwestern parts of Asia, North Africa. It is known to live in western Europe all year.

What is a meadow pipit's habitat?

The nesting site or habitats of these birds include moorlands, rough grasslands, and heathlands. As the birds move in the non-breeding season, they inhabit lowland regions by traveling from upland areas or the upland region in autumn, and winter. It can also be found in saltmarshes and farmlands.

Who do meadow pipits live with?

These birds sometimes gather in small flocks during the passage.

How long does a meadow pipit live?

The meadow pipit is known to live for three years or more.

The mating or breeding season of this bird takes place from April to August in western and central Europe and later than this time at higher elevations. This bird is also known to perform display flight and this display flight is known to be a part of the courtship ritual. The nest of this bird is made in the ground, open areas, heaths, or in coastal marshes, which is concealed or hidden in the vegetation. It is made with grass and lined with finer grass and hair. Around three to five eggs are laid and incubation of these meadow pipit eggs is done for about 13 days. Females are known to incubate the eggs, but the males can help occasionally. These eggs hatch after around 11-15 days and the fledging takes place around 10-14 days after the hatching happens. It has been recorded that around two broods are raised every year.  The nest of this species is known to be parasitized by the common cuckoo.

This bird is placed under the Near Threatened category of conservation status.

The upper parts of the meadow pipit are known to be brown or olive-brown in color and have broad stripes or streaks which are brownish-black colored on the head, scapular, back, and mantle. The upper wing is known to be darker along with paler or lighter edges on the flight feathers. The upper wings coverts tend to have whitish and pale olive-brown colored edges which tend to form two wing bars. The tail of the meadow pipit is dark brown in color and is whitish colored on the most outer tail pair. The underparts of this species are lighter or whitish or have a yellowish buff. Parts like the side of the throat, flanks, and breasts are prominently streaked or striped with dark color. The underwings are known to be buffy white. The crown of this bird species is known to resemble the upper parts. The coverts of the ears are known to be yellowish-brown in color. This bird species also have a narrow malar stripe which is blackish. The bill of this bird is known to be thin and is dark brown with a lighter base. The eyes are known to be surrounded by a pale or light eye-ring and the eyes are brownish-black in color. This bird tends to have long hind claws and the legs and feet are yellowish-brown in color. Mmales and females of this species look similar and juveniles or young ones tend to have buff-brown colored underparts and weak stripes or streaks. There can sometimes be a pink tinge on the belly and chest. There is no particular breeding and winter plumage.

These birds are considered cute because of their small size.

Just like other species of birds, these birds also produce sounds and calls of various types to communicate with each other.

How big is a meadow pipit?

The length of this bird ranges from 5.7-5.9 in (14.5-15 cm). They are smaller than a fox sparrow and similar or sometimes slightly larger than an American pipit, a member of the same family as meadow pipit.

How fast can a meadow pipit fly?

The exact speed of this meadow pipit is unknown, but their flight is known to be undulating.

How much does a meadow pipit weigh?

There are no specific names for the males and females of the meadow pipit.

What would you call a baby meadow pipit?

There is no particular name for a meadow pipit baby, but it is generally referred to as a chick or young one.

The food or diet of this bird generally consists of invertebrates like flies, insects like grasshoppers, stoneflies, dragonflies, spiders, beetles, and moths. They are also known to eat seeds in winter and autumn. The meadow pipit is known to be terrestrial and tends to forage for food in short vegetation. It preys while walking and running free on the grounds and is occasionally found on a tree.

These birds are not poisonous.

Not much is known about these birds as a pet. However, it is believed that they might not make great pets as they are wild, free, and migratory birds. These birds move to western Europe for the breeding season.

This species is known to be formally described by Carl Linneaus, a Swedish Naturalist in 1758 in the tenth edition of System Naturae.

These birds are referred to as titlarks sometimes.

Sometimes, they are known to have a pink tinge on the chest and belly.

This species is monotypic, that is, there are no subspecies of this bird recognized.

It has been observed that they gather or form small groups or flocks during the non-breeding season.

The flight of these birds is known to be undulating. They form small groups or flocks during the passage.

Changes in the practices of farming are one of the major concerns for the declining population of this species. The decline in rough grazing areas leads to lesser habitats for the meadow pipit to eat and live in and it is believed that there are currently no known measures of conservation for this species.

It is difficult to distinguish between different or various types of pipits but there are certain factors that can help to do so. Like a tree pipit, another member of the family is known to have a slightly harsher call than that of a meadow pipit and the descending flight song of the former is quite distinctive which sounds like 'see-ya see-ya'. The rock pipit, a member of the same family is considered quite similar to the meadow pipit but has a fuller and more rounded voice in the song or call and the water pipit is also known to have a similar song or sound like the rock pipit but their song is slightly melodious.

It is quite difficult to differentiate between various types of pipits based on their appearance but the distinction can be done by the sound, call, and song.

Here at Kidadl, we have carefully created lots of interesting family-friendly animal facts for everyone to discover! For more relatable content, check out these Savannah sparrow facts and bee-eater facts pages.

You can even occupy yourself at home by coloring in one of our Meadow Pipit coloring pages.