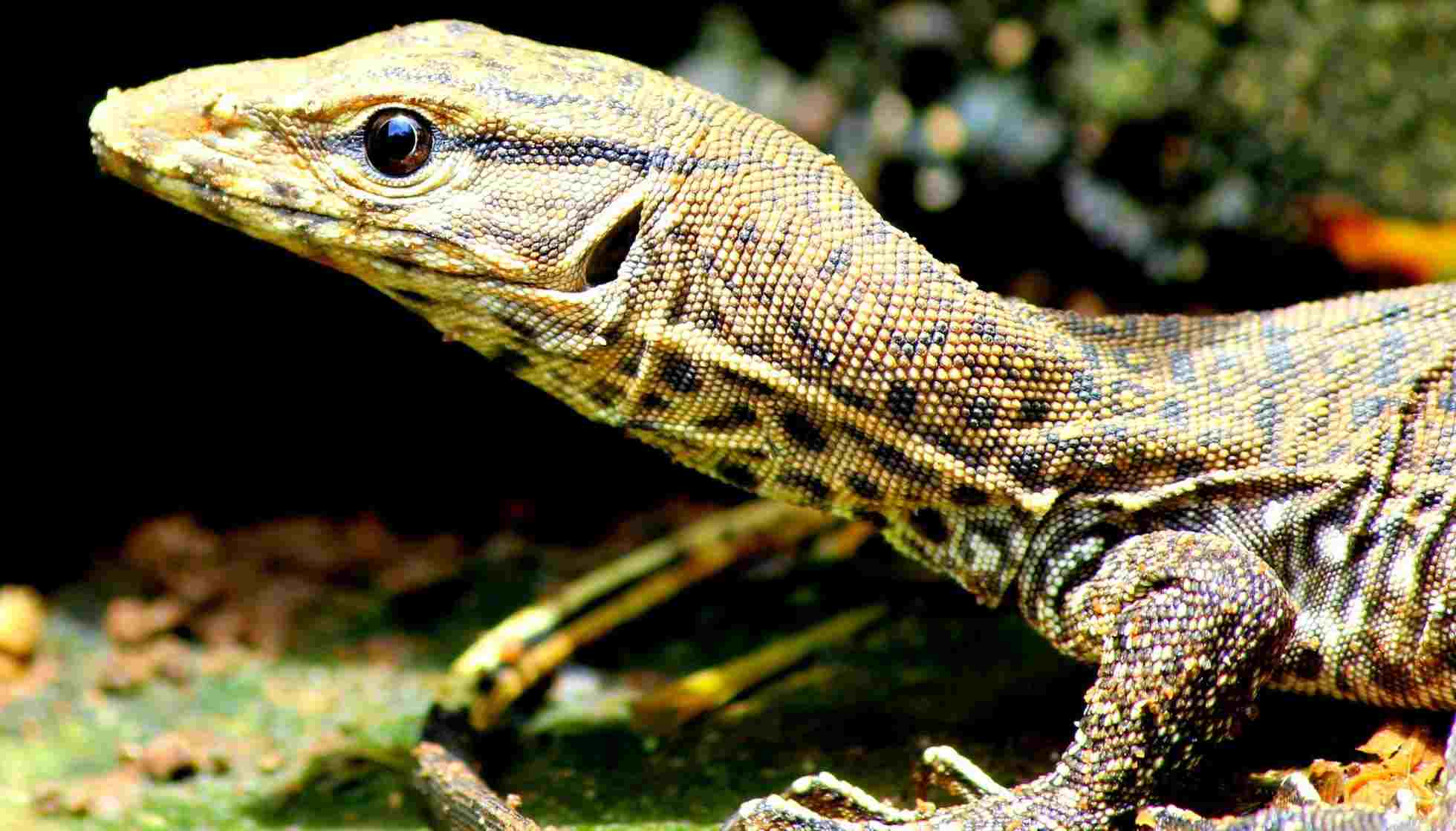 Irrespective of age everyone is well accustomed to common house lizards. Who knew that just another species of lizards from the family of Varanus can be so much more interesting and full of fun facts! Here are some monitor lizard facts for kids and everyone else to enjoy. The family Varanidae is believed to be originated 65 million years ago. Belonging to the family Varanidae, monitor lizards are large lizards. There are several species of this reptile, among which the Komodo Dragon is the largest lizard that can be found on the planet. The large-bodied, long-necked, and strong-tailed reptiles are an interesting species indeed. The animals prey on a vast array of insects and other animals. However, among all their other prey, deer make up for quite a large amount of their diet.

Similar to other reptiles, they also lay eggs. The average litter size of a monitor lizard is 10. However, it changes depending on the species. For instance, Komodo dragons can lay 20 eggs at a time. Some other monitor species can even lay 30 eggs at one go. They can mostly be found in parts of Asia and Africa, however, they can also be found in parts of America, where they are considered invasive species.

For similar content, check out the cottonmouth snake and the water dragon.

What type of animal is a Monitor Lizard?

The monitor lizard is a type of reptile and belongs to the Varanus genus.

What class of animal does a Monitor Lizard belong to?

Monitor lizards belong to the reptile class of animals.

How many Monitor Lizards are there in the world?

Where does a Monitor Lizard live?

The species is a vastly found one. Monitor lizards are eurytopic. They can adapt to a range of different habitats. Monitor lizards can be found in Africa, China, the Indian subcontinent, Thailand, Indonesia, Malaysia, Australia, Asia, New Guinea, and Brunei.

Monitor lizards are readily found in parts of Africa, Asia, and in some islands of Oceania as well. They can also be found in certain parts of America. However, America is not their natural habitat, and thus the lizards are considered to be invasive species.

What is a Monitor Lizard's habitat?

Depending on the species, the animal's natural habitat varies. Monitor lizards can adapt to a vast array of habitats. They can be found living on trees and even in semi-aquatic habitats.

Who do Monitor Lizards live with?

Monitor lizards are often found living on their own. However, groups, as big as 25 individuals, are also common in the ecosystem.

How long does a Monitor Lizard live?

The lifespan of monitor lizards varies from eight to 30 years.

Monitor lizards, like any other reptiles, reproduce through mating and laying eggs. After two months of mating, they lay eggs.

Although the species is not extinct yet, they are endangered, hence protected under the Wildlife Protection Act, 1972. The main threats to monitor lizards are human beings. It can be divided into three further parts including habitat destruction, international trade of reptile skin, and human consumption.

The body of monitor lizards is covered in scales, colored green, tan grey, or brown. The reptiles are large in size with long, powerful tails, and exceptionally long necks. Along with well-developed limbs, they have pretty strong claws.

The species do not look particularly cute. However, they are exceptionally shy. They prey on animals including snakes and small mammals such as deer. Given their nature, it would be more appropriate to call them wild than cute.

Monitor lizards use body postures, smells, and sounds to communicate with each other.

How big is a Monitor Lizard?

How fast can a Monitor Lizard move?

Depending upon different species of monitor lizards, their average pace changes. For instance, the Komodo Dragon has a speed of 12.42 mph or 20kph. Many Australian monitor lizards are also known to have great speed.

How much does a Monitor Lizard weigh?

There are no specific names for the male and female species of the monitor lizard. It means irrespective of the gender the animal goes by the name of monitor lizard.

What would you call a baby Monitor Lizard?

They are omnivorous animals, as stated before, which means that they eat other animals. The monitor lizard prey on a variety of insects and animals, including small mammals, snakes, fish, and crabs. However, deers make up 50% of the diet of an adult monitor lizard. Monitor lizards kill their prey after pursuing them by chasing or swimming after them.

Monitors are venomous. However, the impact of their venom on the human body is extremely mild. Therefore they may not be able to kill humans.

No, they would probably not make a good pet. It might not be the ideal choice for a pet as a monitor lizard pet is a lot different to deal with than any other regular pet such as a dog or a cat. Their strong feet, long necks, sharp nails indeed make them an interesting animal, but surely not an ideal pet.

Monitor lizard includes Komodo dragon, which is the largest species of lizard alive today. Thus, they are a kind of monitor lizard.

Lace monitor lizard facts state that they are the second-largest lizards found in Australia.

In Africa, Nile Monitors are the largest lizards, according to Nile Monitor Lizard Facts.

Previously, monitor lizards went by the name of 'Monitory Lizards', but the term became obsolete by 1920. Varanids' sporadic habit of standing on both rear legs and seeming to 'monitor' or their alleged habit of 'warning people of the presence of poisonous creatures' may have inspired the term.

In many states, it is not illegal to own an earless monitor lizard. However, it often requires a special permit. Even if someone becomes able to get the permit, taking care of the monitors can be quite hazardous.

Here at Kidadl, we have carefully created lots of interesting family-friendly animal facts for everyone to discover! Learn more about some other reptiles including the sand lizard and the bog turtle.

You can even occupy yourself at home by drawing one on our monitor lizard coloring pages.