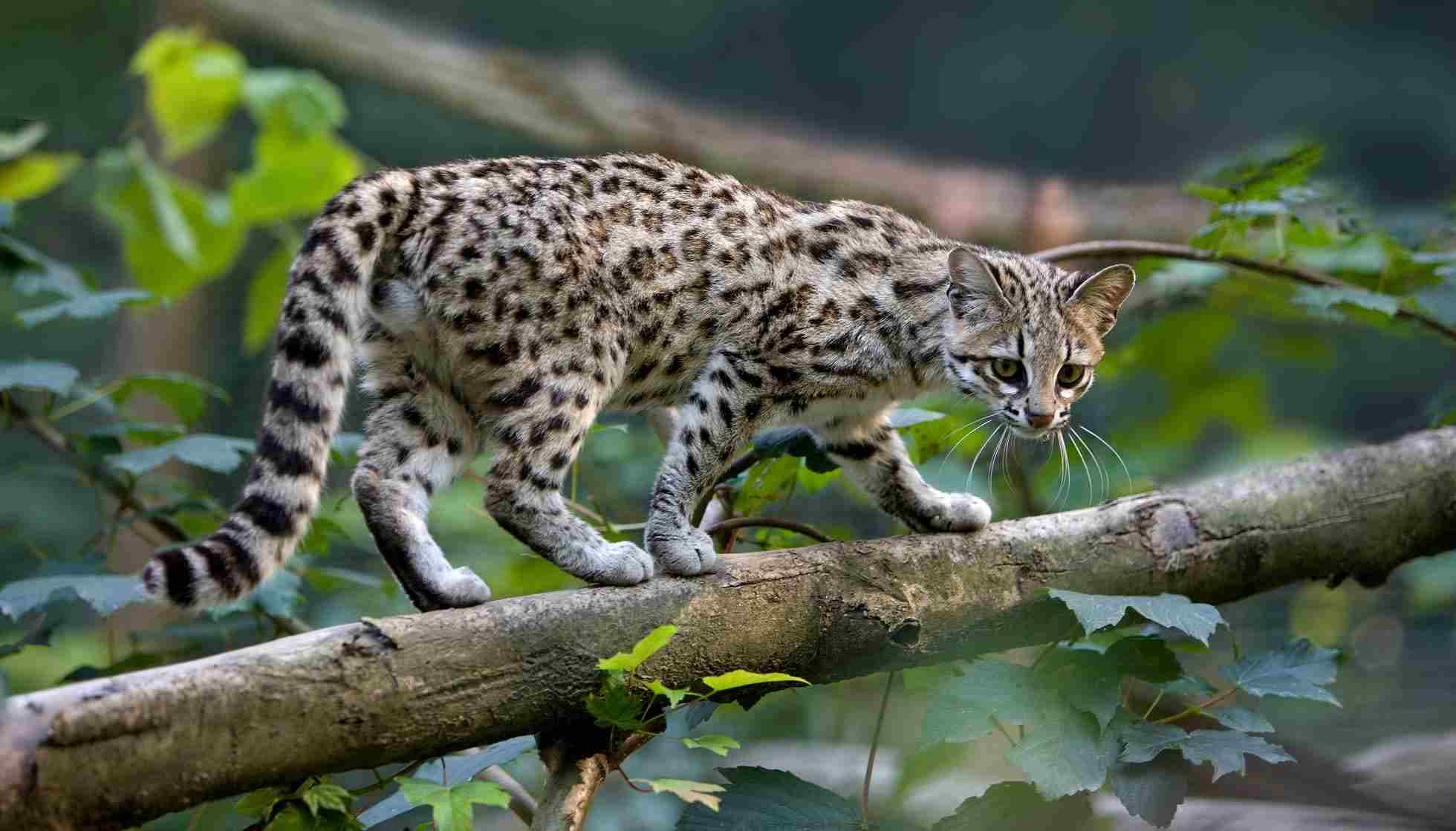 Are you a cat lover and want to learn about different breeds of cats? Then you will love to learn about this wild cat. The oncilla (Leopardus tigrinus) is mainly found in tropical forests of South America and central Brazil. The color range of these animals is a pale yellow to darkish brown. This tropical cat is blessed with rosettes all over its body and is also popularly known as the little spotted cat. Although the exact year of the cat's discovery is unknown, in 2013 some scientists argued there are two populations of the oncilla. It is said that the southern tiger cat (Leopardus guttulus) was previously the same species as the oncilla. These animals, found in Brazil, are nocturnal predators and prey on small mammals, birds, and rodents. They have sharp teeth and extraordinary hearing abilities that make hunting easy for them. According to the IUCN Red List, their population is Vulnerable due to habitat loss and hunting. The pelt of these cats is sold at a high price in trade markets and this attracts hunters. Keep on reading to learn more interesting facts about this cat.

If you want to learn more about interesting animals, check out the cheetah and the jaguar.

What type of animal is an oncilla?

What class of animal does an oncilla belong to?

Oncilla, being a cat species, belongs to the Mammalia class of the animal kingdom. It is a member of the family Felidae and genus Leopardus. The scientific name of this little cat is Leopardus tigrinus.

How many oncillas are there in the world?

The population of this species has been drastically decreasing. According to the International Union for Conservation of Nature or IUCN, the number of these wild cats living in this world is somewhere between 8,932-10,208. Habitat loss and hunting are the two major factors responsible for their poor population status.

Where does an oncilla live?

An oncilla in the wild is generally found in the tropical forests of South America. Some populations are also spotted in areas of Central America. The oncilla distribution in Central America ranges from Costa Rica to Panama. Forests of central Brazil also have some populations of oncillas. A few of these species reside in the northern and central parts of Argentina, but this number is relatively low.

What is an oncilla's habitat?

Oncillas are wild cats that reside in forest habitats. They do well in a tropical forest as well as a rainforest. In areas of Costa Rica, they are found at 4,900-9,800 ft (1,500-3,000 m) above sea level. These wild cats are generally terrestrial species, but they are great climbers. They can climb up in trees quite easily to prey or get away from potential danger. Due to habitat loss, the oncilla's range has expanded to subtropical forests. A few of their populations have also settled in grasslands and savannas.

Who do oncillas live with?

These small spotted cats are solitary in nature. They prefer doing daily activities independently. However, this solitary nature changes during the mating season. They become more social with each other with the intention of mating and are often seen to form groups or pairs.

How long does an oncilla live?

In the wild, oncillas can live a healthy life of 10 to 14 years. It has a very high infant mortality rate in captivity. However, if a domestic oncilla baby survives, it can live a very long life. Under the right conditions, the lifespan range of this species in captivity is somewhere between 16 to 20 years. There are cases of pet oncillas living up to 23 years, which is pretty long compared to other cats.

It takes oncillas at least two years to reach their sexual maturity. After reaching their maturity, a female cat goes through an estrous cycle or heat period for three to nine days. When an older oncilla is bred, its estrous cycle is shorter than a younger cat. The breeding season of captive oncillas is generally throughout spring, but the breeding season of these cats living in the wilds is unknown. After a gestation period of about 76 days, one to three kittens are born. The gestation period depends on the oncilla's age. Sadly, the kittens have a high mortality rate. The young kittens are taken care of by their mother and the males are not involved after mating. The weaning period of these kittens goes on for three months. After four months, the kittens no longer need support from their mothers. These kittens take about 11 months to fully grow.

The conservation status of oncillas (Leopardus tigrinus) is currently listed as Vulnerable in the International Union for Conservation of Nature, or IUCN, Red List. Most species having forest habitats are facing a major habitat loss. Forest fires, residential and commercial developments are some of the reasons behind their threatened habitats. Oncillas living in forests of Central and South America are no expectation. These wild cats face other threats like hunting and pollution. Many hunters target terrestrial animals even though it's illegal. These cats are targeted for their pelt, which can be sold at a high price in the trade market. The high infant mortality rate in captive cats also adds to the list of factors affecting their population. The population of these cats is decreasing drastically and proper measures should be taken immediately.

These small cats have thick yet small fur covering their body and tail. The color range of these animals is from pale yellow to dark or orangish brown. Sometimes gray and black colored ones are also spotted. Their entire body is covered with rosettes. These rosettes are generally dark brown with a black outline. They are blessed with long ears and sharp teeth. These teeth help them hunt better.

The physical characteristics of an oncilla make them look extremely cute. Their small size and rosettes only add to their cuteness.

Oncillas, primarily found in forests of Central and South America and Brazil, communicate like every other cat in the world. They use vocalizations and signals like 'purr', 'meow', or 'gurgle' to convey their messages. To interact with humans, they generally use 'meow'.

They have long ears with great hearing abilities. They use this ability to look out for danger or listen to the footsteps of other animals.

How big is an oncilla?

Oncillas are small wild cats. The oncilla cat size range from 15-23 in (38-59 cm) for their body and the length of their tail range somewhere between 7.9-16.5 in (20-42 cm). The largest domestic cat breed, the Maine Coon, is almost twice the size of a fully grown Oncilla.

How fast can an oncilla run?

Oncillas are nocturnal hunters and they can chase their prey with great speed. However, the exact speed of these small wild cats is not known.

How much does an oncilla weigh?

An oncilla size is quite small. Even though they have thick fur, the weight of oncillas is somewhere between the range of 3.3-6.6 lb (1.5-3 kg).

What would you call a baby oncilla?

Oncillas are nocturnal predators. They take advantage of their climbing ability to hunt better. An oncilla's prey includes rodents and small mammals like mice, squirrels, rats, hamsters, and more. They can quite easily prey on birds. Oncillas have a very specific way of dominating their prey, once they set eyes on their prey, oncillas sever the brain stem of the species by piercing their skull, which results in the immediate death of their prey. Oncillas are noticed to feed on giant lizards as well. Even though oncillas are primarily carnivores, they have been spotted feeding on grass at times.

Oncillas living in captivity need a proper diet to survive. Protein is an essential part of their diet, and they should be fed meat-based food regularly.

Oncillas are quite aggressive animals. They are often seen to fight among themselves. The males of this species often tend to be aggressive towards the females and attempt to dominate them. Oncillas are quite small-sized cats, but they are not scared of picking fights with animals bigger than them. Cases of oncillas killing a bigger animal is not uncommon. They can also be very aggressive and quick on their feet when they feel threatened.

As oncillas are mainly solitary animals, they can end up being aggressive to their owners and even bite them unintentionally. As they are primarily carnivorous, they have pretty sharp teeth. So, it is wise not to force them to cuddle or make them do anything they don't want to. However, Oncillas cannot kill humans.

Oncilla tends to have a longer lifespan in captivity even after their high infant mortality rate. Oncilla shares a few characteristics with a regular domestic cat, and so they can be trained to make good pets. However, it would help if you kept in mind that they are solitary species and would not be an ideal pet to cuddle with. Since they are primarily predatory in nature, their diet should be very closely monitored. It can be adopted from pet markets or online. An oncilla's cost can be as high as $100. However, the availability of oncillas has decreased. Due to their population status, they are not as easily found in shops or online anymore.

There's a lot of confusion about the pronunciation of oncilla. They are pronounced as 'awn-sill-uh'.

The oncilla positively affects its biome by preying on pest species and not letting them get overpopulated.

The debate of oncilla vs. ocelot has been going on for a long time. People often confuse the two species, but they have quite a few differences. Ocelots are bigger than oncillas, however, oncillas tend to have larger ears.

Oncillas are noticed to have a variety of colors and rosettes. However, one out of every five oncillas is completely black. Their fur, tail, and ears are black, and these all-black oncillas are generally found in the denser parts of the forests.

How is an oncilla adapted to its environment?

Oncillas are primarily terrestrial species, but they are agile climbers. They can cover great distances by climbing. Their furry tail helps them balance while climbing the treetops. Oncillas are also great swimmers, which helps them adjust better to their environment.

Physical traits like their coloration help them camouflage quite easily and hide from hunters or potential predators.

Here at Kidadl, we have carefully created lots of interesting family-friendly animal facts for everyone to discover! Learn more about some other mammals including the Sumatran tiger and the Amur leopard.

You can even occupy yourself at home by drawing one of our oncilla coloring pages.