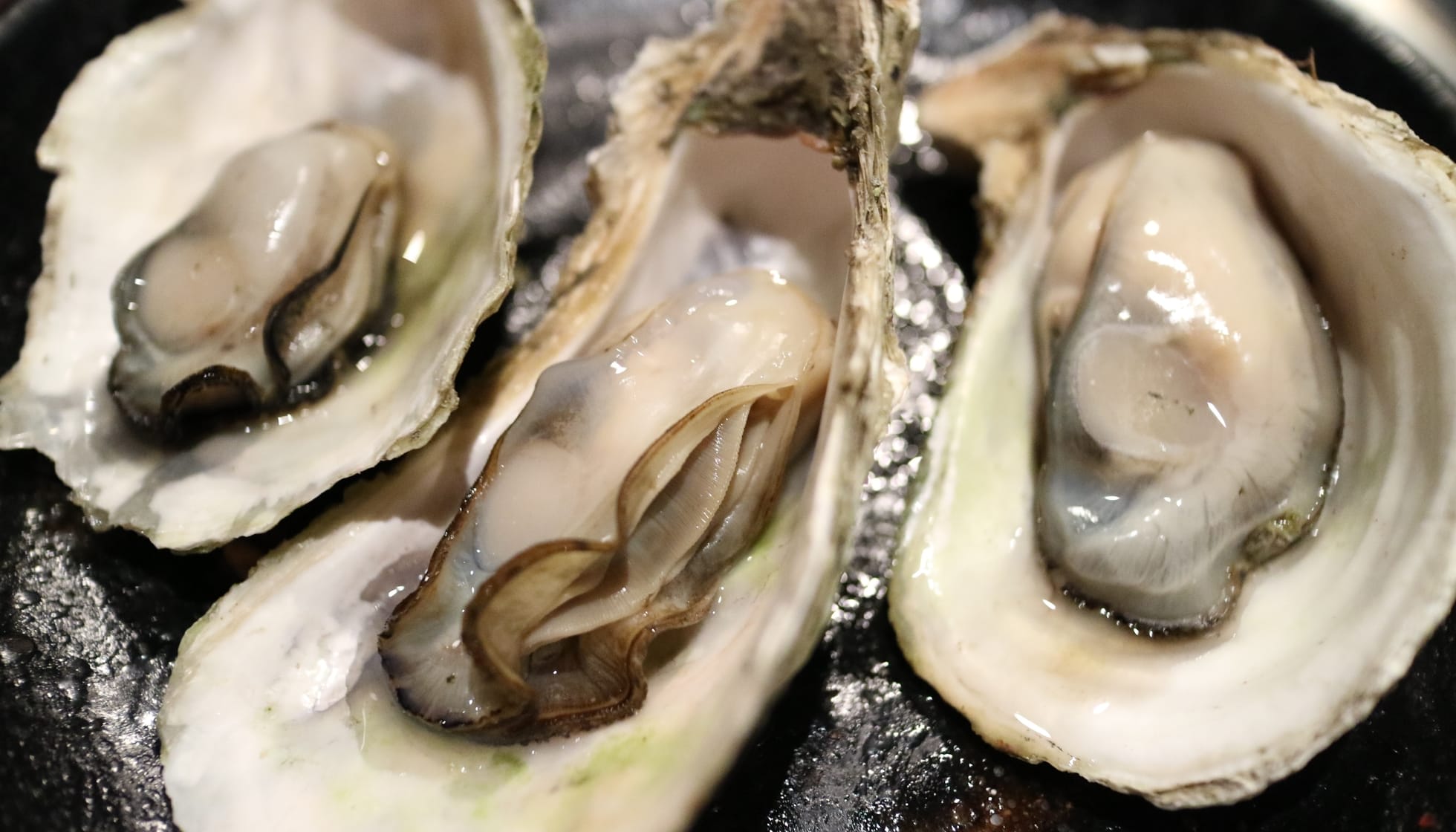 Oyster (Crassostrea) is the collective name for many different families of salt-water bivalve mollusks found in marine or brackish waters around the world. These animals are essential for the water ecosystem across the world. Some types of oysters are considered a delicacy and consumed raw or cooked. The pearl oyster is harvested for the pearl it produces. The true oysters are also known as European flat oysters, eastern oysters, Pacific oysters, Olympia oysters, and Sydney rock oysters. Pearl oysters can be harvested from freshwater and saltwater regions. Pearl oysters belong to the family of the feathered oyster. There are other varieties of oysters that are edible or produce a pearl, such as thorny oyster, pilgrim oyster (also known as the scallop shell of St. James), saddle oyster, and dimydarian oyster. While the conservation status of these animals is of Least Concern, acres of oysters beds are being lost every year as suggested by surveys.

The most popular and heavily harvested species of water oyster is the American oyster which is found in the Atlantic ocean from Canada to Argentina and the Pacific oyster (Crassostrea gigas) found from Japan to Washington state, also near Australia. Oysters are capable of changing their sex once or more during their lifetimes. The oyster is known as a keystone species which provides habitat for many marine species. The sea anemones, hooked mussels, and barnacles are known to live on oyster reefs. Oysters filter large amounts of water to feed and breathe.

If you enjoy these facts, please read our facts on slipper lobster and atlas beetle.

What type of animal is an oyster?

Oyster is a type of marine animal found in the salty water of the oceanic world. They have strong abductor muscles which help them shut their shell tight and hide in it on sensing danger.

What class of animal does an oyster belong to?

The oyster is an amphibian. They are found in clusters on rock, reefs or other hard surfaces. These creatures perform an important function in maintaining the ecosystem in the oceans.

How many oysters are there in the world?

The exact number of oysters is difficult to say. But the animals are found in abundance around the world. However, loss of habitat and increasing sea pollution could be detrimental to their population.

Where does an oyster live?

Oysters are found mostly in brackish habitats of the ocean. The brack water is more saline than freshwater but less saline than seawater. An oyster reef provides places for other smaller animals to live and survive. An oyster reef can increase the area of a flat bottom by almost 50 times. Some areas where oysters are found include Chesapeake Bay and the Gulf of Mexico.

What is an oyster's habitat?

Oysters are found in oyster bays like oceans and freshwater along the coast. They are highly popular as delicacies and are sought after for their pearls. Many varieties of oysters are harvested for these purposes.

Who do oysters live with?

The oyster lives in large colonies known as oyster reefs. These colonies are home to other smaller animals and larger predators who come to eat them too. It is a world of their own.

How long does an oyster live?

The oyster can live for 20 years in captivity. They may live for a shorter duration in the wild, due to human consumption and predators.

The oyster reproduces using the broadcast spawning method on oyster beds. In this method, the male and female release eggs and sperm into the water, and the eggs are hatched in the water. After a seven to 10 day gestation period, the live oyster is released. Oysters can change their sex more than once during their lifetime. They will spawn the eggs as males during the first year. Over the next two to three years, when they develop enough energy reserve, they will spawn as females by releasing the eggs. A single female oyster is known to produce up to 100 million eggs annually. Once the larvae develop, they will find suitable sites, usually, another oyster shell to settle on. This attached oyster is called a spat.

Oyster’s conservation status is of the Least Concern as they are found in large enough quantities around the world. Oysters are also harvested for eating and other reasons. But surveys show that the Chesapeake Bay is losing around 2,600 acres of oyster beds every year.

They have round, oval, or irregular-shaped shells. The shell color is whitish-grey and the insides are usually pristine white. They do not have a complete nervous system. Some oysters have two sexes, the male and female reproductive organs, which contain both sperms and eggs.

They are strange looking beings. They do not have normal physical features like most animals or amphibians. They are different and may be cute because of that. They have tough shells on the outside and colorless or white bodies inside with colorless blood.

The pearlfish or the pearl oyster is known to send pulsing noises from inside their shells. These insides amplify their noises and send them across the ocean. Oysters are also known to close their shells in response to low-frequency sounds.

How big is an oyster?

Oysters will move once when they are at the larvae state in order to attach themselves to an existing oyster shell. These oysters are called spat. Once they attach themselves, they do not move.

How much does an oyster weigh?

Oysters do not have separate male and female species. In fact, they can change their sex during the course of their life. They can change it more than one time. Some oysters also have both the sexes in them, with the reproductive and sexual organs of males and females.

What would you call a baby oyster?

The baby oyster can be called larvae when they have just hatched out of their eggs, and once they attach themselves, they are called spat.

Oysters eat plankton or small bits of algae suspended in water. They draw water through their gills through beating their cilia. The food gets stuck in the gills' mucus and from there it's transferred to their mouth, where they are eaten and digested.

They are not dangerous at all. While consuming them, you have to be careful that they are sourced out well and that they are fresh. Sometimes, they tend to capture toxins from the others suspended in the water or from other plants or small organisms which may not cause harm to them, but they may be harmful to us.

They are harvested for various purposes. You can keep them as pets in your home aquarium and take care of them.

Oysters can be a good option for man-made sea walls built to prevent damage from storms.

More than 85 percent of the world's oyster reefs have been lost.

Some predators attack the oyster not to eat them but to capture their shells. Like the boring sponge will enter the shell, kill the animal and take over the shell as their home.

The oyster flatworm or the oyster leech will go after the younger oysters. After killing the animal, they will use the shell to protect their eggs.

They can retain toxins in their shell, which makes them dangerous for human consumption.

The oyster is known as an ecosystem engineer. It also influences nutrient cycling, habitat structure, biodiversity, and food web dynamics.

The accidental and intentional introduction of varied oyster species has harmed the native oyster population negatively.

The underwater noise pollution has also impacted the oyster reefs negatively. It impacts their ability to hear the waves and currents to regulate their circadian rhythm and perception of weather events.

Can you eat oysters?

Yes, oysters are edible and they taste like their natural habitat, or taste like butter, or cream, melons, or cucumbers. They taste sweet, salty or briny, and rusty. They are found across the world in a variety of species. They are eaten raw or cooked by steaming, pan-seared, poaching, smoked, fried, or any other way.

What is special about oysters?

They do not have a central nervous system and cannot feel any pain.

They have eyes all over their bodies. Oysters are filled with rich vitamins and minerals like zinc, calcium, magnesium, protein, selenium, and vitamin A. They have a high level of Vitamin B12, iron, and monounsaturated fats.

Here at Kidadl, we have carefully created lots of interesting family-friendly animal facts for everyone to discover! Learn more about some other arthropods including giant african millipede, or atlas beetle.

You can even occupy yourself at home by drawing one of our oyster coloring pages.