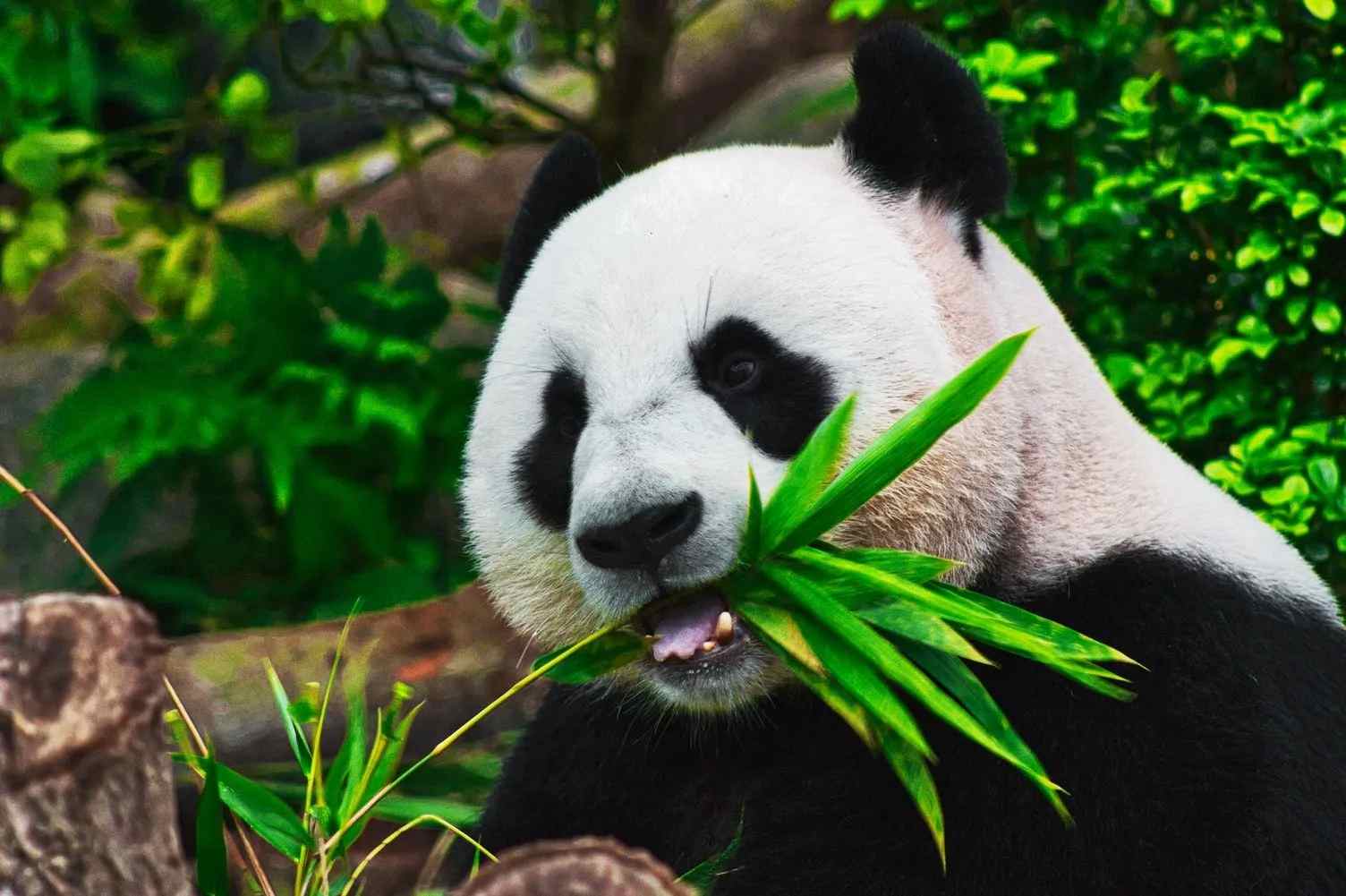 If you love to cuddle your teddy bears and have a collection of them, then for sure, you will love this large adorable panda teddy bear with black and white fur. And if having a panda teddy bear doesn't satisfy you and videos on the internet make you more curious, pack your bag and go on a trip to China to see their national treasure in the wild.

Pandas are one of the most loved adorable animals globally, and many conservation organizations are actively participating in protecting their population. But, of course, humans are their main threat and hence their status is Vulnerable, with only a handfull left in nature.

One of the eight species of large bears, these pandas spend most of their time alone feeding on bamboo. Please read this article to find out more about pandas, in general, to find out many interesting facts about them. For more relatable content, check out these Qinling panda facts and giant panda bear facts for kids.

What type of animal are pandas?

The pandas are basically bears. They are also known as panda bears and bamboo bears. It is also sometimes called a large bearcat. The scientific name of the giant panda translates to a black & white cat-footed animal.

What class of animals do pandas belong to?

Giant pandas (Ailuropoda melanoleuca) belong to the Mammalia class of the Ursidae family, which consists of eight bears.

How many pandas are there in the world?

According to the WWF report, there are only 1,864 pandas left in the wild. They are a vulnerable species, and their population remains scattered due to poorly planned infrastructure projects in their habitat regions.

Where do pandas live?

Panda lives in the bamboo mountain ranges of south-central China. In particular, they are found in the Sichuan, Shaanxi, and Gansu provinces.

What is a Panda's habitat?

Giant panda prefers temperate forests with bamboo in the mountain ranges at higher altitudes in China. Their natural habitat is mountainous, mixed deciduous and conifer forests with thick bamboo undergrowth that they can eat. Once found in lowland regions, they are now restricted to the mountains due to the clearance of forests for farming. During summer, these pandas climb as high as 13,000 ft (3962.4 cm) on the mountain slopes.

Who do pandas live with?

Giant pandas are very solitary animals and spend most of their time eating bamboo and lazing around alone. They pair up with each other only during the breeding season. After that, the young stay with their mothers for a year and a half. Red pandas, snow leopards, red-and-white flying squirrels, Tibetan macaques, and golden snub-nosed monkeys are a part of the biodiverse ecosystem where giant pandas live.

How long do pandas live?

The lifespan of giant pandas is 20 years in the wild. However, Xin Xing panda of China has a world record of living for 38 years. In general, pandas are lazy, solitary animals that move only to eat and live a long life in their natural habitat if undisturbed. However,  jackals, leopards, and yellow-throated martens, a type of weasel, are a threat to panda cubs.

Giant pandas reproduce by the sexual reproduction process. Their breeding season is during the spring. Pandas have a long mating ritual, and females select the male. However, a male panda may mate with multiple females in the wild during the breeding season. The incubation period is from 90-180 days, and mostly a single cub is born. However, sometimes twin birth takes place, but mostly one survives. After delivering, the mother panda grows weak and can not feed two cubs since these cubs are born blind and furless and depend on their mother for milk and food, warmth, and protection for more than two months. The young stick to their mother for more than two years before being on their own.

According to the WWF organization and the IUCN Red List, the giant panda falls in the Vulnerable category. Earlier, these were categorized into the Endangered species category. But with proper conservation efforts by the people of China and others, there is a little improvement in the panda population. But in the first place, the population of these pandas reduced drastically because of their habitat destruction caused by the unplanned development activities of humans. The giant panda is a lovely black and white large bear. It has fur that has a combination of these two colors. The black color is dominant in the ears, eye patches, muzzle, legs, and shoulders regions. The pandas' eyes are different from other bears. The pupil has vertical slits just like that of domestic cats. In addition, they have enlarged or extended wrist bones that function as opposable thumbs giving them a strong grip.

The giant panda is an adorable animal. Their cuteness is so very famous that many toys replicating them are a favorite to many. Their black and white combination fur with shiny eyes make these animals all the more attractive. However, in the wild, never go anywhere near the giant pandas inspired after watching the lovely videos of these bamboo-eating bears on the internet.

How big are pandas?

The giant adult panda stands tall between 4-6 ft (1.2-1.8 m) in height. Males are larger than females. When on four feet, their shoulder length is between 2-3 ft (61-91.4 cm). Giant pandas are almost about the same size as a North American black bear.

How fast can pandas move?

The giant panda loves to laze around. And slowly move in their habitat, eating bamboo. The maximum speed at which a panda can move is 60.2 mph (96.9 kph).

How much do pandas weigh?

What would you call a baby panda?

The main diet of a giant panda is bamboo. Pandas eat anywhere between 20-40 lb (9.1-18.1 kg) of bamboo for many hours a day to meet the nutrient requirements for their health. Rarely do they also eat pikas and other small rodents and sometimes fish as food. In addition, their diet includes sugar cane, rice gruel, carrots, apples, sweet potatoes, and special high fiber biscuits in zoos.

Yes, they are dangerous animals and are aggressive in nature when provoked. They have very strong grips and also deliver powerful bites when provoked or approached close enough. However, there has been no record of pandas killing humans.

No, they do not make good pets. However, they look cute and adorable and look cuddly. They are nowhere close to taking in as pets. They are strong, healthy animals and their bite can be injurious. Also, giant pandas eat a lot of bamboo trees, and their dietary requirement is huge. Above all, the Chinese government owns the pandas, and owning, selling, or buying them isn't permitted. Of course at Dujiangyan Panda Base and Center for Disease Control is one place where panda cubs can be cuddled under supervision.

China owns the giant pandas. The pandas are legal property of China that are leased out to different nations in the world to exhibit in zoos.

The WWF logo is a giant panda that has become a symbol of the wildlife conservation movement worldwide.

Snow leopards that share the habitat with giant pandas are a threat to them.

The young ones of giant pandas, koalas, and hippos eat the feces of their mothers to obtain the gut bacteria required to digest the vegetation like thick bamboo.

They can climb trees and also swim.

If you can find a brown and white panda, you may be looking at Qinling panda, a subspecies of giant pandas.

Pandas fossils are dated back to 1-2 million years ago.

There are two Pandas in the world: the giant panda and the red panda. And both are near endangered species.

Both the pandas show similarities in their diet, habitat, and behavior. They constantly spend their time eating bamboo many hours a day and move around very slowly. However, red pandas can travel at higher speeds than giant pandas.

While the giant panda is found in China, a red panda can be seen in India, Nepal, Tibet, Myanmar, and China. At present, both the pandas co-exist in nature in the Sichuan mountains in China.

A red panda is similar to a squirrel raccoon with reddish-brown fur, while the giant panda is more like a bear with black and white fur. Hence both are popular as bearcats. However, a red panda is half the weight & size and has half the lifespan of a giant panda.

Once widely found in the bamboo forests of China, the number of these cute pandas in their natural habitat reduced drastically. The reason behind the decline in their number is mainly humans. So-called human development activities intervening in their natural habitat led to the scattering of these pandas. Also, poaching for their fur was a major issue. Of course, national laws and nature conservation measures, and awareness programs in China have checked this issue. Also, the bamboo plantations program to meet the food requirement of a panda in the wild is a good development. And fortunately, few wildlife conservation programs are putting efforts to conserve the panda population in the wild. They are also captive-bred and protected in zoos.

Here at Kidadl, we have carefully created lots of interesting family-friendly animal facts for everyone to discover! Learn more about some other mammals from our red panda facts and Asiatic black bear facts pages.

You can even occupy yourself at home by coloring in one of our free printable panda coloring pages.