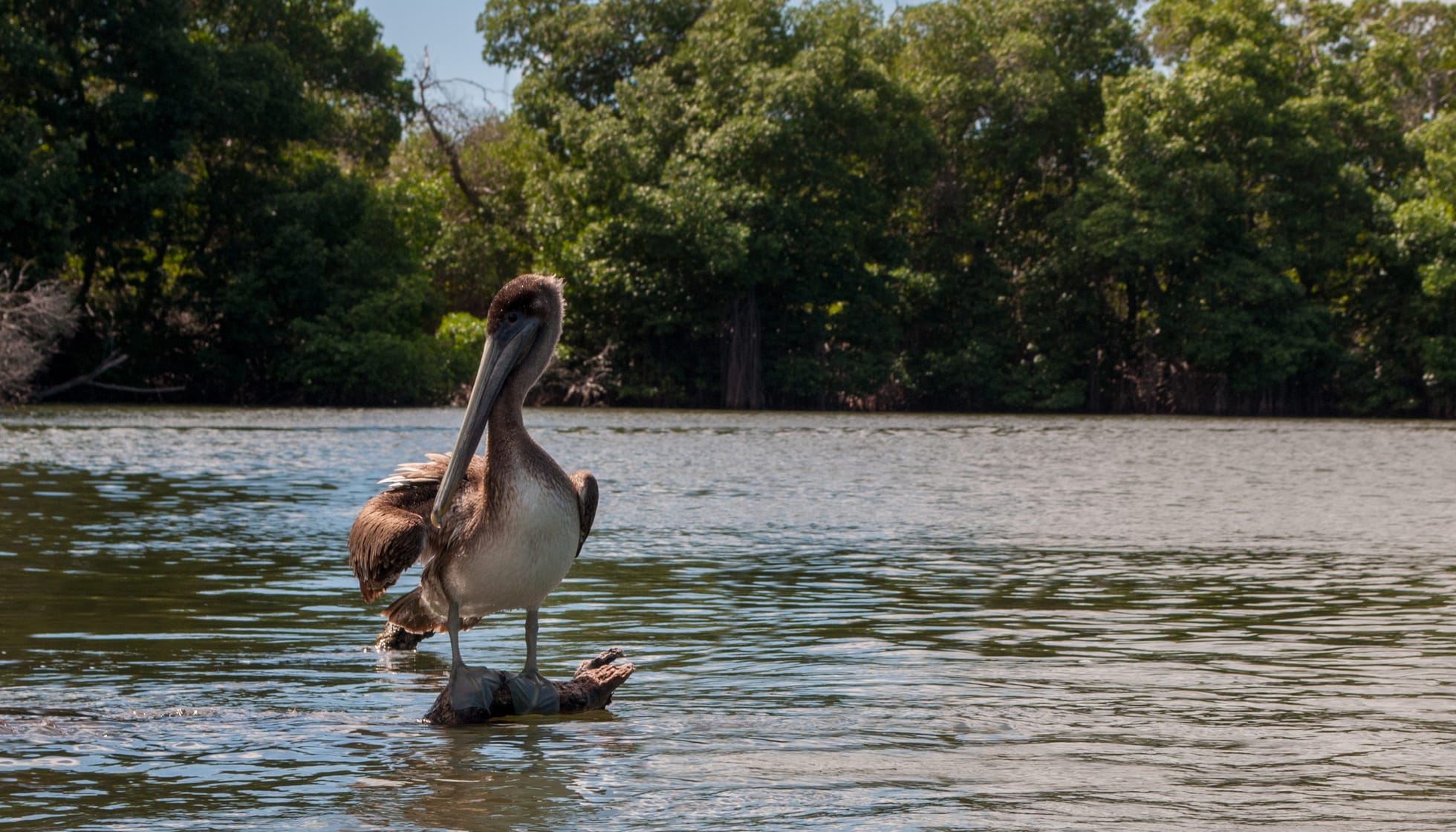 Pelicans are distinguished by their large colorful bills and large elastic throat pouches. These species of birds are found near fishing ports, estuaries, along coastlines, bays in many parts of the world, particularly in the Caribbean Islands and Central America. The pelican diet mainly consists of fish, which they catch by scooping them up from shallow water by using their extensible throat pouch. Pelicans have also been noted to eat other small birds.

Pelicans have been found in European legends and stories which talk about their great sacrifice to rear their offsprings. As a result of these legends, these species of birds are generally associated with love, sacrifice, and motherhood.

Pelicans sleep on land either by resting on their breast and stomach or while standing on both their feet. They tilt their beaks towards the side and rest their heads sideways on their shoulder.

If you like this article and want to read more about animals, read these interesting animal-related articles on the ostrich and the emu.

What type of animal is a pelican?

Pelicans are birds with unique bills and are natives of North America.

What class of animal does a pelican belong to?

Pelicans belong to the Aves class of the Animalia kingdom.

How many pelicans are there in the world?

The IUCN has estimated that the total breeding population of the brown pelican is estimated at 650,000 individuals, and the great white pelican stands at 180,000.

Where does a pelican live?

The pelicans are usually found in arid islands or near coastal water. They avoid the open seas or are rarely seen far off-shore. They are normally spotted near fishing ports, estuaries, along coastlines, bays, and occasionally in mangroves.

What is a pelican's habitat?

Brown pelicans are found in almost all American countries along the Atlantic, Pacific, and Gulf Coast. They remain in the U.S. Virgin Islands, Puerto Rico, and along the southeastern coast throughout the year. Some of the countries in which the brown pelican is found are the Dominican Republic, the United States, Guyana, and Guatemala. These birds migrate to central California during the winter season and spend the summer in the mid-Atlantic and northwest coasts.

The great white pelican is found in countries such as Costa Rica, Mexico, Cuba, and Canada. 2

These birds are found in almost all continents, except Antarctica. The pelican habitat as understood from the names of the places they are found in is extremely diverse and would therefore hold testimony to the pelican's ability to adapt and survive.

Who do pelicans live with?

Pelicans are very social birds and gregarious in nature. Hence they live in large flocks all throughout the year.

How long does a pelican live?

A Brown pelican (or the black pelican) has a lifespan of 15 - 43 years, while the American white pelican has a much shorter lifespan of 26 years.

Both the brown pelican and the American white pelican are serially monogamous in nature and mate with only one partner during the entire breeding season. The breeding season of the American white pelican lasts from March to May, while that of the brown pelican lasts throughout the year in Tropics and only during the spring season in Northern parts. The male pelicans settle on a nest and defend it before courtship. The incubation period usually lasts for a little more than a month (28 - 36 days) and both the males and females share the nesting and incubation duties. Usually, a cluster of two or three eggs is laid. Pelicans breed in colonies.

These birds lack natural enemies, and the main threat to their population is humans who shoot them for sport or for using their feathers to make fashionable hats. According to the IUCN Red List, there are 650,000 brown pelicans and 180,000 white pelicans. They have been classified as Least concern (LC) and their numbers are increasing.

Pelicans (Pelecanus occidentalis) are easily identified by their comically large bodies compared to their short legs. They have long, broad wings and large, colorful beaks. These species have the largest beaks of all birds, with beaks even extending to 18 in (45.72 cm) in length in some species, such as the male Australian pelicans. They have long necks, webbed feet, and short, square tails.

Most of these birds have light-colored plumage, except for the Brown pelicans which have dull, dark brown feathers, and the Peruvian pelicans which have bright feathers. These species have a knob grown on the upper part of their bills, which sheds off post-breeding season.

The most unique feature of these birds is the large pouch that grows underneath their beak called the gular. There is a downward hook on the topmost part of their beaks with the help of which these birds catch fish.

Pelicans are not cute birds. Their large bills make them look quite terrifying, as well as how they tend to swallow their prey.

Pelicans use a variety of vocalizations to communicate with each other. They use various noises to attract mates, to interact with their group during nesting or during flight. They also use sounds to warn their colony of approaching threats and to protect their territory.

How big is a pelican?

How fast can a pelican fly?

How much does a pelican weigh?

What would you call a baby pelican?

Pelicans are carnivores and prey on sea fish mainly. Different types of marine life such as herring, pigfish, menhaden, mullet, and silversides serve as their food. Other food includes crustaceans such as prawns and salamanders. This bird is a keen-eyed predator and can spot fish even while flying 60 ft above the ocean. They can swoop in and catch their prey, scooping the fish in their pouches. These species of birds usually hunt in groups.

The brown pelican is the only species of pelican that dives from on high as the main method of obtaining food.

Yes, like most birds, pelicans are edible too. However, being sea birds, the food of pelicans involves a lot of fish and other sea life. Hence, the oil tends to be sticky and the meat is also tough and hard to chew because they tend to fly long distances.

No, pelicans do make a good pet. This sea bird is quite large and eats huge quantities of fish. Hence, it is not practical to keep this bird as a pet. Also, it is illegal in most places to own pelicans as pets.

Pelicans catch fish by forming groups. The group is shaped like the letter U and they start beating their wings. This beating of their wings drives the fish into shallow water and they can catch the fish easily by scooping them up.

Pelicans can hold up to three gallons of water in their throat pouch which is almost thrice the gallon of water they can store in their stomachs.

What do pelicans symbolize?

Pelicans are symbols of love, sacrifice, and motherhood. European legends and stories about these birds talk about how they sacrificed their own life and blood to save their offsprings. The pelican spiritual totem generally signifies social responsibility and dynamic attributes such as charity, teamwork, friendliness, and generosity. The bird is a reminder of self-sacrifice and the great length one go to protect their loved ones.

How many fish can a pelican fit in its mouth?

How to draw a pelican?

Here are a few simple steps for kids to draw cute pelicans:

Collect a picture of a pelican.

Draw a tilted oval as a guide for the pelican's body.

Draw a small circle above and to the right of the oval as a guide for the pelican's head.

Using two curved lines, connect the circle to the oval and form the pelican's neck.

Draw a line next to the pelican's head as a guide for the long beak.

Below the body, draw an angled line as a guide for the pelican's feet.

Here at Kidadl, we have carefully created lots of interesting family-friendly animal facts for everyone to discover! Learn more about some other birds including the tawny owl and the yellow-eyed penguin.

You can even occupy yourself at home by drawing one of our pelican coloring pages.