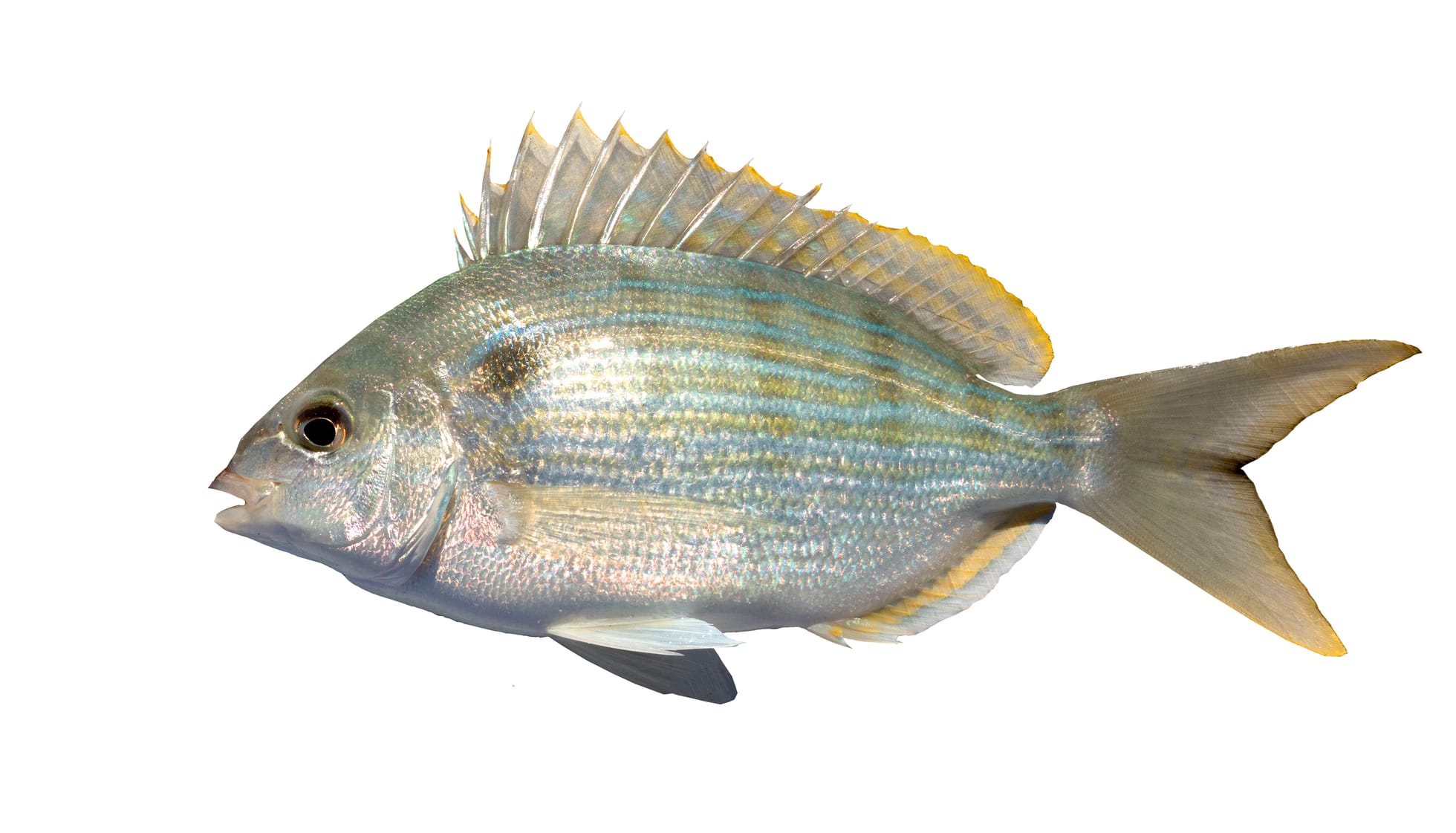 Pinfish (Lagodon rhomboides) are a genera of saltwater fish that belong to the family of sparidae. They are commonly denoted by a variety of names such as pin perch, sand perch, sea bream, and even butter fish. Among all these names, pinfishes are most commonly called pinfish due to one of their survival adaptations, which are sharp and rigid spines over their dorsal fins. They are saltwater fishes that can be found in coastal waters at different places around the world but are they are also known to travel in freshwater. This species can be commonly found in the Atlantic and the Gulf of Mexico. Young anglers use special pinfish traps to catch this fish, and these traps are are available at most bait and tackle stores.

Pinfish bait is used very commonly as these small-sized fishes are extremely useful to attract other fishes. Pinfishes are silver-colored fishes with a black dot on the side of their dorsal fin, which acts as an identity marker for this species. These fishes have their preferred habitat of shallow waters around Massachusetts, Texas, Mexico, Atlantic and Gulf coast. Some species have also been found near the Yucatán coast and certain Caribbean Islands. After reading these interesting pinfish facts, check out our other articles on tang fish and tetra as well.

What type of animal is a pinfish?

Pinfish (Lagodon rhomboides) belong to the family of sparidae and are a kind of fish. They are a small-sized species of saltwater fish that are popularly used as live bait, they are also known to be notorious for stealing bait. They prefer to live in areas with cover such as pilings, seagrass and jetties.

What class of animal does a pinfish belong to?

Pinfishes are amongst the thousands of species of fishes that are found in saltwater and freshwater all over the world. They belong to the class of actinopterygii and can be mentioned by different names such as pin perch, sand perch, sea bream and butter fish. Their preferred habitat is a seagrass covered region.

How many pinfish are there in the world?

It is almost impossible to estimate the total number of pinfishes around Texas, Mexico, Atlantic and the Gulf coast. There are around twenty two thousand species of fishes that can be found in shallow water around seas, oceans and rivers. The most common conclusion is that pinfish are in no danger of being Extinct in the near future, according to IUCN.

Where does a pinfish live?

Pinfish are among thousands of species that are commonly found in high salinity water bodies around the world, including Massachusetts, Texas, Florida, Gulf of Mexico, Cuba, Yucatan coast, and  Caribbean Islands. They are more commonly found in saltwater bodies in the United States of America. They are the most popular live bait used by fisherman to attract and catch other big fishes such as snook, ladyfish, red drum and grouper. Pinfishes prefer to live in seagrass communities.

What is a pinfish's habitat?

Pinfish habitats can be found in coastal regions around the world. These fishes are usually found in vegetated areas, pilings, and rocks in shallow water where there is cover and protection from predators. Generally, adult pinfishes are found 360 in (30 ft) deep in the water, whereas small or juvenile pinfishes seek shelter with cover such as mangroves, pilings, rocky bottoms, jetties and seagrass beds to protect themselves from predators. These fish also prefer high-salinity water as their habitat.

Who do pinfish live with?

Pinfish are small sized silver colored fishes that are rarely used to living in groups. These fishes are known to hunt and survive individually. But, some pinfishes are known to form groups called schools, especially in places that offer abundant amounts of food.

How long does a pinfish live?

There is no verified information available regarding the lifespan of pinfishes. Some scientists believe that these fishes are really fast reproducers and can have a long life span of up to seven years when held in captivity. However, most pinfish do not live that long. Their life expectancy decreases as they are hunted by predators and used by humans as live bait. Seagrass is also dying off which poses a grave threat to the longevity of pinfish.

Pinfishes are known to reproduce through external fertilization in water. They tend to spawn in offshore waters. Generally, pinfishes are known to lay around 7,000 to 90,000 eggs in one spawning season which are then fertilized by male pinfishes. These eggs hatch within 48 hours and small larvae float around in the water for days until they learn to hunt and feed themselves. Pinfishes reach sexual maturity at the age of one, and have been known to spawn in winter and fall. They are also known to lay eggs multiple times in a single spawning season which helps in keeping their population intact.

Pinfishes are small-sized silver-colored fishes that have formed strong teeth and rays over their dorsal fin to safeguard themselves from being eaten by predators. These fishes are very commonly found in saltwater and coastal waters around the world, and have been recognized under the category of Least Concern by the IUCN. They are under no threat of becoming Extinct in the near future, and are known to keep their population intact through fast reproduction. The farming of pinfish is organized on a commercial scale as they are often used as live bait. The only significant threat that they face is from seagrass die-offs.

Pinfishes belong to the category of small-sized fishes. They are silver in color and have vertical bars that are yellow and blue over their silver scales. They have oval and compressed bodies with a small mouth and broad jaw. They also have really strong molars and incisors. The fins are light yellow with broad blue margins. They are very commonly known for their twelve spiny rays that can be found on their anterior dorsal fin, and are adapted to protect themselves from predators. Lastly, they have a black dark spot just over their gill plate, which helps to distinguish them from other species.

Pinfishes are really beautiful looking fishes. They are also very docile and can cause no harm to humans until provoked, this is because their sting rays can puncture human skin. You can easily get these fishes at most bait and tackle stores. Despite this, their appearance makes them quite cute animals.

As per Texas Parks and Wildlife Department, there is no information available regarding the communication tactics of small sized pinfishes. No study has even proved that they have any specific set of skills that they might use to communicate with one another, unlike other species of fishes.

How big is a pinfish?

These small-sized fishes are known for their strong teeth and rays, and they generally grow up to the range of 5-15.7 in (12-39 cm). They are around five times the size of a worm. The juveniles of these fishes are so small that even young anglers can catch multiple pinfish juveniles with the help of a basic pinfish trap.

How fast can a pinfish swim?

Pinfishes, though usually small sized fishes, are eaten by a lot of predators. So in order to safeguard themselves, they are believed to swim at a rate of around 70 mph (112 kmph) to escape from predators.

How much does a pinfish weigh?

Pinfishes weigh around 3.3 lb (1.4 kg) on average. Their tiny appearance and size makes them perfect to use as bait,so they are widely used by anglers to catch other fishes in the water or lake.

What would you call a baby pinfish?

There is no specific name given to baby pinfishes, they are generally regarded as fry, larvae or juveniles. Juveniles are commonly spotted near seagrass beds.

Pinfish, also known as Lagadone rhomboids, are a saltwater fish that can be found in freshwater. They are known to have diets and food habits that vary according to their age. Juveniles, or small pinfishes, are known to have a carnivorous diet that consists of fish eggs, insect larvae, worms, amphipods, shrimps and other small invertebrates. These fishes have large variations in their diet as they grow. They are known to have a largely herbivorous diet when they grow older. Older pinfishes feed on plant such as seagrass, eelgrass, shoal grass, manatee grass and zostera marina. When the pinfish grows to a size of 4 in (10 cm) or more, they head to offshore waters and become herbivorous creatures.

These fishes are often used as bait for saltwater creatures such as red fish, tarpon, kingfish and blackfin tuna.

Pinfishes are not common pets as they are known to exist in offshore coastal waters. Even though they are known to tolerate high densities, and can grow and reproduce in tanks, they are only usually kept in tanks for breeding and to use as bait. They are not often kept as pets, but they don't show any sign of characteristics that would make them bad to keep as a pet.

Pinfishes derived their name from their adaptation, which are the sharp spines that are present on the dorsal fins of these fishes.

Pinfishes are also known to have really strong incisors which is a trait inherited from their genus lagadon. Lagadon means 'rabbit teeth' in Greek.

Pinfishes are one of the top choices for bait across tackle stores for both offshore and inshore fishing.

Pinfish are the dominant fish species in subtidal seagrass habitats of the Gulf of Mexico.

These fishes are known to swallow their food whole if it is small in size, but they break large food pieces into smaller pieces with their large incisors.

Pinfish (Lagodon rhomboids) are a monotypic fish and they are known by various other names. They do not have any diverse species, and are identified as famous live bait. They are silver-colored and have a black spot over their gill coat.

They fishes have adapted really well as saltwater creatures. They are also known to have special adaptations in order to survive such as the sharp spines on their dorsal fins. These spines help to safeguard these small fishes from their predators.

Pinfishes are known to have well-formed adaptations and traits that make them great members of aquaculture and are bred in large quantities to be used as bait. They have established their position as baitfish and are usually caught by fishermen for this purpose.

These fishes also travel in deep grass, or at the bottom of the water during winter in order to find food and shelter. They are more difficult to catch in the winter than when it is warm.

Here at Kidadl, we have carefully created lots of interesting family-friendly animal facts for everyone to discover! Learn more about some other fish including candiru, or fluke fish.

You can even occupy yourself at home by drawing one of our Pinfish coloring pages.