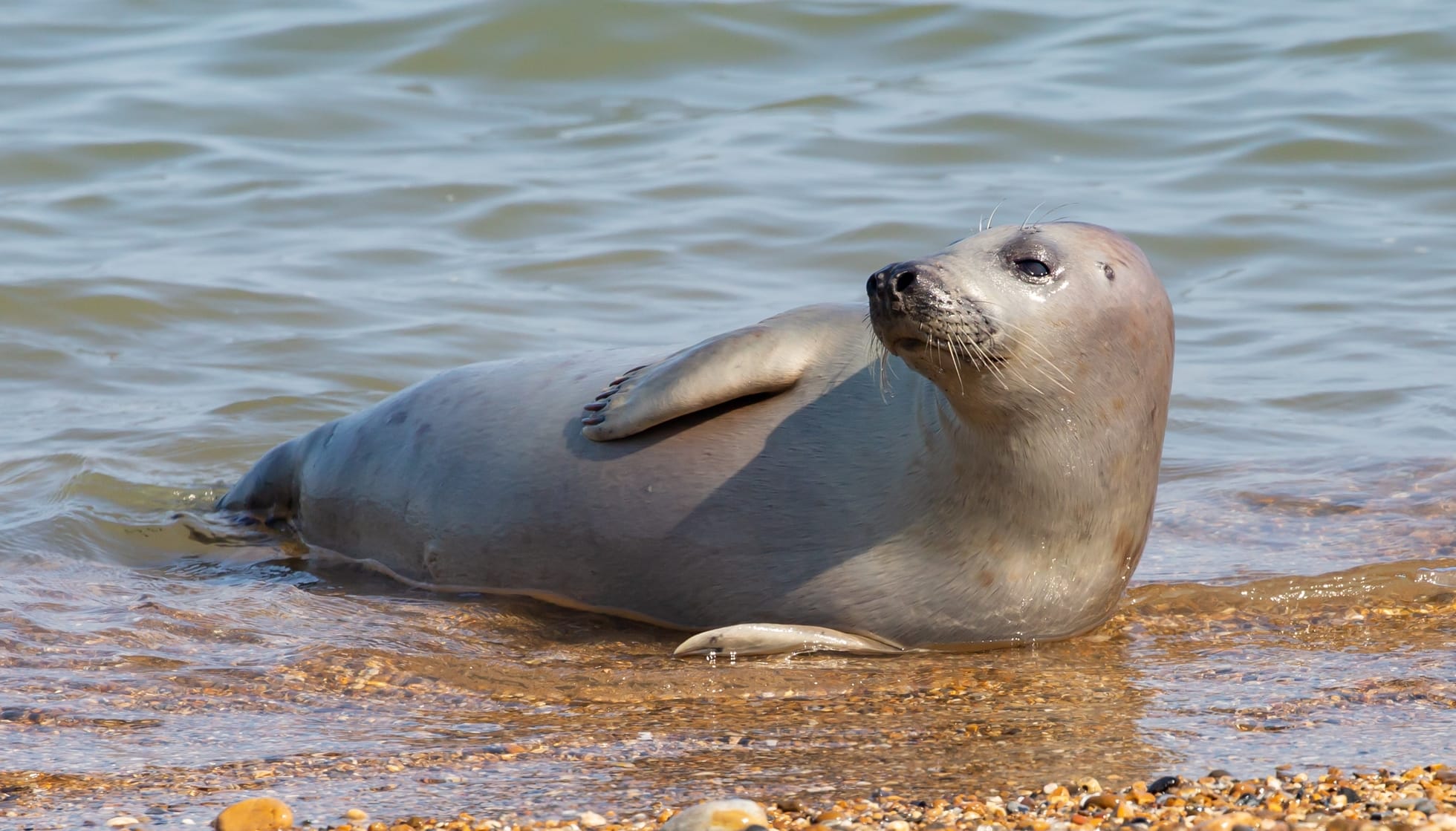 The word Pinniped means 'feather foot' or 'fin-footed' in Latin. Generally known as seals, they are shaped like torpedoes and have four webbed flippers for their spindle-shaped bodies as they have wide torsos and narrow hindquarters. These animals have adapted to be like amphibians and thus, have sensory organs that function well in both water and air. They have large eyes and well-developed and functioning whiskers which help them feed in dimly lit waters. Their tail is small which limits dragging. All the species of seals have short fur except walrus which have none. They are known to be visual predators as they have extremely short ears like fur seals and sea lion or sometimes lack external ear flaps like true seals but they have great hearing, especially underwater. They usually live in rich marine environments. Male Pinnipeds are generally larger than females and, in some species, both males and females are similar in size. The Pinnipeds comprise around 33 species enjoying a population of up to or more than 100,000 but there are certain species that are rare to find or considered as vulnerable. Those species include- Saimaa ringed seals, Lacs de Loups Marine harbor seals, Mediterranean monk seals, Hawaiian monk seals, and honestly, it is quite fascinating to learn about Pinnipeds. Read on to learn about these seals and sea lions.

If you enjoy these facts, check out the fur seals and Amazonian manatee too.

Fur, blubber, a layer of fat

What type of animal are Pinnipeds?

The Pinnipeds belong to the families of true seals or the earless seals, the fur seals and sea lion (eared seals), and walrus.

What class of animal do Pinnipeds belong to?

How many Pinnipeds are there in the world?

Where do Pinnipeds live?

Pinnipeds are mostly found in Polar and Sub-polar regions.

What is a Pinniped's habitat?

Pinnipeds are mostly found in aquatic habitats or environments ranging from ice to tropics, coastal to pelagic waters. They sometimes tend to have a migratory lifestyle.

Who do Pinnipeds live with?

Pinnipeds that migrate after the breeding season, usually migrate alone or in small groups whereas other pinnipeds that do not migrate tend to live alone and form groups sometimes to swim to short distances to collect food.

How long do Pinnipeds live?

The lifespan of pinnipeds ranges from 25-30 years on average. The female pinnipeds tend to live longer than the male pinnipeds as the males have a tendency to fight and thus, die before reaching maturity. Sometimes the age varies depending on the species.

While some species of pinnipeds are monogamous, there are others that tend to mate with multiple partners. Polygynous species of pinniped include elephant seals, grey seals, and otariids.  Most of the ice breeding seals are monogamous. Polygynous species, mostly tend to breed on land as the females gather in large numbers. The land on which the pinniped breed tends to be fixed and is, therefore, crowded. The males tend to arrive than the season and wait for the females.

Delayed implantation is a common phenomenon among most species of Pinniped in which the development of the embryo is suspended for weeks or months before it gets implanted in the uterus. This process takes place so as to delay the birth until the conditions are favorable. Births take place in the summer and spring months. Single offspring is the rule and twins are very rare. Walruses are one species that have five to six year-long birth intervals while others tend to be fertile shortly after birth.

While the conservation status of Pinniped is Not Extinct which includes several species like a sea lion, walruses, harbor seals, the status for elephant seals is Least Concern. There are certain species that have been reported as endangered and one of which is the Meditteranean monk seal, which is the rarest to find.

Pinnipeds are shaped like torpedoes, they have wider torsos but narrower hindquarters. Sometimes the body is also called spindle-shaped. These animals have four webbed flippers to help them move their bodies. Walruses are generally larger than the others seals and sea lions. Usually, sea lions are dark in color as camouflage is not important to them.

These large animals are fun to watch when they try to move or come out of the water and some also consider them cute when they swim as they tend to exhibit certain acrobatic abilities.

Most of the communication takes place with body contact, while there have also been examples of mothers guiding their pups towards the water which involves little or no use of displays, only taking place through physical contact, reactions, and movements. The clicks, creaks, bleats, growls, barks, buzzes, grunts, growls are also associated as a way of their communication.

How big are Pinnipeds?

How fast can Pinnipeds run?

Seals are clumsy when they walk on land but they are quite like acrobats in water and can swim really fast. It has been recorded that South American sea lions can reach a maximum running speed of 15 mph.

How much do Pinnipeds weigh?

There is no specific name for the male and female of the species.

What would you call a baby Pinniped?

A baby Pinniped is called a pup.

Pinnipeds eat fish, crabs, lobsters, squids, octopuses, shellfish. They filter these animals from water and use their complex cheek teeth. Some Pinnipeds also eat penguins and other Pinnipeds.

Usually, Pinnipeds, or seals and sea lions, are considered intelligent mammals and there have been instances where they have socially bonded with wildlife experts and caretakers but because they are wild animals and tend to show aggressive behavior, humans are advised to keep a safe distance.

It is rare to find Pinnipeds as pets as they are wild animals and tend to be aggressive which could prove to be unsafe.

Pinnipeds are a group of marine mammals that can be found on almost every continent while most species are found in cold water environments.

While most species have similar features there exist certain differences too. While most of the species have hairy bodies, walruses are hairless species.

An interesting fact about elephant seals is that they can hold their breath for up to two hours and dive up to 6500 ft looking for food. This makes them a unique set of marine mammals. The Male Southern elephant seal which weighs almost 8200 lb (3700 kg) is not only the largest Pinniped but the largest member of Carnivora.

How long do Pinnipeds care for their young?

Usually, nursing pups remain with their mothers for four to six weeks and then are left to survive on their own. There are certain variations as some species keep their pups with them ranging from four days to three years.

Pinnipeds vs. other mammals

Pinniped species have reduced air-borne hearing as compared to other terrestrial mammals.

Pinnipeds have a more flexible trachea than other terrestrial mammals that allows air to compress during a dive.

Pinnipeds spend most of their life swimming in water but come on land to breed. They give birth unlike other marine mammals like cetaceans and sirenians that spend their whole life in water.

Unlike cetaceans which include whales and dolphins, most of the Pinniped species have their nose on their faces and each of the nostrils closes when they are in the water.

Here at Kidadl, we have carefully created lots of interesting family-friendly animal facts for everyone to discover! Learn more about some other mammals including leopard seal, or walrus.

You can even occupy yourself at home by drawing one on our Pinniped coloring pages.