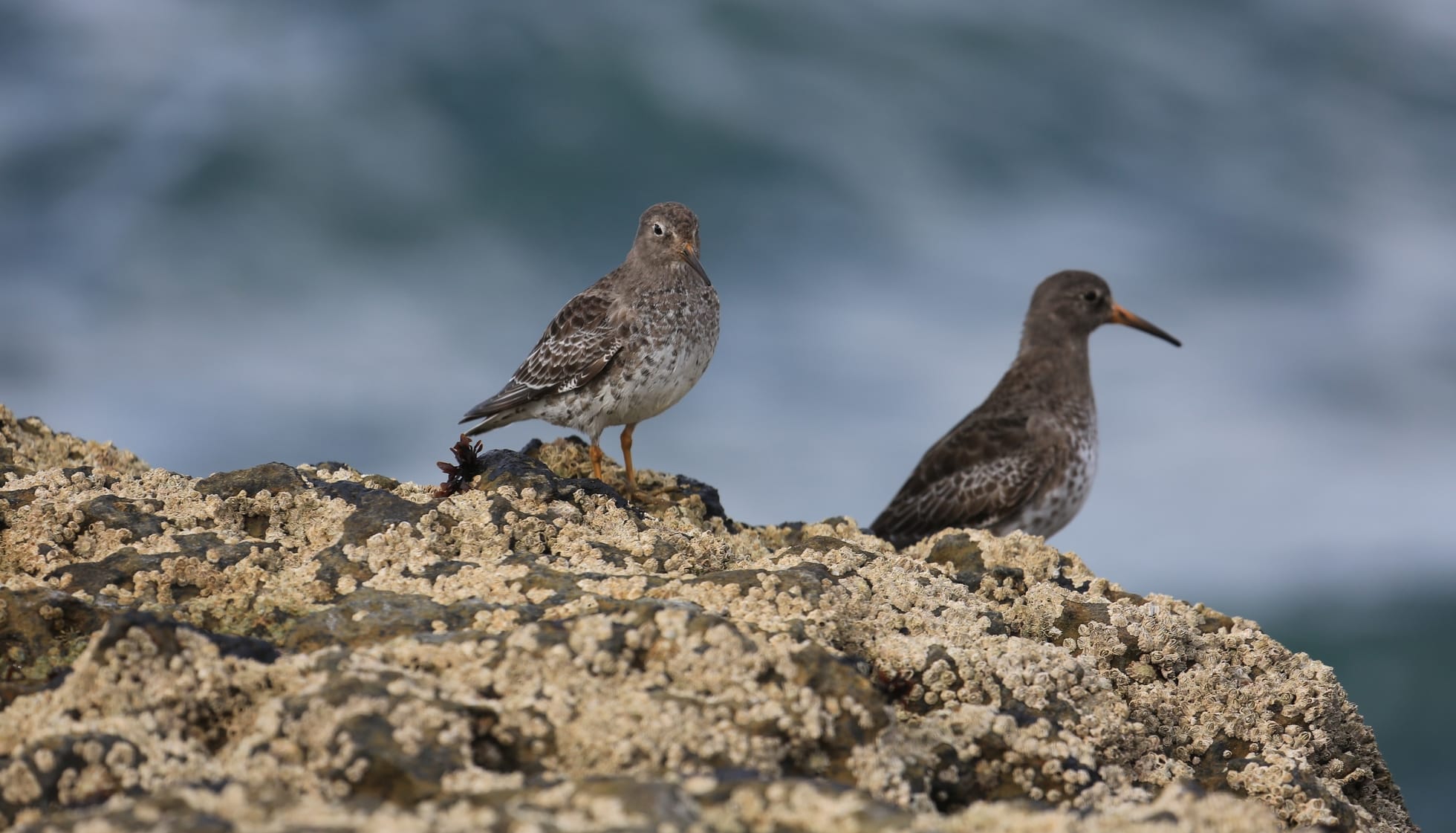 Are you in search of learning more about shorebirds that inhabit the North Atlantic shores? If yes, then you should know about the purple sandpiper (Calidris maritima). This bird is mainly found in its habitat of North America where it lives in some of the farthest north regions, which can be extremely cold. These birds can be easily spotted foraging in the tundra region in search of prey. Apart from northern America, these bird species are also seen in northern Europe and even in Russia. The favorite habitat of this bird species includes the shores and coast of islands and other marine areas. Migration is common in this species, and the birds mate and increase their family during June and July. These birds are never seen in the extreme south, even during migration. Even though it has the name of a purple sandpiper, its feathers aren't purple but has a more dark gray look. However, non-breeding birds may often have a purple sheen on their plumage. As the bird lives close to marine habitats and closer to the coast, their diet mainly consists of mollusks.

Are you interested in knowing more purple sandpiper facts? Keep reading to learn a range of facts. Also, check out our articles on horseshoe crab and Cape May warbler.

What type of animal is a purple sandpiper?

The purple sandpiper (Calidris maritima) is a type of shorebird.

What class of animal does a purple sandpiper belong to?

The purple sandpiper belongs to the class Aves and to the genus Calidris.

How many purple sandpipers are there in the world?

No conclusive studies have been done to find the exact population of the purple sandpiper species.

Where does a purple sandpiper live?

Purple sandpiper birds are mainly found in different parts of North America and other countries like Greenland, Iceland, Norway, Russia, Denmark, Germany, Netherlands, and Belgium. These birds also travel to areas with a warmer temperature to breed, especially to in places in Europe. They are also known for being the northernmost wintering shorebirds. In the United States, the birds only go as south as South Carolina.

What is a purple sandpiper's habitat?

Purple sandpipers hunt in the tundra region. In the High Arctic, these birds are seen at sea level especially during the breeding season. In the tundra region, these birds can be found feeding in the rocky intertidal zones. During harsh winters, the birds migrate to areas with a rocky shoreline and areas that have sandy beaches. They can live in areas that have a maximum elevation of 3280 ft (1000 m).

Who do purple sandpipers live with?

Purple sandpipers migrate in groups during its early wintering. However, during the breeding season, this bird is mostly known to nest in pairs and it tends to mark territory. A male bird has to spend time capturing the territory, and its social hierarchy in the group determines the amount of territory it gets. During the times of high tide and at night, these birds can be seen roosting together in large groups. The birds also call other bird species to tag along during migration.

How long does a purple sandpiper live?

The average lifespan of purple sandpipers is anywhere between five to 20 years. Some birds have a long breeding age that may last until eight to 12 years. One of the things that this species has to face is the predation of its nest. These birds have a high mortality rate in the first year because of their susceptibility to predators like Arctic foxes, jaegers, Eurasian sparrowhawks, and gyrfalcons.

The incubation period of eggs before hatching lasts between 21 to 22 days. Young birds can move and peck around right after hatching. The young chicks of this species also accompany the father to forage for food. A purple sandpiper grows up fairly quickly, and the chicks fledge from the nest anywhere around 19 to 33 days. It takes about one year for a purple sandpiper bird to become sexually matured.

The conservation status of the purple sandpiper is currently Least Concern as noted by the International Union for Conservation of Nature Red List. The species is also protected for conservation under the US Migratory Bird Act. Climate change may lead to habitat loss of this bird as they could lose their natural tundra habitat in the Arctic.

The purple sandpiper isn't the most colorful bird that you will come across. It has primarily dark gray feathers on its back. Its chest area and its underside are covered with a white plumage streaked or splotches with brown feathers. The bird also has white feathers under its wings which is mostly seen during flight. During the non-breeding season, the feathers may take a darker color, and a purple sheen is added to the purple sandpiper feather. There is a thin white wing strip that is mostly seen during flight.

Purple sandpipers are quite cute even though these birds have a plain plumage without much color. During winter, the birds can appear fluffier and cuter.

The purple sandpiper is known for its vocalization and diverse calls. Its main song is the single or the double twit that sounds like 'twit-twit'. Males also use its call to search for a potential mate during the breeding season. Male birds also produce a song known as the 'rodent run call' which is part of the purple sandpiper distraction display to lead the predators. Males and females also communicate through a low and rapid chattering call while being in the nest before the eggs have hatched. These North American birds also partake in visual displays by lifting their wings to expose the white plumage present on their underside.

How big is a purple sandpiper?

How fast can a purple sandpiper fly?

How much does a purple sandpiper weigh?

The average weight of a purple sandpiper bird is around 2.1-2.6 oz (60-75 g). In the winter, these birds can gain a little more weight to keep themselves warm.

What would you call a baby purple sandpiper?

A baby purple sandpiper is called a 'chick'.

Purple sandpipers are often called molluscivores because of their primary food source being mollusks. As a northern shore bird, one can most likely find a purple sandpiper hunting or foraging for mollusks. However, other food sources in its diet include algae and insects. Common food items seen in its diet include dog-whelps, mussels, winkles, and sea snails. When the shoreline is covered during high tides, the bird may go after food items like insect larvae, adult kelp flies, crustaceans, spiders, seeds, leaves, and berries. These birds may even prefer to forage before the tide covers the coast. An adult female is known to prey and eat larger mollusks because of its long bill. Chicks eat similar things to its parents.

Males can be territorial, especially during the breeding season. Apart from patrolling its area, males are also seen running next to each other with hoisted beaks. The act is aptly known as fencing. This display can soon be followed by fighting between males. Also, males dominate over females.

You cannot keep these northern birds as your pets as it is a wild animal. Also, because these birds belong to the Arctic or tundra region, you wouldn't be able to give them a habitat that is suitable for them.

As there is seldom any human settlements overlapping with the bird's range, it seldom has any interaction with humans.

A group of sandpipers is known as a 'bind' as well as a 'contradiction'.

What is unique about the purple sandpiper?

The purple sandpiper is known for being the northernmost shorebird. These birds are well adapted to the cold and the perpetual winter of the Arctic. These birds also produce alarm calls while wintering for other shore birds like dunlins and Arctic terns.

It has been observed that male purple sandpipers take up the role of parental care in this North American bird species. As a male bird is already quite territorial, the male purple sandpiper breeding and parenting role becomes much more important. Females also have a tendency to migrate after the eggs have hatched. Apart from protecting the nest, males also forage along with their chicks and take care of them for up to 22 days.

Here at Kidadl, we have carefully created lots of interesting family-friendly animal facts for everyone to discover! Learn more about some other birds including little egret, or snowy egret.

You can even occupy yourself at home by drawing one on our purple sandpiper coloring pages.