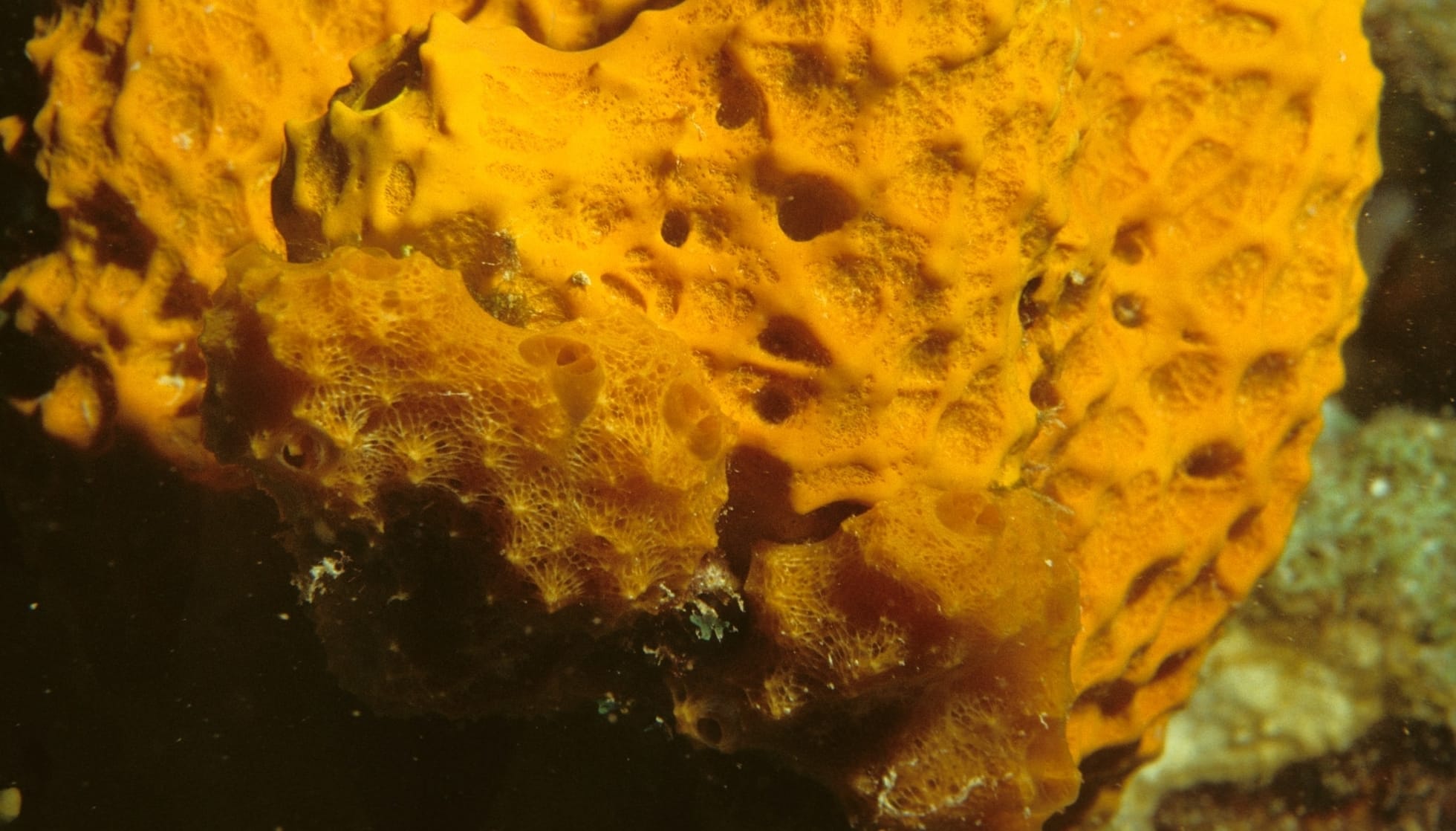 Have you ever looked at Spongebob and wondered how he got inside the ocean? Well, sea sponges are a common phenomenon seen all over the marine floor. Sea sponges are known for their spectacular colors, and interestingly they are living and breathing creatures like any other animal. The word sponge is derived from a similar ancient Greek word. The life of a sea sponge is quite mysterious, and fossils state that they have existed on the earth for more than 600 million years. So, these ocean creatures may also have the ability to outlive us. One of the main tasks of marine sponges is to filter the water and to keep it healthy. Every day some sea sponges end up filtering water up to 100,000 times their size. Hence, conserving these sponges is essential to keeping our oceans healthy. However, ocean pollution and climate change have caused harm to several species, and they are at risk of going extinct. Keep on reading to know more interesting sea sponge facts to acquaint yourself with one of the strangest and most helpful marine dwelling species.

Moreover, check out the articles about jellyfish and oysters to get information about more marine animals.

What type of animal is a sea sponge?

A sea sponge is an ancient multicellular animal that lives in the depths of the ocean. The classification of a sea sponge phylum is Porifera. Once they were thought to be plants, but now they are known to be animals.

What class of animal does a sea sponge belong to?

The sea sponges belong to the phylum Porifera, and they are currently divided into four different classes, mainly based on their skeletal structure. The four classes are Calcarea, Hexactinellida, Demospongiae, and Homoscleromorpha. The undermined or unclassified sea sponges are placed in the Stromatoporoidea class. As they are a common umbrella for thousands of species, no specific sea sponge scientific name can be determined.

How many sea sponges are there in the world?

It is a tough task to go about analyzing the number of sea sponges left in the world as they are one of the most mysterious marine species known to men. Thousands and thousands of species are yet to be discovered. Currently, the world has anywhere between 5,000-10,000 different species of sponges living in it. Though most of them belong to the ocean, some are also found in freshwater sources.

Where does a sea sponge live?

Sea sponges live in the depths of the ocean and their location can depend according to their species. For instance, the glass sponges live at the depth of 1476.4-2952.8 ft (450-900 m). Some sea sponges may even belong shallow water reefs found in coastal areas.

What is a sea sponge's habitat?

The sea sponges can be found in diverse habitats. Apart from the tropical seas, some have even been found in the polar oceans. As most sponges are dependent on filtering the seawater, they prefer to live in sites of clear water. Most of the sponges bind themselves to something hard like a rock, but some even have root-like cells to attach themselves to the ground. Glass sponges are the ones that are found in polar waters, while most other sea sponges prefer to live in tropical waters because of the abundance of food. Some species of the Demosponges live in freshwater.

Who do sea sponges live with?

Sea sponges lack the ability to move, so most of them stay still the same place, forming reefs. A reef is often formed of several species of sea sponges, or it may even include coral or other formations. A sea sponge animal has to live their lives amongst all other marine animals that live in the same area. Some sea sponges are also known for getting involved in the process of photosynthesizing endosymbionts, where they produce three times more oxygen than they take in. Hence, the oxygen that they produce benefits the organisms living beside them. Some shrimps also live in loggerhead sponges giving them protection against other predators.

How long does a sea sponge live?

Sea sponges can live for a long time. The average lifespan of a sea sponge is somewhere around 200 years. However, as sponges have the power to regenerate their body parts, some scientists feel that they can even survive for thousands of years. Sea sponge lifespan of the class Demosponge has been known for living on an average of 500-1000 years.

Sea sponges can reproduce in asexual or sexual ways. In an asexual way, the sponge can reproduce in three different ways, fragmentation, budding, or by producing gemmules. Most sponges that reproduce sexually are hermaphroditic (have characteristics of both sexes) in nature. So, they inseminate their own eggs mostly inside their own body. Larvae come out when they hatch, and they are carried away by water currents to a place of their final settlement.

Even though there are about 10,000 sponge species present in this world, the organisms are yet to be studied widely. The International Union for Conservation of Nature (IUCN) states that they are currently looking into the different Mediterranean sponge species.

It is very hard to describe the appearance of a sea sponge as they are found in several different forms. They are sessile or stationary species that live in a permanent place by forming reefs. Even though sea sponges may look simple, their anatomy is quite complex because these multicellular animals lack a nervous system. Sponges have a non-living jelly-like mass squished between their cells. Most of them have skeletons formed of calcium carbonate, spicules, and other substances, and scientists place them in different classes based on their skeletal structure.

Some of the most common types of sea sponge that you can see are the tube sponge, the orange sea sponge, and the yellow sea sponge. However, there are thousands and thousands of other sea sponge species that may look entirely different. Usually, the sea sponge takes in water from its bottom as the currents flow, and it travels through its pores. Tube-like sponges are quite common. However, some sponges also have a pleated look which is known as the syconoid structure. The shape and form of a sponge may often depend on its habitat. Caribbean reefs contain some of the more striking sponge species, including the orange elephant ear sponge, the red boring sponge, and the white cryptic sponge. Sponges living in the deep waters have a more neutral color, while those living in shallow waters are often more colorful.

Even though the sea sponge looks attractive, they will seldom be described as cute.

Not much is known about the communication system of sponges as they lack a fully developed nervous system. That is also the reason for the sea sponges having the inability to feel pain.

How big is a sea sponge?

How fast can a sea sponge move?

Sea sponges do not have the ability to move.

How much does a sea sponge weigh?

Some sources say that a sea sponge can have a weight of up to 20 lb (9.1 kg), but it can definitely vary according to the size of the sponge.

Most sponges are hermaphroditic in nature so there are no distinct names for sponges.

What would you call a baby sea sponge?

The baby sponges that are created due to sexual reproduction are known as larvae.

Most sponges are detritivores, so the sea sponges feed on detritus that they collect from the ocean water. However, there are some carnivorous sea sponges that eat the crustaceans and sea insects that may roam around them. The ping-pong tree sponges are an example of carnivorous sponges.

Yes, many of the sea sponges are toxic in nature, so they aren't really eaten by other animals. Sponges may spread spicules around their area of habitat to deter predators from attacking them. Other than spreading spicules, sponges may also produce toxins to prevent other organisms from making them, hosts. The Caribbean fire sponge is known for causing skin irritations in humans. However, glass sponges are free from toxins as they live in deep-sea waters.

No, the sea sponges aren't meant to be pets. They are simple yet mysterious organisms that live in the sea. They will not be able to survive in a human household as it is quite hard to mimic their habitat.

Glass sponges can stick together to form reefs that measure up to 65 ft (19.8 m) high.

Some fish and turtles dare to feed on sea sponges.

Before the advent of plastic sponges, people used to use natural sponges for cleaning utensils or even as a loofah. They have again come into fashion as a part of the organic movement.

How much water do sea sponges filter?

Some sea sponges have the ability to filter 100,000 times more water than their size daily. The sea sponges are efficient in extracting bacteria and other pollutants from the water to keep it safe.

What are the functions of a sea sponge's different pores?

Here at Kidadl, we have carefully created lots of interesting family-friendly animal facts for everyone to discover! Learn more about some other arthropods including sea slugs or sand dollars.

You can even occupy yourself at home by drawing one of our coral reef coloring pages.