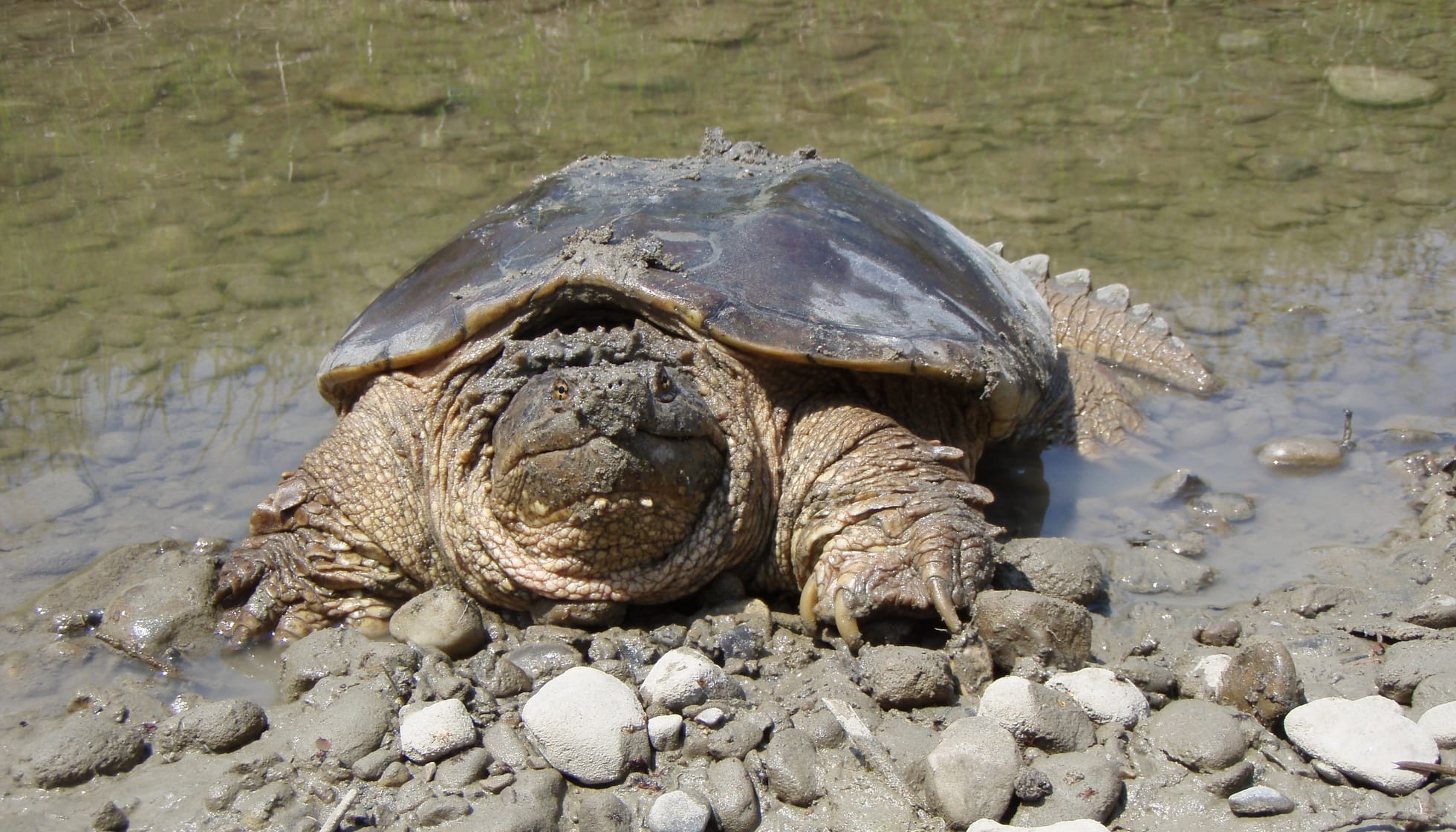 The common snapping turtle (Chelydra serpentina) gets its name from the fact that they have a smaller bottom shell which does not let the whole huge body of these turtles hide inside their shell, and so they snap when they sense danger or have to protect themselves. Let’s have a look at some of the interesting facts and learn how to identify common snapping turtles.

What type of animal is a snapping turtle?

Common snapping turtle (Chelydra serpentina) is a kind or species of turtle that belongs to the Chelydridae and is known for eating varied things, including plants, birds, and many more making them omnivorous reptiles.

What class of animal does a snapping turtle belong to?

Common snapping turtles are one of the most common and well-known members of the class of reptiles (that are cold blooded reptiles) and have special skin type of scales.

How many snapping turtles are there in the world?

Common snapping turtles are known to have haunted the areas of North America since millions of years ago. It is practically impossible to identify the total number of snapping turtles found in the world. But the only thing that can be said is that common snapping turtles have been declared as having the least concern and are nowhere near the road to being extinct. They reproduce really fast and have great numbers, keeping their population intact.

Where does a snapping turtle live?

Snapping turtles habitat includes wetlands including marsh and swamp lands and also found in water bodies that are temperate and have fresh water. They are also found in rivers, ponds, lakes, and streams that strictly have fresh water. The dark brown upper shell offers them considerable protection against predators. Though, some of these animals have their habitat in brackish water as well.

What is a snapping turtle's habitat?

A snapping turtle is usually found in areas of United States, South America, and Central America stretching east from S. Alberta to North in Nova Scotia, extending south to the Gulf of Mexico into Central Texas. They prefer both fresh water and brackish water muddy bottoms that help them hide easily.

Who do snapping turtles live with?

Snapping turtles are among the nonsocial creatures that are solitary and prefer not to associate or live with other turtles in the wild. Even though many turtles would be found living in a particular area, they prefer living alone. Their social interactions are limited to displaying aggression among them.

How long does a snapping turtle live?

Snapping turtles are most threatened by poaching and hunting and are usually killed by predators or cars that are seen near lakes or ponds. A snapping turtle has a lifespan of around 30 years in the wild, as when they reach a certain size, they become more prone to being preyed on by some predators. In contrast, their lifespan can extend to almost 47 years when held in captivity.

Snapping turtles start the mating process once a female turtle has fully matured. A female turtle lays around 30-35 eggs and hides them under sand. The eggs hatch after a period ranging between 70-90 days. A snapping turtle baby is quite an adorable sight.

Snapping turtles are nowhere near being extinct. They are completely under the category of Least Concern as declared by IUCN. They reproduce really fast and have a longer lifespan which keeps their population almost intact. Still efforts for preservation of turtle populations in freshwater bodies are being organized in the United States.

How to identify turtles? The giant snapping turtle is a really huge species. They have a shell length around 8-18 in and also have a long tail that is as long as the shell. They are usually dark brown colored in appearance. Males have longer tails than females. They have characteristic tubercles on their neck and legs that can be distinguished and have very small plastrons that leave most of the extremities exposed. Their upper shell with three rows of carapace keels ranges in color from tan to black, and their head is darker while their neck, tails, and legs have a yellowish color.

They are cute and docile animals until they are in water and will not harm you until they feel vulnerable or provoked. They can be really vicious or dangerous when they are pulled out of water or on land. Their shells with three rows of carapace keels give them an exotic appearance.

Snapping turtles are not very social creatures that communicate through their leg movements while facing each other. They also have a strong sense of smell, vision, or touch that helps them find and identify their prey while on land, and they can also sense vibrations in case of water.

How big is a snapping turtle?

Snapping turtles have bilaterally symmetrical bodies that weigh around 9-35 lb whereas they have a length of around 8-18 in. But there are extreme cases of these snapping turtles, and they are known to grow really big to be almost half the size of a full-grown human.

How fast can a snapping turtle swim?

How much does a snapping turtle weigh?

Snapping turtles have three different species, among which the alligator snapping turtle is known for its huge size and weight. They can be as heavy as around 35 lb.

What would you call a baby snapping turtle?

They are called baby snapping turtles.

Snapping turtles are really vicious creatures and will prey on anything and everything that can fit their jaw. They are omnivorous creatures that feed on fishes, small mammals, birds, amphibians, invertebrates, with their powerful jaws. Their favorite diet is birds, and they are also known to prey on other turtles, encouraged by the portrayal of their territorial supremacy.

Snapping turtles are not usually dangerous, but it is suggested for humans to stay away from them. They are rather docile until they are provoked or feel vulnerable. They are really nice when kept in water but can show vicious behavior once they are pulled out of water.

Snapping turtles in North America are really anti-social creatures that usually stay underwater for most of their lives. They also keep their safe distance from humans and are known to attack humans if they try to touch them.

Take a look at some of the most interesting facts about snapping turtles that will help you know a lot more about these species of turtles.

The common snapping turtle has been regarded as the state official reptile of New York since 2006.

An alligator snapping turtle is one of the species of snapping turtles that are really huge and are given the title of biggest freshwater turtle around the world, largest being as heavy as 249 pounds.

How to pick up a snapping turtle?

As we have already seen, snapping turtles can bite you, and that is something you would not want to experience. So one of the main precautions to take while picking up a snapping turtle is that you must not place your hand anywhere near their mouth to give them a chance to bite you. Another thing is never to hold a snapping turtle by its tail as it can permanently damage or dislocate its vertebrae. The safest and nicest way to pick or hold a snapping turtle is by sliding both hands on the hind end of the shell and letting the tail free, and clasping its carapace with both of your thumbs.

How long does it take for a snapping turtle egg to hatch?

The eggs of snapping turtles are laid in nests that are buried under the ground. The hatching of turtle eggs depends on the temperature and environment conditions. They usually take around 80-90 days for the eggs to hatch (roughly three to six months) based on the weather.

Here at Kidadl, we have carefully created lots of interesting family-friendly animal facts for everyone to discover! You can even occupy yourself at home by drawing one on our snapping turtle coloring pages.