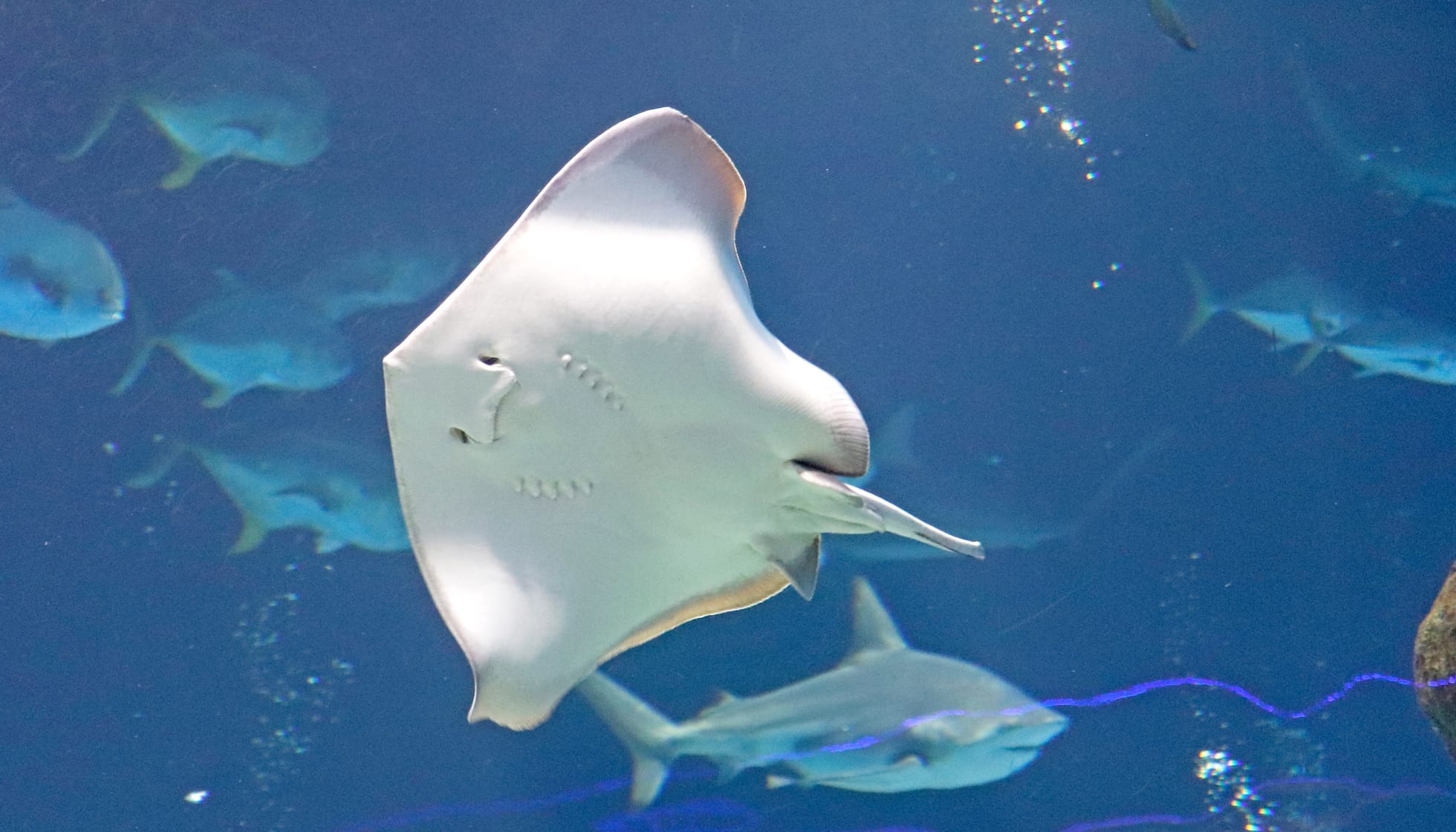 If you are a lover of the marine world, then we have a treat for you! We present to you a very unique species, the southern stingrays. They are benthic creatures and their habitats consist of shallow coastal waters present in the Atlantic Ocean and the Gulf of Mexico. These rays are different from normal fishes based on their size and structure. They have a disc-shaped body with pectoral fins on the side and gills on the underside. Its tail is extremely interesting and can be almost twice as long as the body. They are exceptional hunters and can detect their prey and food with their supreme sense of smell and touch. These rays are also voracious feeders and live on a food diet of worms, crustaceans, and small fish. They are viviparous i.e. they directly give birth to young ones. Owing to the destruction of their habitats by various activities by humans, their conservation status is now Near Threatened. If proper care for their protection is not undertaken, then this species can very easily slide into the grasp of extinction.

If you find our content interesting then do also check out our monkfish and goblin shark facts.

What type of animal is a southern stingray?

What class of animal does a southern stingray belong to?

Though the southern stingray (Dasyatis americana) is a fish, its skeleton is made up of cartilages, and thus, it falls under the class of Chondrichthyes of the Animalia Kingdom.

How many southern stingrays are there in the world?

Due to being data deficient, the exact population of the southern stingrays cannot be determined. However, we can make an assumption by checking out their Conservation status and population trend. According to the International Union for Conservation of Nature or the IUCN Red List, these species have been listed under Near Threatened category and their population is steadily on the decline.

Where does a southern stingray live?

The southern stingrays are a type of whiptail stingrays that are found in abundance in the western Atlantic Ocean. These places are Brazil, the Bahamas, the British West Indies, the Cayman Islands, the Caribbean Sea, the Gulf of Mexico, and also southern parts of Florida. They are found majorly in tropical and subtropical waters of the ocean system.

What is a southern stingray's habitat?

Who do southern stingrays live with?

Similar to other species of stingrays, the southern stingrays are solitary. They are known to venture out into the ocean on their own. However, these creatures are known to form groups during the breeding season.

How long does a southern stingray live?

Not much information is known about the mating habit of the southern stingray (Dasyatis americana). It is known to attain sexual maturity at different times, based on its marine environmental habitats. Females attain maturity at five or six years, while males are known to attain maturity in three to four years. These rays have a clutch size that ranges from 2-10 pups and the number of offsprings per litter is directly related to the size of the mother. Out in the wild environmental habitats, these creatures breed once a year. They have a significantly higher gestation period which ranges from 125-226 days. Two kinds of nurseries are used, the primary - where the female gives birth and the secondary - where the young ones grow. Unlike other fishes, they are viviparous i.e. they give birth to the young ones.

According to the International Union for Conservation of Nature or the IUCN Red List, the southern stingrays are listed as being Near Threatened. Loss of coral reef beds and other factors like climate change have led to a steady decline in the population of this species. If proper conservatory steps are not undertaken like preserving coral reef beds, then the southern stingray will eventually edge towards extinction in the ocean.

Southern stingrays are a type of cartilaginous fish that are unique in shape and size and they are interesting creatures to study in marine biology. Males and females have an elongated body that is of the shape of a disc. The base of the body collectively consists of the pectoral fins with the head. The disc is diamond-shaped in nature and consists of the head with the pectoral fins. As the females are bigger in size in comparison with the males, the diamond-shaped disc is also larger for the females. These fishes have gills located under the body, which help in respiration. They have a tail that is twice the length of their entire body and is known to contain poisonous or venomous barb, which helps in self-defense. The body color of the males and the females could be dark gray, brown, and green. Their eyes are situated on the top of the head just above the snout. The snout is essential for their keen senses of smell, helping these creatures to detect their prey including small fish species.

The cuteness of this animal is subjective and its appeal differs from person to person. There is a major section of people who find these marine creatures and their fins to be amazingly majestic. However, the other section believes that the southern stingrays are gruesome and hideous creatures.

Southern stingrays are animals that are known to communicate in a wide number of ways. Researches have shown that males are known to approach female stingrays after the females give birth to young ones. Thus, it can be assumed that these animals are known to secrete pheromones that are sexual in nature. Apart from this, these animals have an extremely keen sense of smell by which they are able to detect hidden prey and predators. Like other rays that belong to the sub-class of Elasmobranchii, these animals have Ampullae of Lorenzini located around their head. The Ampullae of Lorenzini are electroreceptors and help the southern stingrays in sensing electrical fields around them, and thus, can detect their prey. Their sense of hearing, too, is high and is known to catch vibrations from their lateral lines. Lastly comes vision - these animals have large eyes that help in identifying their food.

How big is a southern stingray?

How much does a southern stingray weigh?

The average weight of a southern stingray is roughly around the range of 165 lb (75 kg). Since average-size fishes generally weigh less, we can say that southern stingrays are large-sized fishes.

What would you call a baby southern stingray?

Southern stingrays consume a wide number of animals. Though they hunt during the day, the majority of their feeding activity is observed at night. These animals continue feeding and can also be classified as opportunistic feeders. The majority of the diet of these stingrays consists of small fishes, worms, and a wide range of crustaceans which can be found in a sandy ocean bottom. They are known to hunt and feed on their prey relying on their acute sense of smell and touch.

Yes, the southern stingray of the Dasyatidae family is a poisonous animal. These animals have a serrated tail almost twice their body length, which has a poisonous spine or barb at the end of it. This spine is used by the southern stingray only for self-defense when approached or cornered by a predator. However, this spine is not fatal for humans but can cause extreme pain if any human accidentally steps on it.

No. Keeping this marine animal as a pet will be a very bad choice for you, as they are known to survive only under conditions that can be extremely hard to re-create at home or in a tank. Moreover, these are wild animals and they should be left out in the wild.

The southern stingrays are docile animals and there are numerous places where visitors can hand-feed these stingrays.

Why is the southern stingray endangered?

The International Union for Conservation of Nature Red List has listed the southern stingrays as animals that fall under the Near Threatened category. Moreover, the population of this species has also constantly been on the decline for quite some time now, due to humans and their activities. Destruction of their natural habitat, because of climate change and pollution, has led to the death of these animals. Strong measures are being taken to restore their natural habitat, along with other measures to clean up oceans and their shores will surely lead to a proper survival and growth of the southern stingrays.

What does a southern stingray do to survive?

The southern stingrays have quite a large number of predators that they have to constantly look out for in the oceans. These include sharks, sea lions, and other different species of large marine creatures. As a result, the southern stingray has a unique way of self-defense. These animals have a tail that is almost twice their body length and at the base of this tail, there is a poisonous or venomous serrated spine which can be fatal to other aquatic animals and painful for humans.

Here at Kidadl, we have carefully created lots of interesting family-friendly animal facts for everyone to discover! Learn more about some other fishes from our tarpon facts and Amazon river dolphin facts pages.

You can even occupy yourself at home by coloring in one of our free printable southern stingray coloring pages.