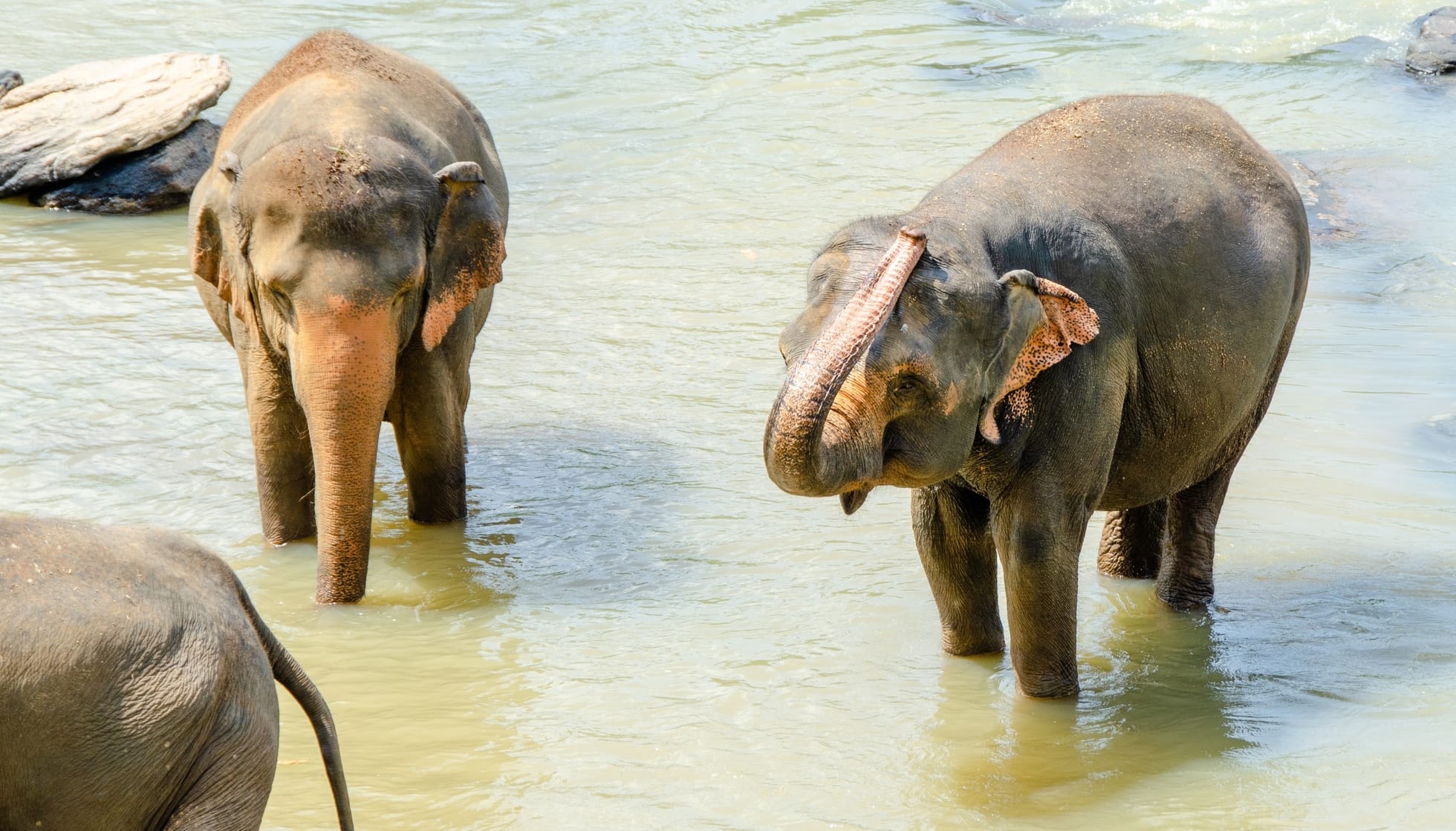 Dwarf mongooses are widely found on the African continent and are the smallest known species in the order of Carnivora. They can be found in Ethiopia, Somalia, the eastern parts of South Africa, and Namibia. For the dwarf mongoose, Helogale parvula is the scientific name. Their heads are pointed with shorter limbs and long claws. They have tiny ears, and their tails can look as long as their bodies. They have a soft fur coat that is either speckled brown or yellowish red. They are predominantly insectivorous, but they may also feed on rodents, snakes, and birds.

They are a very collective and endemic group of species that live in groups that may vary in size from 12-30. The group members are close-knit and fend for one another. They can cover a range of 75 ac (30.4 ha) of territory. The termite mound acts as an abode for these animal species in marked territories. These termite mounds sheltering the mongooses can be a shelter from predators or for the storage of food. Read on to learn about the Helogale parvula, the dwarf mongoose.

If you are looking for more exciting content from us, then check out our articles on the musk ox and fennec fox.

What type of animal is a dwarf mongoose?

The common dwarf mongoose, Helogale parvula, belongs to the mongoose family and is the most diminutive known creature in the order Carnivora of Africa. They are most active during the daytime and hence are classified as diurnal. Their idle time at night is spent in termite mounds. Dwarf mongooses can accommodate themselves in hollow tree logs or even piles of stones in the absence of termite mounds.

What class of animal does a dwarf mongoose belong to?

The common dwarf mongoose is in the class Mammalia. These mongooses have females of the species giving birth to young mongooses. The young mongooses are nursed for 45 days by the females. Sometimes, nursing is taken over by the subordinate females.

How many dwarf mongooses are there in the world?

There has not been any detailed study on the common dwarf mongoose population. However, upon studying the wide distribution of these small species of animals in their habitat range, it can be concluded that their population is well dispensed and has a healthy count.

Where does a dwarf mongoose live?

These dwarf mongooses thrive well in the tropical savannah, woodlands, bushland, and open forests. They are found mainly on the continent of Africa.

The dwarf mongoose prefers any location range with many termite mounds and has less of a preference for deserts. The termite mound becomes group-specific, and these mongooses mark their sites to protect from attacks of other groups.

What is a dwarf mongoose's habitat?

Dwarf mongooses are best suited to the tropical climate zones of Africa. They enjoy ample sun exposure in their habitat range. These small animals work in groups and spend most of their day seeking food and gathering it to their respective termite mounds in these mongooses' habitats. Territories are overrun by one another, leading to confrontations among groups for food and space.

Who do dwarf mongooses live with?

These highly social species of animals live in groups typically consisting of 12-30 members. The group of common dwarf mongoose species is called by different terms such as a troop, pack, mongaggle, and others. There is a dominant female or the alpha for each group, and these female animals command the group dynamics from mating, rearing, and food gathering to protecting the lot. The reverse-age-based ranking is an exciting phenomenon that affects the dwarf mongoose's behavior. This means that the young pups are more prominent in all groups than their older group members, allowing the young family members to get food without competing with others.

How long does a dwarf mongoose live?

The dominant pair in the group bear the young pups and the gestation period lasts for 49-56 days. The alpha female gives three litters per mating season between October and April. Each litter consists of four to six pups, and the three litters contribute to 80% of the young mongooses. The subordinate females may mate and provide for the young ones.

The dwarf mongoose life cycle facts indicate that the young ones attain reproductive age at around one year but delay their mating. The dominant males are mating with the alpha only after three years. After three years of age, these male animals may start emigrating groups based on need. The females compete for the dominant position and remain in the groups.

The IUCN Red List places these small mongooses in the Least Concern category as it is not an endangered species. The longer lifespan and their adaptability in their natural habitat range defend them from external threats of extinction. Interestingly, the dwarf mongoose diet can affect insects' populations in their habitat range, as they are primarily insectivorous.

They have a sleek slender body and long furry tails that are as big as their bodies. They are highly social and terrestrial. The dwarf mongoose color ranges from speckled brown to yellowish red. The claws on the front feet are curved for gathering food efficiently. The alpha female is the prominent member of the pack.

The petite body and their dynamic nature make them look adorable. They are cute when walking, running, and even climbing which this mongoose species does quickly. They are highly resourceful and help one another in the group.

These highly vocal animals communicate among their group by ways of repeated twitters, trills or whistling, and scuttling around. Their signs are different for food gathering or for indicating imminent danger.

How big is a dwarf mongoose?

How fast can a dwarf mongoose run?

These animals are known to run at a speed of 20 mph (32.2 kph). They are pretty swift for their small size.

How much does a dwarf mongoose weigh?

There is no specific term for a male or a female mongoose. They do, however, have colloquial names in Africa like 'Uchakide' in Zulu, 'Dwergmuishond' in Afrikaans, and 'Kgano' in Tswana, to name a few.

What would you call a baby dwarf mongoose?

The baby dwarf mongoose is called a pup. The juvenile dwarf mongoose becomes independent in 10 weeks. They become eminent members of the social hierarchy quite early in age.

They are a highly active group of creatures. They are insect eaters, and occasionally, their diet includes spiders, scorpions, eggs, and fruits. Though the average consumption of food per day is unknown, it is clear that they engage in foraging with the hornbills. Their diet requirements are easily met. As their diet is primarily insects, they are an essential member of the food chain to regulate the insect population.

Although these mongoose species are considered harmless to humans, they can bite humans in rare scenarios. They have sharp teeth, and the wounds caused by the sharp incisors and the paired upper and lower molar teeth can be very grave. It causes Streptococcal sepsis. Early treatment and the right antibiotic course are needed to prevent further health deterioration. You can have a safe look at them in the zoo or in their natural habitat.

The dwarf mongoose's characteristics of having a lean and small frame, along with their intelligence, might tempt you to bring one of these animals home. However, a dwarf mongoose pet fantasy should not be encouraged as they are better off in the wilderness. Their physiological adaptations are suited to survive in their respective habitat range.

These species of animals have special receptors in their body that protect them from snake venom.

The dwarf mongoose and hornbill, fun facts suggest they have a mutualistic relationship. Hornbills wake up these mongooses. The hornbills also warn the mongooses of any potential danger in the vicinity.

They have razor-sharp incisors and large carnassial canine teeth that inflict puncture wounds on victims. They inject bacteria into victims with every bite.

Can you have a dwarf mongoose as a pet?

As the import of these animals is a regulated affair, exotic pet enthusiasts are mindful of the legalities of owning one of these animal species. States like Alaska and California ban rare and exotic animals as pets. Simultaneously, some states require you to have special permits to own an alluring pet like the dwarf mongooses.

These mongooses are highly temperamental in nature, and they get difficult in training to adapt to household living or zoo captivity. It is prudent to leave the dwarf mongooses to their natural environment and keep them away from the zoo or households.

The dwarf mongooses are under the Least Concern classification in the IUCN Red List. They are abundantly found on the African continent. Though these animals are eaten by the locals living near their habitat, their population isn't affected too much.

Here at Kidadl, we have carefully created many interesting family-friendly animal facts for everyone to discover! Learn more about some other mammals including the black-footed ferret, or plains zebra.

You can even occupy yourself at home by drawing one on our mongoose coloring pages.