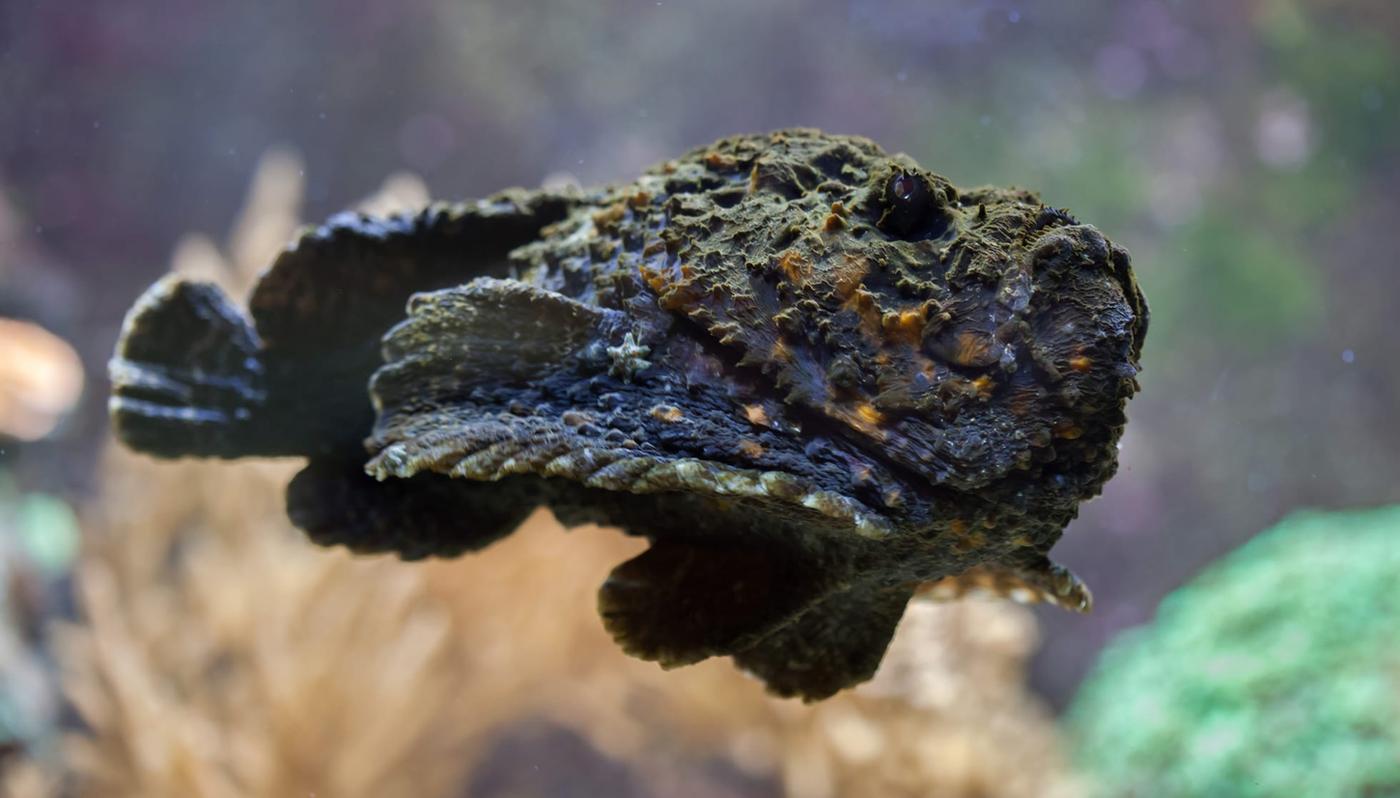 Belonging to the Synanceia genus, stonefish are among the deadliest marine creatures. They are known to be the most venomous fish in the world. These ugly-looking creatures not only have the potential to kill a human being in less than an hour, but their venom stings have the ability to protect the creature from predators such as sharks and rays.

Reef stonefish (Synanceia verrucosa) are also closely related to the estuarine stonefish. Their reproduction procedure almost mirrors each other. There are five species of stonefish extant in the world.

These fish look really ugly. They are mostly brown or gray in color and are covered in red, yellow, and orange colored blotches all over their body. However, their looks actually help to protect them against their predators. They are known to be a master of camouflage for their unique skin color and texture. It also serves their purpose to become almost invisible among their surroundings, coral reefs and stones, and catch prey.

To learn more about this interesting species of fish, keep on reading.

Are you interested to learn more about such mystical animals across the world? Then don't forget to check out the white crappie and the tiger shark.

What type of animal is a stonefish?

Stonefish are the world's most venomous fish. Although native to the northern shallow coastal waters of Australia, these fish can now be found in parts of Florida and the Caribbean. These fish are known for their unique looks and excellent camouflage.

What class of animal does a stonefish belong to?

Stonefish belong to the Actinopterygii class of the animal kingdom. They are known as ray-finned fish. These fish have ray-like dorsal fin spines, which are actually a web of skin supported by a bony structure.

How many stonefish are there in the world?

The exact number of stonefish in the world is not known. However, their abundance has been observed in the Indo-Pacific ocean and coastal surroundings.

Where does a stonefish live?

Stonefish are native to the coastal region of Australia. However, in recent years they have been introduced to parts of Florida and the Caribbean Sea. This venomous fish is among the most widespread species found in the Indo-pacific ocean and the Red Sea.

What is a stonefish habitat?

The most preferred habitat of the stonefish is shallow coastal water. They are known for their excellent camouflage. Along with their dorsal fin spines, these fish look like coral or encrusted stone and can easily hide among the rocky and coral reefs. It also helps them to stay safe and survive their predators.

Who do stonefish live with?

These fish are found both in groups and also living alone.

How long does a stonefish live?

The average lifespan of this venomous fish varies between five and 10 years. Unlike other sea creatures, these fish do not die soon after they are removed from their preferred habitat. Stonefish can survive up to 24 hours by absorbing oxygen through their skin if left in moist surroundings.

As mentioned previously, these fish can be found in the ocean, both in groups and living by themselves. However, it is far more common for a stonefish to live by itself than to live in a group. Exceptions happen during the mating season. Female reef stonefish lay eggs on the seafloor. The layered unfertilized eggs are quite large, which ensures that the newborns are quite well-developed. Once the females lay the eggs, male reef stonefish release their sperm on it. In this way, the eggs are fertilized and young reef stonefish are born.

Belonging to the family Synanceiidae, and order Scorpaeniformes, according to the International Union for Conservation of Nature (IUCN) Red List, the conservation status of the reef stonefish is of Least Concern. These native Australian fish can be found abundantly in parts of Northern Australia, along with the Red Sea, Indian Ocean, Pacific Ocean, and Florida.

The most venomous fish in the world is also an excellent camouflage master, and it becomes possible because of their unique looks. This also helps them to keep themselves safe from predators. Just as the name suggests, the stonefish look like any other encrusted stone or coral lying on the shallow water coastal area of an ocean. They are mostly gray or brown in color, covered in yellow, red, or orange patches all over their body. The 13 spines, also known as the dorsal fin spines, contain venom. The dorsal fin spines make them a part of the ray-finned family. They use their dorsal fin to inject venom into the body of their predator and not their prey. If by mistake a full-grown adult person steps on their venomous spines, the venom stings present in it has the capacity to cause death within less than an hour as a strategy for the fish to survive. The venom creates excruciating pain which leads to heart failure.

Although many may find this species of fish interesting and mystical, calling them cute won't be appropriate at all. Their coral-like bumpy skin, venom in the 13 spines known as dorsal fins, ability to cause the death of humans, and the fact of being the most venomous fish in the world, nothing can determine them as cute.

It is not exactly known how the stonefish communicates.

How big is a stonefish?

Stonefish, which are the most venomous fish in the world, can grow up to 11.8-15.7 in (30-40 cm) in length. They are almost half the size of a freshwater giant pufferfish.

How fast can a stonefish swim?

Although the exact speed at which stonefish swim is not known, it can be said that they belong to the category of slow swimmers. However, they can attack their prey in a minimal time of 0.02 seconds and swim exceptionally well when hunting.

How much does a stonefish weigh?

The male and female fish of the stonefish species do not have any specific names.

What would you call a baby stonefish?

The Australian native, stonefish, prey upon small fish, shrimp, other crustaceans. Despite being the most venomous fish in the world do not use their venom to kill their prey. They wait for hours for prey, which is smaller than they are, to come alose and then they strike at it. They attack their prey at high speed and swallow it up. They use the venom mostly to protect themselves from their predators. Using their dorsal fin they inject the venom into the predator's body. The venom is so powerful that it actually has the potential to keep the predators away, which includes rays and sharks.

Stonefish are among the most dangerous marine creatures. They are venomous and have the capacity to kill full-grown humans. Using their spines they produce a sting. This sting then results in excruciating pain, and eventually heart failure within humans. Surprisingly, these Australian natives do not use their venom to kill their prey, instead, they patiently wait for them and attack at high speed, and swallow them.

Under no circumstances would the deadly stonefish make a good pet.

Despite being one of the most deadly creatures in the marine world, people actually do consume stonefish. However, their venom loses its potential to harm humans, once cooked. Even if it's served uncooked, simply removing the venomous spines makes them safe for consumption.

Can stonefish venom kill you?

Stonefish venom has the ability to kill a full-grown human in less than an hour. Using their spine they can sting you, causing extreme pain, which can slowly lead to death.

The effect of the venom can be neutralized using an anti-venom injection. The anti-venom is created by immunizing horses against the venom. Hot water immersion can also be used as an effective treatment.

Yes, sharks are among their most deadly predators. However, stonefish venom proves to be an effective way to keep sharks away.

Here at Kidadl, we have carefully created lots of interesting family-friendly animal facts for everyone to discover! Learn more about some other fish including plaice and the Pacific cod.

You can even occupy yourself at home by drawing one of our stonefish coloring pages.