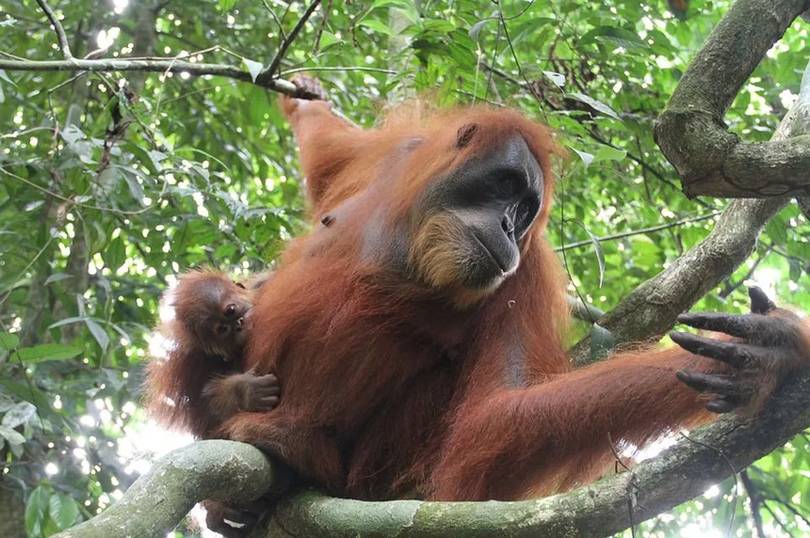 Due to activities like illegal pet trade and felling of trees, the Bornean orangutans are facing the threat of extinction. The loss of orangutan habitat in north Sumatra is responsible for dwindling orangutan populations in the regions. North Sumatra forests are being cleared for palm oil plantations and human habitation. As the orangutan population is rapidly declining, it has now become a threatened species that requires concerted conservation efforts. Let’s have a look at some of the interesting facts about the Sumatran orangutan.

Pockets Of Forests On The Islands And Rainforests

What type of animal is a Sumatran orangutan?

Sumatran orangutan (Pongo abelii) is classified with great apes, gibbons, and humans in the family. The Malay word orangutan means a person of the forest. They are highly intelligent and are close relatives of humans.

What class of animal does a Sumatran orangutan belong to?

How many Sumatran orangutans are there in the world?

The Bornean orangutans are now estimated to be at about 1,04,700 on the basis of geographic range, and the Sumatran orangutans are about 7,500, which makes them a critically endangered species.

Where does a Sumatran orangutan live?

Sumantran orangutans are found only in the rain forests and spend their entire lives in trees by swinging in treetops and building their nests for sleeping.

What is a Sumatran orangutan's habitat?

The Sumatran orangutan’s habitat is that is in rain forests and they live their entire life on trees. The females do not travel on the ground, and adult males do it very rarely.

Who do Sumatran orangutans live with?

As compared to other apes who have very strong social bonds, Sumatran orangutans are considered to be semi-social. They do hang out with the other orangutans, they like to live alone for most of their life. They prefer to remain alone rather than living in a group.

How long does a Sumatran orangutan live?

The reproduction occurs when the male and female Sumatran orangutan have sexual contact with each other. Sexual contact is more often initiated by the female and usually tends to choose the dominant flanged male. The males have the capacity to mate with more than one female.

The conservation status of Sumatran orangutans is critically endangered as their population is decreasing due to illegal pet trade and felling of trees in Sumatran forests for palm oil plantations and human settlements. At present, their total population is estimated at around 7,300 orangutans with around 70 in Bukit Tigapuluh National Park where focused reproduction programs are being conducted. Efforts are on to control the illegal trade and illegal logging that is altering the orangutan population in the long term. Forest fires are also playing a role in the destruction of their habitat.

Sumatran orangutans have bright orange fur, long arms and short legs, with their feet being similar to their hands. They have long reddish hair that covers most of the Sumatran orangutan’s gray skin. Their arms are longer than their legs. the cheek pads in males are slimmer than those in females.

Yes, they are quite cute as they have a different face as compared to that of other animals. They share 97 percent of their DNA with humans and laugh and smile just like us which makes them look even more cute.

How big is a Sumatran orangutan?

The Sumatran orangutan is 36-52 in tall. They usually look big in size that might scare human beings from far away. They are also heavy in weight and are huge as compared to the other species of their breed.

How fast can a Sumatran orangutan move?

How much does a Sumatran orangutan weigh?

What would you call a baby Sumatran orangutan?

The diet of Sumatran orangutans consists of 60% fruits. Their diet includes lychees, mangosteens, mangoes, and figs. They also eat young leaves and also shoot insects, soil, tree bark, and eggs and small vertebrates sometimes. They are very strong and are like humans so they eat according to their weight and how much nutrition is needed for their body.

No, they are not loud. The Sumatran orangutans use a variety of vocalizations in their communication in order to avoid attracting the attention of the other Sumatran orangutans and other predators. They use loud scratches that serve as a low emergency signal in the mother-offspring coordination. They make a variety of different sounds that includes a kiss squeak when agitated and a raspberry during building the nest and the newborn infants make a soft hooting call. They make sounds so as to communicate with the other orangutans and with their infants as well.

The Sumatran orangutans are a species of orangutans and are only found in dense and tropical forests of Sumatra. They prefer areas which have an abundance of food and usually keep hanging around trees. Their arms are incredibly strong and long, and their arms are comparatively long as compared to their legs. The orangutan is one of humankind’s closest relatives and looks similar to human beings and also possesses some of the physical traits of human beings.

Here at Kidadl, we have carefully created lots of interesting family-friendly animal facts for everyone to discover! You can even occupy yourself at home by drawing one on our Sumatran orangutan coloring pages.