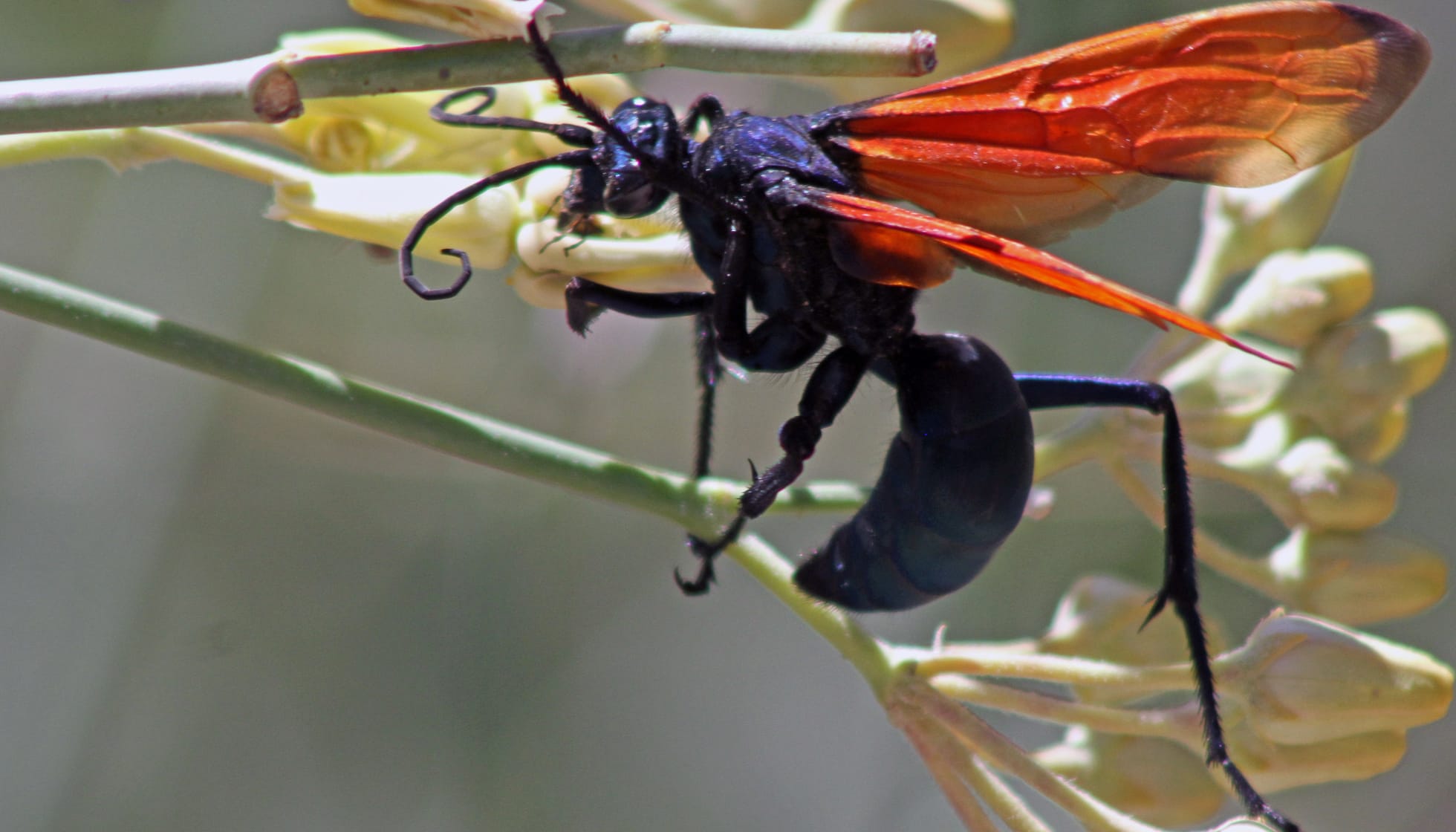 Tarantula hawks are a type of long-legged spider wasp that preys on tarantulas and other large spiders. They paralyze their prey with a vicious sting before dragging it to its burrow to act as a form of living food. Their scientific name is Hemipepsis ustulata. The tarantula hawk lays a single egg on its prey and after the egg hatches, the larva eats the prey while it is still alive. The tarantula hawk wasp has a long stinger that can go up to 0.1062992 inches (0.27 cm) long and has an extremely painful sting.

Tarantula hawks use this sharp stinger on their prey, usually tarantulas. The paralyzed spider is then dragged back to the tarantula hawk nest where a single egg is laid in the spider’s abdomen and the fertilization process begins. If the egg is fertilized the resulting sex is female, if it is unfertilized the sex is male. Once the egg hatches, the larva creates a hole in the abdomen of the spider. It starts feeding through the spider as a form of the parasite. The process from larva to adult takes several weeks. After it becomes an adult it exits the spider to continue its life cycle as a wasp.

You may also check out the fact files on flesh flies and mayflies on Kidadl.

What type of animal is a tarantula hawk?

The tarantula hawk is a type of parasitic wasp belonging to the family of Pompilidae.

What class of animal does a tarantula hawk belong to?

Tarantula hawk belongs to the Animalia kingdom within the Insecta class. A few other wasps that belong to the same class are horntail wasp, European paper wasp, and red paper wasp.

How many tarantula hawks are there in the world?

The tarantula hawk is categorized as of Least Concern, according to the IUCN, as it is found commonly in many parts of the world.

Where does a tarantula hawk live?

The tarantula hawk is found commonly in many areas in the world such as deserts, woodlands, grasslands, and rainforests. Some of the regions where they are found are in the continents of North, South, and Central America, Madagascar, Asia, and Africa.

What is the habitat of a tarantula hawk?

Tarantula hawks are found more commonly in areas with the dry and arid climates of the Americas, Madagascar, Asia, and Africa. Their habitat often finds overlaps with the regions that are habitable for spiders. This is because they paralyze spiders permanently in order to for them to lay eggs and feed their young. The food of adult wasps is the nectar of flowers and the juice of berries.

Who do tarantula hawks live with?

Tarantula hawks are territorial species that live on their own and are solitary by nature. Especially the males of the species do not like to share their territory with other tarantula hawks. If there is an overlap in the territory of the tarantula hawk location, they have aerial combat to settle the winner of that specific location. During the mating process, they live in burrows.

How long does a tarantula hawk live?

Tarantula hawks have a life cycle common to that of wasps in general with the larva living up to three weeks and an adult tarantula hawk has a lifespan of two months.

Tarantula hawks breed for a duration of two and a half months where the male of the species is found commonly on the ridges of mountains. They specifically like the Palo Verde trees and during these times.

Male tarantula hawks get very territorial over the area they have chosen. Conflicts are resolved through aerial combat with large wasps having a sizeable advantage over the smaller male wasps. Female tarantula hawks only visit in order to mate and do not stay back to nest or feed.

Once the mating season is over, the tarantula hawk stings a viable spider and paralyzes it. It drags the spider back to its nest or burrow and lays an egg inside the spider’s abdomen by creating a small hole. Once the larva is hatched it feeds on the paralyzed but living spider for as long as possible until it is ready to exit the host spider.

Tarantula hawks are categorized as of Least Concern. This is because they are found across the world despite having predators. Their consistent mating and reproduction lifecycles ensure there are new larvae and adult tarantula hawks in nature at any given time.

Tarantula hawks have a metallic blue-black shell-type body with rust-colored wings attached to them. Their color is quite distinct compared to other species of wasps. They tend to have long legs and very long stingers that can cause excruciating pain if used. They weigh a meager 0.020 oz (0.56 g) and an average tarantula hawk is about 2 in (5 cm) in length.

Tarantula hawks do not qualify in the cuteness quotient category as they are a type of wasp. While they are not extremely dangerous to humans, the color of their bodies and wings make them appear more scary than cute.

There is no known research around the behavior of how tarantula hawks communicate. But a few indicators could lie in the bright color of their bodies and wings, as well their other characteristics such as odor and flight.

How big is a tarantula hawk?

A tarantula hawk’s size is comparable to wasps of other species in size and stature. One thing is for certain, they are one of the largest forms of parasitic wasps. The females in specific are notable for having a large stinger compared to other wasp species and can be as large as 0.1062992 inches (0.27 cm) in length.

How fast can a tarantula hawk fly?

Tarantula hawks are not particularly known for speed. Their natural instinct is to be active during the summer and fly low in order to hunt for spiders.

How much does a tarantula hawk weigh?

Tarantula hawk size and weight are a minuscule 0.020 oz (0.56 g) and are comparable to other species of wasps.

Similar to most other insects and wasps, in particular, the males and females of the tarantula hawk species do not have separate names.

What would you call a baby tarantula hawk?

Tarantula hawk wasps are first born as larvae that remain as larvae for nearly 3 weeks before reaching maturity as an adult of the species. The young do not have any other name.

Tarantula hawk wasp adults commonly feed upon the nectar of flowers, pollen, and the juices of berries. But as larvae in the burrow, they feed upon tarantulas and other spiders as a form of the parasite.

Many people commonly maintain bee farms or ant farms. However, the tarantula hawk is not one that can be maintained as a pet for humans in its natural form. Tarantula hawks are a type of wasp with one of the most painful stings in the world and therefore would certainly not make good pets.

Interestingly, the tarantula hawk wasp is considered the official state insect of the US State of New Mexico. They have long spindly legs that they use in order to catch their prey.

While a lot of animals don’t eat the tarantula hawks, one of their predators is the roadrunner.

A tarantula hawk’s wasps bite is considered to be the second most painful insect sting in the world. On a scale of 1 to 4, in an index of severity of pain caused by an insect bite, tarantula hawk stings are a massively painful 4.

To compare this rating, a normal wasp is only a rating of 2. Despite having such potent stingers, the tarantula hawk is not particularly dangerous to human beings, and if stung by a tarantula hawk, the pain will only last a few minutes. While the stings are extremely painful, unless you are allergic to a wasp sting, the application of ice on the affected region can help minimize the swelling and alleviate the pain.

How long does it take tarantula hawk eggs to hatch?

The entire process from the time a single egg is laid inside the spider’s abdomen to the point the larvae hatch and feed on the spider as a parasite takes about 35 days.

How many legs does a tarantula hawk wasp have?

A tarantula hawk has six legs.

Here at Kidadl, we have carefully created lots of interesting family-friendly animal facts for everyone to discover! Learn more about some other insects including potter wasp facts and bald-faced hornet facts.

You can even occupy yourself at home by coloring in one of our Tarantula Hawk coloring pages.