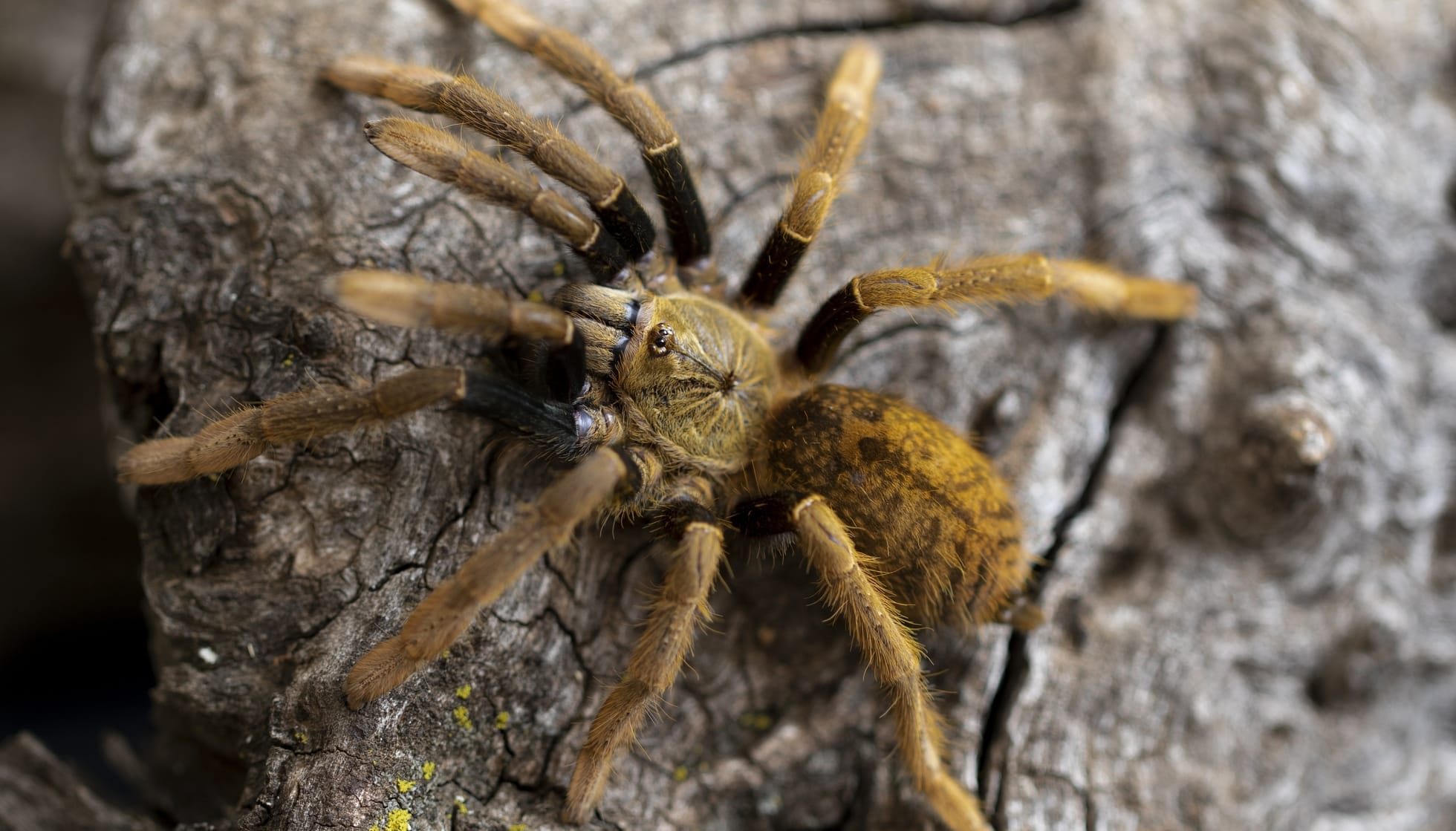 Tarantula spiders belong to the family Theraposidae. This is a family that features lots of large and often hairy spiders. The term can sometimes be used to describe members of the infraorder Mygalomorphae that they fall under as well. Tarantulas are found commonly in South, Central, and North America. They are carnivorous in nature and are known to go after large insects such as centipedes and millipedes. They also hunt small animals like lizards, bats, and mice. They have recently become popular as pets and thrive in captivity under specific circumstances.

You can also check out our fact files on the yellow sac spider and the Brazilian wandering spider too.

What type of animal is a tarantula spider?

Tarantulas comprise a group of large and usually hairy spiders. Examples include the missouri tarantula and goliath bird-eaters.

What class of animal does a tarantula spider belong to?

How many tarantula spiders are there in the world?

Around 1000 species of tarantula have been identified. Some of these are very rare, such as the spruce-fir moss spider (Microhexura montivaga), and are barely present in the wild. Overall, the population of tarantulas is large, though confined to certain areas.

Where does a tarantula spider live?

Various species of tarantulas live throughout North and Central America, including Mexico and the United States. They are also present in South America. Cyprus, Spain, Portugal, southern Italy, and Turkey are the main hotspots in Europe and they are also found in Asia, throughout Australia as well as in Africa. The Ryukyu Islands in southern Japan are a noted tarantula hotspot in Asia.

What is a tarantula spider's habitat?

The natural habitats of a tarantula spider range from the rainforest and scrubland, to cloud forests, deserts, and mountains as well as grasslands like pampas and the savanna. Tarantulas can live on moss on rocks, burrowing underground or on trees, depending on their predators and prey in the area.

Who do tarantula spiders live with?

How long does a tarantula spider live?

Most tarantula species take between two and five years to reach maturity, but some may take up to 10. Males tend to have just one year left to live after they reach maturity. Male tarantulas are rarely known to molt, but when they do they risk death. Female tarantula spiders can reach anywhere between thirty and forty years of age, and they continue to molt after reaching maturity.

A mature female tarantula is receptive to mating and laying eggs once a year. After meeting a female spider, both tarantula spiders exchange signals to establish they are of the same species before mating. Depending on the species, females end up depositing anywhere between 50 to 2000 eggs in a silk egg sac and they guard it for six to eight weeks. During this period, females often end up turning the egg sac, which is referred to as brooding, to keep any eggs from deforming. The young spiderlings eat the remains of their yolk sacs after hatching.

Many tarantulas are Critically Endangered on the IUCN Red List.

Tarantula spiders are large and hairy. They are normally brown or black, but there are a few species that are brilliantly colored as well. Their fangs are prominent and look menacing and they have eight eyes. They also have not one leg, but eight legs!

Tarantulas are typically quite scary but they can be considered very cute to people without arachnophobia.

Researchers have proposed that the vibrant colors on tarantula spiders may be used to communicate between potential mates.

How big is a tarantula spider?

The smallest tarantula spiders, such as the spruce-fir moss spider, are smaller than centipedes. The biggest, such as the bird-eating goliath tarantula (Theraphosa blondi), are bigger than small bats.

How fast can tarantula spiders move?

Tarantulas are a fast species. In tests, some tarantulas covered 5 ft (1.5 m) in a second. A Missouri tarantula can move about 10 body lengths a second at 100 F (37.8 C), as opposed to four body lengths a second at 62 F (16.7 C). Temperature, size, and their leg span all come into play when it comes to their speed and their leg span makes them fast and able to catch prey easily.

How much does a tarantula spider weigh?

Male and female tarantula spiders do not have specific names.

What would you call a baby tarantula spider?

A baby tarantula spider is called a spiderling.

A tarantula’s diet depends on how large it is. They eat insects, centipedes, millipedes, and other spiders. Larger species of tarantula have been known to eat insects too, but also species of mice, bats, smaller snakes, birds, and lizards.

Tarantulas are important to the ecosystem as they eat pests like mice. However, they are harmful to humans as their fangs and bites are venomous.

Some tarantulas live as pets in captivity, they cost between $25-$75. Sadly, it is unlikely that tarantulas can recognize their owners.

Some tarantula species are preyed upon by a species of predators, known as tarantula hawk wasps. These predators can track a large tarantula to its lair, deliver a paralyzing sting, and then drag it back to its burrow to lay its egg on the prey’s abdomen. The predator wasp then seals the tarantula in the burrow. The wasp egg hatches into wasp larva that feeds on the non-essential bits of the spider. Tarantula species have to be aware of these wasp predators throughout their lives.

What is interesting about tarantulas?

Tarantulas do not sleep as we know it but they do have definite circadian rhythms, separating a period of rest and of activity.

While tarantulas can be venomous, their bites do not kill humans, and their urticating hairs don't either, though they can sting. They don't tend to bite as they are more docile than friendly; they are more to chase and bite lizards. They have fragile exoskeletons, and people prone to dropping things should not keep them as pets!

Here at Kidadl, we have carefully created lots of interesting family-friendly animal facts for everyone to discover! Learn more about some other arachnids including the six-eyed sand spider, or the orb-weaver spider.

You can even occupy yourself at home by drawing one of our tarantula spider coloring pages.