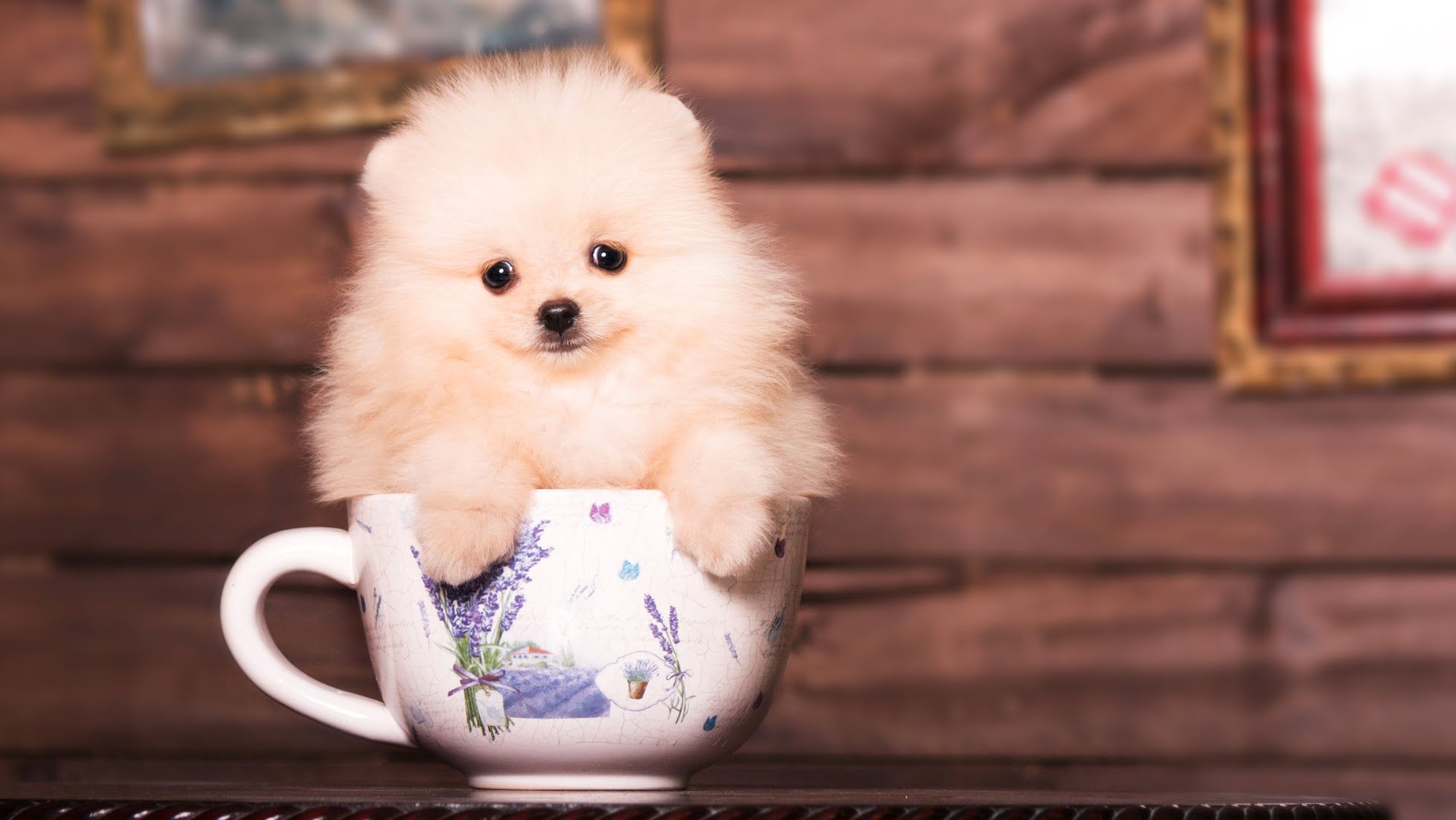 Teacup Pomeranians, also known as Miniature Poms or Pocket Pomeranians, are a small version of the average Pomeranian breed. The origin of the Teacup Pomeranian goes back to their Arctic sled-dog ancestors! The fluffy and loyal temperament of these dogs has made them one of America's favorite breeds of dog for decades and a great household addition.

These dogs are extremely friendly in nature and get along with humans greatly, except for strangers, as they can show aggression towards them.

Teacup Poms may look small but they are big at heart! They will challenge dogs four or five times bigger than them and take them on! They do not lack confidence. This attitude along with their energetic nature makes them a great pet to be around! Here is to hoping that you will end up adopting or buying a Teacup Pomeranian after you finish reading this!

This delicate tiny breed is descended from huge Icelandic sledding dogs. In the 1600s, they were a favorite option among royal families, and their popularity grew. The trend for smaller Pomeranians was made popular by Queen Victoria, whose dog was significantly smaller than the typical Pomeranian during her reign in the 1800s. The fascination with breeding this dog smaller and smaller has only risen in recent years.

Teacup Pomeranians are excellent family pets. They take pleasure in participating in all parts of family life and are good with kids. However, because they are snappy during puppyhood and are easily wounded due to their size, they are not suitable for homes with little children.

Their personality is anything but small, despite their tiny size! They're a lot of fun to play with, love to snuggle, and are, of course, really cute. For families with older children, adult-only households, or singles, they are the appropriate companion.

They have vivacious personalities and like going on walks and playing with their human companions. Teacup Pomeranians, despite their tiny legs, have a lot of stamina and can go for long walks provided the weather isn't too hot — they are heat sensitive.

This little breed can live in a variety of settings, including apartments and modest living quarters. Teacup Pomeranians make excellent companions for city dwellers who may not have access to a large garden.

These bright tiny creatures require a lot of stimuli. A regular training plan might help to exercise their keen minds. They prefer to be engaged in some activity and will start barking if they become bored. Give your Teacup Pomeranian lots of chew toys.

Because Pomeranians are noted for their short attention spans, keep training sessions brief and enjoyable. The only way to teach this delicate breed is to use positive reinforcement. If they are treated sternly, they may grow unhappy or even act out. You'll probably get better and happier outcomes if they're working for love or a treat.

Teacup Pomeranians eat just 1/4–1/2 cups of food every day due to their small stature. Because of their small bodies, they are prone to digestion problems and low blood sugar, thus it is critical that they are well-nourished.

Pomeranians are known for their good looks, so it's no surprise that they require a lot of maintenance to look clean and polished. Some dog owners like to trim their dog's fur, although this is more of a personal preference than a requirement.

Dental hygiene and frequent nail clipping are crucial for your puppy's health. Brushing them at least three times a week, and as much as every day during high shedding seasons is also necessary to remove excess fur. Pomeranians don't need to be bathed more than once every few months, and they seldom need haircuts.

A typical Teacup Pomeranian costs somewhere between $1,000 - 6000 or more. Purchasing a puppy from a major commercial breeder will be more expensive than purchasing one from a hobby breeder. Because of the unethical breeding procedures that are common with Teacup dogs, small-time breeders are the better choice.

Adoption is a straightforward procedure. It begins with an application form, which, if approved, leads to a personal meeting with the dog and a house inspection by the shelter before the adoption is finalized.

What type of animal is a Teacup Pomeranian?

What class of animal does a Teacup Pomeranian belong to?

The Teacup Pomeranian dog belongs to the mammal class of animals. The presence of mammary glands to feed their young ones, with three ear bones, fur or hair, and the neocortex (region of the brain) qualify them as mammals.

How many Teacup Pomeranians are there in the world?

An accurate count of the total population of the Teacup Pomeranians in the world is unknown. And with this popularity, their demand is also high due to which breeders breed these dogs which further adds to the population.

Where does a Teacup Pomeranian live?

The origin of Teacup Pomeranians goes a long way back in history as these dogs have actually descended from larger sled dogs that were Spitz-type dogs found in the Arctic.

Today, the Teacup Pomeranian dog can be found in households all across the world as these dogs have gained a reputation for being friendly dogs.

What is a Teacup Pomeranian's habitat?

The Teacup Pomeranian is best suited as an indoor dog due to its small size. However, just because they are suited for indoors

Who does Teacup Pomeranian live with?

Teacup Pomeranian is an extremely affectionate family dog and loves to live around humans. However, since the Teacup Pomeranian temperament is more towards the affectionate side, this small dog easily becomes attached to its owner, meaning that leaving this dog alone for a while will cause it to go through separation anxiety.

How long does a Teacup Pomeranian live?

The Teacup Pomeranian, like most purebred Pomeranians and normal size Pomeranians, has a lifespan of around 12-16 years when provided proper care and a balanced diet. Even though these dogs are usually healthy, their lifespan can be cut short due to health problems.

Teacup Pomeranians reach adolescence when they are six or seven months old and reach sexual maturity when they are 10 months old. Teacup Pom females have a gestation period of 63 days after mating.

When the male senses that the female is in heat, he will sniff her vulva, and if the female is receptive, she will hold her tail to the side, allowing the male to mount her and thus engaging in the act of mating.

Currently, the Teacup Pomeranian is 'Not Evaluated' on the IUCN Red List as these species are often found with breeders.

These dogs have a thick coat of fur with a fanned tail and eyes that are dark and alert. These dog breeds come in a variety of coat colors which can range from red, black, brindle, white, cream, orange, and lavender.

The fluffy double coat on this dog makes it look cute, so much so that it will resemble a teddy bear! The miniature frame of this tiny dog and the tiny cute ears brings out their cuteness that is hard to resist!

How big is a Teacup Pomeranian?

Teacup size in dogs is usually used for miniature versions of specific breeds. The Teacup Pom is small in nature as this dog does not grow at all and will stay small like Pomeranian puppies! This dog has a maximum body length of 3-7 in (7.6-17.8 cm) and reaches 6-10 in (15.2-25.4 cm) at shoulder height. They are in the same range as Toy Poodle.

How fast can a Teacup Pomeranian run?

The average Pomeranian can run at an average speed of 8-12 mph (12.9-19.3 kph), so given this data, we can assume that the dog runs at a little slower speed.

How much does a Teacup Pomeranian weigh?

Teacup Pomeranians are genetically predetermined to be small for as long as they live, meaning this dog will not see many changes in its body size or weight. Like a Teacup Yorkie, an adult full-grown Teacup Pom weighs between 2-4 lb (0.9-1.8 kg) for much of its life since obesity is not an issue for this cute dog.

Teacup Pomeranians share the same name as all other dog species do with the male and female. A male teacup is called a dog and a female is called a bitch.

What would you call a baby Teacup Pomeranian?

A baby Teacup Pomeranian, much like other dog babies, is called a puppy. These puppies look like the micro version of a normal size pomeranian!

The main part of the diet of this breed should be high-quality dog food. You should feed your Teacup Pom diet that is specifically made for small-breeds, dog food specially made for Pomeranians are an even better choice! As these have small morsels that are easy to chew.

Healthy vegetables like baby carrots and beans should also be fed to keep their health good and diet balanced. Do remember, a well-fed puppy will have the best fur coat as it grows up!

This dog is not slobbery! If you are a person who does not like dogs drooling all over your furniture and house, then this dog is perfect for you!

Absolutely! Teacup Pomeranians are amazing pets because of their friendly nature. These dogs are great with old people and kids and will adapt easily to a house that has more than one pet. They are great even for novice dog owners who do not have much experience with dogs.

If you are planning to buy one, you can find a Teacup Pomeranian from qualified breeders or pet stores! However, it is worth knowing that the price tag on these dogs is a heavy one.

These dogs belong to the most expensive Teacup breed variations.

Teacup Pomeranians are susceptible to trauma, which can sometimes lead to their death.

Do Teacup Pomeranians bark a lot?

Teacup Pomeranians bark a lot! These dogs are not really friendly towards strangers and will bark when they are approached by strangers or if a stranger comes to your home. A good way to get past this behavior is to start early training and let your Pomeranian puppy know it's bad to bark at strangers.

Are Teacup Pomeranians easy to train?

Yes, this breed is a smart dog and they respond positively to training. Like with most dog breeds, it is important for them to socialize ever since they are puppies.

It is important to help them socialize as they are territorial and can be overprotective of their owners. Unnecessary barking can be stopped with socialization training. Training them to be confident and happy will also help them in maintaining good behavior. If you do not have the time to train them yourselves, you can enroll them in local dog training classes as it gives them a chance to get to know other dogs but do make sure it is for small dogs like a pom, Japanese Spitz, as larger dogs can be aggressive towards your puppy.

You can even occupy yourself at home by coloring in one of our free printable dog face coloring pages.