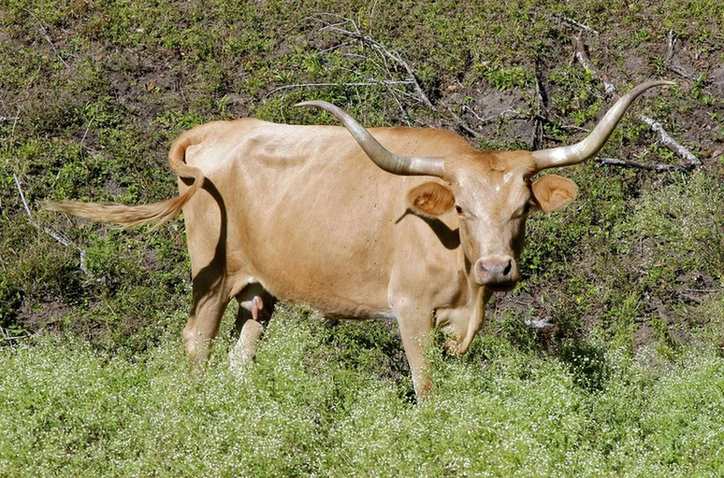 The Texas longhorn cattle descended from the first cattle introduced in the Americas by the Spanish colonists and Christopher Columbus. Until the 17th century, only herds of Spanish cattle inhabited the plains of America, especially in Mexico brought by the Spanish sailors. In the 17th century, some Anglo-American cattlemen brought some of these breeding herds north from the southern and midwestern countries. The natives of Texas began to breed these cattle obtained from the open range near the Rio Grande and Nueces River with their own type of cattle. This resulted in the formation of a type of cattle animal with very long horns that came to be known as Texas longhorns and became very popular.  However, from the first half of the 1900s, the Texas longhorn cattle stock steeply decreased in number and became very rare throughout its range. Many measures were taken to popularize the longhorns and prevent their extinction in North America, such as registering them in the Texas Longhorn Breeders Association of America, in Oklahoma, organizing a cattle drive of steers from Texas to Kansas, and introducing the longhorn 'Bevo' as the mascot of the University of Austin. Currently, the Texas longhorn herd is kept by many ranchers. To know more about Texas longhorns, continue reading these fascinating facts.

For similar content check out Highland cattle facts and Ankole-watusi facts too.

What type of animal is a Texas longhorn?

The Texas longhorn is a type of cattle breed that is named after its exceptionally famous long horns. These entirely new world hybrid cattle breeds are formed by the mix between English cattle and the Spanish rentilo cattle stock that were brought to America in the 1800s.

What class of animal does a Texas longhorn belong to?

The unique breed of Texas longhorn cattle, of the family Bovidae, is a warm-blooded cattle animal that belongs to the class Mammalia.

How many Texas longhorns are there in the world?

The Texas longhorns multiplied in large numbers after their introduction in the plains of Texas. This is because they can have calves without much labor or difficulty. Their current population is not known, however, measures have been undertaken to restore this cattle population in the future.

Where does a Texas longhorn live?

During the early 1800s, the longhorn breeds became commonly visible throughout Texas. Since then the Texas longhorns started to evolve in North America and lived freely for the next two decades. They also faced a huge demand in California during the California gold rush and thousands of Texas longhorns were driven to California from Texas. Unfortunately, the U.S. Civil war put an end to their import by the Anglo-American cattlemen. Gradually they became very rare and the market for the longhorns decreased. In the Wichita Wildlife Refuge forest in southwestern Oklahoma, the cattlemen were paid to keep small herds of Texas longhorn cattle. However, after being recognized by the Texas Longhorn Breeders Association of America the market for Texas longhorn once again developed. At present, apart from North America, they are also bred in Europe and Australia. Apart from Texas, the cattle livestock also thrives in northern plains, Canada, northeast and the Pacific Northwest, and the southeastern states. The University of Austin has also adopted this bovine cattle as its mascot as its link to Texas history.

What is a Texas longhorn's habitat?

The Texas longhorn cattle are known to be a hardy cattle breed that can adapt very easily to various types of natural habitats. They inhabit open grasslands in cold as well as in hot places without any problem.

Who do Texas longhorns live with?

The Texas longhorn cattle were produced as farm animals. They are herd animals grazing on grass in small or large herds according to the farm size.

How long does a Texas longhorn live?

The Texas longhorn cattle are healthy and hardy cattle that can mature very fast in comparison to other bovines. They have high fertility rates and can conceive at an early age of only one and a half years. They are also used in producing crossbreeds with other cattle for their high fertility. The cows have a certain body shape that makes mating easier for their own type and other types of bulls. Texas longhorns can give birth to babies up to 16-20 years old. After a gestation period of 285-295 days, the cow gives birth to a trail of 20 or more calves. The Texas longhorn cattle calf looks like a fawn and is protected by its mother. The healthy cattle breeds do not have much trouble giving birth to calves. The steers on the other hand are incapable of producing babies as they are neutered at a very young age.

The Texas longhorn is Not Listed in the IUCN Red List. Surveys have estimated that their population is critical. They also faced near extinction in the 1900s. However, measures have been taken to protect them with an expectation of a rising population in the future.

Some distinct characteristics of the Texas longhorn cattle are its horns and skin colors. They show a large variety of hair colors and patterns like red, white, orange, black, brindled, and speckled patterns. Some breeds show variations in patterns and colors with age. The most recognizable trait is their long and laterally spread longhorns that can grow up to 7 ft across.  The texas longhorn cattle are normally heavily built. The characteristics of the livestock at the time of its evolution depended on the genes of its breeding stocks, this led to the survival of a healthy and sturdy breed with a good immune system, profoundly sound and muscular limbs, good health, and disease-resistant. Their body size generally depends on their natural environment. For example, the breeds living on the ranch have a larger build than those in arid places. Their legs are thick with high hooves that help them to cover long distances. They are smaller in size and slimmer than other beef breeds.

The Texas longhorn has a striking appearance. They have sharp features and their face looks very nice. Their different and unique body colors also make them a favorite animal of many.

Like all bovids, the Texas longhorns communicate with their herd mates by vocalizations or body language.

How big is a Texas longhorn?

How fast can a Texas longhorn run?

Texas longhorns are very fast runners and often participate in races. Unfortunately, their exact speed is not known.

How much does a Texas longhorn weigh?

What would you call a baby Texas longhorn?

The babies of Texas longhorns are referred to as calves.

The diet of the herbivorous Texas longhorns mainly includes grass, fruit, and hay. The cattle can also feed on poor vegetation of open ranges.

Texas longhorn cattle certainly look a bit wild due to their robust body and large horns. They must be handled cautiously because of their horns, however, the cattle are generally peaceful in nature and won't attack unless provoked.

Texas longhorn cattle make a wonderful pet. They are one of the easiest cattle to handle and are a favorite for cowboys to ride. The cattle is also famous for its beef. However, less human interaction might make them aggressive at the sight of humans.

The origin of the Texas longhorns in Texas is a result of the decline of the buffalo population following the Civil war. To restore the balance in the wild, these longhorns were brought to texas as grazers for farmlands to replace the need for buffalo.

Do Texas Longhorn females have horns?

Both the bulls and cows of the Texas longhorn cattle carry an exceptionally large and impressive pair of horns that grow 50% within their first year as a calf, and the next 50% grows with age.

Do Texas Longhorns lose their horns?

Texas longhorns have thick and strong horns that do not shed with time or age. The horns remain attached to their head for their entire life. The only shedding that occurs is some natural flaking of the horn tissue with growth and sometimes the tip of their horns might break due to digging into the soil.

Here at Kidadl, we have carefully created lots of interesting family-friendly animal facts for everyone to discover! Learn more about some other mammals including zorse facts or zebu facts.

You can even occupy yourself at home by coloring in one of our free printable texas longhorn coloring pages.