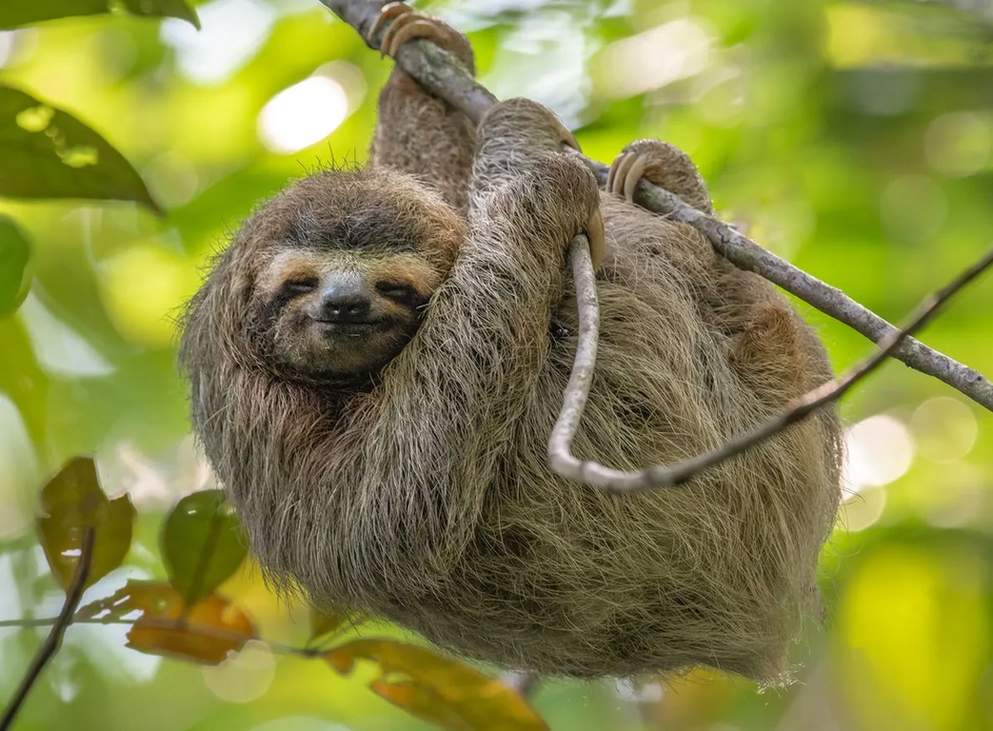 If you liked this article with amazing three-toed sloth facts, check out other articles about the leopard seal and the fennec fox.

Not extinct but some species are critically endangered

What type of animal is a Three-Toed Sloth?

The three-toed sloth is a type of arboreal animal which means it is well adapted to hanging on to or living on a tree.

What class of animal does a Three-Toed Sloth belong to?

The three-toed sloth is an animal that belongs to the class Mammalia.

How many Three-Toed Sloths are there in the world?

Where does a Three-Toed Sloth live?

The four species of the three-toed sloth live in the tropical and neo-tropical rainforests of Central and South America.

What is a Three-Toed Sloth's habitat?

A three-toed sloth's usual habitat is in the tropical rain forests. Sloths like to live at the very top of the canopy of the huge trees as it allows them to camouflage.

Who do Three-Toed Sloths live with?

Sloths are actually quite solitary animals. They prefer to live alone on their own rather than living together in packs in a forest. Male sloths are usually very shy and keep to themselves while the female sloths may get together from time to time.

How long does a Three-Toed Sloth live?

The members of the three-toed sloth genus have an average lifespan of 25-30 years.

Three-toed sloths do not have a proper breeding season during which they reproduce. These animals can breed throughout the year however, they reproduce at the same pace as they move - extremely slow! Female three-toed sloths reach sexual maturity at the age of three while the males reach maturity around four to five years of age. They typically look for a mate and the males start courting when female sloths let out a shrill, monotone sound to imply that she is ready. The gestation period differs for each species and the pale-throated sloth has a gestation period of five to six months. All the female sloths only give birth to one baby at a time. Three-toed sloths even give birth while hanging upside down from the tree!

Sloths have long limbs, curved claws, and a stumpy, short tail. Their head is quite small and has small ears which cannot be seen normally. Depending on the species, they have different types of colored fur such as gray, white or brown. They use their claws to eat leaves and hang on the branches of the trees. Their fur is not very long.

Three-toed sloths are extremely cute! With their brown, grey fur, curved claws, small faces, and long arms, these animals always look like they have a big smile on their faces. Even the fact that they move so slow makes them quite endearing.

Although three-toed sloths grow into solitary animals in the wild, they still communicate with each other through the medium of sound. They make a peculiar sound that helps them reach out to others of their kind. Baby sloths make a bleating sound when they are separated from their parent. They may also make a high-pitched squeaking sound that helps the parent understand if the baby is in any danger.

How big is a Three-Toed Sloth?

How fast can a Three-Toed Sloth move?

Three-toed sloths are very slow and can only travel 0.15 miles in a day. They move through the canopy in the wildlife at a rate of about 40 yards each day.

How much does a Three-Toed Sloth weigh?

Sloths, whether it is a two-toed sloth or a three-toed sloth, do not have separate names for the male and female types of their species. So they are denoted as males and females.

What would you call a baby Three-Toed Sloth?

A baby three-toed sloth is called a cub.

Although two-toed sloths are omnivorous, three-toed sloths are mostly herbivorous and have a leafy diet consisting of plants and leaves. They find these leaves in the trees that they hang from. Many scientists think that their diet of only leaves is insufficient and not nutritious enough.

While Sloths are extremely cute, they would not make a good pet. Firstly, they are not suited to the domesticated environment that most pets are comfortable in. They need a proper forest to thrive in and eat. Secondly, it has a restricted diet that does not allow it to live anywhere except for a forest. Thirdly, it is very shy and does not like human contact at all. Consequently, it is better to leave the three-toed sloth in the wild in the forests where it prefers hanging from the trees!

Sloths have a unique habit that helps them be safe from predators in the wild. Since they are excessively slow and cannot move very fast to defend themselves from predators - they rarely leave the tree that they are hanging from and come to the ground. They come down to the ground once a week to defecate and urinate after which they go back up again. While it sounds funny, the entire act of slowly going to the ground can be quite dangerous for the animal.

Why is the pygmy three-toed sloth endangered?

The International Union for Conservation of Nature (IUCN) has categorized the pygmy three-toed sloths to be endangered. This species of sloth is endangered due to the deforestation and destruction of its habitat in the wild, the presence of feral cats in the forests, and lack of sufficient legal protection for this sloth has led to a sharp decrease in its population. Conservation of these sloths has become very important.

How many three-toed sloths are left?

A 2012 study by the IUCN estimated that only 79 pygmy three-toed sloths are left in the wild. As for the other species, the data is deficient but they are not endangered or at risk of extinction. Therefore, conservation techniques are being used to restore their population in the wildlife.

Here at Kidadl, we have carefully created lots of interesting family-friendly animal facts for everyone to discover! Learn more about some other mammals including the anteater and the pygmy slow loris.

You can even occupy yourself at home by drawing one of our Three-Toed Sloth coloring pages.