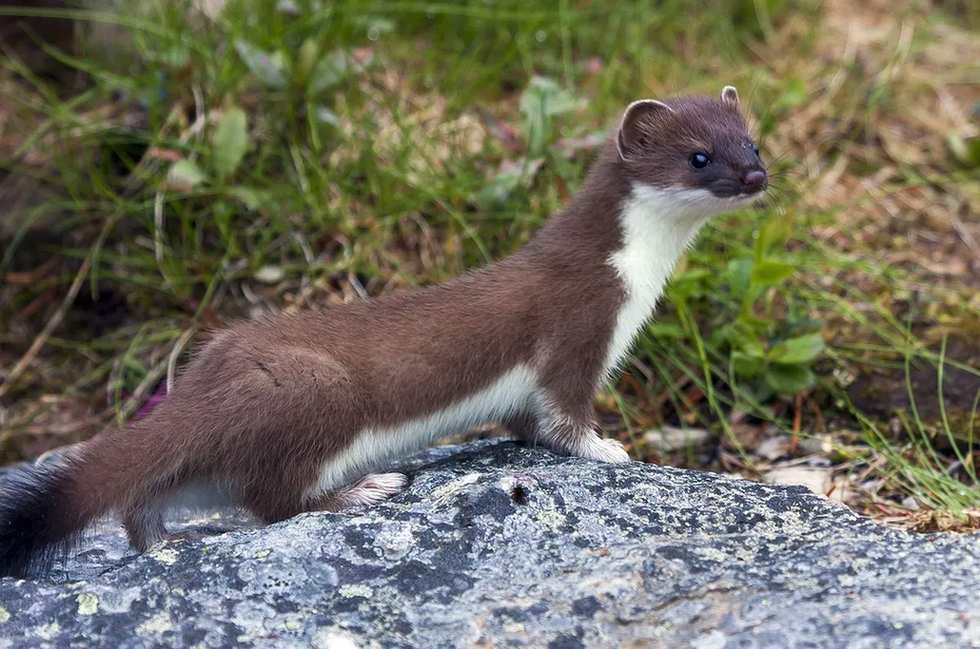 Weasel (Mustela nivalis) is a mammal that belong to the genus Mustela of the family Mustelidae. They are active predators and small in size, they have long, slender bodies with short legs. An adult weasel (Mustela nivalis) does not grow more than 10 inches in size, and the smallest weasel can weigh as little as 0.05 lb. There are various species of weasel that are present in the wild including black weasel, snow weasel, least weasel, Siberian weasel, ermine weasel, crimson weasel, screeching weasel, white coated weasel, garden weasel, and stoat weasel.

The weasel (Mustela nivalis) is the UK’s smallest carnivore and likes to eat voles, mice, and small birds as well. They also eat young rabbits in their diet. The weasels are the smallest carnivorous species. The female weasels are bigger than male weasels in size. Weasels are hyper in nature and are territorial animals, and they are not afraid to attack things that are larger than them. After reading these interesting facts about weasels, learn more about animals and check out Indian palm squirrel facts and muskrat facts.

What type of animal is a weasel?

The weasel (family mustelidae) is a type of animal that belongs to the family of Mustelidae. Weasels are small mammals that have long and slender bodies and necks, short legs, and small heads.  The fur of weasels is short but is dense and they have a slim tail that is pointed at the tip.

What class of animal does a weasel belong to?

The class of animal that weasel (mustela nivalis) belongs to is mammals. The genus Mustela also includes ferrets, stoats, polecats, and mink as well.

How many weasels are there in the world?

There is no specific number as to how many weasels there are in the world. Weasels live in different habitats and are found in different parts of the world.

Where does a weasel live?

Weasels live in roadsides, woodlands, open fields,  thickets. Weasels are adaptable in nature and live all over the world. Long-tailed weasels live in North America, while the tropical weasel lives in South America. The weasel's common habitat is in burrows near urban areas.

What is a weasel's habitat?

Weasels are found in different types of habitats, including urban areas, pastures that are lowland,  woodland, marshes, and moors as well. Their habitat is not very common in the places where their prey are scarce such as the dense woodland which has ground cover that is sparse and also in higher altitudes.

Who do weasels live with?

The weasel (mustela nivalis) is a solitary creature and usually prefer to live alone and fend for themselves in the wild. They come together for mating or weaning young, otherwise they remain alone. They usually live in burrows to be safe from predators.

How long does a weasel live?

The lifespan of the weasel animal ranges between 2-10 years. The average life span for a pet weasel is 10 years while the average life span for a wild weasel is only around 2-3 years. Their lifespan depends on different factors such as environmental factors, surroundings, weather conditions, their food and nutrition, and also different factors that determine the life of weasels.

Weasels are not extinct. The weasels are also killed by gamekeepers who are a threat to weasels. It is important to conserve and protect weasels as there are chances that they might become an endangered species due to some environmental factors and main threats.

Weasels have a long, thin body, black eyes, and have short fur. Their head is brown and back with a white or yellow underbelly. Weasels are related closely to badgers and skunks. The sizes of weasels vary from one weasel to another. The color of the weasels is usually brown, gray, or blackish, with markings that range from white to yellow. During the winter season, the fur of weasels changes to all white in color according to the changes in the body. Weasels are small creatures as they are very small in size. The short tailed weasel is cute and tiny, but these animals are also ferocious. The weasels' size is not a barrier when catching prey. Though they look cute, there are chances that they might attack another other species even if they are tiny in size.  You must try and avoid having a weasel as pet if you do not have any previous experience with the species.

Weasels have different ways of communication, which include scents, sounds, and actions. Female weasels are known to emanate a certain scent when they are willing to mate. The weasel animal species use their sounds and actions when they need to confront others.

How big is a weasel?

How fast can a weasel run?

Weasels are geared to run at full speed and are always high-strung. They usually run fast when they see predators approaching them.

How much does a weasel weigh?

Weasels weigh around 0.26-0.33 lb. They are usually small in size and also weigh less depending on their body structure.

What would you call a baby weasel?

A baby weasel is called a kit. The female weasels raise the young weasels in the nest or the den. Baby weasels are born between April and August. Baby weasels become sexually mature when they are four months old.

Weasels are carnivores, and they eat voles, mice, and young rabbits. They live in the habitats where they can get enough nutrition and food that is required for their body. Even though the size of the weasels is small, there are chances that they might harm and attack creatures that are big in size because of their ability to attack big creatures. As a result, weasels often kill more than they could eat.

Weasels are known to be active all year long. Weasels stay active which depends on different climates and seasons, and also display nocturnal and diurnal behavior. Weasels sleep during the day and stay active during the night. Weasels spend most of the time hunting, storing excess food, and eating.

It is illegal to have a weasel as a pet. Wild weasels have an equally cute domestic cousin, the ferret, which can be kept as a pet. You cannot keep weasels as pets as they are territorial animals. They can attack things in your home and damage them as well.

The kolinsky weasels are also known as Siberian weasels and are valued for their fur. They are known to be aggressive and bold predators. The most common and widely distributed species are the stoats. In North America, the largest weasel is the long-tailed weasel. Weasels are known as killing machines. Weasels are legendary monster slayers. The winter fur of the least weasels becomes bright lavender in color when they are exposed to ultraviolet light. The small and thin bodies of weasels helps them to squeeze into tight spots to reach small prey.

When you are comparing the weasel vs the ferret for adopting a pet, you should note that ferrets have been adopted as pets for over 2500 years but weasels are wild pests.  When you compare the mink vs weasel, you will realize that though they might be similar in appearance, unlike mink weasels, they do not have webbed feet and long tails.

Weasels are good hunters as they try to hunt for larger prey though they are small in size. They are also skilled runners, climbers, and swimmers as well. Their long neck enables them to carry prey and keep it away. Weasels follow rodents into small burrows. To kill the prey, weasels will clamp down on the prey’s neck and keep biting them till the prey is dead.

Weasels have a fascinating hunting strategy that is dancing. Weasels perform a war dance as it is also known as a curious maneuver to disorient and confuse the prey and attack later. Weasels do the dance so that the prey gets confused, and the weasel can easily attack the prey. The dancing of weasels is popularly known as a war dance.

Here at Kidadl, we have carefully created lots of interesting family-friendly animal facts for everyone to discover! Learn more about some other mammals including red kangaroo, or black-footed ferret.

You can even occupy yourself at home by drawing one on our weasel mask coloring pages.