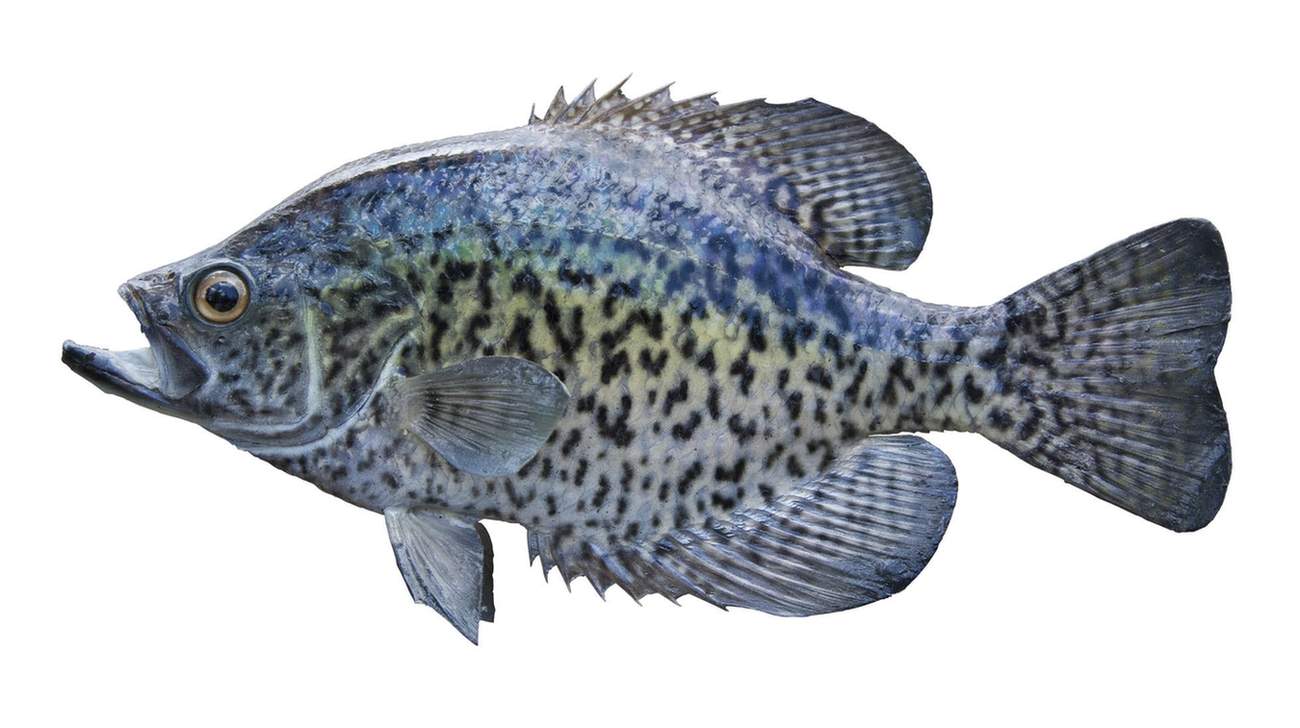 Are you interested in learning about fish? A white crappie (Pomoxis annularis) fish belongs to the family of bony fishes. They are compressed but deep-bodied with a large anal and dorsal fin. Often times white crappie are mistaken for black crappie. However, you can easily differentiate between them as black crappie has a conspicuous depression on their face and uneven spots on the side of their bodies. The size of both species is pretty similar. Crappies also have irregular vertical bars on the side of their bodies. They are said to be found in abundance in North America. However, they are natives of Texas, Mississippi, and Canada too. They can adjust to various temperatures. Hence, they are found in a wide variety of lakes, ponds, and streams. They move to deeper water when the water temperatures rise but prefer making a nest in shallow water. The preferred habitat for white crappie is clear and fresh waters, but they can adjust to different climates and water bodies, unlike black crappie, who only prefer freshwaters.

A lot of people love to eat crappie, as it is both tasty and healthy. Fishing this species is also very easy, as they are now found in a wide range of habitats. Be it lakes, ponds, or rivers they can be found in most waters.

If you like reading about animals, do check out the cownose ray and the peacock cichlid.

What type of animal is a white crappie?

A white crappie is a type of fish.

What class of animal does a white crappie belong to?

It belongs to the class of Actinopterygii.

How many white crappies are there in the world?

Where does a white crappie live?

What is a white crappie's habitat?

A white crappie's habitat consists of freshwater and reservoirs which are more than 4.9 acres in area. However, this does not mean that they are not found in small streams, rivers, and ponds. They can survive in a wide range of temperatures, though crappies prefer cool water bodies. Their distribution is therefore not limited. White crappies survive best in water that has a neutral pH range.

Who do white crappies live with?

Crappies live in schools of their own. They form schools or groups and travel together for protection. They also do this to catch prey and for group feeding.

How long does a white crappie live?

Average white crappie lives for about three or four years, however, their maximum lifespan is up to 10 years.

These species of fish are polyandrous, and they start the process of spawning during summer. Although, it varies for different regions based on the climate of the area. Males are the ones to start the process. They do so by preparing a nest underwater, making sure it has a protective cover. They make it thick and use all possible raw materials found inside the water body. Although the nest is made in a colony, they are possessive towards protecting it and do not allow other males to enter. They can bite, push or chase fish who try to threaten them in any way. Male white crappies are dominant and aggressive towards their female counterparts too. Both males and females release their egg cells at the same time. One female fish can hold more than two hundred thousand eggs, however, they do not release all of them in one spawning. The nest can hold 13,200 to 25,000 eggs from spawning. It takes 48-103 hours for the eggs to hatch. Females leave soon after spawning, however, the males stay back to take care of them. The male might eat the young fish, therefore, they leave soon after they start to swim.

According to The International Union for Conservation of Nature Red List of Threatened Species (IUCN Red List), the conservation status of white crappies is of the least concern, and their population trend is stable. One of the most distinctive characteristics of these fish is their compressed bodies. It is said, that this helps them move quickly in water. The scales on their body are olive, with silver on the sides. Their belly is white. The males are slightly different in appearance because of their black faces and back. They have 14 dorsal rays and about six dorsal fin spines that are tough. Baby crappie in their larvae state look transparent.

Although it can be difficult to identify white vs black crappie, they do have physical differences. Black crappies have more spines. For white crappie identification, people notice its spots that are in a sequence.

Crappies are cute to look at. The beautiful color of their scales and the silvery texture on the sides adds to their cuteness quotient. They look amazing while swimming in lakes or other water bodies.

The communication technique for crappie is either visual or tactile. Unlike most fish, who use vibrations, crappies use techniques that are more visual. They look for hunters and search for prey.

How big is a white crappie?

How fast can a white crappie swim?

Crappies are fast swimmers. However, their exact speed is not known.

How much does a white crappie weigh?

A white crappie weighs on average 2lb or 0.9 kg. However, it differs based on climate, species, and water.

Crappies have two species, white crappie, and black crappie. The male and female species of crappies do not have specific names.

What would you call a baby white crappie?

There is no particular name for a baby white crappie but it can be referred to as a fry, like other baby fish. This species can also be called silver perch or goldring.

A crappie eats small fish such as perch, shad, and minnows, as well as insects from the water. The kind and quantity vary for different locations.

The white crappie is considered to be one of the most delicious fish to consume. They are not just tasty, but also healthy. It is said to have a good amount of proteins and nutritional value.

Crappies are usually considered to be wild fish and are not preferred as pets. However, according to research, it is not impossible to pet them. The size of the aquarium should be big, and they must be kept with similar kinds. It is also advised to give them live food because their diet naturally consists of fish and insects. The owner will have to constantly monitor the temperature of the water, its pH range, and ammonia level.

Fred Bright’s world record white crappie was 21 in long and weighed 5 lb. This white crappie record was held for over half a century.

In Kentucky, white crappie is one of the most expensive panfish.

White crappie fishing is extremely easy and does not require any expertise. All you need is a sense of timing. Since these species form schools and search for prey during the dawn, that is considered to be the best time for fishing. During the day they are in their nest and do not come out. Thus, fishermen prefer fishing during the early morning, that is when they catch the white crappie feeding. They also use bait such as shad, minnows, and even insects to attract them in the water.

Although, they are native of Mississippi crappie is mostly found in North America.

When are white crappies most active?

White crappie is most active early morning or late evening. This is the time they go out in search of prey. They are not active throughout the day.

What does a white crappie's scientific name mean?

The scientific name for white crappie is Pomoxis annularis. Pomoxis refers to the sharp bones called an operculum, and the Latin term 'annularis' means having rings, with respect to the vertical bars present on the body.

Here at Kidadl, we have carefully created lots of interesting family-friendly animal facts for everyone to discover! Learn more about some other fish including jack fish or saw sharks.

You can even occupy yourself at home by drawing one of our White crappie coloring pages.