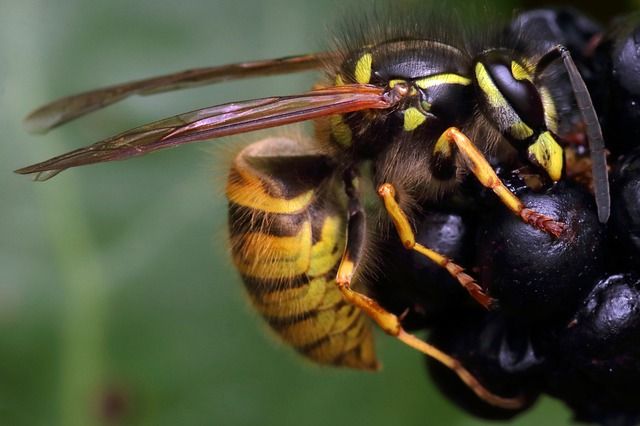 The animal kingdom is vast and astonishing.

Several species look similar from the outside, but their behavior is quite different. One such example is that of the bee and the yellow jacket.

The main difference is that a yellow jacket has black and yellow stripes like that of a honey bee, but bees are generally rounder, hairier, and less bright, whereas yellow jackets are thinner, more luminous, and have less hair on them than honey bees.

In this article, you will learn some interesting differences between these two stinging insects. A common question arises if yellow jackets can produce honey like bees. The truth is, they can't, though they feed on flower nectar, besides other insects. They are aggressive creatures and should not be disturbed. They live in large colonies and attack together. A Yellowjacket will make a hole in the ground and live there, just like ground-nesting honey bees. They are a severe threat to beekeepers as they can easily invade beehives and kill the colonies of bees inhabiting them. Let's discuss some common questions about honey bees and yellow jackets.

After reading all about honeybees and yellow jackets, do check out the comparison of cockroach vs waterbug and egret vs heron facts.

Did you know yellow jackets can sting multiple times without dying? Wasps are of different kinds, and both hornets and yellow jackets belong to them but differ in their appearance and behavior. Yellowjackets sport yellow and black markings and are smaller in size. The markings on the bodies of hornets contain yellow but not black. Instead, they have different shades of brown. However, they may not be identifiable if the brown is on the deeper side. They are larger than wasps and consume other insects, but unlike yellow jackets, they do not love sweet fruits or liquid and therefore hardly contact humans.

Hornets usually live in beehives, which they build on tree branches but yellow jackets dwell a hole in the ground. When it comes to stinging, hornets can cause more pain and can sting repeatedly, but you are more likely to be stung by a yellow jacket as, due to its feeding habits, it is generally in closer proximity to humans. Yellowjackets die after stinging because the stinger attaches itself to the skin, which is not the case in hornets. If threatened, hornets can be pretty aggressive, though not as much as yellow jackets. These insects are beneficial to some extent as they are flower pollinators and keep the population of other pests in check, thus protecting garden plants and flowers. Still, they should be driven away if you want to protect yourself and your family from the painful stings, which can cause burning for 1 - 2 hours, swelling, and redness, which can last up to three days.

Is yellow jacket, a wasp, or a hornet?

As discussed above, yellowjackets and hornets are types of wasps, and hornets are the largest group of wasps. However, the baldfaced hornet is an exception, which is a yellow jacket. It is called bald-faced because its white face and black body give it a bald man's appearance. It is considered a hornet because it is large and lives in hives above the ground and not in holes underground. Yellowjackets do not have a fuzzy body allowing them to collect pollen.

Yellowjackets have a more robust and better defense mechanism of their nests than other wasp species. A solitary guard protects the nest or hole opening and sends a message to the rest of the colony in case of danger. Between yellowjackets and hornets, jackets are more wicked because this insect does not need a reason to sting. Hornets, on the other hand, will not sting unless provoked. Yellowjackets perform a distinct side-to-side movement while flying and about to land, not seen in hornets. Paper wasps are another kind of wasps that look similar to yellowjackets with their yellow and black patterns but are more prominent than yellowjackets and slender at the waist region. These are two completely different species and should not be confused.

Did you know honeybees lose their stinger and die after they sting? Well, a large population of honeybees can surely tame a few yellowjackets, but the honeybees are at a greater risk of being killed. Swarms of yellow jackets are seen to destroy the hives of honeybees and eat the honeybees, wasps, larvae, nectar, honey, or anything else available. Other bees can often rob beehives that are weak in search of honey, and in the process, they leave dead bodies of the native honeybees and exposed quantities of honey everywhere, which helps in attracting yellow jackets.

During late summer, the population of the yellow jacket reaches its peak and becomes a severe concern for a beekeeper. This insect can locate beehives with the help of the smell of honey or other substances produced in bees' bodies. This pest species can destroy hundreds of colonies in minutes and make the beekeeper start all over again. This damage can be avoided in a few ways.

Strengthening the security of the hives and making sure there is no space for other insects to enter. Shortening the size of the entrances can help.

Locating and killing nearby yellow jacket colonies by pouring hot water into them.

Using molasses can help, as they stick to the bodies of yellowjackets and trap them inside the hives.

Yellowjackets are attracted to dead and rotting materials, hence maintaining a clean and fresh hive is vital for protecting the bees inside.

Some poison baits can be used to place poisoned flesh inside a beehive and wait for the yellow jackets to consume it and die.

What happens when a honeybee bites you vs a yellow jacket?

During autumn, the queen yellow jacket stops laying eggs, and there is no young jacket remaining. So, food production decreases, and by the end of winter, starvation becomes a problem. The lack of food makes these insects so angry and fierce, and their chances of stinging rise. Bees can starve too, but this pest species usually don't become too aggressive. They are peace-loving creatures and are helpful to us because they produce honey and wax and help in pollination.

Yellowjackets can sting anytime they want, even if you're walking by without bothering them. This pest species can sting multiple times and not die, unlike honey bees, which die as soon as they sting. This is because a part of their abdominal contents come out along with the stinger. The intensity of these stings by the two insects is not the same. A yellow jacket sting will be more painful than a honey bee's, given the number of times they attack, and can also be harder to treat. This is the main difference between the stings of these two insects. The yellow queen jacket makes a paper comb only once, after which they live inside holes made in the ground. This makes it easier for them to come out and attack. If yellow jackets ever sting you, make sure to wash the area first with soap and water. You can then use a cold pack to help lessen the pain and burning. Take any oral medicines or apply ointments to deal with the venom injected.

Why are honey bees black and yellow?

Honey bees are not the same as wasps. These fuzzy insects are similar in shape, but the yellow and black bands present in wasps are more distinct than honey bees. Bees are primarily present in gardens and nests where flowers are readily available. This pest species will build their hive close to the plants and other nectar-producing flowers. The fuzzy appearance of these insects enables them to collect pollen from the flowers they sit on and help a lot in pollination. This ambiguous characteristic is due to the number of hair present in their bodies.

Many believe that the bees' black and yellow color is present to protect them from predators like wasps which can take over their hives and kill them, but that is not true. Not all honey bees are yellow and black. Some may be orange or amber-colored. The stripes are standard, however. This is due to evolution. Earlier, more enormous insects and animals were aware of their threat only when stung, which cost the bees their lives. Thus, they figured out an ingenious way to alert their predators. They started developing stripes. The very sight of these stripes made the animals stay away from them, and thus, the bees' lives were saved.

Here at Kidadl, we have carefully created lots of interesting family-friendly facts for everyone to enjoy! If you liked our suggestions for Bee vs Yellow Jacket: Stinging Insects Differences Explained For Kids then why not take a look at Why Do Seasons Change? Fun Facts About Earth That Will Surprise You, or Accent Explained: Why Do Canadians Say 'Eh' & What Does It Mean?