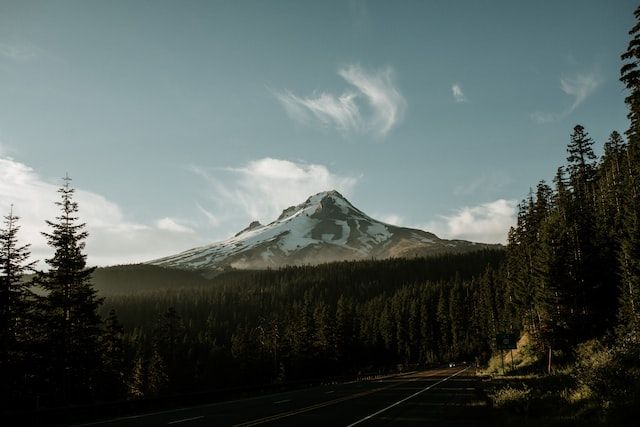 The mountain is listed as a dormant volcano. It also serves as the focal point of Mount Hood National Forest, a famous tourist and recreational area, extending along the Cascade Range from the Columbia River.

Today, geologists have stated that the volcano is probably active, but is mostly on the dormant side. There has been no account of major eruptions in the recent history of Mount Hood, with only minor volcanic activities recorded in 1907. Mount Hood is the only year-round skiing destination in the United States.

The first documented sighting of Mount Hood by Europeans was in 1792. The mountain was found by British naval officer, Lt. William Broughton who sailed on an expedition up the Columbia River in October 1792.

William Broughton first described the mountain and named it after Samuel Hood, a British admiral who never caught a glimpse of the mountain. The mountain was also seen in 1805-1806, by the Lewis and Clark Expedition.

Mount Hood overlooked the residing area of the natives, which was located mostly down the Columbia River and its branches, and in the Willamette Valley. Upper and Middle Chinookan bands and tribes, including the Molala and Cascades people, resided in the Cascade Range.

The Cascade Range has a south-north pathway that matches today's Pacific Crest Trail. The tribes survived by fishing and hunting around the mountain and harvesting edible plants, roots, and huckleberries. Plants such as beargrass, used in weaving baskets, were grown for the purpose.

The native people considered the mountain sacred. A myth from the Klickitat tribe states that Wyeast and Pahto, the two sons of the Great Spirit, often got interlocked in battles to win the love of a beautiful woman called Loowit.

The Great Spirit was outraged at his sons and turned them and Loowit into mountains; Wyeast is Mount Hood, Loowit is Mount St. Helens, and Pahto is Mount Adams.

The mountains and their surrounding lands were surrendered to the United States in 1855, under the Kalapuya Treaty and again in 1859, under a treaty with the tribes of Middle Oregon.

The south of Mount Hood is home to approximately 4,000 members of the Wasco, Paiute, and Warm Springs tribes.

Mount Hood has a rich ecosystem and is home to a wide variety of animal species, including coyotes, elk, black-tailed deer, mountain lions, yellow-bellied marmots, black bears, and many other species that are commonly found in the Northwest.

Mount Hood volcano is estimated to be about 50,000 years old. However, there have been no violent explosive eruptions in the recent past.

Mount Hood is one of the most active volcanoes located in the Cascade Range. Oregon's largest metropolis, Portland, is located just 70 mi (112 km) away from the volcano. It is also Oregon's tallest mountain at a height of 11,249 ft (3,428.6 m) above sea level.

The volcano is listed as a stratovolcano with the potential to erupt in the future. It is situated in the Pacific Northwest region of the United States and was formed on the Pacific coast by a subduction zone.

Mount Hood volcano is made mostly of dacite and andesite, and its formation began during volcanic eruptions between 500,000 to 700,000 years ago. Over the following millennia, eruptions contributed to the shaping and rising of the mountain.

It is believed that, at its highest, Mount Hood had an elevation of more than 12,000 ft (3,657.6 m), with erosion and ice reducing the height of the peak to its modern-day height.

Some of the natural features of the volcano include Cathedral Ridge, Illumination Rock, Yocum Ridge, Mississippi Head, Cooper Spur, and McNeil Point.

The eruptions of Mount Hood are considered less powerful compared to the slow formation and spill of pyroclastic flows, lahars (volcanic mudflows), and lava domes.

The most recent significant eruption is estimated to have ensued in the 1780s, and the eruption deposited a massive lahar at the surface of Sandy River. This deposit caused the creation of Crater Rock, a 550 ft (167.6 m) lava dome.

Even though the mountain has not erupted since the 1780s, the vents in its upper regions, known as fumaroles, still eject sulfurous steam. Minor earthquakes are a frequent occurrence beneath Mount Hood.

There are over 11 named snowfields or glaciers in Mount Hood. The names of these 11 glaciers are Coalman, White River, Newton Clark, Eliot, Langille, Coe, Ladd, Glisan, Sandy, Reid, and Zigzag. The 12th glacier was named Salmon Glacier in 1924, before it was renamed Palmer Glacier.

The Palmer Glacier is the most visited, as it lies partially within the ski area of the Timberline Lodge and is the most prominent climbing route.

The glaciers on the summit of Mount Hood are the source of five significant rivers; White, Hood, Sandy, Zigzag, and Salmon. A million-acre forest is the centerpiece of Mount Hood National Forest and sees around 4 million tourists each year.

The Mazamas, a Portland-based mountaineering club, was founded in 1894, on Mount Hood. The mountain became a major tourist attraction in the 20th century for hikers and climbers. In 1915, a fire lookout cabin was built on the mountain and rangers installed lines on the upper portions of the main routes to assist climbers.

Most climbers take the South Side route even though there are various other routes, including Center Drip, Cooper Spur, and Yocum Ridge. The Black Spider route can be found on the northeast of the mountain.

Mount Hood is one of the most visited climbing spots in the United States. The Forest Service believes that the mountain sees around 10,000 climbers each year. Since the mountain has glaciers and snowfields at 7,000 ft (2133.6 m) and above, the top is a winter wonderland for most of the year.

There are many naturally forming ice caves at the top, with many wonders still waiting to be discovered to this day.

The southern side is believed to be the easiest climb. If you are planning on climbing the mountain, you should keep good technical gear to hand, as there are many challenging loose rocks, stretches, and crevasses.

April to late June is considered to be the best time to climb Mount Hood. However, even during the peak season, climbers are advised to be prepared for the worst, as the weather at the summit can change in an instant.

Timberline Lodge is the favorite starting route, which takes you to Crater Rock. From Crater Rock, you can climb your way to Coalman Glacier, after which you reach Hogsback, before racing the final hurdle to Pearly Gates, located at the summit.

The unique geography of Mount Hood provides thrill-seekers with the best opportunity to explore the region through hiking. The Timberline Trail is one of the most popular hiking trails on Mount Hood.

The Timberline Trail was created in the '30s, by an organization known as the Civilian Conservation Corps. The group allowed tourists to experience the beauty and calm serenity of the mountain.

The Pacific Crest Trail is an alternative to the Timberline Trail and is a haven for people seeking some horseback riding and long-distance hiking. The trail begins at Mount Hood and travels south to the border of Mexico.

The high elevation of the snowy regions gives the resorts, especially Timberline, the record for the longest ski season in the United States. Olympic snowboard and ski teams from all over the world train at the Timberline ski area.

The three most recent eruptions of Mount Hood took place around 1,800 years ago. The volcano erupted from the high-elevation vents on the volcano's southwest flank and dumped the remains to the west and south.

Timberline Lodge is situated on the southern flank of Mount Hood, just beneath Palmer glacier, and is a National Historic Landmark. The lodge is situated at an elevation of around 6,000 ft (1828.8 m).

What is Mount Hood known for?

Mount Hood is famous for being the highest point in Oregon and the fourth-highest in the Cascade Range.

How did Mount Hood get its name?

How many times did Mount Hood erupt?

In recent history, Mount Hood has erupted twice, once 1,500 years ago, and the other 200 years ago.

Mount Hood was discovered on October 29, 1792, by William E. Broughton and his team.

How active is Mount Hood?

Mount Hood is considered to be a potentially active stratovolcano.

Does Mount Hood always have snow?

Mount Hood receives an abundance of snow, which remains into the summer months.

How old is Mount Hood?

What kind of animals are on Mount Hood?

Various species, such as cougars, northern spotted owls, and wolves, can be found on the mountain.

What is Mount Hood's real name?

Mount Hood was given the name Wy'east by the local Native Americans.

Are there earthquakes associated with Mount Hood?