Frog Anatomy & Physiology: Learn About All Parts Of The Frog 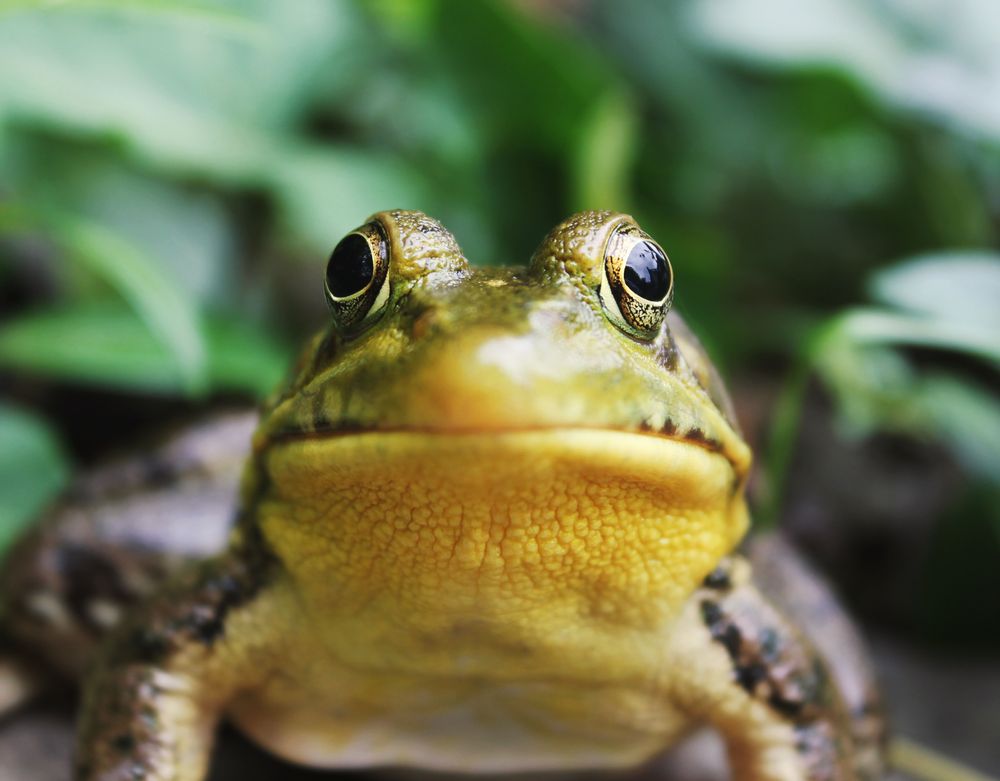 Frogs comprise an extensive group of tailless amphibians of the phylum Chordata and order Anura.

The evolutionary history of frogs indicates that these slimy creatures originated more than 200 million years ago, making them as old as the dinosaurs. With thousands of species distributed worldwide, frogs are one of the most interesting amphibians in the living world.

Frogs generally have protruding eyes and webbed hind feet adapted for leaping and swimming. What's more interesting, when frogs swallow food, their bulging eyes push against the roof of their mouth to help shove the food down their throat! In addition, a frog has excellent night vision, and most species have well-developed vocal sacs to amplify the typical croaking call that can sometimes be heard from miles away. A frog's body is typically smooth-skinned, distinguishing them from the warty and dry-skinned toads. Also, the frog's skin is supplied with blood capillaries and is permeable to oxygen and carbon dioxide, making it possible for the animal to breathe underwater.

There's more to know about the frog. Read on for details about its anatomy and physiology.

If you find this article interesting, why not explore more about the frog head and frog skin?

Internal Anatomy Of A Frog

The body cavity of a frog accommodates different organ systems such as circulatory, digestive, excretory, respiratory, nervous, and reproductive. Each organ system has well-developed structures and designated functions. A detailed study of the internal organs of a frog is what anatomy is all about.

The circulatory system of the frog consists of a three-chambered heart, blood, blood vessels, and the spleen. The frog's heart has two upper chambers (atria) and one lower chamber known as the ventricle. The right atrium receives oxygen-poor blood from the body, and the left receives oxygen-laden blood from the lungs. The single ventricle pumps blood to the body and lungs. Like humans, the frog heart has a membranous covering called the pericardium. Arteries and veins are vessels that carry blood from and to the heart, respectively. In addition, special venous connections are present between the liver and intestine (hepatic portal system) and the kidney and lower body parts (renal portal system). The spleen, located within the mesentery between the large intestine and stomach, stores and recycles old red blood cells.

The digestive system organs include the stomach, esophagus, intestines, liver, pancreas, gall bladder, and cloaca. The frog's mouth is equipped with fine maxillary teeth and two vomerine teeth on the upper jaw. Both the maxillary teeth and vomerine teeth are used for holding prey. The tip of the frog's tongue is folded back towards the throat and can be flicked out rapidly to catch prey. The sticky tongue further aids in holding prey. Digestion begins in the frog's mouth, and the food passes to the stomach via the esophagus. After digestive enzymes in the stomach partially churn up the food, it passes into the small intestine. Like in humans, the frog's pancreas secretes pancreatic juice, and the liver secretes bile. The liver is the frog's largest organ. A sac called the gall bladder stores bile secreted by the liver. After digestion and nutrient absorption in the small intestine, the undigested food matter passes into the large intestine and accumulates in the cloaca for excretion as solid wastes. A frog also has a pair of kidneys, ureters, and a urinary bladder to excrete the nitrogenous waste through the cloaca.

The soft and moist skin of the frog is not only protective but also helps in respiration. The skin is richly supplied with blood capillaries and permeates water, oxygen, and carbon dioxide. When frogs live underwater, the skin is solely responsible for the animal's respiratory needs. Other breathing organs include a pair of saclike lungs, a windpipe, and two nostrils. With the mouth closed and its floor lowered, the frog's throat puffs out. The air enters through the nostrils and fills the enlarged mouth. Subsequently, with the nostrils closed, the floor of the mouth contracts, and the air in the mouth is forced down through the windpipe and into the lungs. Alternatively, a frog may also be breathing with its mouth open, letting air enter its lungs via the windpipe.

Frogs have an equally well-developed nervous system comprising the brain, spinal cord, and nerves. Like humans, a frog's brain is divided into the cerebrum, cerebellum, and medulla oblongata. In addition, ten cranial nerves originate from the brain, and ten spinal nerves arise from the spinal cord. The nostrils are two simple holes, and the bulging eyes have poorly-developed eyelids. A nictitating membrane or third eyelid is attached to the bottom of each eye. Frogs do not have an external ear, resulting in exposed eardrums. The middle ear has only one bone, and the semicircular canals in the inner ear maintain body balance.

In male frogs, the testes (reproductive organs) are attached to the kidneys. After passing through the kidneys and ureters, male adult frogs eventually release their sperms via cloaca. Likewise, the female frogs have their ovaries located beside the kidneys. From the ovaries, the eggs travel down a pair of oviducts and are released outside through the cloaca of the frog.

External Anatomy Of A Frog

The external frog anatomy includes both the dorsal and ventral sides of the animal and describes the organs and body features visible on the outside.

Frogs have a stout body divided into the head and trunk. A frog's head has a pair of large bulging eyes and a pair of nostrils located just above the mouth. Eardrums or tympanic membranes are located behind the eye on either side. The skin is typically smooth and moist, with variations in texture and color across species. A frog is devoid of a tail, except during the larval stage. In addition, frogs have two front legs and two powerful legs in the rear. While each front leg has four toes, the hind legs have five toes with webbing in between. The webbed toes primarily help in swimming and gliding. Male frogs can be distinguished from their female counterparts by the presence of vocal sacs and a copulatory pad attached to the first digit of the front limbs. Frogs can be pretty diverse in terms of size. They can be as small as 0.3 in (7.7 mm) in length, such as the Paedophryne amauensis from Papua New Guinea or large enough like the African goliath frogs that measure about 13 in (33 cm) in length and weigh up to 7.2 lb (3.3 kg).

What are frog bones made of?

The skeletal system of frogs consists of both cartilaginous and bony structures. As in most other animals, a frog's skeleton provides support to the body, offers a surface for attachment of muscles, and protects internal organs.

The backbone of frogs is made up of 10 vertebrae. The first vertebra is called the atlas and is attached to the skull. Following the atlas are seven vertebrae in the abdominal region and a sacral vertebra in the pelvic area, forming the sacrum and joining the ileum. The last vertebra is called urostyle, a spikelike bone reminiscent of a primitive tail. The forelimbs of the frog consist of two bones, humerus and radioulna, with several carpals, metacarpals, and phalanges in the hands. In addition, a number of bones forming the pectoral girdle support the forelimbs. Likewise, the hindlimbs of frogs have two bones, the femur or thighbone, and the tibiofibula or shinbone. The hindlimbs are highly-specialized for leaping and are supplied with two elongated anklebones known as the calcaneus and the astragalus.

Frog dissection is the best way to study the internal anatomy of the amphibian and see how each of its organs fits inside its body.

Place the frog in a dissecting tray with its ventral side up.

Move the abdominal muscles away from the body cavity using a scissor and cut along the body's midline up to the level of forelimbs.

Make horizontal cuts near the legs and arms.

Lift the muscle flaps and pin them back.

Yellow, finger-shaped structures called fat bodies may be present on the inside of the abdominal wall. Also, female specimens may have eggs filling the body cavity. Remove the fat bodies and eggs since they obscure other organs.

A web-like membrane called the peritoneum covers most of the organs.

The largest structure in the body cavity is the brownish liver with three lobes.

A triangle-shaped heart is located at the top of the liver.

A pair of spongy lungs are placed on either side of the heart.

The gall bladder that stores bile is a small, greenish-brown sac under the liver, visible upon lifting the lobes.

The stomach is a curved structure below the liver. The stomach connects to the small intestine, straight at the beginning, with subsequent coiled sections held in place by a membrane called the mesentery. The pancreas, if intact, is present between the stomach and small intestine.

The esophagus starts from the mouth and leads to the stomach.

Under the small intestine is the dark red spleen attached to the mesentery.

The end of the small intestine meets the shorter and broader large intestine, which eventually ends at the cloaca.

The kidneys are flat and oval-shaped, located on the back wall of the body cavity.

Male specimens will have bean-shaped testes attached to the kidneys. In female specimens, the ovaries and coiled oviducts will be beneath the stomach and intestines.

Here at Kidadl, we have carefully created lots of interesting family-friendly facts for everyone to enjoy! If you liked our suggestions for frog anatomy then why not take a look at how do frogs mate, or poison dart frog facts.