How Do Dolphins Communicate? Can They Understand Humans | Kidadl

How Do Dolphins Communicate? Can They Understand Humans 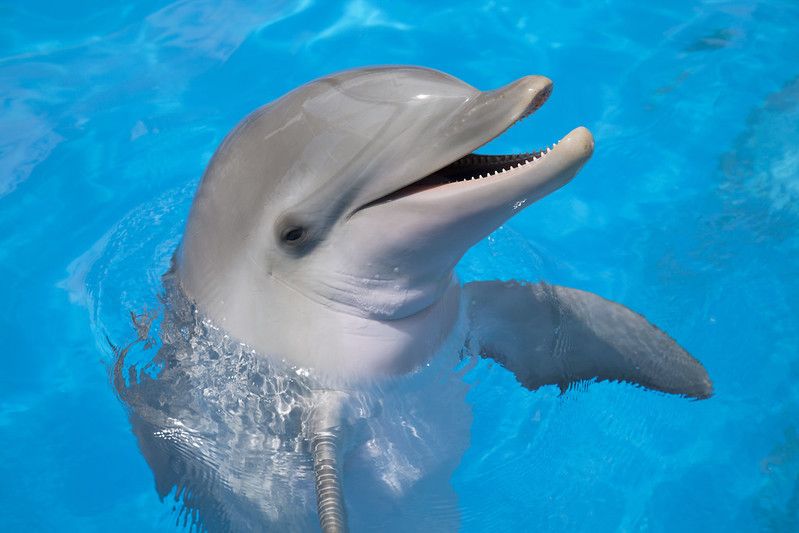 Dolphins are mammals of the marine world that are known to have the most physical contact with humans.

These animals are extremely intelligent and have the ability to communicate either with the help of body language or by whistling. They are related to whales like the pilot whale and the orca whale.

Dolphins and whales are amazing species of the ocean with several ways to communicate. They communicate by sound waves or signature whistles through their body or with the help of ocean waves are a few of the techniques of communication used by these species. Being one of the most intelligent marine mammals in the world, dolphin communication is not restricted to the world beneath the ocean. Dolphins are naturally playful and can communicate by ultrasound as well.

Dolphin species, like the bottlenose dolphins, have similar ways of communicating with one another. This method of communication is called CHAT (cetacean hearing and telemetry) to bridge the distance between dolphins like the bottlenose dolphin and humans. Apart from whistles, they can produce clicks as well, which are called burst pulses. Sound can travel at least four or five times faster in the sea or ocean water compared to air, which is why dolphins and other marine mammals use noise and sounds to communicate.

If you like reading this, find out more interesting facts about how do amphibians breathe? And how do animals hibernate?

Different Ways Of Communication by Dolphins

Scientists suggest that there are different ways by which dolphins communicate with each other and with humans. Dolphins may communicate either through their signature whistles or clicks and by echolocation.

Unlike other marine mammals, they can use their body in order to generate body language and are capable of communicating through physical contact when it comes to communicating with humans or other dolphins. Dolphins are known to have a vast range when it comes to their unique dolphin communication method. Research studies have suggested that dolphins and whales utilize sonar, which is called echolocation, to communicate as well as to locate and hunt their prey in the surrounding area. Echolocation is also used to determine the location of predators and communicate with others about predators nearby. Echolocation is the use of sound waves and sound-based frequencies that the dolphins produce. When dolphins swim, they produce a chain of whistles and clicks. The species is found to be extremely vocal. Dolphins and whales, when traveling in a group, communicate with the members by emitting sounds. The sounds emitted by the dolphins and the whales are different from one another, which is used to differentiate the species and individuals present in the pod.

Apart from echolocation and producing sounds and whistles, these species use their body parts like the tail and the flipper to express themselves. For example, the animal is observed to slap the tail on the water and suddenly pop out of the water as well as collide with each other. According to research, these are all signs of the language of communication. At times, they are noticed to keep their head above water level, mostly to identify any complex creatures or predators in that location. This amazing animal communicates with the other dolphins by physical touch. Aggressive interaction through the collision of the head shows fighting for the mother dolphin during the breeding period, whereas soft interaction signifies admiration.

Dolphins communicate underwater mostly to hunt their prey or to identify unwanted objects or predators around them. For example, a bottlenose dolphin uses a range of ultrasound waves, echolocation, and signature whistle beneath the water level to communicate with the other members of the species.

Dolphins use this amazing technique called echolocation to locate other objects around them with the help of frequencies. Echolocation is capable of identifying the shape and direction of the object. This method helps them to identify any foreign objects, locate food near the pods, and swim away from the predators. A dolphin also has a habit of jumping out of water. This is mostly done by the young dolphins in order to save energy as swimming through the air is easier than swimming through water. Dolphins and whales use their tail and the flipper very affectively, to propel themselves fast, deep, or to the water’s surface. A continuous flap with the tail indicates life danger or a call for other dolphins to play. Otherwise, dolphins use the tail and the flipper as a mating call or when they are looking for food. Considering underwater communication, dolphins and whales whistle and swim towards other animals to connect as well.

The dolphin is an intelligent and amazing species of the underwater world, communicating mostly by generating sound. They have a few specific techniques in order to produce the ultrasound waves to serve their individual purposes.

In the case of a dolphin, communication sounds are mostly generated by the nasal air sacs. Here, air sacs are present below the blowhole. This is related to the balloon filling theory and putting pressure at the end to permit the air to leave, which creates noise. Similarly, while breathing, the air passes through the sac where a nasal plug is present. When the air is supposed to leave, it creates noises like a whistle or click. The blowhole is also controlled by the muscles of the dolphin, which can produce different kinds of sounds and noises. The alteration in the sounds occurs by altering the size of the hole of the blowhole.

Research suggests a dolphin is mostly likely to generate so many different kinds of sounds to grab the attention of humans in order to connect or communicate with them. This method helps a dolphin or a whale to come near the humans and enjoy quite a lot of attention from them. An alternative theory suggests that the emission of sound can also happen when the sacs act as a mirror. There are fatty tissues that are spotted near the blowhole of a dolphin, which can cause the sacs to act as an acoustical mirror. There are observations that the tissues collide with each other, and the air is suspended into the water, creating a noise. It has also been suggested that few fatty tissues are supposedly present near the jaw of the dolphin, which is responsible for collecting and carrying specific noises. The tissues carry the sounds to the ears and from the ears to the air.

Language Used By Dolphins To Communicate

A dolphin is known to communicate with the help of the generation of sound. Scientists suggest that these sounds might be a form of language for them to learn and adapt.

Throughout its life, a dolphin is noticed to utilize not one but a range of noise and clicks. These sounds, whistles, or noises can be an expression that is conveyed by these wild sea species to other species or to humans to serve their desires or wants. However, this fact has not been scientifically confirmed yet due to a lack of proper information and observation. In order to find out more evidence, surrounding CHAT (cetacean hearing and telemetry), few researchers have studied this fascinating language, to decode any rhythm observed in the sounds of the dolphins or the whales.

With regards to this, few scientists were seen to visit and interact with dolphins to understand and learn the musical rhythm of the dolphin. Despite the research, anything similar to the use of a language has not been detected but is presumed by the scientist. Currently, there is no concrete answer related to whether a particular language is used by dolphins to communicate or not.

Here at Kidadl, we have carefully created lots of interesting family-friendly facts for everyone to enjoy! If you liked our suggestions for how do dolphins communicate? Then why not take a look at how do birds find worms, or how do dolphins sleep?