Interesting Wagon Train Facts For The History Buff In You! 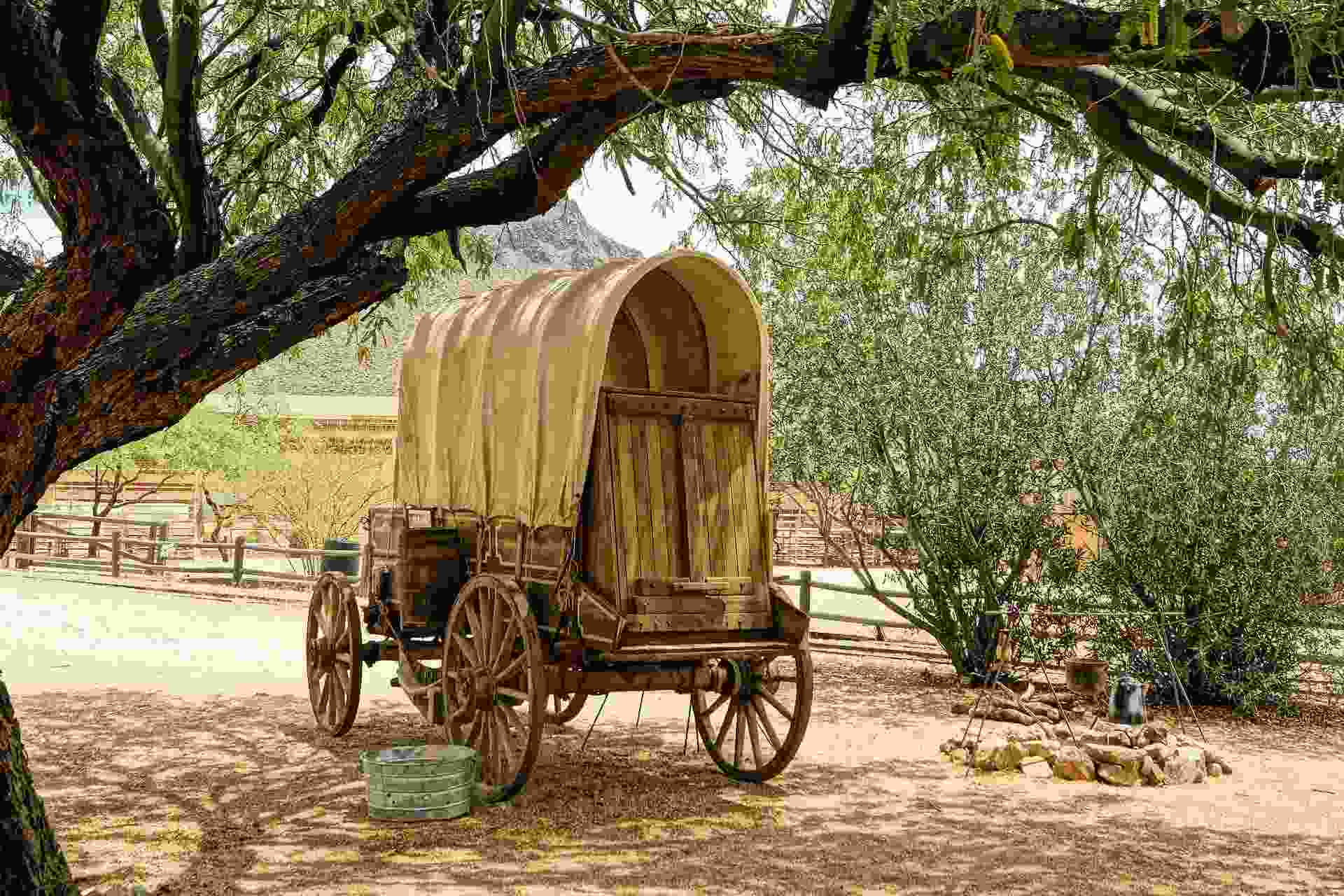 A wagon train is a set of wagons (or similar vehicles) towed by oxen, horses, or mules to establish an overland route.

Such wagons followed a well-worn path that had been used by previous groups of travelers, and are thus known as 'prairie schooners.' Caravans are simply one type of wagon.

Wagon trains can cover trails that are miles long. Read on to know more.

Before 1880, Trans-Mississippi West traders and emigrants grouped their wagons into loosely organized caravans for security and efficiency.

Between April 10 and July 16, 1830, William L. Sublette, a partner in the reconstituted Rocky Mountains Fur Company, led a ten-wagon, mule-drawn train over the Oregon Trail from St. Louis, Missouri, to the company's Wind River rendezvous (in present-day Wyoming), returning to St. Louis on October 10. Captain Benjamin L. E. Bonneville is typically credited with taking wagons over the South Pass in July 1832.

In 1842, settlers arrived in Elm Grove. Officers began the arduous journey westward over the Oregon Trail.

In the same year, Dr. Elijah White's caravan made it as far as Fort Hall (in present-day Idaho) before the wagons were abandoned.

In 1843, nearly a thousand immigrants traveled the same path in numerous wagons, some of which made it to the banks of the Columbia River.

On June 23, 1849, one report stated that 5,516 wagons had passed through Fort Kearney along the Platte River (in present-day Nebraska) to California or the Columbia Valley.

At night, the wagons were usually arranged in a circle or a square, end to end, to form a corral for the mules and cattle, and to serve as a fortress for the passengers.

Life in the wagon camps was dangerous due to thievery, storms, and animal stampedes. Horse-drawn or mule-drawn covered wagons could travel 10-15 mi (16-24 km) each day.

Even after the Union Pacific-Central Pacific tramontane railway line was completed in May 1869, caravan trade and travel continued for a decade.

The establishment of stagecoach lines, military defeats, the relocation of indigenous communities, hunting buffalo herds, and the construction of other far-western railways in the 1800s contributed to the wagon becoming more popular as a means of transpoting heavy goods rather than passengers.

Poorer emigrant families found it safer to go west in a single covered wagon instead of using different means of transport.

The Oregon Trail was a famous trail that was discovered in the 19th century. The basic structure and organization of the wagon train as we know it came to be defined by this transit westward from the Oregon-California trail.

Fort Laramie was known as 'camp sacrifice,' and was an Oregon-based trail.

The Donner Party tried to forge a new trail from the Sierra mountains to California.

The Conestoga wagon was a heavy covered wagon that was popular in the eastern United States and Canada during the late 18th and early 19th centuries. Other types of wagons included an open wagon, covered wagon, tank wagon, flat wagon, and hopper wagon.

When wagons at rest were grouped tightly, they provided the benefit of protection. They shielded against criminal gangs and wild draft animals. Also, protection against wild animals was important. The wagon train gave pioneers the benefit of strength in numbers as well as a mobile 'fort' capacity.

A wagon is a railroad component. It is a towed vehicle that travels along a railway track. Unlike an automobile, which is used to carry people, a wagon conveys cargo.

In the 1800s, large trails of wagons transported goods, supplies, and settlers across the United States. People traveled together so they had a large support group in case they were attacked by indigenous tribes or by other settlers.

A wagon train typically consisted of over 200 wagons pulled by oxen, mules, donkeys, or camels. These wagons were all loaded with food, tools, and supplies, including anything from furniture to a house.

Many people would also bring their livestock with them, as these animals were easier to transport out west than they were to breed out west.

By using wagons in a long line, the settlers would travel farther and faster than if they had been walking or riding mules.

The famous trail of the 19th century that was often used by wagons was the Oregon Trail, and the trail was quite dangerous. The Oregon Trail ran over 2,100 mi (3,380 km) from Missouri to the Pacific Ocean and the Oregon coast.

How many wagons were usually in a wagon train?

A hundred wagons were usually in the train.

How long did wagon trains take to make a journey?

How long did wagon trains last?

Who led the first wagon train to Texas?

How did pioneers fix a broken wagon wheel?

Blocks were used to support the wagon's axle so that it did not fall over.

How much did a covered wagon cost?

Covered wagons cost as much as $1000 for a family of four.

The Oregon Trail convoy consisted of 120 wagons, 1,000 humans, and thousands of cattle. Their journey started on May 22 and lasted five months. It sparked a flood of pioneer migrations along the Oregon Trail, known as the Great Emigration of 1843.

Why did wagon trains form a circle overnight?

At night, these automobiles were frequently arranged into a circle or square to provide cover from the wind or weather, to protect the cattle in the center, to prevent their escape, and to deter cattle theft.

What did the pioneers eat on the wagon trains?

How many miles a day did a wagon train travel?

As people traveled through harsh and unfamiliar terrain, a well-stocked wagon could mean the difference between life and death. An average journey lasted four to six months, and the carts had to carry enough food for the entire family.