Lapis Lazuli Facts: Here's All You Need To Know About This Blue Stone! | Kidadl

Lapis Lazuli Facts: Here's All You Need To Know About This Blue Stone! 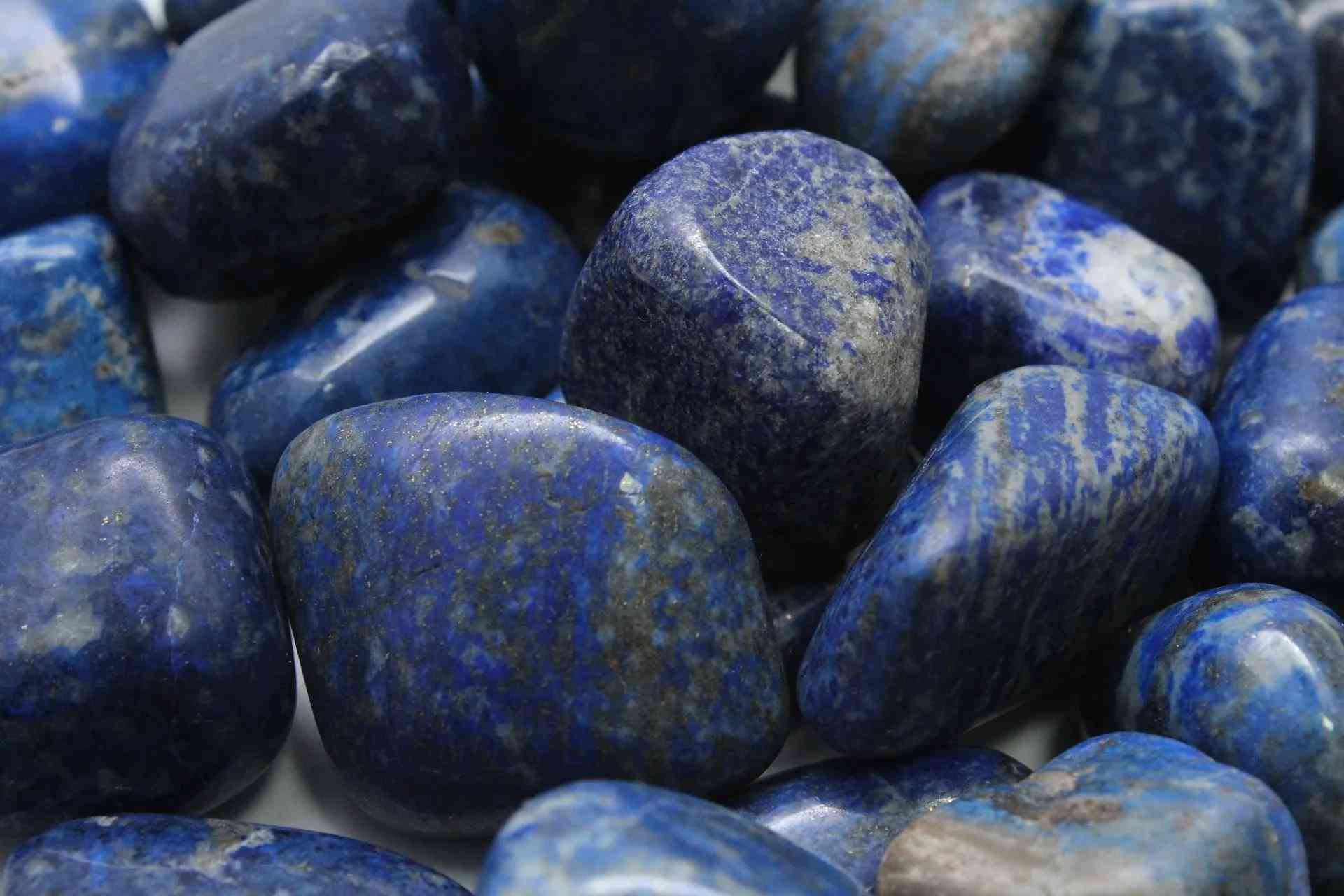 Lapis lazuli is a metamorphic rock, used majorly as the semiprecious stone for its vibrant blue hue.

It is mined from crystallized chunks of Lazurite and used in jewelry and to create pigments. Lapis lazuli, with its deep blue body and scattered specks of golden pyrite over its surface, looks like a starry night sky.

The name lapis lazuli has its origin in Latin and Persian. The Latin word lapis signifies 'stone' and the word 'lazuli' originates from the Persian word lazhuward which means 'blue'. For thousands of years, it has not only been valued as a gemstone but also used as ornamental and sculpting material. In the middle ages, this stone was called sapphire and was considered the stone of the Virgin Mary in the early Christian tradition. Scholars agree that the mention of sapphire in the 'Old Testament' actually refers to lapis lazuli. In one of the oldest pieces of literature, the 'Epic of Gilgamesh', written in the 17th–18th century, this gemstone is mentioned many times. Pliny the Elder has mentioned lapis lazuli as being "opaque and sprinkled with specks of gold". This rock was a symbol of success in the old Jewish tradition.

If you liked reading about this, then why not also read facts about sedimentary rocks and carbon facts

What are the different types of Lapis Lazuli?

Lapis lazuli is generally opaque or semi-translucent in texture. This blue stone is sometimes slightly violetish in color but the blue hue is mostly predominant. It has specks of golden pyrite and white calcite present all over, creating a dimensional contrast. Gemstones like jaspers, chalcedony, or low-quality lapis along with calcite and limestones are often dyed with Prussian blue or ferric-ferrocyanide and falsely sold under the trade names of 'Swiss lapis' and 'German lapis'. The artificial versions of lapis lazuli are more opaque with a gray undertone to them. The high-quality stones, however, have an ultramarine color with a depth to them.

Persian Lapis: This gemstone is the finest among all lapis lazuli. It has an even, dark, violetish blue hue with little to no pyrite flecks or calcite veining. The color is very intense which makes the stone pretty difficult to acquire. This variety of gemstones is originally from Afghanistan.

Russian or Siberian Lapis: This type of stone is of decent quality. The intensity of the base blue color varies in different stones and it has golden pyrite present in it.

Chilean Lapis: This is considered the least valuable variety of lapis lazuli. It has calcium veining scattered all over along with green spots.

When it comes to commercial availability and quality, this gem is divided into three subtypes: first quality, second quality, and third quality.

The first quality lapis have intense, even, deep violetish blue color with excellent polishing. They have no calcite veining or pyrite flecks.

The second quality lapis is also free of pyrite or calcite but they vary in color. These stones are of deep blue color with good quality polishing.

The third quality lapis have evenly distributed small pyrites over the surface. They are violet-blue or pure blue in color and well polished.

The high concentration of white calcite present in lapis lazuli gives it a pale blue color and it is referred to as denim lapis. Even though lapis lazuli is not a pricey gemstone, the finest quality beads are rare.

Distinct layers of white calcite envelop the gem making it the host rock.

There is about 25%-60% lazurite present in this gem which is the most important mineral. It is a feldspathoid tectosilicate mineral belonging to the sodalite group. It has sulfate, sulfur, and chloride in it. The formula of lazurite thus is (Na,Ca) 8[(S,Cl,SO 4,OH) 2|(Al 6Si 6O 24)].

Even though well-developed crystals are scarce, contact metamorphism or hydrothermal metamorphism helps Lazurite to form bulk crystalline marble that creates the gemstone, making it a metamorphic rock. Trisulfur radical anion (S3-), present in the crystal is responsible for the bright hue of the stone.

It has a wax-like or vitreous luster with a semi-translucent to opaque look along with a medium to the dark tone and high saturation of pigment.

Lapis is adequately tough depending on the mineral mix it contains and its hardness ranges from five to six on the Mohs scale.

This stone comes in various shades of the color blue, like deep violetish indigo, royal blue, light blue, and turquoise which is determined by the combination of minerals present in it.

The higher qualities have no calcite but can have golden flecks while the lower quality stone is greenish and white-streaked. The presence of too much pyrite makes the lapis lazuli green and dull.

Where is Lapis Lazuli found?

In northeastern Afghanistan, the Sar-e-Sang mine, located in the Kokcha River valley of Badakhshan province, has been the paramount source of lapis lazuli for the last 6000 years. Deposits of this blue gem are found in the limestones of this mine. This stone is also extracted from Russia's Tultui Lazurite deposit, the Andes in Chile, and near Lake Harbour in the Baffin Island of Canada. It is also found in the United States in California and Colorado, India, Burma, Pakistan, Argentina, Italy, and Angola. From the ancient Egyptians and Mesopotamians to the Romans and Greeks, Afghanistan was the main source of lapis lazuli for all.

Since the Neolithic age, in Afghanistan, lapis lazuli has been mined. During the seventh millennium BC, this gemstone was shipped to South Asia and the Mediterranean. The Harappan settlement of the Indus Valley civilization in 2000 BC was founded close to the lapis mines of Shortugai.

At the fourth millennium BC settlement in Northern Mesopotamia, these solid blue gemstones have been discovered.

Also at the third millennium, BC Bronze Age site of Shahr-e Sukhteh in southeast Iran traces of lapis beads have been found.

In the third Millennium BC royal tombs of the Sumerian city-state, lapis adorned bowls, beads, and jewelry like amulets were uncovered where patterns like eyebrows and beards were delineated with these gems. A dagger with a lapis embedded handle was also found here.

The Babylonians, Akkadians, and Assyrians of ancient Mesopotamia used this azure stone for jewelry and seals. They also sold these beads to the Egyptians.

A third millennium BC statue named, The Statue of Ebih-Il, with lapis inlaid irises, was discovered in Syria which once was the ancient city of Mari.

During the excavations of the 300-3100 BC Predynastic Egyptian site Naqada lapis adorned jewelry like amulets were found. It was one of the favorite gemstones of the ancient Egyptians. Queen Cleopatra is famous to date for her iconic royal blue eyeshadow which was nothing but ground lapis lazuli.

Usage of this gem has been noticed in the ancient civilizations of Mycenae.

Lazurite had been unearthed primarily using the "fire-set" method from 1880 to early 1900 where a fire was used to raise the temperature of the rock, briefly followed by the application of cool water which caused the rocks to break. The stone inside was then extracted. Later the hydraulic suction system was introduced.

Lapis Lazuli has been an important gem for many, if not all ancient civilizations. It has been majorly used in jewelry and for producing turquoise and deep blue colors, used as an expensive pigment. Before the ancient Romans started using blue sapphires, lapis lazuli was the most used blue gemstone during ancient times. Lapis lazuli today is used as jewelry as it is easy to maintain. It can be cleaned simply with cold water and soft clothes which makes it popular for daily usage. Apart from that, this stone is also very popular in the medical and spiritual fields.

Here at Kidadl, we have carefully created lots of interesting family-friendly facts for everyone to enjoy! If you liked our suggestions for Lapis Lazuli facts: here's all you need to know about this blue stone, then why not take a look at mesmerizing sunset facts revealed to make most of the golden hour or explore these well water facts to learn more about ground water?