42 Marvelous Magic Facts Which Every Kid Wants To Know | Kidadl

42 Marvelous Magic Facts Which Every Kid Wants To Know 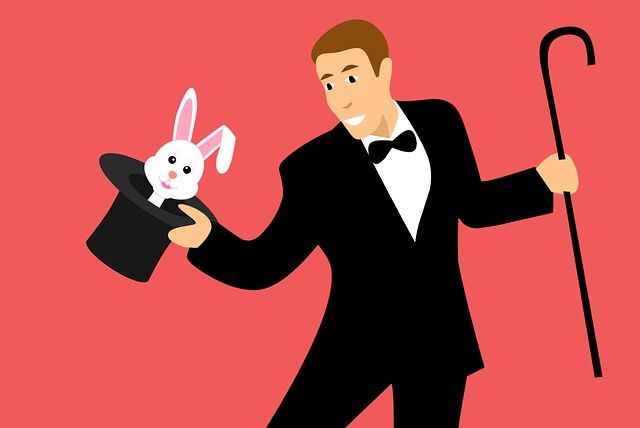 When you hear the words 'Hocus Pocus' or 'Abracadabra', you know that you're about to witness a magic trick.

The earliest magicians were seen as sorcerers who were believed to have supernatural powers. Some of the most popular magic tricks that amaze people up to date are card tricks, disappearing beauties, pulling a bunny out of a hat, and sawing a person in half.

As magic relates to something supernatural, the term for modern artists is illusionists, since they acknowledge their performances are skillful deceptions only. This performing art takes us into a fictional world of wonder where every act is an amusing and nail-biting experience.

These days, anyone who's interested to discover the secret behind how to perform a magic trick can either research it online or read magic books. Interestingly, Harry Houdini was the president of the oldest magic organization, the Society of American Magicians, for two years.

There are a few well-defined types of magic.

Ceremonial magic, also called ritual or high magic, majorly depends on theoretical learning, as it requires precise, complicated rituals, and a complex set of correspondences. This is meant to have a more spiritual purpose than a practical one.

White magic that derives from the Almighty is practiced by pagans and witches. This follows the positive path of nature, avoiding malicious intent, and is used for selfless or helpful purposes.

Black magic derives from the Devil and its practice falls into one of two types; Satanic witchcraft or Luciferianism. Black magic's purpose focuses on inflicting harm through malevolent deeds.

A school of magic is a group of spells that work in similar ways.

Abjurations are protective spells used for creating physical or magical barriers or negating them, harming trespassers, or banishing a subject to a different existential plane.

Conjuration spells have five sub-schools; summoning to bring a creature or object to you, from another existential plane to yours, healing, teleportation, and creation.

Enchantment spells work by affecting other people's minds, with behavioral influence or control.

Evocation spells work by creating something out of nothing. They produce a desired effect by manipulating energy or tapping an invisible power source.

Illusion spells mislead other people's minds, causing them to see things that aren't there, or the other way around, hearing phantom noises, or remembering events that never occurred.

Transmutation spells alter the characteristics of creatures, things, or conditions.

Necromancy spells manipulate the power of death and the force of life, and can raise the dead.

Famous Magicians In The World

The typical magician appearance, of a tall hat and cape, was popularized by Alexander Hermann, or Hermann the Great, a French magician.

The famous trick of pulling a rabbit from a hat was created by a British magician to exploit the public's interest in a woman who claimed to have given birth to a litter of rabbits. Most people associate magicians with this stereotypical trick.

The most well-known magician of all time is Harry Houdini, who made famous the act of escaping from ropes, chains, and other obstacles. Having started as a card performer, he realized he didn't fare well in it. This led to him becoming an escape artist, which he found he exceled at.

Harry Houdini died on Halloween due to Periodontitis. However, a punch from an audience member a few days before could have complicated his health as well.

Baron Wolfgang von Kempelen was one of the most famous illusionists. He devised an automated chess player in 1770 that took on all challengers. Benjamin Franklin is known to have played against the machine in 1783 and lost.

David Copperfield (an adopted stage name from the Charles Dickens novel), with his graceful and diverse illusions of card tricks to the classic trick of sawing women in half, made him the world's most financially successful magician.

Copperfield has his name in a dozen Guinness World Records and has 21 Emmys for his television specials. He earned over four billion dollars, more than any other solo entertainer.

His notable tricks are the ones from his large-scale illusions. These include escaping from Alcatraz, vanishing an entire airplane, and best of all, making the Statue of Liberty disappear.

Apollo Robbins is considered a specialist in pick-pocketing, misdirection, and psychology. Referring to himself as the Gentleman Thief, he steals from any audience member only to watch their amazement as he returns their items.

Lance Burton performed over 15,000 shows for five million people in Las Vegas, the magic capital. He had some impressive escapes and deceptions up his sleeve and was considered the best family act in town.

Surprisingly, every year, more books are written about magic than other performing art, and these are sold in specialized stores dedicated to magical performers.

There are 19 basic effects of magic.

The effect of production is when something is made to appear, without an evident clue about the source.

The vanishing effect is when something is made to pass from sight, or simply vanish, by seemingly unnatural means.

When a person or an object is invisibly shifted from one place to another, it is called transposition.

Transformation is, as the name implies, the change of a person or object's identity, color, size, shape, or character.

When the subject is wholly or partially destroyed and eventually restored to its original condition, the effect is restoration.

If an inanimate object is mysteriously made to move, it is referred to as animation.

Similarly, when the person or thing opposes the laws of gravity, it's the anti-gravity effect.

If you see a magician with a mysterious power of magnetism, it's the effect of attraction.

With the effect of prediction, the future is foretold.

Sympathetic reaction is the reaction of two or more persons or objects displaying sympathetic accord, in tune with each other.

Invulnerability leads to resistance or proof against injury.

When there is a show of normal physical rules or reactions being contradicted, it is because of a physical anomaly.

Spectator failure leads to a spectator being unable to accomplish an evidently simple objective, indicating that there is a mysterious power at play.

Control is achieved when the mind of the performer appears to dominate an animate or inanimate subject.

When the identity of something or someone is discovered, it's the effect of identification.

When the performer supposedly reads the mind of another, this is thought reading.

On similar lines, the projection of thought from one person to another is thought transmission.

What is Eldritch magic?

Eldritch is an old word that means supernatural. This magic is the darkest magic ever used in the world. It's said that hideous beings that came to Earth to destroy this world, created this. They were pushed back by the gods and dragons. Doctor Strange of the Marvel Cinematic Universe is a known user of Eldritch magic.

What is Arcane magic?

This is a type of magic that allows one to cast spells using their innate magical energies. Apart from divine and psychic magic, Arcane magic is the third type of magic. These spells create more dramatic and destructive effects than divine spells.

What is Primal magic?

The Primal magic tradition is linked with nature and instinct. The magic is derived from the six enormous, powerful entities of the natural world; Sun, Moon, Stars, Earth, Sky, and Ocean. It is a primal power that manifests itself as elemental forces.

What are the branches of magic?

The branches of magic are defined by the power that they provide. Each branch offers its own set of abilities or enhancements for a mage. Magic practices include divination, astrology, incantations, alchemy, sorcery, mediation of spirits, and necromancy.

Where does magic come from?

The word magic comes from the Greek word Mageia. Persian priests called magish and Greek magoi were the first ones to perform any magic acts.

What was the first magic in the world?

The first recorded magic act was by the magician Deidi in Ancient Egypt, in 2,700 BC. He is known for his cups and balls magic tricks.

Jean-Eugene Robert Houdin is considered the Father of Modern Magic, who moved magic tricks from streets and circuses to stages in the 1880s.