Roman Soldier Facts: Read About One Of The Strongest Armies Ever | Kidadl

Roman Soldier Facts: Read About One Of The Strongest Armies Ever 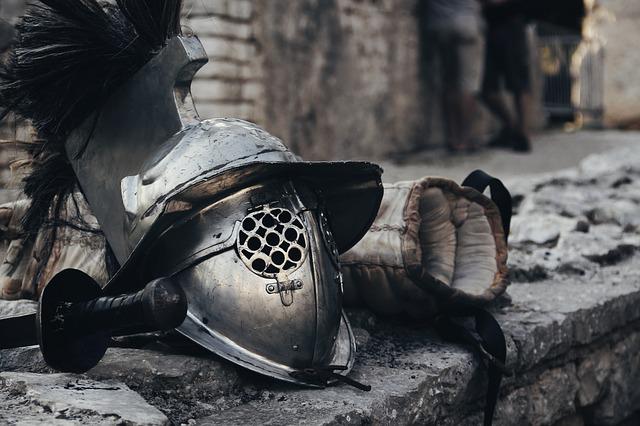 The Roman army was the ancient world's most deadly and powerful military force.

It helped rule over a vast empire and conquered many throughout the world, from Britain to the Middle East. At its height, the Roman army was armed with a force of half a million soldiers. Life was often difficult, and demands for Roman soldiers on the ground were high.

Life for a Roman soldier was not easy. Daily marches could cover up to 30 mi (48 km), faults were punished with brutality, and despite the success of the Roman army, the possibility of death or injury was always present.

Legionaries and auxiliaries were the two primary categories of ancient Roman soldiers. The former was a Roman citizen, whereas the latter was not. A Roman soldier could advance through 12 main positions, the highest of which was Legatus Augusti pro praetore, the military governor of an empire province. Gladius, pugio, and pilum were the primary weapons carried by Roman soldiers. They also wore a shield known as scutum and a helmet known as galea.

Roman soldiers were subjected to severe penalties known as 'decimation' if they were found guilty of breaking their rules. Roman soldiers were prohibited from marrying while serving in the army. Gaius Julius Caesar, Gnaeus Pompeius Magnus, and Marcus Antonius are among the most prominent generals of ancient Rome.

The accomplishments of the ancient Roman soldiers were innumerable. They were such a strong force that they won a significant number of wars over the century through their vigor and strength. Through their conquests and battles, they successfully annexed a large part of the Middle East as well as other regions.

Rome had a powerful military under both the Republic and Empire, and it was involved in hundreds of battles with other powers. Many of these wars were massive and resulted in the deaths of tens of thousands of people. These wars also led to significant territorial gains and catastrophic losses for the expanding Empire. Rome's army of professional warriors was famous across the ancient world, even if they weren't always victorious. Here are some famous battles fought over the century:

The Battle of Silva Arsia in 509 BC: To reclaim his throne, deposed king, Lucius Tarquinius Superbus, joined forces with Rome's Etruscan foes. The Republic's founder, Lucius Junius Brutus, was assassinated during this war.

The Battle of Heraclea in 280 BC: Concerned about Rome's expansion into southern Italy, Pyrrhus lead a group of Greeks to battle the Romans. This was a significant fight in military history because it was the first encounter between the Roman Legion and the Macedonian Phalanx. Pyrrhus prevailed, but he lost so many of his finest warriors that he could not battle for long.

The Battle of Agrigentum in 261 BC: This battle marked the beginning of the Punic Wars, which would go on until the second century BC. After a lengthy siege, Rome won the day and drove the Carthaginians away from Sicily. It was the first Roman triumph outside of Italy.

The Second Punic War in 218 BC: Hannibal, the famous Carthaginian commander, astounded everyone by undertaking an impossible land expedition from Carthage to Italy. A Roman military of approximately 90,000 soldiers was annihilated due to his clever tactics. However, Hannibal could not use his triumph to launch an attack on Rome, and the major military changes that the tragedy prompted strengthened Rome, instead.

The Battle of Carthage in around 149 BC: A two-year siege resulted in the city's destruction and the enslavement or death of most of its residents. Scipio, a Roman commander, is regarded as one of the world's greatest military geniuses. He is claimed to have sobbed at the carnage his men had caused in north Africa.

Roman soldiers were divided into two groups: legionaries and auxiliaries. Some legionaries held Roman citizenship and were highly regarded soldiers. Auxiliaries were members of the second class recruited from the Roman Empire's peripheries and beyond. They were paid less and required to take on more dangerous responsibilities, such as standing on the front lines of military advances and fights.

The Roman military was estimated to have numbered over half a million warriors at its height. This vast number was made up of smaller groups called legions, which were made up of 4,000-6,000 soldiers. These legions were subsequently divided into smaller divisions called 'centuries', each of which had roughly 80 soldiers.

A centurion governed over centuries. Centurions are generally controlled by brutality, using a short stick or vine rod to punish disobedient troops. In 14 A.D., a centurion named Lucilius was addressed as Cedo Alternam by his troops, which meant 'bring me another'. This was a reference to his habit of breaking his rod over a soldier's back before requesting a new one.

The Roman army was victorious because they were well organized and well disciplined. Recruits were trained to march in step and move as a single unit on the battlefield, obeying trumpet signals. Their training was rigorous, and they were harshly reprimanded if they were disobedient or cowardly.

The army's backbone was made up of legions of foot soldiers who were all armed with identical armor and weapons. The Roman army utilized strict formations and devious strategies to overcome their opponents on the battleground. The legions and soldiers could take up and maintain positions even in the heat of combat because of their renowned discipline. The testudo, or tortoise, is the name given to this shape. It was designed to keep small groups of soldiers safe from enemy weapons.

What are some fun facts about Roman soldiers?

On average, a Roman soldier bore 60-100 lbs (27.2-45.4 kg) of armor and weapons. During their military duty, Roman soldiers were barred from marrying, by law. The tunic, a loose garment that was normally sleeveless and reached the knees, was the first layer worn by the Roman soldier underneath all their layers of armor. Three kinds of metal armor were worn on top of the tunic on the chest. A Praefecti was in charge of the auxiliary units of the army. Roman soldiers could take up and maintain positions even in the heat of war because of their renowned discipline.

How long did a Roman soldier serve?

Roman soldiers were expected to serve for 25 years before being given formal retirement. Given that joining the army required you to be at least 20 years old, the minimum retirement age was 45.

In contrast to modern military uniforms, the Roman army did not remotely resemble standardized army attire. A Roman soldier's armor was non-standardized, and even that manufactured in state facilities differed depending on the area of origin. Warriors would even utilize armor passed down through familial generations or purchase armor from soldiers who had retired. As a result, instead of adhering to a unified dress code, soldiers within the same legion wore various styles of armor. Ancient artifacts such as surviving garments showed that soldiers' basic tunics were made of red or undyed wool, and prominent commanders wore white cloaks or plumes.

What did Roman soldiers do?

How well trained were Roman soldiers?

The soldiers were made fit for fighting by ensuring physical fitness and strength. This is clear from their ability to march for more than 12.4 mi (20 km) every day. They were also capable of making such journeys while wearing full armor and carrying heavy weapons and equipment, like shields and swords.

Aside from physical fitness, Roman soldiers were also trained for specialized tasks. Some were expert archers, some were talented with operating gigantic catapults, others were skilled with giant crossbows, and yet more were trained in fighting on horseback. Given the scores of Roman troops, which numbered in the millions, they were a formidable force to be reckoned with.

If the enemy fired upon them with arrows, they would utilize their shields to defend themselves by encircling their bodies with their shields. This configuration was called the turle. Short swords, daggers for stabbing, and long spears were frequently used in war. Roman soldiers also wore armor and carried a shield for protection.

From the woodlands of Germania to the stony plains of the Greek peninsula, these tactics were basic yet varied enough to combat various foes in various terrains. For centuries, the Roman army was the cause of the Roman Empire's existence.

How tall was a Roman soldier?

What is a Roman soldier called?

The Roman soldiers were called legionaries.

What type of soldiers formed the major part of the Roman army?

The legionaries, who made up the major part of the Roman army, were drawn exclusively from Roman citizens. Many people in Italy, Spain, and Gaul (France) were Roman inhabitants by the first century and were allowed to serve.