63 Times Square Facts To Know Before Planning Your Visit | Kidadl

63 Times Square Facts To Know Before Planning Your Visit 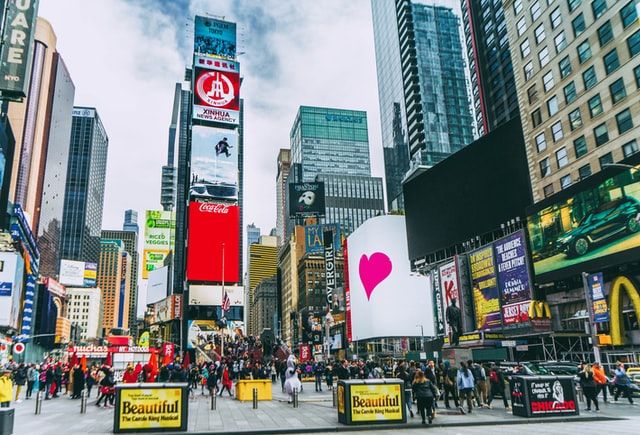 Formerly known as Longacre Square, Times Square in New York City is one of the most visited places in the world.

Often known as the ‘crossroads of the world,’ Times Square is a site that has been represented numerous times in movies and literature. The iconic place is frequented by thousands of people each day who come from all over the globe.

The vast number of theatres along Broadway, in Lincoln Center, and the Theater District is one of the key reasons for Times Square's popularity. Award-winning plays and musicals are performed throughout the year. The busiest time in the area is during annual celebrations, especially New Year's Eve.

Read on to learn more!

Times Square is a very important place in New York not only for its historical significance but also for its ability to bring about a confluence of cultures from citizens of many countries.

About 360,000 pedestrians visit Times Square each day which means more than 131 million people pass this location per year.

Times Square is a major source of income as the wall of more than 50 billboards generates an amount greater than $20 million each year.

The NASDAQ sign, the largest LED sign in the world is located in Times Square, which is 120 ft (36 m) tall.

The only two instances of the New Year’s Eve ball drop not occurring was in 1942-1943 during the Second World War.

Millions of people watch the ball drop every year, either directly from Times Square or via live telecast on television channels.

2,688 Waterford Crystals are used to make the New Year’s Eve ball each year.

Before 1904, it was known as Longacre Square, which was renamed after the Times Building was erected. It was the headquarters of The New York Times.

Times Square New York has been the site of many famous events in history. We have compiled a few of them for you.

The first electrified advertisement came up in 1904 at Times Square, specifically on the side of one bank located at the corner of Broadway and 46th Street.

In the '30s, the area became infamous as criminal activities rose after the Great Depression.

On December 4, 2008, Times Square became home to the first ecological billboard that is powered by solar and wind energy.

The soldier kissing a nurse is one of New York’s most iconic images. It was taken in Times Square.

Alfred Eisenstaedt who was a photographer working for Life Magazine, took the unforgettable image after the Second World War came to an end.

About 2 million people gathered at Times Square on August 14, 1945, to celebrate the United States' victory in World War II.

It remains a mystery about the identities of the subjects in the frame that is a widely popular motif used in many movies centered in New York.

One Times Square is the address of the giant billboard that we see today.

It was only after the Lehman Brothers bought the house in 1995 from the New York Times that advertisements began showing up on it.

In the mid-1900s, Rudolph Giuliani increased the security of the area and reduced crime to attract more tourists and elite establishments.

Times Square became a smoke-free region in 2011 as a plan to make it more environmentally friendly.

A fine of $50 is issued to anyone breaking this rule.

The brightness from the neon advertisements in Times Square makes it a land of eternal sunshine even after sunset.

It is one of the only places on earth that can be seen from outer space due to the billboards showing advertisements.

According to the law, Times Square buildings should have minimum display lighting to preserve their reputation of glitz.

Although it has the word ‘square’ in its name, Times Square is not a geometric square.

The Midtown Manhattan place is closer to the shape of two triangles with the Broadway cutting it diagonally.

The Wall Street Journal says that an LED sign at the place can cost anywhere between $1.1-4 million in a year.

The Marriott Marquis Hotel in Times Square is famous for its 45-story lobby.

New York’s only revolving restaurant, from where you can get a 360-degree panoramic view of the city skyline, named 'The View' is present inside the Marriott Marquis.

Times Square’s buildings have a unique regulation that the owners have to display illuminated signs on their properties.

The reputation of the area as a cosmopolitan environment of glitz and glamour can be ascertained from this fact alone.

Movies like 'Midnight Cowboy' and 'Taxi Driver' have shown a darker side to Times Square.

You will find people dressed up in superhero and cartoon costumes all over Times Square.

The area became the center of the Carriage industry in New York in 1872.

In 1937, the northern triangle of Times Square was dedicated to Chaplain Francis P. Duffy and is known as Duffy Square.

The National Register of Historic Places lists both the Duffy Statue and Times Square.

Let's read about some famous attractions of the place.

The place is a cultural hub of upscale hotels, music halls, and theatres.

Times Square buildings are home to some magnificent eye-catching murals such as those at the subway station on 42nd Street.

Pop artist Roy Lichtenstein is credited as the creator of these murals who took inspiration from comic strips.

If you are the adventurous sort, find out the way to Bar Centrale, a hidden bar in Times Square that is frequently visited by Broadway actors.

You can watch the huge number of people rushing past you by grabbing one of the seats in the pedestrian zone.

The Times Square Church has a great choir for music lovers but it is not known by many.

If you are lucky, you can get tickets to a live taping of television shows such as 'The Tonight Show With Jimmy Fallon' or 'The Late Show With Stephen Colbert.'

The famous Madame Tussauds wax museum houses more than 200 wax statues of celebrities from all corners of the world.

The New York theater hub is located in Times Square with dozens of choices for visitors to select from.

The price of the tickets might be on the higher side but you can discounted tickets from TKTS booths which can be found on the red steps of Times Square.

You may even come across the shooting of a movie or a television show happening at Times Square.

Times Square has the best jazz clubs all over the city and you need not go to Harlem for your blues and rock also.

Since the early 1900s, New York's Theatre District has been the center of attraction in Times Square.

The Embassy Theatre houses the visitor center and museum which is free for the public.

Times Square is not a square; instead, it is divided into two triangles by Broadway, which cuts through the grid.

Many New Yorkers consider Times Square too tacky and avoid traveling to the area if possible.

There is a high chance of you getting scammed if you are unaware of the prices of commodities.

Take someone who is from the city with you, when you visit Times Square to prevent you from spending all your money.

Although it is now mostly a peaceful place with little criminal activity, Times Square was notorious after the Great Depression as one of the most dangerous areas in New York City.

The high rate of criminal activities made people steer clear of the place until the '90s when reforms brought about drastic changes to the area.

Times Square’s main attraction is not only the dazzling lit billboards but the myriad of people you might bump into while walking through the pedestrian plaza.

There is a vast majority of tourist-friendly attractions in Times Square New York making it one of the most crowded places all over the world.

Despite being mostly empty, One Time Square is wildly profitable.

A permanent sound installation is hidden below a subway gate where a textured layering of sound is played on a loop.

The glorious Loews Mayfair Theatre of Times Square has been converted to a souvenir shop.

Some of the roads of the area have been closed off and converted to 'pedestrian only.'