Why Do Sloths Move So Slow? How Do They Get Anywhere? | Kidadl

Why Do Sloths Move So Slow? How Do They Get Anywhere? 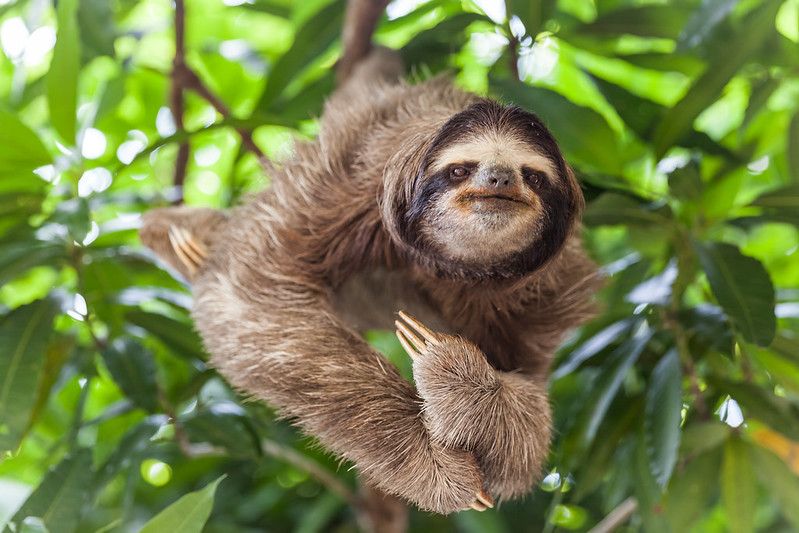 Contrary to popular belief, sloths spend only eight to 10 hours a day sleeping.

Arboreal sloths move extremely slowly on the trees and roll and crawl lethargically in sluggish areas. This characteristic of sloths is considered an evolutionary trait.

Abundantly found in the tropical rainforests of Central and South America, sloths are one-of-a-kind animals. Sloths spend a large amount of time on trees, rarely coming down from the canopy. One may find these smiley-looking docile creatures hanging upside down from a tree. These lazy-looking mysterious creatures may appear like short-statured humans, dressed in a furry costume smiling sneakily! To some, they may even look like a walking fluff toy! But behind the facade of these fluffy creatures, zoologists still have a lot to unveil. As for now, we can answer a few questions pertaining to their behaviors. These lazy creatures can be found hanging upside down from a tree or moving around lazily in sluggish areas, gaining them a not-so-good reputation in the human world. The two very prevalent and most studied species of sloths are two-toed and three-toed sloths. These animals are basically mammals with fur that helps them keep stay warm when the temperature is very low. Their body digests food very slowly, decreasing the metabolic rate in their body.

Keep reading the article to discover more cool facts about what makes sloths so slow. To know more fun facts about animals, you may also check out our pages on why do animals hibernate and why do chinchillas take dust baths.

How slowly do sloths move?

Sloths are very slow animals. Irrespective of the temperature of their surroundings, sloths are homeotherms. Their body temperature remains constant just like other mammals. Their surviving ability is considered an extraordinary feature by researchers. The slow movement of sloths is an evolutionary feature. This might be news to you but sloths move slowly because of their extremely low metabolic rate where it takes them up to a month to digest a single leaf. This also results in the generation, and in turn consumption, of less energy.

The slow movement of sloths is a trait these mammals have adapted to survive in the wild. Unlike monkeys, they do not have the ability to run fast away from predators. So one may think how do these animals survive in the wild? It is their ability to camouflage! These mammals camouflage themselves in trees and amongst branches in the Cliffe to hide from predators such as big cats like jaguars, panthers, and big birds like eagles, ocelots. Their ‘slow life’ may be considered a regressive trait by us, but it is actually a strategic way of living. On average a sloth may be able to move 41 yards (37 m) per day which is approximately half the area of a football field.

The slow movement of sloths is a way of life for them. Sloths do not have the ability to move fast, not ever! They have a very slow metabolic rate which is the reason why this species moves slowly. A slow metabolism equals slow movement, which in turn gives them more years to live unlike other average animals of the wild.

Since sloths move slowly on trees they are even slower on the ground. They camouflage to hide from predators and protect themselves from any sign of danger. But studies show that just like how the slow movement of sloths is a boon for surviving on the trees, it is a curse when they come down on the ground to poop. This is because when they move down on the ground to poop they are exposed to predators of the wild. They become vulnerable to big cats such as jaguars. Around 50% or more sloths die while pooping. Most of these sloths are not able to climb back on the tree when they spot a predator and then they become easy prey in the process.

How do sloths survive when they move slowly?

Survival in the habitats of the wild is a difficult task if the animals do not have a proper strategy to survive. Every animal has some strategy and some unique evolutionary feature that allows them to survive and breed.

Smiley-looking sloths move slowly, retaining energy while partially drifting from homeothermy. In the wild, sloths mostly depend on camouflaging themselves on the trees in between the branches. This way they are able to hide from the predators of the sky such as big-sized eagles. Besides, they are only vulnerable when they are on the ground. But even then, sloths move slowly, appearing as if they are inanimate creatures that cannot be fed upon, and in this way, they are somehow able to protect themselves from predators. Apart from this, they are able to protect themselves against predators making use of their sharp teeth and claws. They grow green algae on their fur to camouflage from predators when on the ground.

What is the life expectancy of sloths?

The life expectancy of an organism is dependent on many factors. Some survive well in their natural habitat, while others who live between the predators evolve with extraordinary features for self-defense. While the pace is associated with a way of escaping threat and thus surviving, the slow pace has its own benefits.  Sloths sleep for around 8-10 hours a day and spend minimal energy on movement, which allows them to survive on a low-calorie diet.

Sloths have extraordinary longevity of around 20-23 years. Some may consider these numbers as less, but for wildlife, it is a pretty good range. Sloths are able to camouflage well on trees and appear like they are a part of the tree. This way, they are able to escape from the sharp vision of the predators. Their slow metabolism is a boon for them and these sloths have evolved well to make the most of it. This slow metabolism is also a reason for a very short time of mating between the male and the female sloths. Quite interestingly sloths mate in just five seconds. Researchers suggest that this also plays a vivid role in the increased life expectancy of these docile creatures. Female sloths give birth once every six months. Two-toed sloths generally live for around 20 years. While the three-toed sloths are able to live for around 25 - 30 years.

What is the difference between two-toed sloths and three-toed sloths?

There is a clear visual difference between a two-toed sloth and a three-toed sloth. These monkeys in slow motion are one-of-a-kind smiley creatures stealing the hearts of many at first sight.

The ancestors of sloths were considered dangerous predators capable of inflicting a fatal attack on their rivals. They were considered to be large-sized animals possessing an aggressive nature. But the sloths of the modern era are somewhat docile animals. But this does not mean they do not attack their prey well. On getting threatened, they use their sharp canines to inflict pain on aggressors. Besides, the grave difference between two very famous species of Sloths is that two-toed sloths possess two toes on their front and three toes on their hind limbs. While three-toed sloths have three toes with sharp claws on both their front and hind limbs. Sloths use their limbs to hang on the trees and feed on the leaves on the branches.

Here at Kidadl, we have carefully created lots of interesting family-friendly facts for everyone to enjoy! If you liked our suggestions for why do sloths move so slow then why not take a look at why do cows wear bells or three-toed sloth facts.