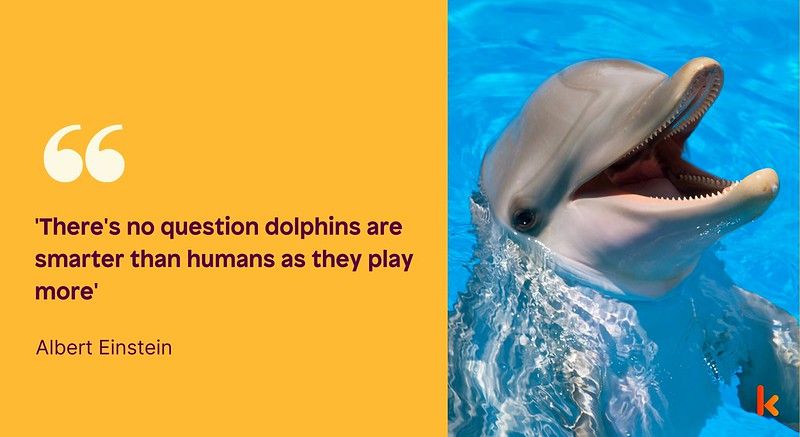 Dolphins are social mammals that can be found everywhere.

Fish and other small animals make up the majority of the diet of smaller dolphins. Dolphins have varying life spans, but the common bottlenose dolphin has an incredible lifespan of 50 years.

Vets can estimate a dolphin's age by counting the rings within each tooth. One growth ring denoted one year of life.

Dolphins are mammals that live in social communities known as pods. A pod may contain as few as two dolphins or as many as fifteen. In open ocean water, several pods may band together for a few moments or hours.

Some dolphins are lying motionless on the water's surface while they snooze. Each side of a dolphin's brain sleeps for around four hours daily.

These happy dolphin quotes are ideal if you're seeking some positive energy to brighten your day.

"Dolphins are social mammals, capable of enjoying their lives. They form close bonds with other members of their group."

"The voice of the dolphin in air is like that of the human, in that they can pronounce vowels, and combinations of vowels."
- Aristotle.

"Curiously enough, the dolphins had long known of the impending destruction of the planet Earth and had made many attempts to alert mankind of the danger; but most of their communications were misinterpreted as amusing attempts to punch footballs or whistle for tidbits, so they eventually gave up and left the Earth."

"Dolphins may well be carrying information as well as functions critical to the regeneration of life upon our planet."

"I feel at ease and, in an indefinable way, at home, when dolphins are around. I now know when they are nearby before they appear. I dream after they leave."

"But dolphins, which fill the oceans with blipping and chirping, and whales, which mew and caw in ultramarine jazz a true rhapsody in blue are hunted to the edge of silence."

"The dolphin fishing that takes place in Taiji town is an ancient fishing practice deeply rooted in their culture and their practices and supports their livelihoods."

"My first payback to society in life, was The Dolphin Project."

"The swans have returned and so have the dolphins to the Canals of Venice. Nature creates the most beautiful art."

"Cultures have long heard wisdom in non-human voices: Apollo, god of music, medicine and knowledge, came to Delphi in the form of a dolphin. But dolphins, which fill the oceans with blipping and chirping, and whales, which mew and caw in ultramarine jazz - a true rhapsody in blue - are hunted to the edge of silence."

"No aquarium, no tank in a marine land, however spacious it may be, can begin to duplicate the conditions of the sea. And no dolphin who inhabits one of those aquariums or one of those marine lands can be considered normal."

"Though pleased to see the dolphins play, I mind my compass and my way."

"Dolphin can lead us to an understanding of how to live in harmony with the twin needs of individuality and cooperation. Dolphin carries balance, peace, joy, compassion, love, and power."

"I want to finish my career as a Dolphin and win a championship here. That's what they brought me here for and that's what I came to do."

"Among the sea-fishes many stories are told about the dolphin, indicative of his gentle and kindly nature. It appears to be the fleetest of all animals, marine and terrestrial, and it can leap over the masts of large vessels."
- Aristotle.

Did you know that dolphins have exceptionally developed brains and are like humans in intelligence? The following quotes will help you appreciate how magnificent, adorable, and special these mammals are.

"The vast blue ocean is waiting for her, and this is only the beginning of her story."

"The happiness of the bee and the dolphin is to exist. For man it is to know that and to wonder at it."

"The dolphins and whales have a brain that is actually bigger in proportion to their size than we do. They are very complex. They are thinkers."

"There's no question dolphins are smarter than humans as they play more."

"I felt such a deep connection with dolphins. I felt like they were the only ones who understood me."

"One day I caught four Dolphins, how much I have gazed at these beautiful creatures as they changed their hue in twenty varieties of richest arrangement of tints."
- John James Audubon.

"The singing of flutes gently animates the dolphin, in the depths of the waveless sea."
- Pindar.

"The 'Amazon Nessie' turned out to be a malformed pink river dolphin, so not a fish, although quite fish-like in appearance."

"I have been honoured to serve the whales, dolphins, seals and all the other creatures on this Earth. Their beauty, intelligence, strength, and spirit have inspired me."

"When a dolphin swims into your life, then it’s time to add plenty of joy and playfulness into whatever you do."

"To get rid of depression, I swim with dolphins."

"There is something about dolphins. It is difficult to put into words."

(There are an incredible number of dolphin species, each with its personality and traits.)

They are socially adept, smart, happy, and playful beings that have many emotional traits in common with humans. If you've had a wonderful day at the ocean, you've captured some breathtaking dolphin images. For this reason, we have included a fantastic collection of the best dolphin quotes for Instagram.

"Teach an eagle to fly, a dolphin to swim."

"Sharks are the criminals of the sea. Dolphins are the outlaws."

"A dolphin's smile is the greatest deception. It creates the illusion that they're always happy."

"The singing of flutes gently animates the dolphin In the depths of the waveless sea."

"Dolphins are not automatic air-breathers like we are. Every breath is a conscious effort. If life becomes too unbearable, the dolphins just take a breath and they sink to the bottom. They don't take the next breath."

"When it comes to marine life, our existence depends upon their existence."
- June Stoyer.

"If I could get any animal it would be a dolphin. I want one so bad. Me and my mom went swimming with dolphins and I was like, 'How do we get one of those?"

"My dream is to have a house on the beach, even just a little shack somewhere so I can wake up, have coffee, look at dolphins, be quiet and breathe the air."

"Dolphins: animals that are so intelligent that, within a few weeks of captivity, they can train a man to stand on the edge of their pool and throw them food three times a day."

"More than anything, it was the blue dolphins that took me back home."
- Scott O’Dell.

"Like a dolphin, I am graceful, powerful, and compassionate."
- Jonathan Lockwood Huie.

"Don’t trust blindly. If in shark-infested waters, don’t assume the fin coming toward you is a dolphin."
- Mary Russel.

"Dolphins are sunflowers of the water. They adore the Sun, they love the ocean and are kind to the land. They remind us to stay playful, keep our inner child safe and stand by loved ones."
- Reena Doss.

"Ducks are sweet, crows are intelligent, but I prefer dolphins because they are both sweet and intelligent."

“The vast blue ocean is waiting for her, and this is only the beginning of her story.”
- 'One White Dolphin', Gill Lewis.

Did you know that dolphins possess some of the most sophisticated acoustic abilities? Whistles, clicks, screeches, squeaks, grunts, barks, groans, and yelps are just a few of the noises they produce.

If you enjoy the sea and its inhabitants, you will appreciate these amusing dolphin quotes.

"Never trust a species that grins all the time. It's up to something."

"You can't get a dolphin. What are you gonna do, like, put it in your pool?"

"To the dolphin alone, beyond all other, nature has granted what the best philosophers seek: friendship for no advantage."

"I invite you to entertain some new beliefs about dolphins [that] these Cetacea with huge brains are more intelligent than any man or woman."

"Dolphins have no part in this dispute with Iran."

"I just tell people I'm a dolphin trainer. It's better for everyone."
- Matthew Walker.

"Out at sea for a year, floating free from all fear. Every day blowin’ spray, in a dolphin’s smile."

"Imagine a dolphin dancing in the sky. Let it dance with joy. Think of yourself at the bottom of the ocean watching."
- Yoko Ono.

"Each minute wasted with a shark is a missed opportunity to enjoy being with a dolphin."

"I pitched the idea that SpongeBob and Patrick learn a swearword. Everyone said no. I couldn't even use a bleep. So I used a dolphin sound instead."

"There’s about as much educational benefit studying dolphins in captivity as there would be studying mankind by only observing prisoners held in solitary."

"I've never understood the 'things to do before you die' idea. If I was ill, I'd be in no mood to have a swim with a dolphin."

"In 100 years I want whales, dolphins and sharks to still be around, and the ocean to be a healthier place."
- Greg MacGillivray.

"Yeah, dolphins and monkeys basically could play chess together. Those are brilliant animals."
- Perry DeAngelis.