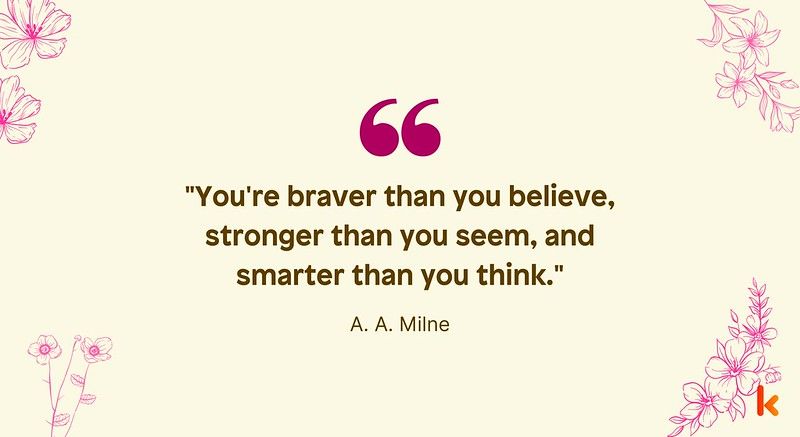 Do you feel discouraged, because things are not turning out as you had hoped?

It's completely understandable and as it turns out, most successful people and notable winners did not achieve success on their first try. They had to encounter heartbreaking obstacles and yet, they fought until the end.

Their secret to success is that they refused to become discouraged by their defeats and used their failures to become stronger and achieve their goals. Disappointment is inevitable, but being discouraged is a choice you make. However, you can gain fresh experience from failure if you choose not to be discouraged by failure.

Thomas Alva Edison failed 10,000 times before he perfected the light bulb and history has demonstrated that many notable winners overcame all their hindrances by refusing to become discouraged. Read this collection of inspirational, motivational, famous, and encouraging don't be discouraged quotes that will help you start moving past your current situation.

When you don't feel motivated, always remember that rough patches happen in everyone's life. This fact can be your source of positive inspiration and you can learn from the wisdom and strength of other people who have overcome their struggles and succeeded in life. Read these motivational quotes from famous people to overcome your struggles, and wake up feeling inspired every day.

"Believe you can and you're halfway there."

"Thousands of successful people did not achieve success on their first try, but they were not discouraged. They picked themselves up and went back at it with an even stronger, single-minded tenacity to achieve their goal."

"Many of life's failures are people who did not realize how close they were to success when they gave up."

"People who accomplish big things in life must face naysayers who try to discourage them."

"If you see someone that appears to be discouraged, talk with them, find a way to build them up, and allow them to move forward with a more positive attitude."

"Better to master one mountain than a thousand foothills."

"If you want to lift yourself up, lift up someone else."

"The best thing to do when you find yourself in a hurting or vulnerable place is to surround yourself with the strongest, finest, most positive people you know."

"Discouragement is the root of distress."

"Never bend your head. Always hold it high. Look the world straight in the eye."

"There is no failure except in no longer trying."

"What is important is to believe in something so strongly that you're never discouraged."

"You just never give up. You do a task to the best of your abilities and beyond."

"I know from experience that you should never give up on yourself or others, no matter what."

"You can never cross the ocean until you have the courage to lose sight of the shore."

Don't Be Discouraged Quotes For Inspiration

(The last key to opening the lock of achieving success is to not be disheartened by failure or obstacles.)

Life is full of ups and downs, and appreciating good times and learning from hard ones will help you achieve your dreams. Negative thinking can act as an energy drain that only discourages you from seeing the silver lining. Hence understanding negative thoughts and reframing them into positive ones can save you from getting stuck. These don't be discouraged quotes will not only uplift your spirits but will help you feel inspired whenever life hands you a sour lemon.

"Procrastination is eliminated a little at a time. Don't be discouraged; be persistent"

"I am a slow walker, but I never walk back."

"I am not discouraged, because every wrong attempt discarded is another step forward."

"Do not be discouraged if your plans do not succeed the first time. No one learns to walk by taking only one step."

"No matter what you're going through, there's a light at the end of the tunnel."

"Courage doesn't always roar. Sometimes courage is the quiet voice at the end of the day saying 'I will try again tomorrow.'"

"Success is not final, failure is not fatal: it is the courage to continue that counts."

"Failure happens all the time. It happens every day in practice. What makes you better is how you react to it."

"Perfection is not attainable, but if we chase perfection we can catch excellence."

"Ambition is the path to success. Persistence is the vehicle you arrive in."

"Develop success from failures. Discouragement and failure are two of the surest stepping stones to success."

"A problem is a chance for your to do your best."

"Just don't give up trying to do what you really want to do. Where there is love and inspiration, I don't think you can go wrong."

"When things are a disappointment, try not to be so discouraged."

"Continuous, unflagging effort, persistence, and determination will win. Let not the man be discouraged who has these."

Don't feel discouraged by failures; all you need to fulfill the dream is determination and inner strength despite what life throws your way. It is important that you focus on practicing optimism by teaching yourself and others to see the healing benefits and various possibilities, of optimism. It can be an encouragement through self-confidence, it can also help you with motivation, self-esteem, success, effort, and validation. The best view is a result of the hardest climb, so begin your day with these encouraging quotes to be the best version of you.

"Life is like riding a bicycle. To keep your balance, you must keep moving."

"Guard against drudgery and discouragement in everything you do. Know that your work contributes to your well-being, as well as that of others."

"Do not be discouraged if someone copies you. Copying is a compliment - you are doing it right. It also gives you the opportunity to grow and move beyond what is now being copied. Keep moving forward."

"We all have to start somewhere, and doing something is better than nothing at all. Start small so you don't get discouraged and give up. Remember it is all about consistency."

"The persistent winner is not discouraged by a problem - he is challenged by it."

"We've all got both light and dark inside us. What matters is the part we choose to act on. That's who we really are."

- Sirius Black, 'Harry Potter And The Order Of The Phoenix', J.K. Rowling.

"Don't let people discourage you from living your dreams."

"When discouragement comes, don't stop. Dig deep and fight it through!"

"It is never too late to be what you might have been."

"Opportunity does not knock, it presents itself when you beat down the door."

"The future belongs to those who believe in the beauty of their dreams."

"Disappointment is really just a term for our refusal to look on the bright side."

"Refuse to be disheartened, discouraged, distracted from your goals in life."

"History has demonstrated that the most notable winners usually encountered heartbreaking obstacles before they triumphed. They won because they refused to become discouraged by their defeats."

Perseverance is the secret to accomplishing your desired goals and can be characterized by three keys that ultimately unlock the door to success. Those who are perseverent never give up, stay rooted in confidence and are not limited by time constraints. Life gets tough but the tough get going! Recall these motivational don't be discouraged quotes to feel inspired in life's most challenging times.

"Living in the present moment, we feel encouraged and motivated in our lives; we sit on solid ground and are not easily knocked off our balance into discouragement and negativity."

"Perseverance is not a long race; it is many short races one after the other."

"The difference between a successful person and others is not a lack of strength, not a lack of knowledge, but rather a lack in will."

"If you feel discouraged by seeing progress in others and are tempted to give up, stop. Forget comparing yourself to others or pre-set ideals."

"Happiness resides not in possessions, and not in gold, happiness dwells in the soul."

"Don't let life discourage you; everyone who got where he is had to begin where he was."

"You can be discouraged by failure, or you can learn from it. So go ahead and make mistakes, make all you can. Because, remember that's where you'll find success - on the far side of failure."

"The struggle you're in today is developing the strength you need tomorrow."

"If every conceivable precaution is taken at first, one is often too discouraged to proceed at all."

"Do not dwell in the past, do not dream of the future, concentrate the mind on the present moment."

"Don't get disheartened one mile into a marathon."

"You measure the size of the accomplishment by the obstacles you had to overcome to reach your goals."

"When things are a disappointment, try not to be so discouraged."

"All you need is the plan, the road map, and the courage to press on to your destination."

"A failure is not always a mistake. It may simply be the best one can do under the circumstances. The real mistake is to stop trying."

"Hopelessness is an abuser, and you are its target. But what it's trying to hide from you is that there is a way out."