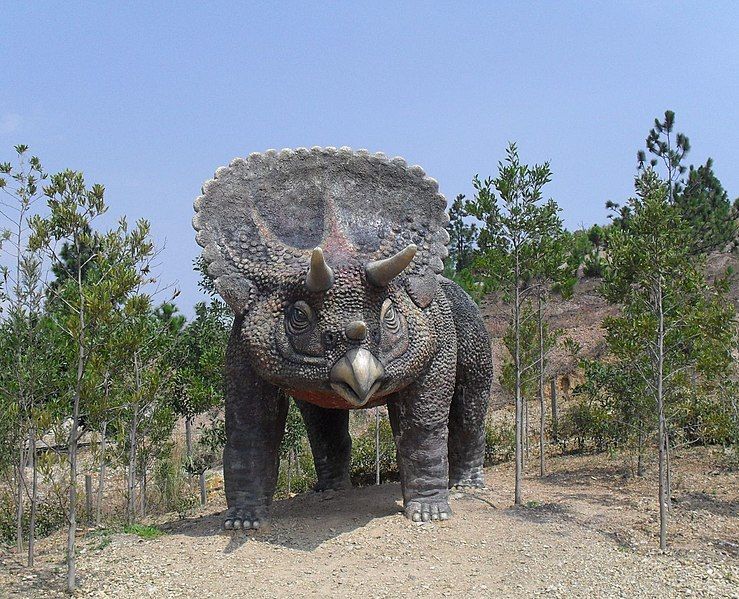 Poekilopleuron were theropod dinosaurs which existed in the Bathonian stage of the middle Jurassic era around 168-166 million years ago. P. bucklandii were carnivorous in nature and preyed on other dinosaurs. They had a lizard-like appearance. Their head was small with sharp and strong teeth placed inside their mouth. They had small hands which were not of any major use. They ran on two legs and had a really long tail attached to their body. They were theropod creatures who had hollow bones that supplied agility. Their specimens were found in France in the year 1838, they were already partial pieces, but during the second world war, the 'already half' specimen lost more pieces as it got destroyed. Some pieces were saved and are stored in museums now.

More interesting and funny facts about this dinosaur are waiting for you in the upcoming sections, which will make you amazed for sure. They are indeed amazing! For more relevant content, check out our dinosaur facts and Brachyceratops facts pages.

How do you pronounce 'Poekilopleuron'?

What type of dinosaur was a Poekilopleuron?

In which geological period did the Poekilopleuron roam the earth?

Poekilopleuron bucklandii roamed the Earth during the middle Jurassic (Bathonian) era around 168-166 million years ago. Their specimen were found in France, so it can be assumed that they roamed around the European continent.

When did the Poekilopleuron become extinct?

Poekilopleuron bucklandii were present in the middle Jurassic era around 168-166 million of years ago. Maybe they had gone extinct after that.

Where did a Poekilopleuron live?

Poekilopleuron bucklandii were carnivorous lizards who lived on land. And roamed in search of prey.

What was a Poekilopleuron's habitat?

Poekilopleuron bucklandii were terrestrial creatures who roamed on land in search of prey. Their specimen remains were found in France, so it was assumed that they lived in Europe and roamed around France and nearer places.

Who did a Poekilopleuron live with?

Poekilopleuron bucklandi were described as carnivorous dinosaur species. However, there are no specific details about them being social or solitary hunters.

How long did a Poekilopleuron live?

In the history of dinosaurs, it is seen that the average dinosaur species survived around 70-80 years. There is no exact information available on how long they lived in their habitat, but we can assume their average lifespan to be around 70 years.

All dinosaurs were reptiles and hence laid eggs in order to bring their young ones to this world. There is no exact information on how they reproduced back then, but it can be assumed that Poekilopleuron bucklandi also had breeding seasons when their species gathered and mated.

Poekilopleuron bucklandi were present on Earth during the Bathonian stage of the middle Jurassic era. Their skeleton remains were discovered in Normandy, France, and hence believed that they inhabited the continent of Europe. They were therapoda dinosaurs who had hollow bones (reduction in bone density) in order to lessen their body weight and acquiring high speed. Their fossils that were discovered were not complete. Those were destroyed partial pieces that narrated their history. The partial skeleton structure (holotype) that was found got destroyed in the second world war, and since then, replica models are used for study purposes. After being destroyed, what remained are the caudal vertebrae, cervical ribs, ribs, belly ribs (gastralia, synonyms), forelimb and hindlimb. After lots of studies on these Theropoda dinosaurs, it was told that they were big lizards who ate the meat of other herbivores. They were smaller [tyrannosaurus] with a very long tail. The formation of their forelimb was not proper. The formation was quite weak as they had small hands, which were not that useful. Being carnivores, they obviously had strong and sharp teeth for overpowering their prey. They ran on two legs and had hollow bones (Theropoda). Their physical features classification is something like, they were around 30 ft (9.1 m) in length and had a body weight of around 1 ton (907 kg). Poekilopleuron height is exactly not known.

How many bones did a Poekilopleuron have?

Average dinosaurs have around 200 bones in their body. There is no information on how many bones Poekilopleurons had. Their remains got destroyed in world war II and what survived were the caudal vertebrae, cervical ribs, basal ribs, belly ribs (gastralia), a forelimb, and a hindlimb.

They might have had a screeching voice or high-pitched voice. Like the carnivorous reptile species we see today who have a screeching voice, we can assume that Poekilopleuron bucklandi also had a similar voice.

How big was a Poekilopleuron?

Poekilopleuron was a lizard-type species that was moderately big. The amount of information gained from the destroyed holotype narrates that they were dangerous predators who had a nice size. Poekilopleuron size (wildlife) was around 30 ft (9.1 m) in length and around 1 ton (907.2 kg) in weight. The height of this Dinosauria species is not exactly known.

How fast could a Poekilopleuron move?

There is no exact information on how fast they could move, but they were fast-moving dinosaurs for sure. They had hollow bones for reducing body weight and increasing speed.

How much did a Poekilopleuron weigh?

The information gathered from the destroyed holotype narrates that they were good hunters who were 30 ft (9.1 m) in length and 1 ton (907.2 kg) heavy.

P. bucklandii were described as megalosaurid dinosaurs with clade Theropod and Saurischia. There are no specific names given to the male or female of this species. They are commonly known as poekilopleuron bucklandi.

What would you call a baby Poekilopleuron?

Like all baby dinosaurs, baby Poekilopleuron bucklandi are also known as hatchlings as they come from eggs. They might have taken care of their babies.

According to the fossil or specimen (synonyms) study, Poekilopleuron bucklandi were described as carnivorous creatures who roamed around in search of prey. They ate other herbivorous dinosaurs. They were good in length and had all equipment needed to be an ace predator. They were one of the scariest dinosaurs in dinosaur history.

Spinosaurus is considered as one of the largest carnivorous dinosaurs.

How did the Poekilopleuron get their name?

Poekilopleuron in Greek means various ribs. Actually, the genus name Poekilopleuron has two parts. The first part 'poikilos' means 'various' or 'varied' and the second part 'pleuron' means 'side' or 'ribs.' The species name 'bucklandii' was kept after William Buckland. Poekilopleuron bucklandii, Eudes Deslongchamps found the remains of this creature.

Did they hunt in packs?

There is no exact information available about them being social feeders. From the broken pieces of their body, this was only clarified that they were carnivorous species who ate the grazing dinosaurs.

Here at Kidadl, we have carefully created lots of interesting family-friendly dinosaur facts for everyone to discover! For more relatable content, check out these Puertasaurus facts or Chungkingosaurus facts for kids.

You can even occupy yourself at home by coloring in one of our free printable Poekilopleuron coloring pages.