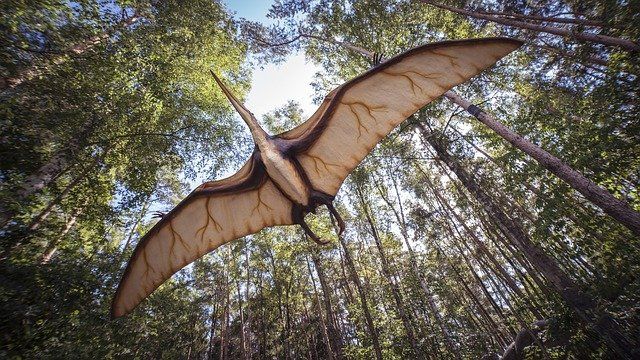 Cearadactylus atrox, an enigmatic pterosaur species was described by the researchers Leonardi G and Guido Borgomanero. The name is a reference to a state in Brazil, Ceara, and it is combined with the Greek word 'Dactylus' meaning finger, in accordance with the finger-like wing of the dinosaur. Only a skull specimen was retrieved from the Santana Formation in Brazil. A rough formation can also be found at the Mitteilungen Museum für Naturkunde in Berlin. These creatures existed about 112 million years ago during the Early Cretaceous period. Unfortunately, these fossil bones were excavated by the Italian fossil dealers who misconstructed the skull. Later on, the National Museum of Brazil researchers bought these fossil bones from the dealers and accurately constructed the skull.

Due to a lack of specimen evidence, not much information about this genus is available. However, it can be understood they were grouped under the Pterodactyloid and Pterosaur clades by the paleontologists. Furthermore, their powerful jaw and interlocking teeth reveal that these creatures were able to catch and eat slippery fish from the water bodies. Although their body length is not recorded, their wingspan length is estimated to be about 13-18 ft (4-5.5 m). According to the research by Leonardi G and Guido Borgomanero, the weight of Cearadactylus is thought to be about 33 lb (15 kg).

Keep reading to learn more intriguing facts about this pterosaur.

How do you pronounce 'Cearadactylus'?

What type of dinosaur was a Cearadactylus?

This dinosaur was a pterodactyloid pterosaur from the Santana Formation.

In which geological period did the Cearadactylus roam the earth?

The dinosaur existed during the Early Cretaceous period. It was the era of all the flying pterosaur species and also the theropods and sauropods.

When did the Cearadactylus become extinct?

These species became extinct about 112 million years ago due to natural disasters like volcanic eruptions or meteor impacts.

Where did a Cearadactylus live?

The fossils of this pterosaur were excavated from the Araripe Plateau in Santana Formation in Brazil. The holotype specimen consisting of only a skull was retrieved by the Italian fossil dealers, who unfortunately made mistakes while rebuilding the fossil structure. Proper reconstruction was later carried on by the researchers of the National Museum of Brazil, and a description of these was given by Giuseppe Leonardi and Guido Borgomanero.

What was a Cearadactylus's habitat?

From the specimen studies by Giuseppe Leonardi and Guido Borgomanero, it is found that the Cearadactylus had a kinked upper jaw, which made it a possible piscivore. Therefore, we can assume that these creatures lived around the nearby shallow water bodies from where they preyed on various kinds of fish.

Who did a Cearadactylus live with?

Although no specific data is available regarding the social behavior of this pterosaur from the Santana Formation, we can assume that they lived in small groups. Several research pieces also reveal to us that the juveniles move in big groups.

How long did a Cearadactylus live?

These pterosaurs from the Santana Formation may have lived for about 60-70 years or perhaps even more. However, the lack of adaptive radiation made them succumb to climate change and other natural calamities.

Just like all other reptiles, these pterosaurs of the Araripe Plateau also reproduced by laying eggs. Their eggs were amniotic in nature, and these were laid in small dugouts on the sand and mud. Many researchers claimed that the pterosaur juveniles were ready to move on their own just a few days after hatching out.

From the specimen retrieved, researchers Leonardi G and Guido Borgomanero were able to deduce that they had sharp interlocking teeth that were embedded in their powerful jaw. This helped them to grab and hold fish. Apart from these, the presence of a long snout and large wings were also assumed. Their robust body of 33 lb (15 kg) was able to lift off due to the hollow bones. The skull was without a crest and was about 1.9 ft (0.57 m) in length. There is a rough form of the dinosaur at the Mitteilungen Museum für Naturkunde in Berlin.

How many bones did a Cearadactylus have?

Unfortunately, the exact number of bones of this pterosaur from the Santana Formation is not known. This is because only a single skull was retrieved by Giuseppe Leonardi and Guido Borgomanero, who bought the skull bones from the Italian fossil dealers. These dealers did not reconstruct the skull bones in the correct way, and later on, the researchers of the National Museum of Brazil made an accurate reconstruction of the skull of this pterosaur species.

These pterosaur species may have communicated both visually and vocally. They produced soft grunts and other sounds. The flapping of their wings was also a part of their communication. This is probably how the relationships of Cearadactylus Atrox developed. No other content is available.

How big was a Cearadactylus?

Although we do not have the specific data on their height and length, the wingspan length and the length of the skull are put forth by the researchers Giuseppe Leonardi and Guido Borgomanero. The wingspan length was about 13-18 ft (4-5.5 m), which is much bigger than the wingspan of the Nemicolopterus species, which is about 0.8 ft (0.25 m). The length of the skull of the fossil of this dinosaur was estimated to be about 1.9 ft (0.57 m).

How fast could a Cearadactylus move?

These pterosaurs of the Araripe Plateau may have moved about with the help of their hind limbs as well as their large wings. Due to a lack of ideal specimen evidence, we cannot assume the exact speed with which these pterosaurs moved around from one place to another.

How much did a Cearadactylus weigh?

According to the various theories put forth by Giuseppe Leonardi and Guido Borgomanero, the weight of these pterosaurs was about 33 lb (15 kg).

No particular names are given to the male and female species of this dinosaur. Interestingly, no proven method exists through which researchers can actually determine whether the dinosaur fossils are males or females. However, sometimes depending on the bone structures and calcium deposits on the bones, assumptions can be made. The relationships of cearadactylus atrox to one another are not known.

What would you call a baby Cearadactylus?

A baby of this dinosaur from the Santana Formation can be called a nestling or hatchling since pterosaurs were egg-laying animals.

According to the research conducted by Giuseppe Leonardi and Guido Borgomanero, these pterosaurs from the Santana Formation had a set of long front teeth with which they were able to catch slippery fish. Their kinked upper jaw also helped them to grab the slippery fish and eat them.

Cearadactylus Atrox, an enigmatic species, was described by Giuseppe Leonardi and Guido Borgomanero as an extremely aggressive pterosaur. The relationships of Cearadactylus Atrox with each other are not well established. They were known to attack animals and birds while in flight or on the ground. Their pointed long beak and large wings terrorized other creatures of the Cretaceous period.

The name of this species, Cearadactylus Atrox, is derived from Greek and Latin terms. 'Dactylus', a Greek term, means 'finger', while the Latin term 'Atrox' means 'fearful'. The term 'finger' is a reference to the finger wing of the dinosaur. It falls under a unique group of pterosaurs which was named by Giuseppe Leonardi and Guido Borgomanero. While retrieving the remains from the dealers, the bones were heavily damaged. The front and back portion of the skull bones were glued together by the researchers, and after several pieces of study, a new genus was attributed to this creature. A formation of the dinosaur is on display in Berlin at the Mitteilungen Museum für Naturkunde.

What type of teeth did Cearadactylus have?

These species had sharp teeth embedded in their long powerful jaws. The front of their snout, as well as the intersected teeth, formed a trap-like structure in which they were able to capture their prey. The skull fossil of this dinosaur showed evidence of these interlocking teeth that were able to hold and crush a wide range of fish. No other content is available regarding their teeth.

What was the wingspan of Cearadactylus?