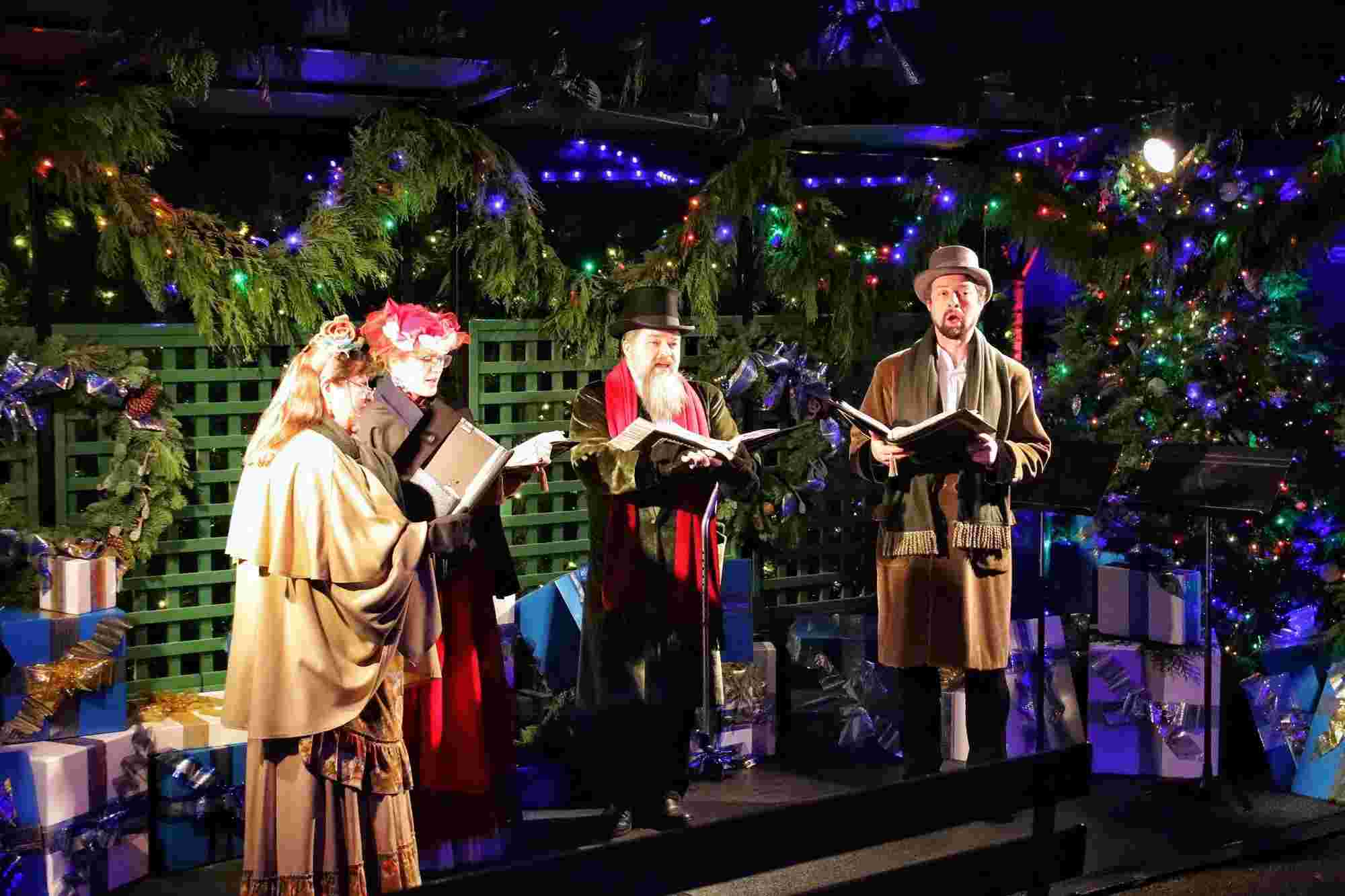 Did you know that 'Jingle Bells' was the first song performed in space?

But do you also know that 'Jingle Bells' is not a Christmas song? Well, that’s right, the writer James Lord Pierpont wrote Jingle Bells for Thanksgiving.

Christmas-related music supposedly originated in Rome during the fourth century. They were written hymns in the Latin language, such as 'Veni redemptor gentium.' With the influence of Francis of Assisi, the trend of famous Christmas songs in regional native languages began in the 13th century. Christmas is a festival of the Christian community which is celebrated in order to commemorate the birth of Jesus Christ. Christmas is celebrated every year on December 25, following the religious traditions and customs all around the world.

Families celebrate Christmas in various ways all across the world.  The traditions include giving gifts to our loved ones, completing the Advent calendar, watching Christmas movies, reading stories about Jesus Christ’s life and history, posting Christmas cards for distant relatives, offering special services at the church on Christmas Eve, decorating houses and Christmas trees with lights, garlands, and wreaths and of course, humming to the beats of famous Christmas songs and carols.

Christmas songs include various genres of music heard and performed during the Christmas season. Christmas-associated music can either be purely instrumental or in the form of carols or hymns with lyrics related to Jesus Christ, his life and nativity, merrymaking, gift-giving, and stories of Santa Claus. Some Christmas songs are merely associated with the winter season or Thanksgiving but are still included in the list of Christmas carols for other reasons.

A Christmas carol is religious vocal music in the form of a carol with lyrics revolving around the basic theme of Christmas, its celebrations, and the customs that are followed.

The basic difference between a Christmas carol and a popular Christmas song is that carols are sung as a religious devotion to the holy Jesus Christ, whereas Christmas songs secularly symbolize celebrations and merrymaking in the Christmas season. The songs that are now considered specific Christmas carols were actually folk songs sung at a communal level during the time of harvest tide, Thanksgiving, or even Christmas. Later, carols began to be sung in churches and, hence, became a part of the traditional Christmas customs.

In countries like Belgium, Germany, and Austria, some people celebrate Christmas by dressing children as the Three Kings who carry a star on a pole. These children go from house to house, singing traditional Christmas carols. They are often referred to as star singers. People reward them with sweets, chocolates, or money. The money collected by the children is then donated to the local church as a charity. Read the article to find out more amazing facts about Christmas music.

The original Christmas carols that were sung in olden times depicted the birth of Jesus Christ. Later on, subjects like Santa Claus and Rudolph-the red-nosed reindeer became a part of the lyrics of these carols. The first Christmas song that mentions Santa Claus was written in 1864 by Benjamin Hanby and was named 'Up on the Housetop.'

The oldest known Christmas music in the world is 'Jesus Refulsit Omnium' (meaning Jesus, Light of All the Nations). It was a Christian hymn, like most other Christmas songs. Christian hymns are well composed in the Latin language. The first hymn was written by St. Hilary of Poitiers in the fourth century.

'White Christmas' by Bing Crosby was the best-selling Christmas song in the United States, as per the Guinness Book of World Records. Also, this song became the best-selling single of all time. More than 50 million copies of the song were sold all across the world.

The song 'Silent Night' written and composed by Joseph Mohr and sung by Franz Xaver Gruber was one of the most recorded Christmas songs. As a matter of fact, the song inspired a truce during the historic World War I. In 1914, on Christmas Eve, the British troops saw Christmas trees on the German side of the war.

Mariah Carey’s 'All I Want for Christmas Is You' became one of the most recorded Christmas songs, with 13,419 recorded versions after the modern classic song’s debut in 1994.

Silent Night (2007) is a modern but classic Christmas carol cover by Josh Groban that has been sung by different artists many times, including the famous singer Justin Bieber.

Rudolph the Red-Nosed Reindeer (1993) is a song by Harry Connick, Jr. The song is enjoyed by everyone, including little kids and their grandparents.

Jingle Bells (1960) is a jazzy classic song by Ella Fitzgerald. The harmonica version of Jingle Bells became the first song ever to be played in outer space.

The Chipmunk Song (Christmas Don’t Be Late) (1958) is another famous song that is on the Christmas playlists of all generations.

Santa Baby (1953) is a sweet song by Eartha Kitt. It is the most well-known Christmas song as well as a holiday song.

Have Yourself a Merry Little Christmas (1944) is a soft Christmas song by Judy Garland.

Another famous song is 'I’ll Be Home For Christmas' (1943), which is another Crosby song that is a tribute to the fighters in World War.

Irving Berlin's 'White Christmas' still stands as the best-selling single and one of the most recorded songs, according to the Guinness Book of World Records.

'Have Yourself a Merry Little Christmas' is another famous carol by Frank Sinatra.

'The Christmas Song,' by Nat King Cole, is among the most famous classic Christmas songs.

Mariah Carey's rendition 'All I Want for Christmas Is You' is another iconic Christmas number.

In countries such as Australia, New Zealand, and South Africa, where Christmas is celebrated at the time of the summer season, they have a tradition of 'Carols by Candlelight' concerts that are held outdoors in the open at night in various cities and towns all over the country.

These concerts begin a week before Christmas and continue until New Year's Eve. The first Carols by Candlelight concert was held in Melbourne. Now, the concert is held in many cities around Australia. The concert includes performances like opera singing, pop music, theater art performances, and Christmas carols.

The audience actively participates in the singing of the carols by holding lit candles and humming along with the celebrity singers. Such concerts are also arranged at a smaller level in local churches, colonies, and municipal councils. The main concert is held on Christmas Eve or on the weekend before Christmas. A similar tradition is now followed in South Africa and New Zealand.

Christmas is a time when we let go of all our fears, discomforts, and misunderstandings and feel grateful for having our loved ones by our side. And there is no better way to convey gratitude and gratitude other than through religious singing and dancing. Christmas is the time when we get some spare moments to show gratitude and thank God for all the blessings in our lives.

Christmas music is a soundtrack to enjoyment, generosity, gratitude, and celebration. Therefore, Christmas songs are an integral part of the entire Christmas festivities and everybody loves them. Another vital significance of Christmas carols is the extraordinary tunes and lyrics that they are composed of.

In modern times, people may not dance to Christmas beats and shake their bodies out of happiness. But, the trend of caroling is religiously followed even today. With the passage of time, people have added new ideas to their beliefs and ways to celebrate Christmas, but thankfully, some of the ancient traditions are still carried on from generation to generation. Christmas caroling is one of them.

Here at Kidadl, we have carefully created lots of interesting family-friendly facts for everyone to enjoy! If you liked our suggestions for 131 Christmas music facts that will put you in a jolly mood, then why not take a look at Christmas tree facts for kids or Christmas card facts.